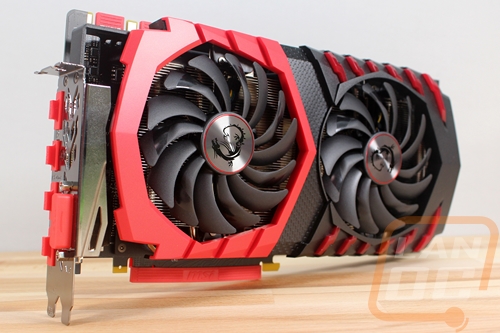 So going into this we basically knew that with the upgraded memory and an overclock the MSI GTX 11Gbps Gaming X+ would end up being faster than a Founders Edition GTX 1080 with the 10Gbps memory and slower than the GTX 1080 Ti Founders Edition. After all of my testing, that’s exactly where it fell. In most cases, it gives you a nice jump over the 1080 FE but the Ti is still at the top of the charts. So that ends up giving the 1080 Gaming X+ way more power than needed at 1080p, enough to play anything at 1440p with the settings maxed, and enough power to play most things with everything cranked up at 4k. The 1080 Ti is still the better pick for pure 4k gameplay though. This is also a great choice if you are looking to game at 1080p or to a lesser extent 1440p with a monitor in the 120/144 Hz range where you really benefit from the butter smooth gameplay at high FPS. But where I was really surprised were the details with MSIs card. When looking at the card I was a little concerned with the cooling because they didn’t really try to pack a thick heatsink in there but the results in our cooling testing spoke for themselves. This is one of the fastest cards on the market but it is running cooler than almost anything tested. The noise performance was the same as well. So in the details that matter when someone is deciding what manufacturer to go with, the Gaming X+ really stands out. MSI even included the cutest comic book to show people how to install their video card

So my complaints about the card were a lot harder to come by. While the cooling performance was great, I would still love to see cards stop getting as tall as they are and MSI has been leading that charge with the huge fans and an inch+ above the top of the PCI slot cover. I also would love to see this card be a little more color neutral to give more of a choice when theming out your PC and frankly to give people who aren’t going red a chance to use this great performing card.

As of writing this, I couldn’t find any pricing information on the new + models with the upgraded memory so I can’t speak to the overall value of the card right now. But Assuming it isn’t anything crazy, the performance numbers speak for themselves on this card. It looks to be a great pickup for anyone looking for near the top performance without stepping up to the GTX 1080 Ti. 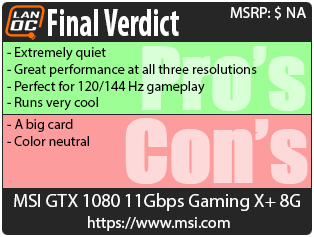 You might call him obsessed or just a hardcore geek. Wes's obsession with gaming hardware and gadgets isn't anything new, he could be found taking things apart even as a child. When not poking around in PC's he can be found playing League of Legends, Awesomenauts, or Civilization 5 or watching a wide variety of TV shows and Movies. A car guy at heart, the same things that draw him into tweaking cars apply when building good looking fast computers. If you are interested in writing for Wes here at LanOC you can reach out to him directly using our contact form.
Discuss this article
Log in to comment
Posts in discussion: MSI GTX 1080 11Gbps Gaming X+ 8G

We have 1154 guests and no members online