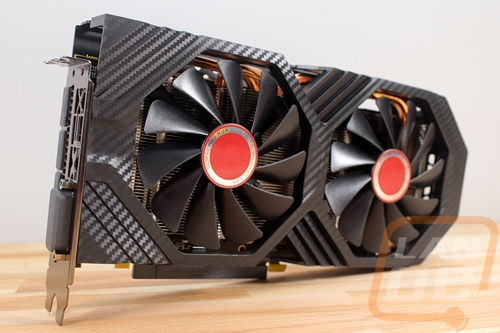 With my testing done and having taken a look at the XFX RX580 GTS lets run through the main details and the good and the bad. So like the Sapphire Nitro+ that I tested yesterday, the XFX 580 GTS should fall near the top of the RX 580’s with a relatively high overclock with XFX’s other cards coming in a little slower. That said the 1411Mhz overclock of the standard Sapphire Nitro+ ends up being a touch more than the 1408MHz of the GTS so in most results the Sapphire comes in just barely ahead. XFX mentioned to me that the GTS went through the qualification testing to actually run at 1425MHz and I really think that would have been just enough to push it up to the top of the RX580’s for performance with the exception of the more expensive LE Nitro+. That said, even with the lower clock speed, it performed extremely well in all of our tests. 1080p and 1440p are extremely playable for anyone looking at the RX580 as well as VR making this a good sweet spot card for most gamers.

The GTS did especially well in our cooling testing where it had a great fan profile to keep it running cool without having to dig in and change the settings manually. In addition to that, it matched the cooling performance at 100% of the Sapphire Nitro+. The fans were quiet even when cranked up as well. As far as performance goes really only the power usage was a concern but I think that will be an issue with all 580’s. The GTS actually pulled less than the Sapphire even.

My big issue with the card though was with the overall aesthetics. The fake carbon fiber finish was a little too much for me and the fan shroud design as a whole wasn’t my favorite. I loved that they included a backplate, but the weird part at the end of the card didn’t make much sense to me. The card could have been much shorter and they didn’t even use the space inside the end for anything. Now if you are packing the card in your PC and all you will see is the top edge, it's not going to look too bad. I just wouldn’t pick the GTS first if I had a case like our Crush project build with a side window facing the fans.

So is the XFX RX580 GTS the RX580 to pick up? In a lot of ways, it is a great card and the performance is most certainly there. It really just depends on your case configuration. If you don’t mind the styling or if you won’t see it in your build the GTS is going to make you a very happy person when gaming at 1080p and 1440p. If aesthetics is big to you, you might want to check out the XFX GTR models with the older cooler design or check out the other options on the market. 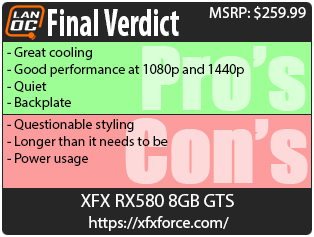 You might call him obsessed or just a hardcore geek. Wes's obsession with gaming hardware and gadgets isn't anything new, he could be found taking things apart even as a child. When not poking around in PC's he can be found playing League of Legends, Awesomenauts, or Civilization 5 or watching a wide variety of TV shows and Movies. A car guy at heart, the same things that draw him into tweaking cars apply when building good looking fast computers. If you are interested in writing for Wes here at LanOC you can reach out to him directly using our contact form.
Discuss this article
Log in to comment
Posts in discussion: XFX RX580 8GB GTS