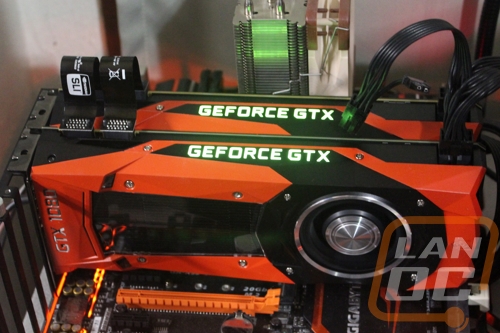 The other aspect that we have to take into account when looking at doubling up video cards is just how much power the use. Sadly this is a slightly complicated issue. Unlike a single card, the results from our normal run through in Unigine Valley Benchmark may not show the full numbers if the program doesn’t support the 1080’s in SLI and that ended up being the case. You might have noticed that the two cards ended up putting up numbers just under the RX470 in Crossfire. This is 30 FPS less than the stock GTX 1080 and it is especially weird when you remember that the GTX 980’s in SLI did work about a year ago. So at 364 watts, is that a fair number? Well not really, I actually tested the two cards in our Crush project build using 3DMark Fire Strike that is completely supported to put the whole PC under load and saw 510 watts at peak. That is with more fans, a different CPU, and a couple more storage devices than our test bench but even so I can say with confidence that the GTX 1080’s should be in the 500-watt range at load (including the rest of the PC). Now that said, that is still an impressive number, especially considering the performance.

Read the above paragraph for a better idea of power usage

So, where do the GTX 1080’s stand? As always you really have to take into account what games you are playing. Nvidia does a good job of getting game day drivers and sometimes that does include SLI drivers. But not ever game will get SLI support and as we have seen there will be games and programs that have it then later lose the support as well. Getting a second card isn’t going to double your performance across the board, but it can help in a lot of games and Nvidia does seem to support a lot more games than AMD when it comes to multi-card support. The GTX 1080 itself is a strong performing card and for someone running at high resolutions, it might be the only option to get smooth gameplay. I for example game at 4k, that’s why I went with the GTX 1080’s for our Crush build. But go in knowing that a multi-card setup is going to have its up and downs.

Normally I would really be focusing on the pricing but that’s really only when we can sometimes find better performance with a pair of cheaper cards than picking up a single high-end card like a GTX 1080. When it comes to going SLI with two GTX 1080’s you have already thrown price out the window. A single Founders Edition card like what I tested with is going to run you about $700, that’s more than a lot of people will spend on their whole gaming PC. Getting two for $1400 and a high-resolution monitor or a multi-monitor configuration to justify the two 1080’s is well beyond anything logical. That doesn’t even include all of the other high-end components you will want to go with them. But it sure as is a lot of fun to game on!