As for the XFX RX 480, like their RX 470, I really dig the all black clean look they have going. It is neutral so it will work in very build and it's not flashy in any way. I plan on doing a full article on them, but I really dig the hot-swappable fans as well. Then when it comes to performance, the XFX card, combined with AMDs latest drivers, kicked but for performance. In the non-gaming benchmarks, I was blown away by huge jumps in performance. But even in the game benchmarks and synthetic benchmarks the XFX RX 480 proved that it should give you amazing performance at 1080p, good performance at 1440p, and even good performance in VR. I wouldn’t recommend it for the ultra high-resolution monitors, but for all but the craziest setup, the RX 480 is really all you need.

Now I did have a few gripes with XFX’s card. The extra long fan shroud that makes the card an inch longer for no reason being one. Its high power draw, just like the Sapphire 480, isn’t a deal breaker but it does cause heat issues. That, of course, leads me to the point on questionable cooling performance. This same cooler worked really well on their RX 470, but this card didn’t have the same extra headroom left in it that the other RX 480’s have, even the reference cards ran cooler at 100% fan speed. Because of that, even when testing things like Valley Benchmark after a little while the fans would end up running at up to 80% fan speed. So even though it wasn’t the loudest card in my noise benchmark, with the fans running at a higher speed in game than other cards, it ended up being a noticeably loud card in game.

With all that said, is the XFX R 480 still a good buy? Well, the performance was there for sure. XFX could use a little work on the cooling side, but as long as that doesn’t bother you it is a great card. It will handle anything you toss at it. More importantly, with it selling for 239.99 right now it is in line with all of the lowest priced RX 480’s and that doesn’t even take into account the $20 rebate. Given how close it performs with the GTX 1060, that really makes it a good value. The 1060’s are currently selling for $249.99, so $219.99 for nearly the same performance is a steal.

*Followup* I heard back from XFX on the fan noise I experienced. They said that earlier cards had a more aggressive fan profile and our sample ended up being one of those. Both of the firmware revisions are available at the following link: https://xfxforce.com/en-us/support/bios-files. 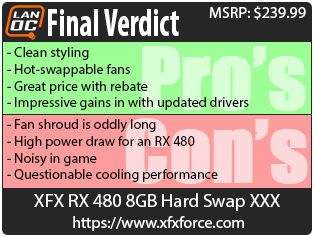 We have 1600 guests and one member online