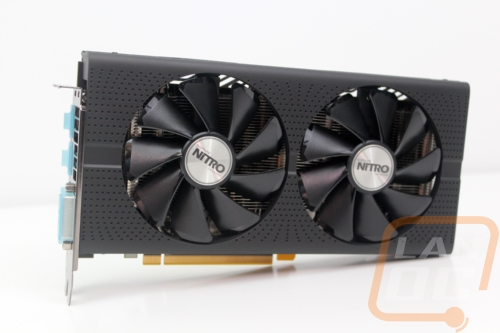 So I took a closer look at the Sapphire RX 470 4GB Nitro and put it through our full benchmark suite, how does it compare to the XFX RX 470? Well while I thought the XFXX looked good, I’m a much bigger fan of the look that Sapphire has gone with its Nitro cooler. The fan shroud is simpler and cleaner and should look great in any build. The RGB Sapphire logo up on top helps with that as well. It is simple, but being able to set it to match your build is nice. Hell, I’m seriously considering sanding off the green color from a GTX 1080 for an upcoming build simply because it won’t go with the build at all, being able to do that without damaging the card would be great to have. Like the XFX RX 470, Sapphire also has a nice swappable fan design that should help a lot with RMAs, it would be cool to see Sapphire also offering LED lit fans as an optional replacement like XFX is planning. The Sapphire card is a little taller, but not to the extreme that some manufacturers are now going too but they did put the 8-pin power connection on the end of the card to save a little height.

It was when I got into performance testing that I really saw the Sapphire come into its own. I don’t think I’ve ever seen a card with this big of a performance gap with only a 4 MHz boost clock difference. Sapphire did this by pushing a LOT more power into the 470 and it seems to almost always run at its boost clock max. That power did mean power draw 35 watts over a reference RX 480, but if you don’t mind the power usage you do get what has to be the fastest 4GB RX 470 out of the box. The power usage also meant less cooling performance with the stock profiles so keep that in mind.

Where things get interesting are when we start taking a look at the pricing. Like with the XFX, I’m not a fan of these cards being priced above the $200 price point of the RX 480 4GB cards but at least the Sapphire is actually selling for 10 less than the XFX while at the same time stomping it in performance testing. I still have more testing to do, including an 8GB RX 470 but I think I can say that Sapphire has the fastest 4GB RX 470 on the market, so if you are looking for that out of the box performance with power usage not being a concern this is the card for you! 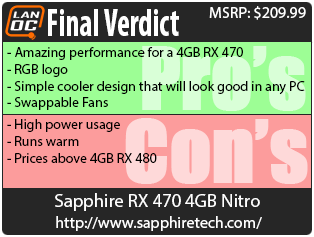 You might call him obsessed or just a hardcore geek. Wes's obsession with gaming hardware and gadgets isn't anything new, he could be found taking things apart even as a child. When not poking around in PC's he can be found playing League of Legends, Awesomenauts, or Civilization 5 or watching a wide variety of TV shows and Movies. A car guy at heart, the same things that draw him into tweaking cars apply when building good looking fast computers. If you are interested in writing for Wes here at LanOC you can reach out to him directly using our contact form.
Discuss this article
Log in to comment
Posts in discussion: Sapphire RX 470 4GB Nitro