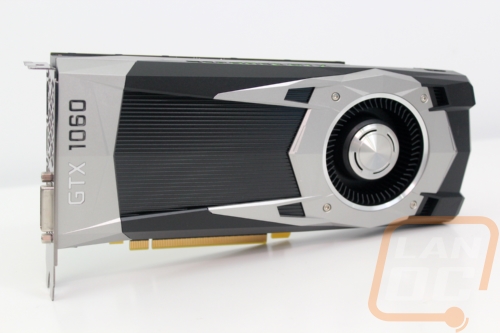 Okay now that we have gotten a look at everything, let’s take a step back and look at what our results are telling us. Nvidia said that the GTX 1060 would perform close to the GTX 980. I busted out our 980 and did the tests. What I found when going back through the results the GTX 1060 outperformed the 980 in 12 tests and the 980 outperformed the 1060 in 11 tests. I would say that is close! I did the same count with the AMD RX480 as well. The RX 480 outperformed the GTX 1060 in 6 of our tests and the 1060 outperformed in 18 tests! Most of the tests where the RX480 shines were Compute benchmarks as well as Hitman. With that in mind, I would say that the GTX 1060 is a great performing card at 1080p. Our 1440p testing showed that it can handle it but it doesn’t dominate like it does at 1080p.

I think the GTX 1060 bests shines in our power testing where none of the cards come even close. This power efficiency also translated to great numbers in cooling testing. I also wanted to talk a little about the overall Founders Edition design. I love that Nvidia went with the die cast aluminum cooler design over the cheap plastic cooler than previous reference cards had at this price point. Even just putting the reference RX480 next to the GTX 1060 is night and day for overall construction, it feels solid. I know there were some people voicing their opinions on the pigtail power connection design as well as the two empty VRAM spots. I personally don’t really feel like either of those show an overall rushed or low quality feel, the pigtail specifically had to take longer to design that to just cut a hole in the cooler and run the standard power connection. That said I do think that pigtail design is going to cause some issues for anyone who might be considering water cooling the 1060 in the future, not that I would ever want to do that personally. We will also have to wait and see if the pigtail power connection causes any other issues though I’m not foreseeing any. There are also going to be people upset at the lack of SLI on the GTX 1060 as well and frankly, it is justified, for people looking for a cheap upgrade path later on the GTX 1060 isn’t going to have that anymore.

Then we get into pricing. Here is where things get a little more complicated. Specifically, the GTX 1060 comes in at two different price points. So the card I have tested today has an MSRP of $299 where officially the MSRP for other cards is $249. At $249 these are a much better choice than the RX480 8GB that is priced at $229. The question is whether or not the aftermarket cards are going to come in at $249 at all. With the GTX 1070 and the GTX 1080, they have mostly come in close or higher than the Founders Edition cards. At $299 I still like the GTX 1060, especially when we consider the Founders Edition does seem to have a higher quality cooler. Let me be clear on this one by the way because I’m sure someone will disagree. I’m not saying that the Founders Edition cooler is the best cooler, most likely aftermarket coolers are going to cool better and run quieter. But I do think it is the best quality, the cast aluminum design is solid, especially when compared to aftermarket coolers and the RX480’s reference cooler.

I actually wrote out a long section here going more in depth into concerns with aftermarket cards potentially pushing that great $249 MSRP up but it’s clear Nvidia has hacked my PC and watches what I’m writing because not to long after they actually sent an email listing off the prices of a lot of the aftermarket cards to address this specific concern. For starters the Founders Edition will only be available directly from Nvidia. Custom cards will be the only cards available retail and at least some of the models will be at or close to the MSPR. Here is a quick list

So with all of that said, is the GTX 1060 the card to get? I think at or close to the MSRP you aren’t going to find a better deal. People looking for good compute performance are going to prefer the RX480. For myself, If I’m building a budget gaming PC focused on 1080p performance I think I’m going with the GTX 1060. The extra money that the Founders Edition costs over an RX480 8GB gets you a nice performance improvement as well as a huge difference in power usage. I’m especially excited to dive into a few of the custom cards to find out what the GTX 1060 can do with even better cooling 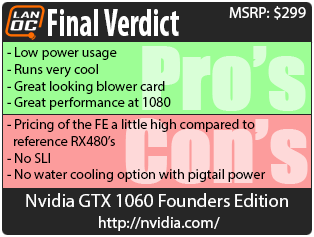 You might call him obsessed or just a hardcore geek. Wes's obsession with gaming hardware and gadgets isn't anything new, he could be found taking things apart even as a child. When not poking around in PC's he can be found playing League of Legends, Awesomenauts, or Civilization 5 or watching a wide variety of TV shows and Movies. A car guy at heart, the same things that draw him into tweaking cars apply when building good looking fast computers. If you are interested in writing for Wes here at LanOC you can reach out to him directly using our contact form.
Discuss this article
Log in to comment
Posts in discussion: Nvidia GTX 1060 Founders Edition