So now that we have put the new RX 480 through the paces, taken a closer look at it, and had a quick run through on what Polaris is all about, what do I think of the card? Well for starters, for those of you who were expecting Polaris to come in and blow away everything on the charts, I’m sorry you are disappointed. The RX 480 is a great performing card for gaming at 1080p and it is even very capable at 1440p. It’s not a chart-topper, though, what is exciting about it is its performance for the price. The RX 480 does outperform a lot of cards that are priced well above it including getting very close to the GTX 980 in performance. It also does exactly what AMD promised with Virtual Reality as well, it brings VR Ready video cards to a price point that people can afford. Sadly getting the VR kit itself is still going to break the bank, though. I'm also liking the clean look of the reference cooler, it might be plastic and frankly, I’ve been getting spoiled with the metal fan shrouds, but it's going to look good in any PC.

It’s not all perfect. I wouldn’t recommend running the RX 480 with the fan cranked up. At 100% fan speed, the fan was loud enough that my wife and I had trouble talking to each other across the room.

What it all comes down to though is the price point. We know that AMD announced the RX 480 with a $199 price point for the reference design. They did confuse things a little bit, though. The same they sent me at least was an 8GB model. The $199 price point was only for the 4GB model, so we can’t really compare the performance tested here today to that price point. The RX 480 8GB has a price point of $239. I spent a little time browsing Newegg. The RX 480 8GB is currently positioned above the GTX 970 and just below the GTX 980 in performance from Nvidia and in line in a lot of my tests with the overclocked R9 390’s. Currently, the lowest price on a GTX 970 is $245 after rebate and the GTX is $334 with a rebate. With that in mind, we know the Rx 480 is a great value compared to what Nvidia currently has going on. I also double checked on the R9 390 as well because we know it performs closely just to see if any of the discounted cards would be slipping into the same price range of the RX 480, they are as low as $259.

The RX 480 ends up being a great value card. With that, it also looks like it could offer even more value when you look at running them in Crossfire but I’m hoping to get another card in and test that out before commenting on it. What I do know though is that people who use to have to make performance sacrifices when building low budget PCs now have a great option that is going to get them great performance at 1080p, something that wasn’t possible in the past without diving into game settings and turning things down. 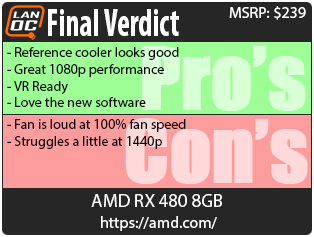 You might call him obsessed or just a hardcore geek. Wes's obsession with gaming hardware and gadgets isn't anything new, he could be found taking things apart even as a child. When not poking around in PC's he can be found playing League of Legends, Awesomenauts, or Civilization 5 or watching a wide variety of TV shows and Movies. A car guy at heart, the same things that draw him into tweaking cars apply when building good looking fast computers. If you are interested in writing for Wes here at LanOC you can reach out to him directly using our contact form.
Discuss this article
Log in to comment
Posts in discussion: AMD Radeon RX 480 8GB

We have 1773 guests and no members online