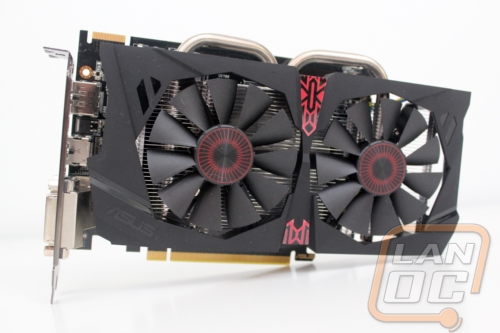 So the Asus R7 370 is available from Asus in both 2GB and 4GB models but today we are taking a look at the 4GB model. We still get the same 1024 stream processors that all R7 370’s have. The Asus is a little higher overclocked than the Sapphire I tested though. The Sapphire has a 985MHz clock speed but this Strix card should run at 1070 MHz in OC Mode or 1050 MHz in Gaming Mode. The Sapphire did have the same 4 gigs of memory though.

At first glance you wouldn’t be able to tell the difference between this card and the GTX 950 Strix that I reviewed the other day. The reason for this is because this card shares the exact same heatsink and fan shroud that the GTX 950 Strix had. I mean obviously they are both going to have that Strix look, but when I was doing all of my testing I actually had to check the serial number sticker on the back just to make sure I tested the right card. This means we have the same owl styling the red stickers on the two somewhat small fans. The black fan shroud has the rest of the face including the nose all molded into it. Up top we have the two large heatpipes that end up making this a tall card when it isn’t completely needed. I do think with this design that they should use bigger fans for even more cooling if they are going to go ahead and be tall like the cards that pack in huge fans. 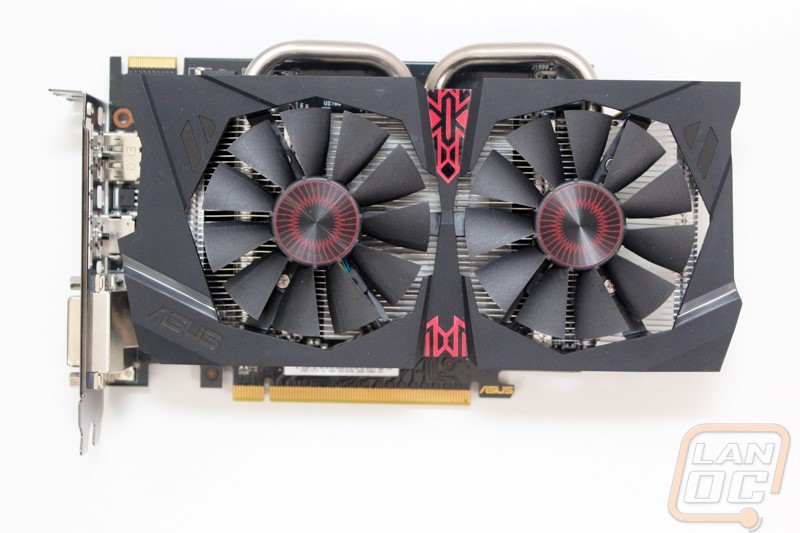 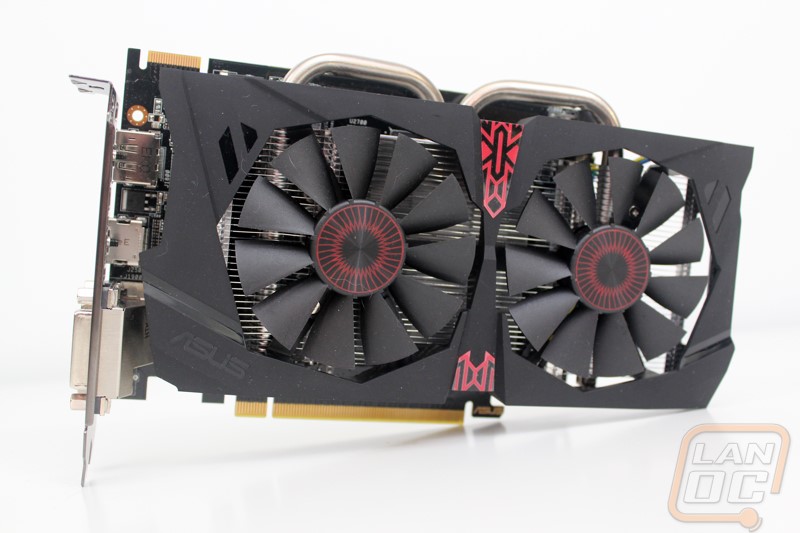 From the top and bottom views we can see really well that the entire heatsink attaches around the GPU and other than that contact is up away from the PCB on the other sides. This allows for air flow from the two PCB blowing fans. To help with the cooling this cooler uses two large heatpipes that are direct mounted in the center of the GPU to pull heat out to the outside portion of the heatsink.

The end of the Strix is completely open as well. In fact the PCB is a few inches shorter than the end of the cooler so a lot of the air blowing down in that area has free flow. For the power connection Asus put the six pin power down on the end of the card, facing out. They flipped the connection to have the clip toward the PCB and notched the PCB to fit it. This lets them get closer with the heatsink without clearance for getting your finger in to unplug the connection being an issue. 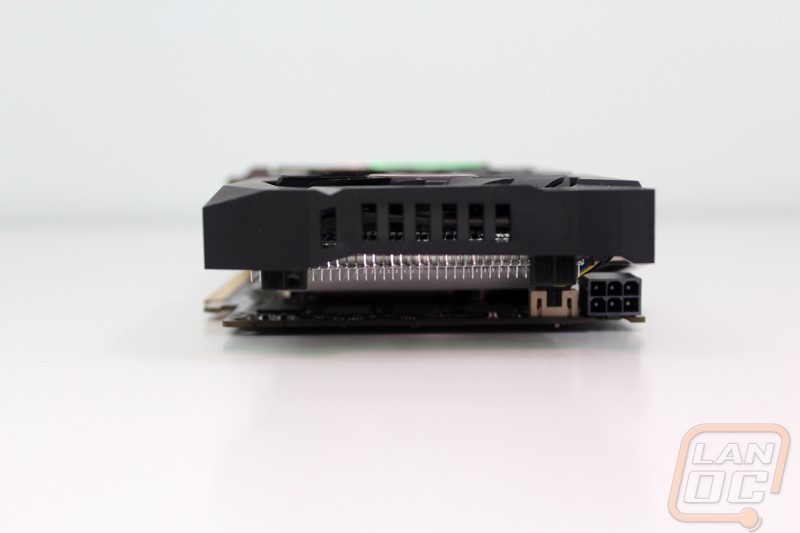 For display connections the Asus has a similar setup to the Sapphire with the exception of the placement of the DVI connections. You have a full sized DisplayPort connection as well as a full sized HDMI down on the bottom left. Then on the right are two DVI connections stacked. There is also a large amount of ventilation packed in around all of the plugs. 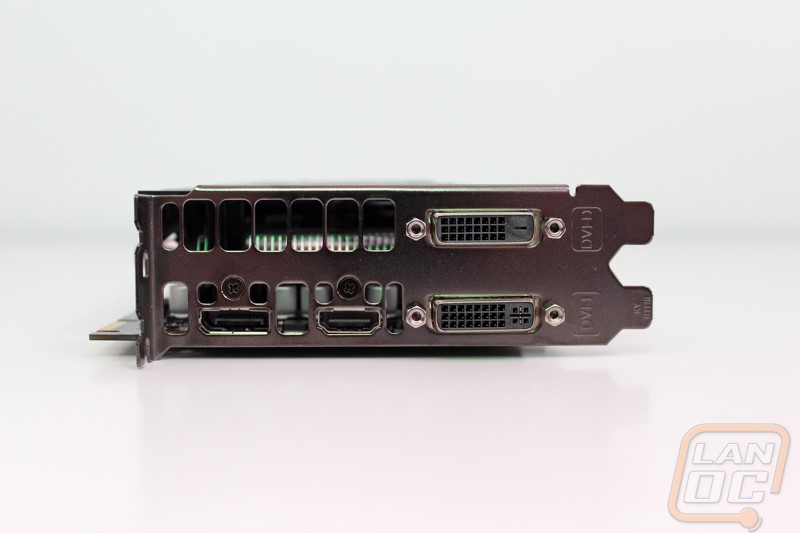 The back of the card gives a much better look at what we are working with. For starters the PCB is considerably shorter than the Sapphire and even shorter than the cooler Asus included. It’s weird to me that the PCB is also taller, especially considering there was more than enough room to add that space to the end of the card. The two heatpipes are still the two highest points on the card, but we can see that overall the card is close to an inch taller than the top of the PCI slot. There isn’t a backplate covering everything up so we do have full view of the all black PCB. There are four main screws on the back holding the cooler on around the GPU. A few years ago it was a big push for Asus to make removing the cooler to reapply thermal paste easy but seeing the warranty sticker on one of those screws tells me they don’t want people doing that anymore. This back view of the PCB also gives us a peak at the notched PCB around the power connection that I mentioned earlier. 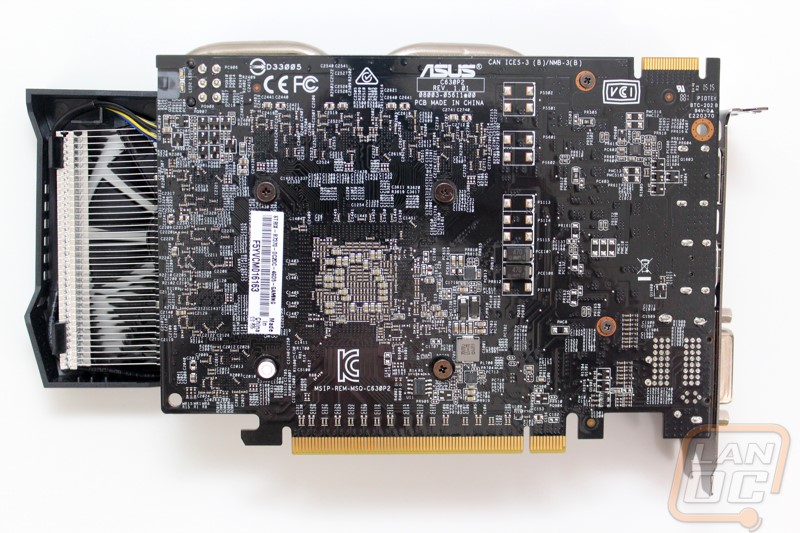