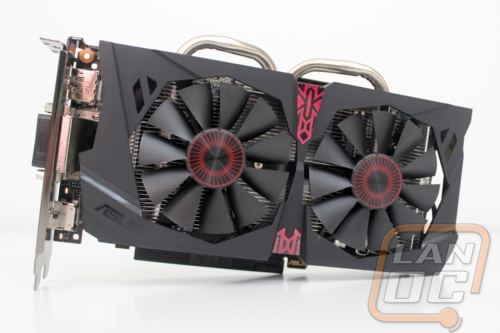 I spoke about the GTX 950 in detail earlier so before we get into the Strix’s design and photos I wanted to mention that on the hardware side of things Asus did overclock the Strix a little over the reference GTX 950 design. The reference design has a core clock of 1024 MHz and the Strix has a base clock of 1140 MHz or 1165 MHz depending on if you are running the OC mode or Gaming mode. The reference boost clock comes in at 1188MHz where the Strix hits 1355 MHz in the OC Mode and 1329 MHz in the Gaming Mode. We still get the same 2GB GDDR5 running through a 128 bit interface. The memory clock speed is 6610MHz where the reference design is listed at 6600MHz.

Where the Strix really stands out compared to a reference card is the Strix version of the DirectCU II cooler. When you look at the image below you can see the Strix Owl eyes for the fans and the fan shroud helps define the face. The overall design is blacked out with red on the eyes and around the “nose” area. The fans used are a little smaller than what I have been seeing on a lot of the other coolers recently, I don’t know if this was to design decision to keep the owl look but one benefit is the overall design is relatively short. Of course the two large heatpipes on the top nearly take away all of the height benefits though. 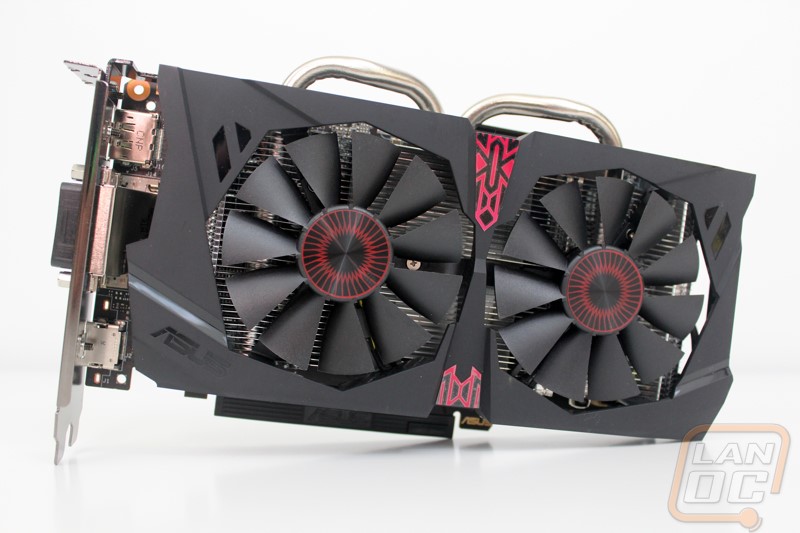 The heatsink runs around 75% of the length of the card with a little room on the right side and a lot of room on the PCI side. The heatsink design uses a direct heatpipe contact design that we can see very well from the bottom of the card. The two heatpipes are very thick and pull the heat out to the ends of the heatsink. The two fans then push air down through the heatsink and against the PCB. The fan shroud design leaves an inch of space on all four sides for the air to vent into your case after it goes through the heatsink. This does mean you need to keep that in mind and make sure your case will vent the heat in small form factor builds. 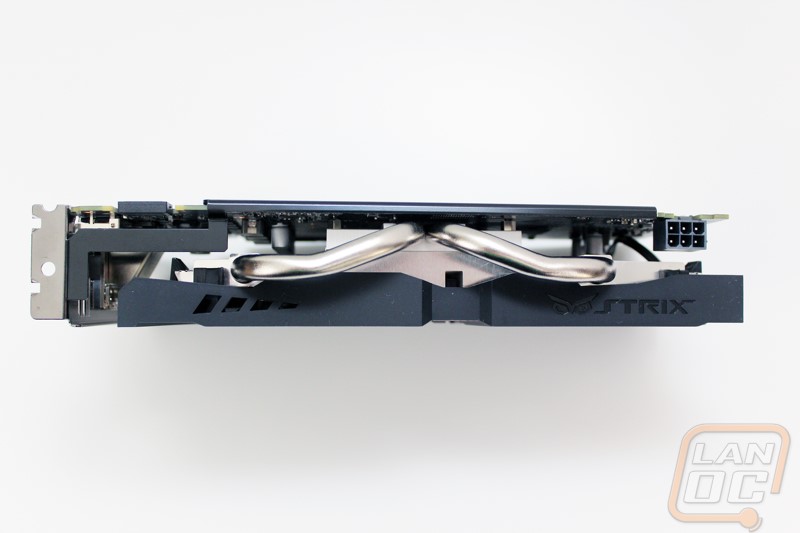 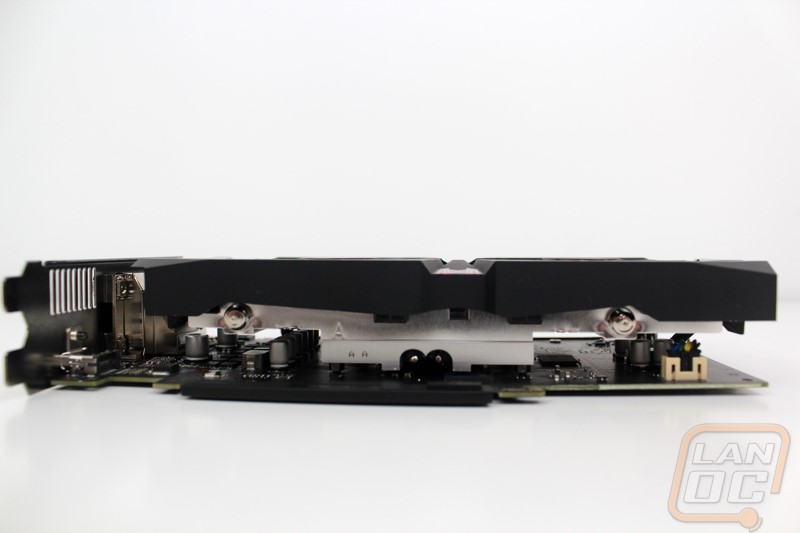 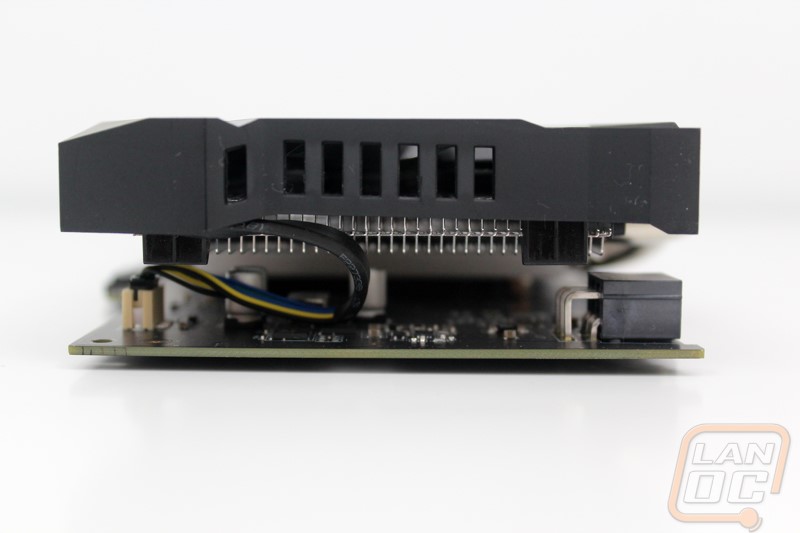 For power the 950 Strix has a single six pin power connection to help power the 950’s 90 watt TDP. Asus flipped the connection backwards and notched the PCB to fit the clip. Flipping the plug allows them to get the heatsink and fan shroud closer without having to worry about people needing to get their fingers into the tight space. 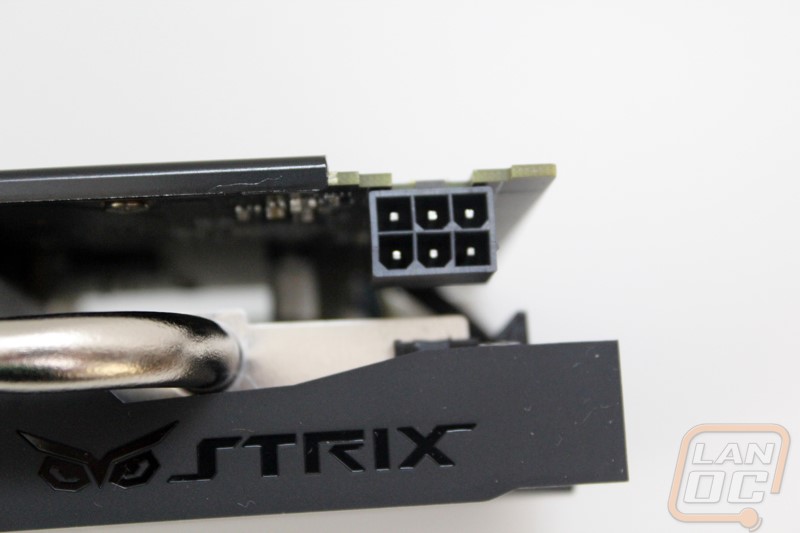 For those who might look at increasing performance later the GTX 950 does come with one SLI bridge connection that will let you run two cards in SLI. Keep an eye on the website in the near future as we have already completed SLI testing and will be posting up the results. 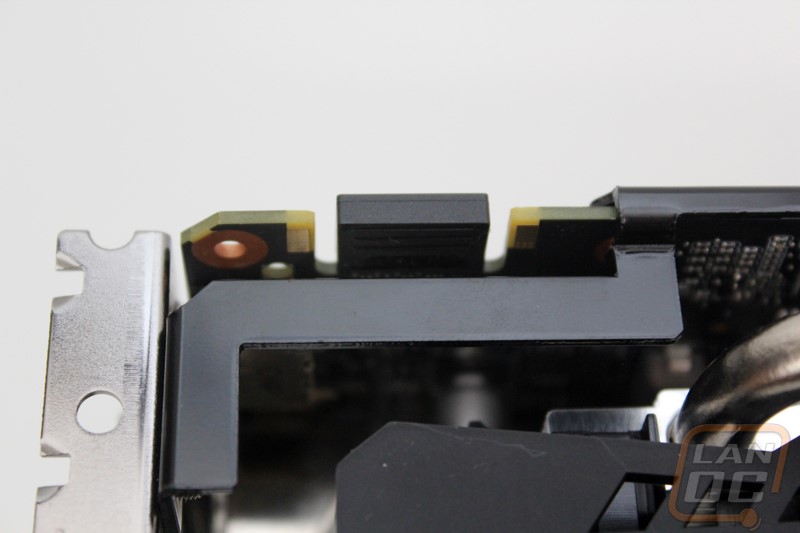 The back of the card gives us a better look at the black PCB that runs the length of the card. We can also see the notched area on the PCB that gives us better access to the power connection up top and the metal support bracket across the top that helps secure the heatsink to the card. 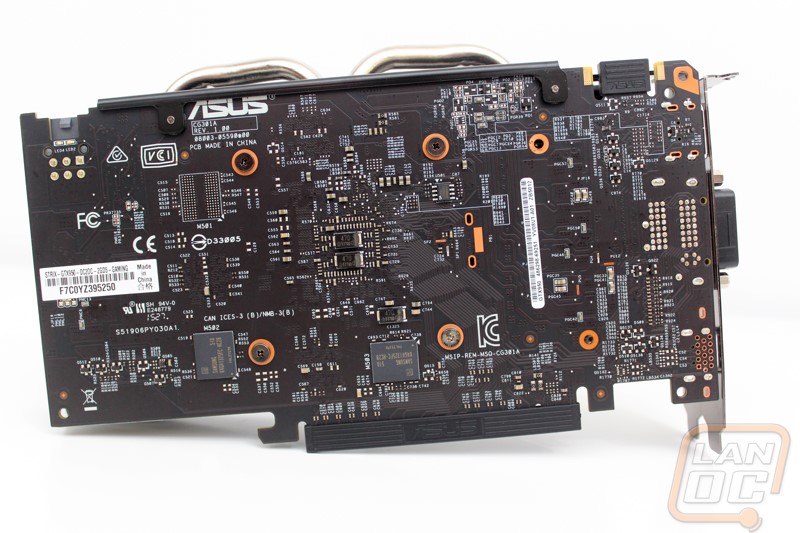 For display connections the 950 Strix bucks the DisplayPort trend that I have been seeing where most cards have 3-4 DisplayPort connections. In place of that you get one DisplayPort, one HDMI, and then two DVI ports. This is a much better option given the cards price point. Even a lot of the people buying high end cards are still running DVI and HDMI monitors and for budget PCs it will be a long time before people are replacing their perfectly good 1080p DVI/HDMI monitors and going with 1440/4k monitors that use DisplayPort. The back slot also has a little additional ventilation on both sides of the second DVI port but given the open area right behind the PCI slot I doubt much air will be going out them. 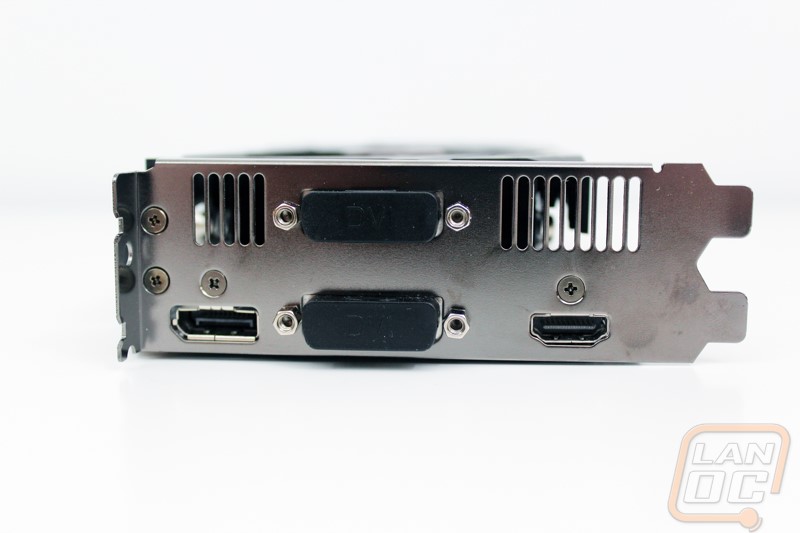 We have 1380 guests and one member online