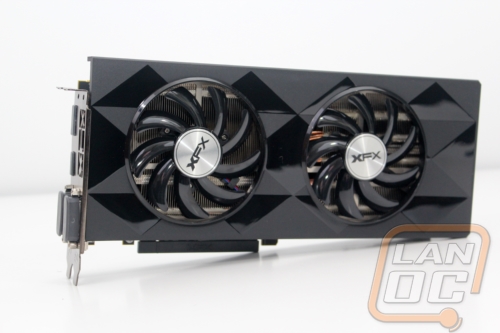 So going into today we already know that the R9 390 out performs the GTX 970 that is is priced to compete with and that the leftover R9 290X’s are also a good value at that same price point. What I really wanted to know was just how good the XFX R9 390 Double Dissipation is in comparison to the Sapphire 390. While XFX cards have performed great for us in the past, when it came down to their coolers they always have a hard time hanging on compared to their competition. This time around though the cooling performance was on par. For noise I would have preferred XFX to introduce a mode that turns the fans off at low usage like other companies but in my testing I didn’t see them turn off. The noise numbers were slightly higher than the Sapphire card that was running an additional fan even. The XFX made up for that in most of the benchmarks were its very small 5MHz GPU clock speed advantage helped it pull slightly ahead. For power draw I still marked it down for pulling a lot of power because when compared to Nvidia’s offerings it does, but the XFX did pull less than the Sapphire 390.

I was a little surprised by the new cooler design though. The past few XFX card designs have really grown on me so it was disappointing to see them move away from that to something that I’m not that big of a fan of. The angular and glossy finish is a little weird. On the plus side the blacked out design does look good. You also get a backplate as well were a lot of the other manufactures have been going away from that. I also think they need to do a little more testing ahead of launch because this cooler design was really tight around the power plugs and that shouldn’t happen.

So is the XFX the way to go? Well the slight performance advantage is nice but the fan shroud design isn’t. Where the XFX really has an advantage is as of this review it is selling for less. Because of that I think that it is the better buy and with its smaller size it will be less likely to have fitment issues as well. 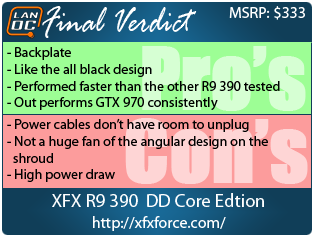 You might call him obsessed or just a hardcore geek. Wes's obsession with gaming hardware and gadgets isn't anything new, he could be found taking things apart even as a child. When not poking around in PC's he can be found playing League of Legends, Awesomenauts, or Civilization 5 or watching a wide variety of TV shows and Movies. A car guy at heart, the same things that draw him into tweaking cars apply when building good looking fast computers. If you are interested in writing for Wes here at LanOC you can reach out to him directly using our contact form.
Discuss this article
Log in to comment
Posts in discussion: XFX R9 390 Double Dissipation Core Edition