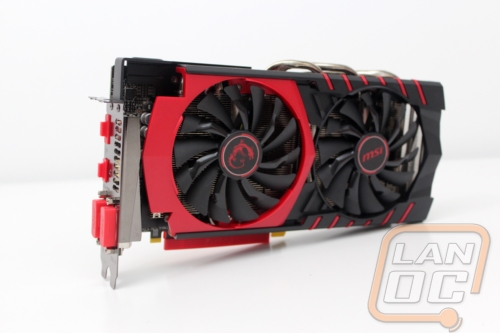 So going into the R9 380 launch we know that the 300 series cards are for the most part rehashed 200 series cards. They did go in and made a few tweaks here and there to bump their performance slightly. The R9 380 for example is based on the Tonga R9 285. The 285 is actually a great card even today, I am still running on in our Lunchbox 3 build, so I knew about what to expect coming into this. That said the 380 did see a clock speed bump over the 285 and this card had even more of an overclock over the base clock as well. So where the 285 had a stock clock of 918, our card today had a boost clock of 1GHz. So the for the most part it did outperform the original 285. The big thing I took from all of our testing was that the R9 380 is a rock solid card when playing at 1080p, our testing at 1440p weren’t as successful. But given its price it is a perfect fit for mid-range builds looking for a solid card. MSI spiced things up even more with their TwinFrozr cooler that gave us good cooling performance, kick ass styling, and nearly silent performance when gaming. In fact when you are out of game or doing low load applications the fans turn off entirely. The newish cooler design did lose the metal fan shroud that I really liked but they did make up for it by including an aluminum backplate and a backlit logo up on top.

When it comes to pricing the R9 380 Gaming 2G fell right in between the cards that performed above and below it in our testing meaning it is priced perfectly for its performance. Basically if you are in the market for a new card at around $200 this is going to be right up your alley. Bonus points because it has the styling and features you would find on a much more expensive model. 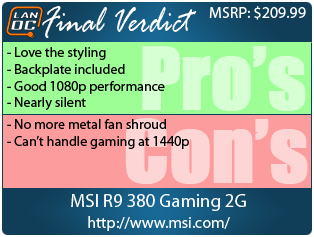 We have 1381 guests and one member online