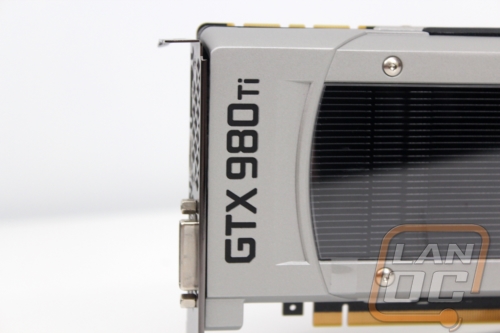 So the GTX 980 Ti is a really interesting card. Basically Nvidia has cut out some of the CUDA cores out of a Titan X and halved the vRAM. Normally if someone said they cut out CUDA cores and half of the vRAM I would be concerned but frankly the Titan X is a monster. The GTX 980 Ti fills the hole in the product line that was created when the Titan X was launched, giving them a high end gaming focused card that while still expensive isn’t the price of a small vacation like the Titan X. So how well does the Ti perform? Well I expected it fall in between the 980 and the Titan X but in nearly every test it is just a small step below the Titan X. The reason this is important is because the performance gap between the cards isn’t in proportion with the price difference, making the Ti a bit of a value. It might sound crazy calling a card that costs nearly $650 a value, but in comparison it is.

Where I was really impressed though was when overclocking the GTX 980 Ti. I saw memory overclocks as high as 8500MHz without any issues, well beyond what I have ever seen on any other card. The GPU overclocks were impressive as well and in the end I saw a performance increase of a little over 16%.

As for downsides, the GTX 980 Ti did run a little warmer than I would prefer but all of the Nvidia reference cards have been running similar. That is because the target temperature is set to 83 degrees by default. I was also sad to see the backplate that had its introduction on the GTX 980 go away also, but I know a lot of the manufactures will include them when they do their custom cards.

So is the GTX 980 Ti the card to get? Well when compared to the Titan X it is for sure. You get nearly the same performance at a much better price. That said it is still a lot of money and frankly it is more card than most need unless running at 1440p or higher. I would also keep an eye out for what AMD has upcoming as well. We don’t know how well it will compare to that until they launch their new cards. 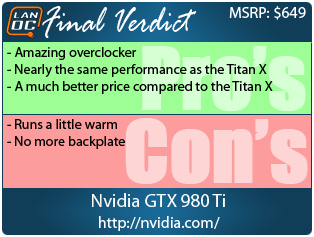 You might call him obsessed or just a hardcore geek. Wes's obsession with gaming hardware and gadgets isn't anything new, he could be found taking things apart even as a child. When not poking around in PC's he can be found playing League of Legends, Awesomenauts, or Civilization 5 or watching a wide variety of TV shows and Movies. A car guy at heart, the same things that draw him into tweaking cars apply when building good looking fast computers. If you are interested in writing for Wes here at LanOC you can reach out to him directly using our contact form.
Discuss this article
Log in to comment
Posts in discussion: Nvidia GTX 980 Ti