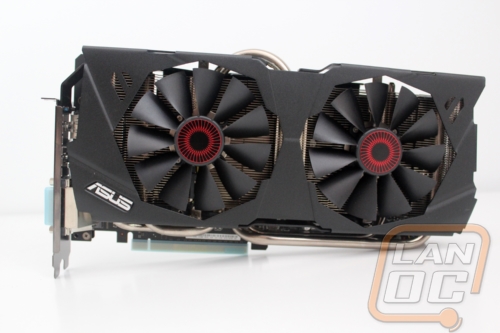 Coming into this review I had fairly high expectations because all of the Strix cards I have tested have performed very well. Add to that the numbers I saw with our original GTX 980 review I expected the GTX 980 Strix to impress and impress it did. As expected the 0dB mode meant silent running a good portion of the time. When the fan did kick on everything ran very cool when gaming putting the GTX 980 Strix down in with much lower performance cards as far as temperatures. The rest of the performance numbers are just as impressive with the Strix out performing nearly everything we have tested in the past with the exception of a few high end SLI configurations. What I liked the most about the card though was the all metal design. Asus used a metal fan shroud along with a backplate. Together they give the Strix a solid feel and protect the card VERY well.

Really the only issue I had with the GTX 980 Strix was with the height of the cooler. While most cases can fit anything, I know there are a few cases like Corsairs Carbide Air 540. Cases like the 540 need a standard height video card and frankly finding a good card that isn’t an inch taller than the PCI slot cover is getting harder and harder.

So if you are on the market for a GTX 980 is the Strix the card to go for? Well for starters currently this is actually one of the cheapest cards you can get so that is a major plus. For me it is the cooling performance and the 0dB design that really sets the Strix apart though. I personally don’t want my computer to sound like a wind tunnel, especially when I’m not in game. 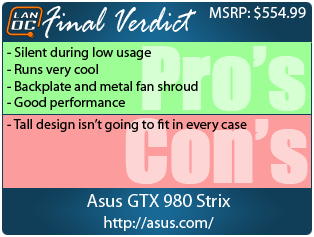 You might call him obsessed or just a hardcore geek. Wes's obsession with gaming hardware and gadgets isn't anything new, he could be found taking things apart even as a child. When not poking around in PC's he can be found playing League of Legends, Awesomenauts, or Civilization 5 or watching a wide variety of TV shows and Movies. A car guy at heart, the same things that draw him into tweaking cars apply when building good looking fast computers. If you are interested in writing for Wes here at LanOC you can reach out to him directly using our contact form.
Discuss this article
Log in to comment
Posts in discussion: Asus GTX 980 Strix