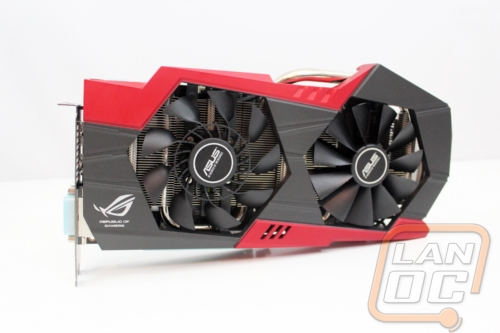 The GTX 760 Striker manages to keep the Asus ROG styling with its red and black design while changing up the look completely from their standard lineup. Actually the styling is a lot like the Poseidon but without the water cooling. What is really interesting about the design is its height. If you look below, there is about a half inch of additional height from the top of the PCI slot to the start of the fan shroud but the highest point is actually even higher than that over on the right. I love the look of the card though. 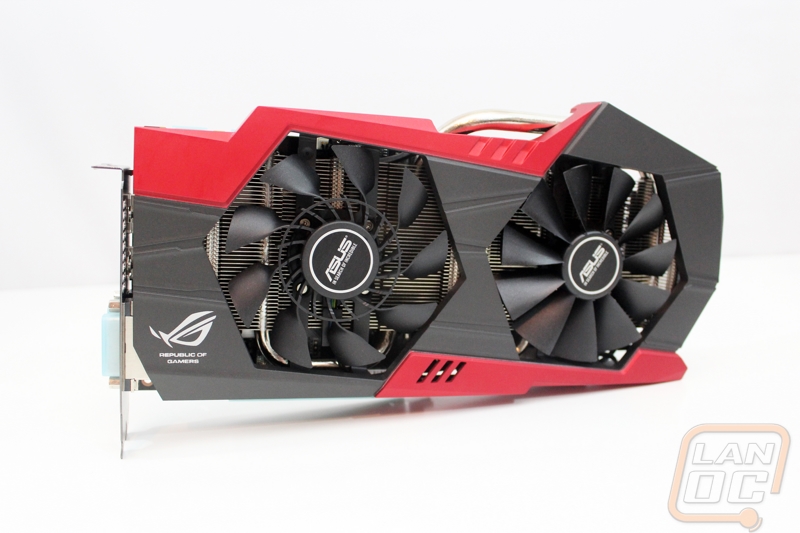 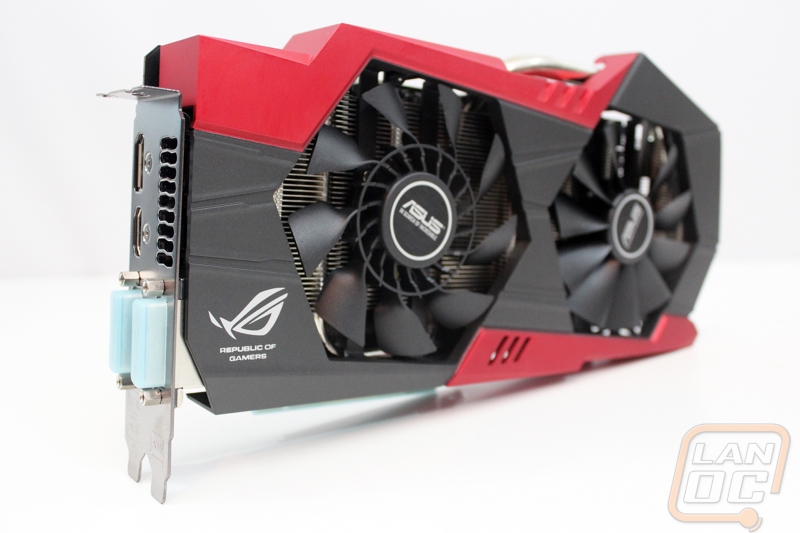 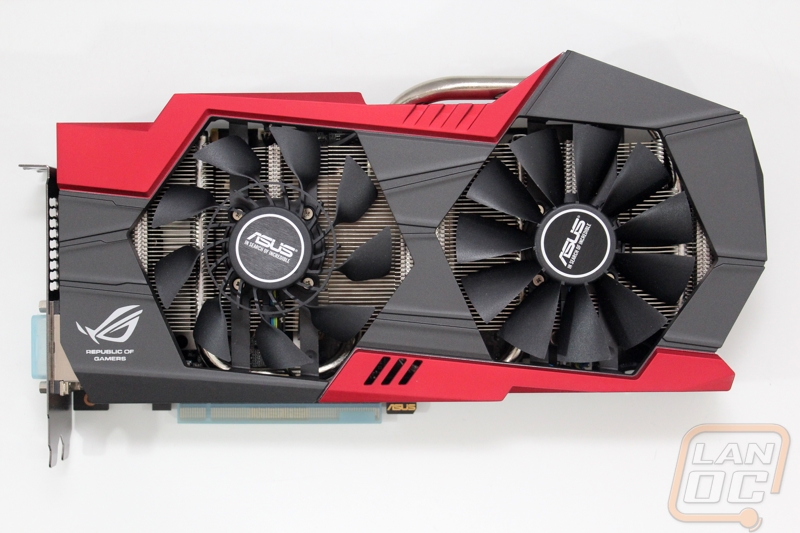 Asus really went all out on the cooling considering this is a GTX 760, they aren’t typically known for running SUPER hot. Anyhow as you can see in the breakdown below they slipped in a MOSFET heatsink up under the heatsink that runs the length of the card for the GPU. Speaking of that thing, they only used one heatpipe but at 10mm thick they don’t need multiple heatpipes to pull the heat away from the GPU. What I found the most interesting about the design was the two different fan designs used. The fan on the left is what Asus calls their CoolTech fan design, it was used on their DirectCU Mini because of its small form factor. The small fins on the inside actually blow air out while the normal blades push the air down. This helps push some air out the back of your PC as well, something most aftermarket designs don’t bother to do. 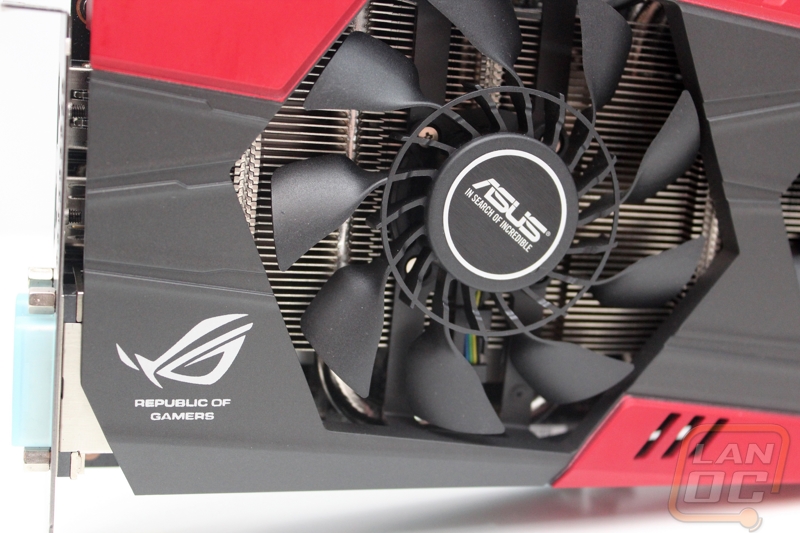 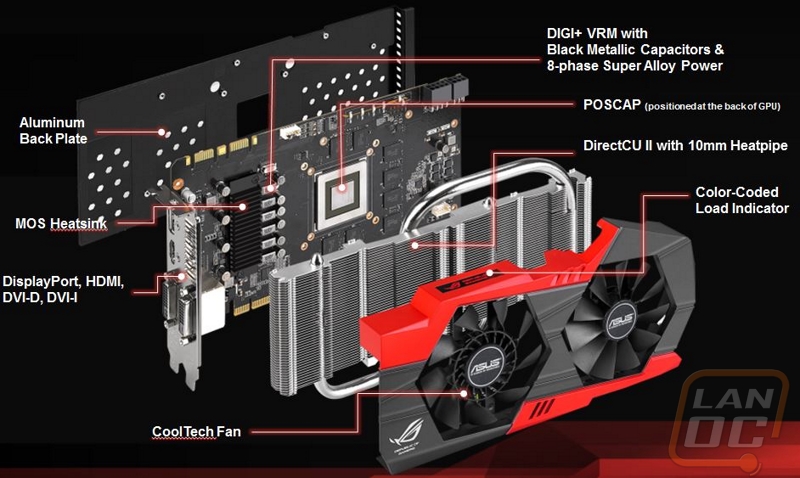 The Striker is more than a nice cooler on a reference card like most other video cards. Asus went with all Nichicon GT-Series Black Metallic capacitors, hardened MOSFETs, and concrete core chokes. That means the Strikers capacitors have 5 times the life expectancy of a standard capacitor. They also handle temperatures both on the low and high side helping with overclocking on the low side. You shouldn’t have to worry about the Striker getting up to 125 degrees Celsius, but if it does these capacitors can handle it where normal caps peak out at 105. They also include their DIGI+ voltage regulator module with 8 phase power 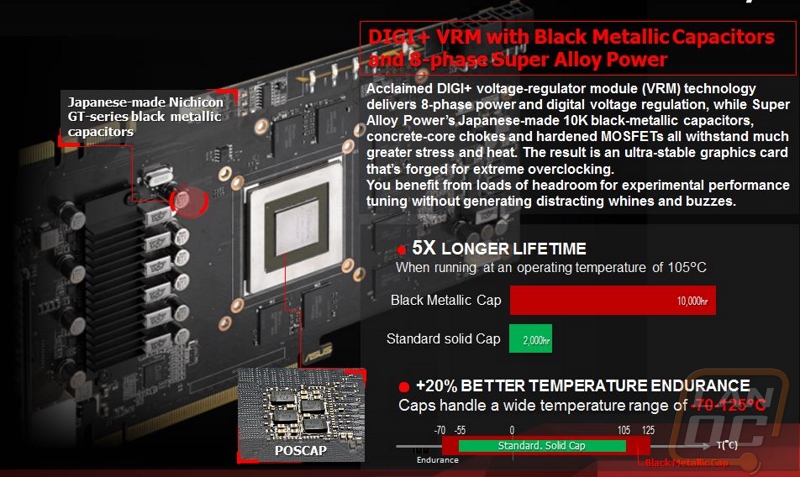 Here at the front of the card we can see the GTX 760 Strikers two SLI bridge connections. You can see just how much taller the PCB and fan shroud are over the top edge of the PCI slot, keep that extra height in mind if you are planning on packing the Striker in a case with limited clearance. 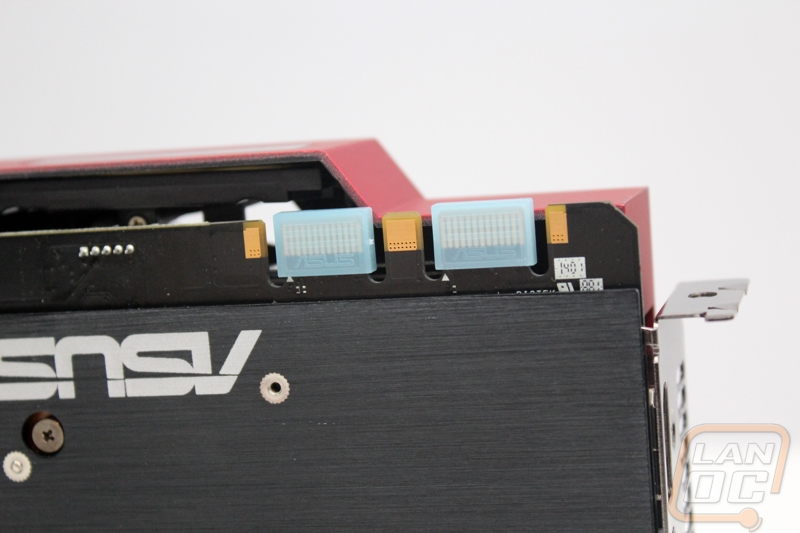 One of the key features of the Striker is the backlit Republic of Gamers logo on the top edge of the card. This is the most visible area of the card when it is installed in your case. The key to the backlighting though is that it changes colors as you put the card under load. Light load glows blue, medium load is orange/gold, and then heavy load is red. This photo also does a great job of showing how the fan shroud covers some of the heatpipe but also goes under it at its peak. 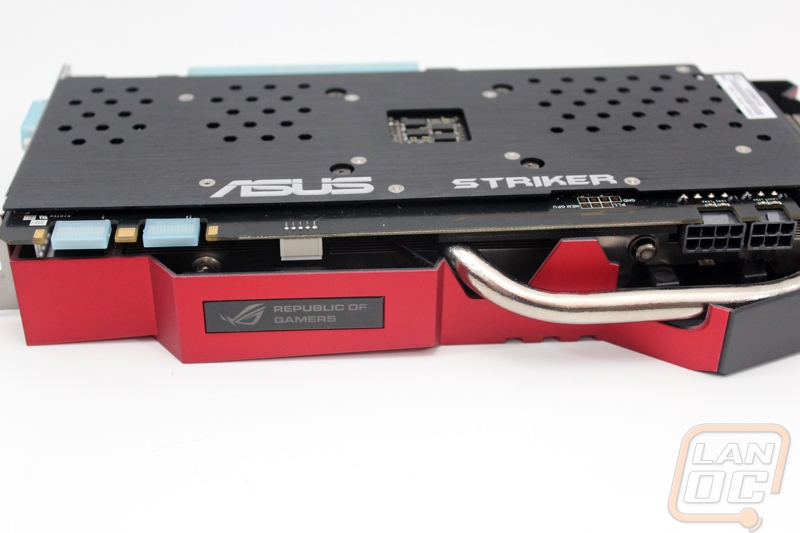 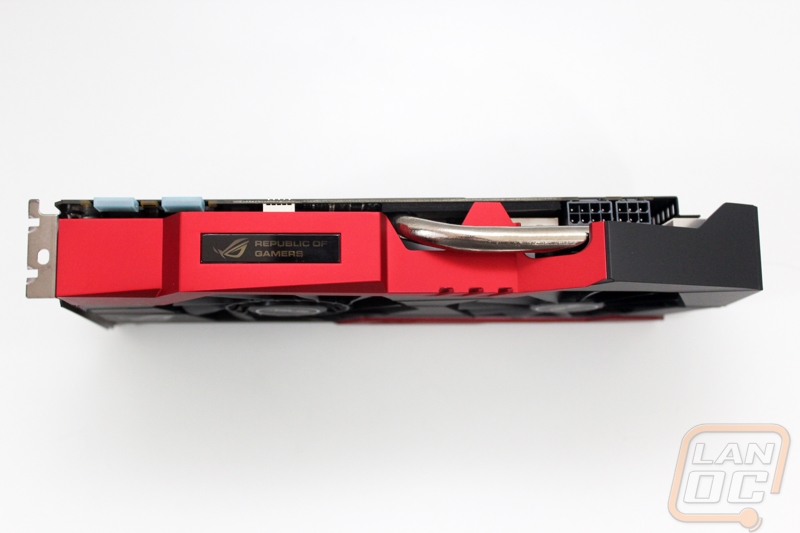 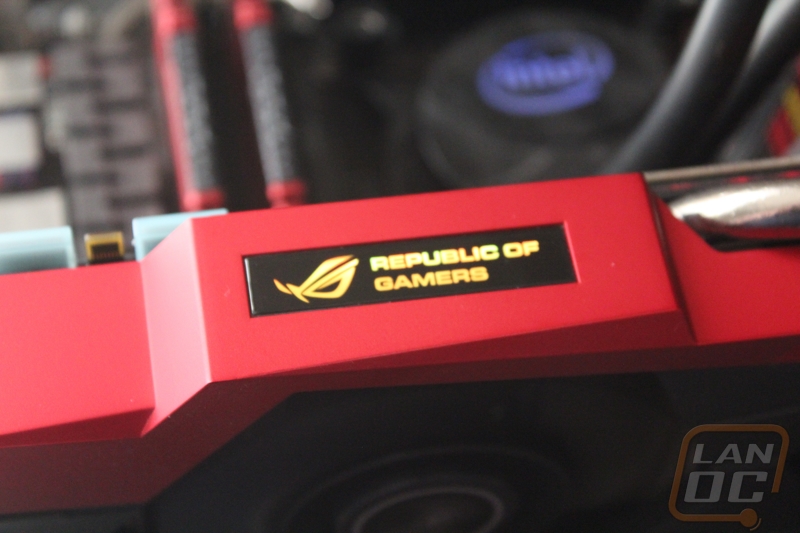 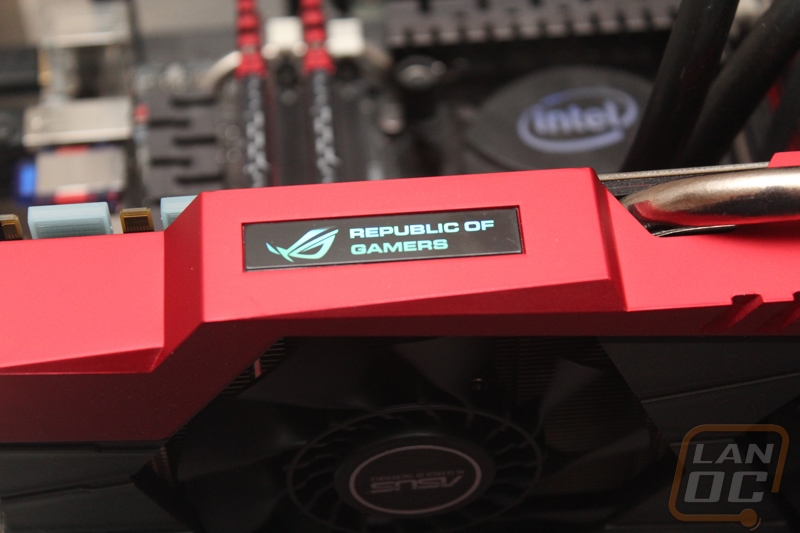 Also along the top are the two power connections. The Striker requires an 8-pin and a 6-pin power connection to get things rolling. With that large heatpipe running right over them there isn’t much space for getting your fingers in there so Asus actually flipped the plugged around backwards and notched out the PCB for the clips. 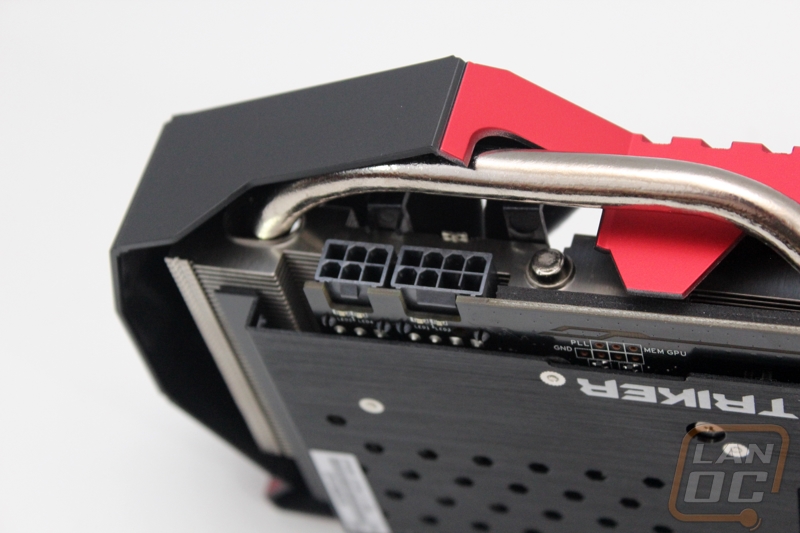 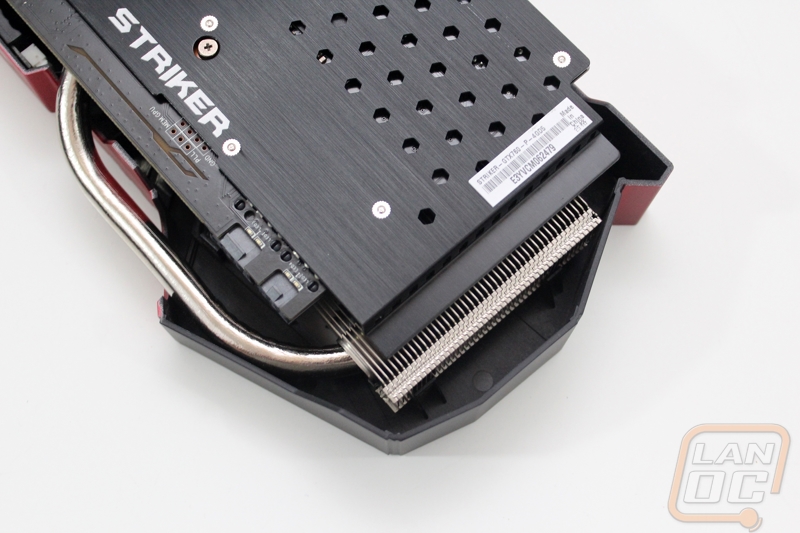 I absolutely love that Asus included a backplate on the Striker. Not only do that add to the appearance but they also help protect the card and adds rigidly. Asus included their branding as well as the Striker name on the backplate as well with both facing the wrong way if you sit the card up like in the first picture below but once installed you can read the branding through your side panel window. 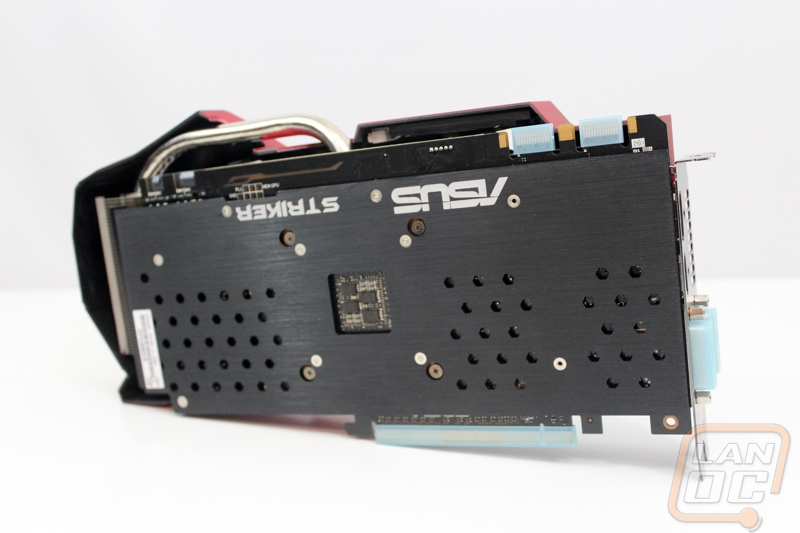 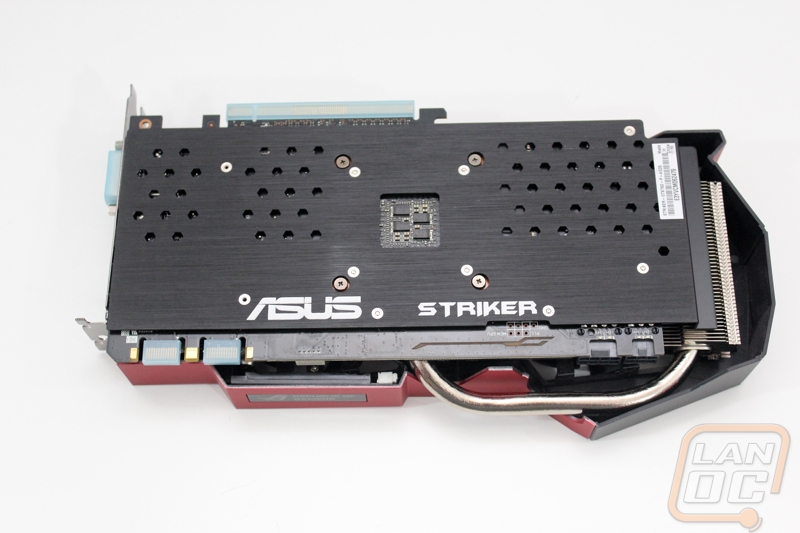 It’s a small touch, but I love the small Asus logo down on the PCIe slot. They are able to do this because not only do they make their cooler, but they also manufacture the PCB. Many manufactures buy their cards and tack on their cooler design. 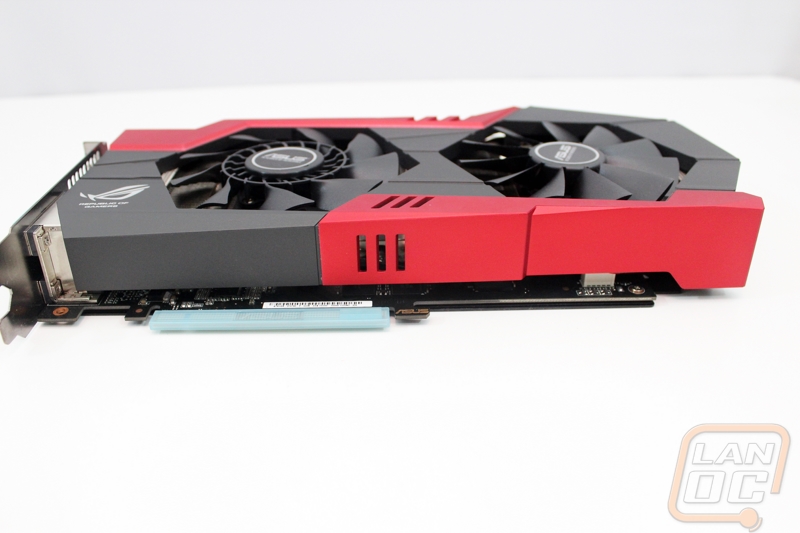 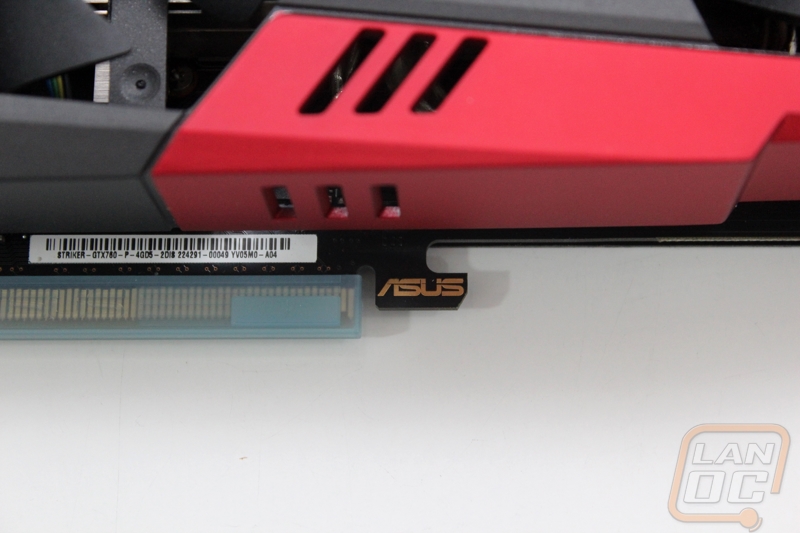 On the end of the card the GTX 760 Striker has standard video connections. You get two DVI, one full sized HDMI, and one full sized DisplayPort. There is also a small rear vent for a little extra ventilation. Paired up with the unique fan design I would expect this to add a little to the cooling where normal coolers wouldn’t benefit from the vent. 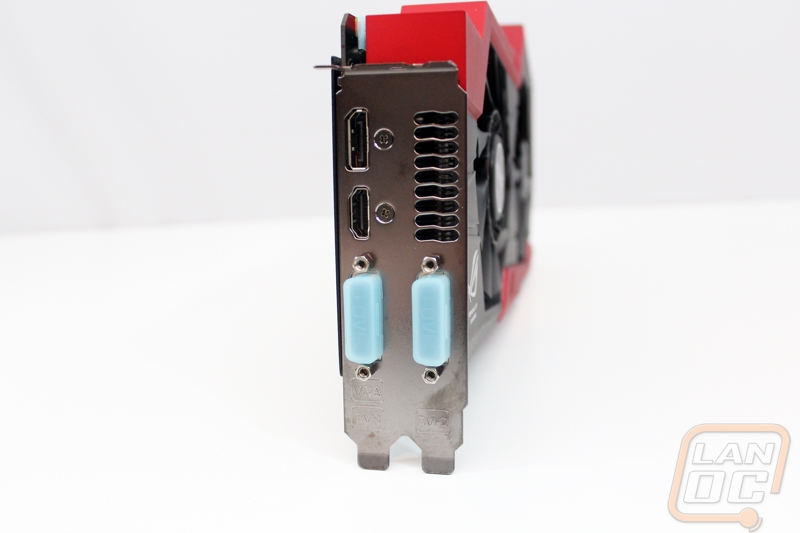