Sure its not a Titan or a GTX 780 Ti, or an R9 290X, but the GTX 750 Ti put up some impressive numbers in our testing. It’s not going to be your first choice on your next high end build of course, but for a budget card it performed very well in game as well as in the synthetic benchmarks. When it came to noise, power, and cooling testing the Maxwell architecture really pulled its weight by dominating the charts. Without a doubt the 750 Ti is the fastest card we have ever tested that didn’t require a power connection. That means all of you with Dell PCs can rejoice. You can finally drop in a card that is going to play most of the games on the market without having to upgrade your power supply.

The power requirements of the GTX 750 Ti benefited the card in other areas as well. For one it ran very cool and quiet. When it came to overclocking I was extremely impressed with its performance as well. The biggest limitation I had with overclocking the GPU on the 750 Ti was the clock speed offset limit in the software itself. Really my only complaint about the card was how underwhelming the heatsink is. Talk about a first world problem, Nvidia creates a card that runs so cool that the heatsink needed to keep things cool is small and underwhelming. It’s really hard to fault them for that really, considering its performance I really don’t think the 750 Ti is far off from being able to be passively cooled.

With this being a new GPU launch, we also need to take a look at its price point in relation to the completion. At $149 for the 2GB model testing here I think Nvidia hit the nail on the head. The R7 260X ranges in price from $139 to $159 right now and the 750 Ti out performed an overclocked 260X in nearly every test. Sadly I can’t say how well it will perform against the R7 265 that was introduced just this past week. That will be the biggest question because the R7 265 should be hitting the shelves at a similar price point. But considering the R7 265 has a whopping 150W TDP, I don’t think they are going to come anywhere near the performance/watt of Maxwell for a while. 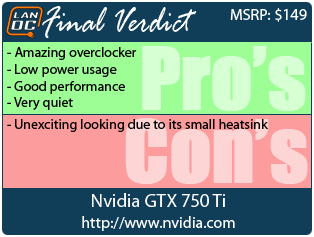 You might call him obsessed or just a hardcore geek. Wes's obsession with gaming hardware and gadgets isn't anything new, he could be found taking things apart even as a child. When not poking around in PC's he can be found playing League of Legends, Awesomenauts, or Civilization 5 or watching a wide variety of TV shows and Movies. A car guy at heart, the same things that draw him into tweaking cars apply when building good looking fast computers. If you are interested in writing for Wes here at LanOC you can reach out to him directly using our contact form.
Discuss this article
Log in to comment
Posts in discussion: Nvidia GTX 750 Ti (Maxwell Launch)

We have 1015 guests and one member online