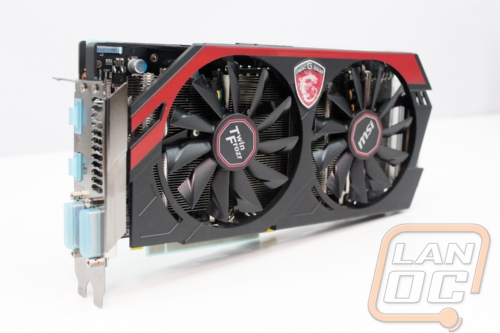 I put the MSI R9 270X Gaming 4G through the same overclock testing that I put all cards through. I break down the testing into three parts, GPU clock speed overclocking, Memory overclocking, and overclocking both together. To test to make sure the overclock is stable I run through test two on 3DMark at the performance setting.

Starting with the GPU clock, I bumped things up to 1150MHZ from the 1120 that the MSI card runs at (without using their included software). I had good luck with that so I moved on to 1200MHz with good luck. After that my next three attempts failed meaning the 1200MHz I had originally reached was the best our card was able to do. From there I went on to the memory overclocking starting at 6000MHz with it passing. All of my memory overclocking was successful  all the way up to the highest option available in the AMD software (6500MHz). Overall though memory overclocking didn’t yield big speed gains like the GPU clock speed overclocks, in fact a few of the tests went down in performance. My last batch of testing was just to verify that my previous results could run together. My first test failed, rather than turning one of the overclocks down I raised the power threshold and ran it again. The second pass with the increased power passed and both overclocks together gave us a nice FPS improvement over all of the other overclock results.

We have 1312 guests and no members online