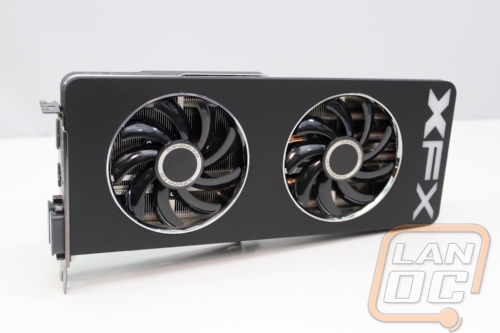 When it came time to do the overclock testing on the XFX R9 290 DD Edition I had no intention on going through the guessing game that is overclocking with the AMD software. I did that with the Sapphire card even though they provide their own software. Sadly XFX doesn’t provide similar software, but this time I went ahead and used software from another manufacture that was available to everyone. This software allowed me to set clock speeds directly and to be able to set the fan speed to a specific percentage where the AMD software only lets you set a temperature limit. With everything ready to go, I started with GPU clock speed overclocking. The XFX R9 290 DD Edition is pre overclocked, but I bumped things up to 1000MHz to get things started. With good luck at 1000MHz and 1100MHz I continued to 1200MHz but reached my limit. From there I slowly brought things back until I I could get through our benchmark without a crash. The end result was 1110MHz, just slightly less than what I saw with the Sapphire card.

When it came to memory overclocking I went through the same process starting at 5300MHz. The XFX R9 290 DD Edition memory overclocking continued with good results all the way up to 6400MHz before issues. The highest successful overclock was 6300MHz. At 6400MHz I ran into the same issue that I had with the Sapphire card, the card completely shut down. There is obviously something right at 6400MHz/ 30% in the AMD software that causes this issue. Frankly though, I wouldn’t push the card that far day to day anyhow on the memory side, memory overclocks don’t give very much performance as the numbers below will show.

We have 1296 guests and one member online