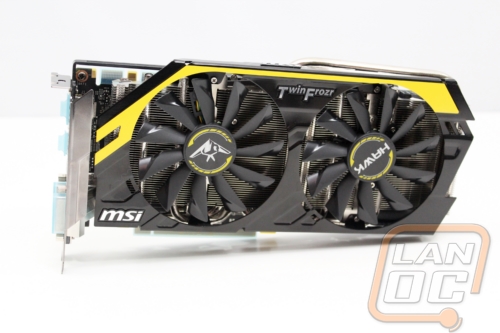 For the first time in a very long time, when I was putting together my Pro’s and Con’s for the MSI GTX 760 Hawk I actually ran out of room in the Pro’s section. If you have read any of the previous sections you will find that the Hawk out performs all of the other GTX 760 options in cooling, synthetic benchmarks, in game benchmarks, and even overclocking.

There are only two areas where the Hawk didn’t top the charts for its class; first its power draw was considerably higher than any other GTX 760 that I have tested. The second area we have yet to talk about is price. I’m told that the Hawk will come in at 289.99 or 299.99. Even the lesser amount is about $40 more than the other GTX 760’s. But you are getting a lot more card for the additional money. Along with the additional performance, you are getting a backplate, two more PWM’s, and one of the best coolers on the market.

Considering the price gap between the GTX 760 and the GTX 770, I think MSI has a great card here. Additionally, for those looking at this card for overclocking, I can say without a doubt that even though my numbers are great. There is still more performance to be had once you get into toying with the voltages as well. 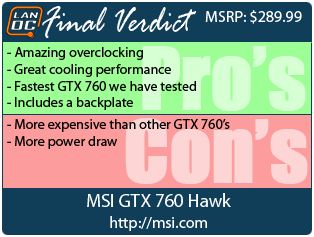 You might call him obsessed or just a hardcore geek. Wes's obsession with gaming hardware and gadgets isn't anything new, he could be found taking things apart even as a child. When not poking around in PC's he can be found playing League of Legends, Awesomenauts, or Civilization 5 or watching a wide variety of TV shows and Movies. A car guy at heart, the same things that draw him into tweaking cars apply when building good looking fast computers. If you are interested in writing for Wes here at LanOC you can reach out to him directly using our contact form.
Discuss this article
Log in to comment
Posts in discussion: MSI GTX 760 Hawk