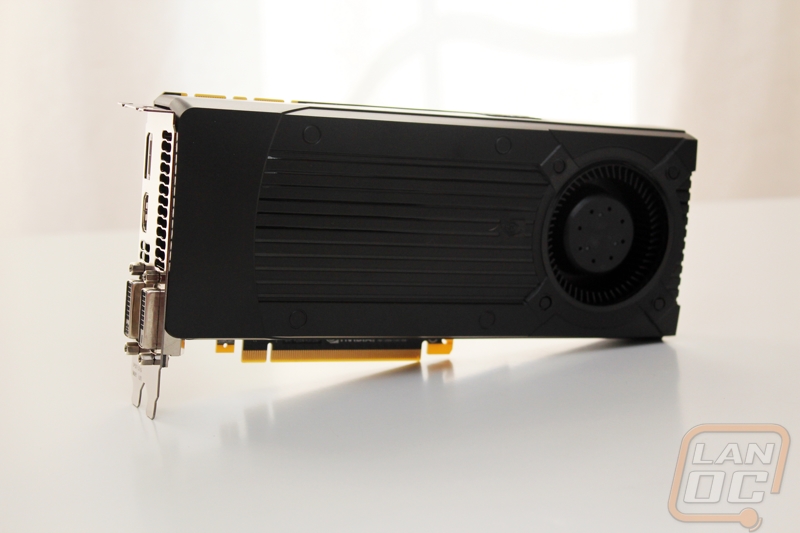 Now that I have taken a look at the GTX 760 both aesthetically as well as its performance, what do I think? Well I was very happy with the cards performance, give or take depending on the test I saw results similar to the GTX 670, in other words this year you are getting the performance of two cards up. This puts it in line with the GTX 770 and GTX 780 as well as the rest of the lineup that will consist of the GTX 660 and below for at least a good portion of this year.

Nvidia priced the GTX 760 at $249 here at launch and at that price you are getting performance that would have cost you a lot more earlier this year. In fact I think for a lot of people that $249 MSRP is going to be the sweet spot much like a lot of the other cards that came in at that same price point like the GTX 560, GTX 460, GTS 8800 G90, etc. You should be able to play everything that is out now and when you want or need more performance later on picking up a second card isn’t going to make your wallet get up and run away.

In my testing I was extremely impressed with the overclocking performance that I saw with the card, especially on the memory side. Ironically In my Pro’s and con’s below you will see that I was happy with the noise levels of the card in everyday use due to the new fan controller but in my testing I also noted that the fan made more noise when accelerating up to its target speed. Both can be possible because the new fan controller’s design is to prevent all of the up and down in fan speeds. My only other complaint (and it is trivial) is the reference designs fan shroud is the exact same design from last year. It actually goes well with the new 700 series cards, but I always like seeing new designs as well. I’m sure all of the overclocked designs will be using various other designs anyhow so most won’t even see a reference design. 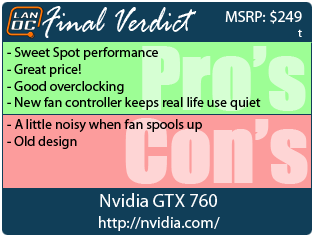 You might call him obsessed or just a hardcore geek. Wes's obsession with gaming hardware and gadgets isn't anything new, he could be found taking things apart even as a child. When not poking around in PC's he can be found playing League of Legends, Awesomenauts, or Civilization 5 or watching a wide variety of TV shows and Movies. A car guy at heart, the same things that draw him into tweaking cars apply when building good looking fast computers. If you are interested in writing for Wes here at LanOC you can reach out to him directly using our contact form.
Discuss this article
Log in to comment
Posts in discussion: Nvidia GTX 760