Let’s talk about the elephant in the room right out of the gate. I spoke extremely highly of the reference design on both the GTX 780 and GTX 770 reviews. Both because of their quality as well as their styling. I’m sure EVGA would have kept the reference design if they could, but let’s be honest you couldn’t really call this the ACX model while running the stock cooler. Not to mention there isn’t any way to add a second fan to the design without completely losing the window and a good portion of the styling as well. 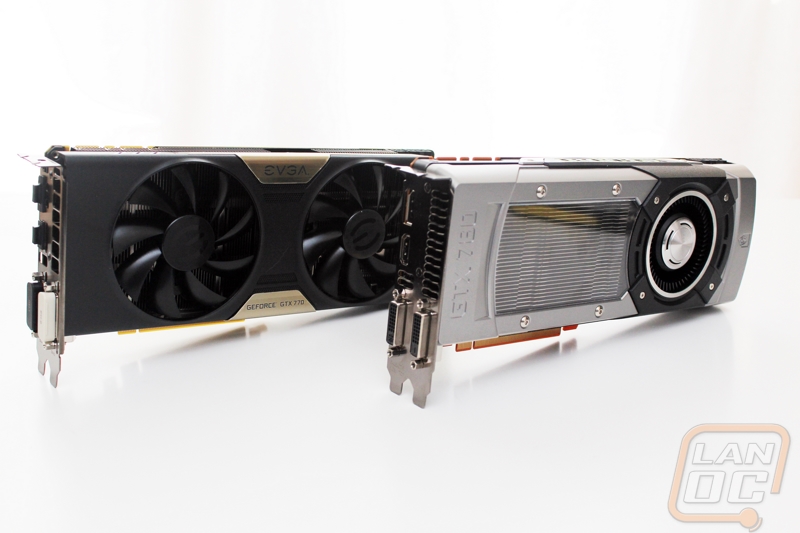 The ACX cooling’s main feature would be the two large cooling fans that blow over a large heatsink that spans the entire length of the card. To help cool things EVGA uses heatpipes to pull the heat from the GPU out and across the card. There is a fan shroud across the side of the card that helps focus the air from the two fans onto the cards heatsink. I will also admit that this is a very stylish card. The champagne colored accents give it a nice styling without going overboard. It is far from looking like the reference design, but it is a nice contrast for people who may not want something as flashy or for people who just need more cooling. 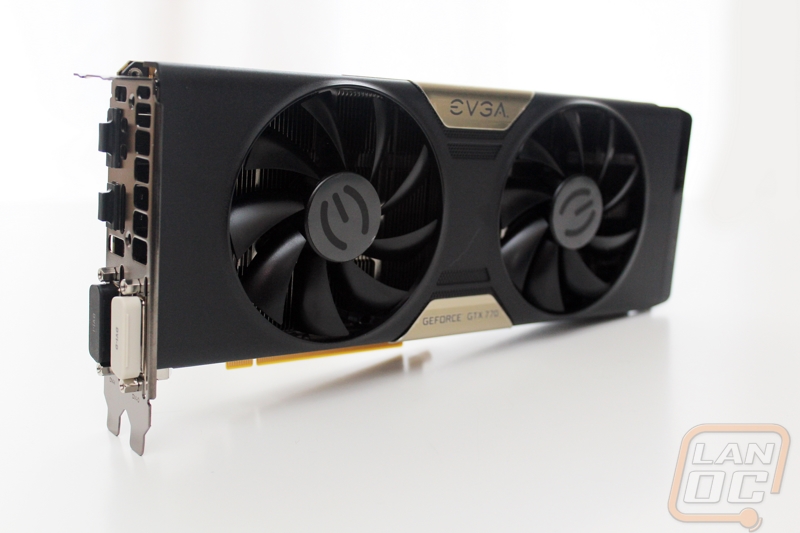 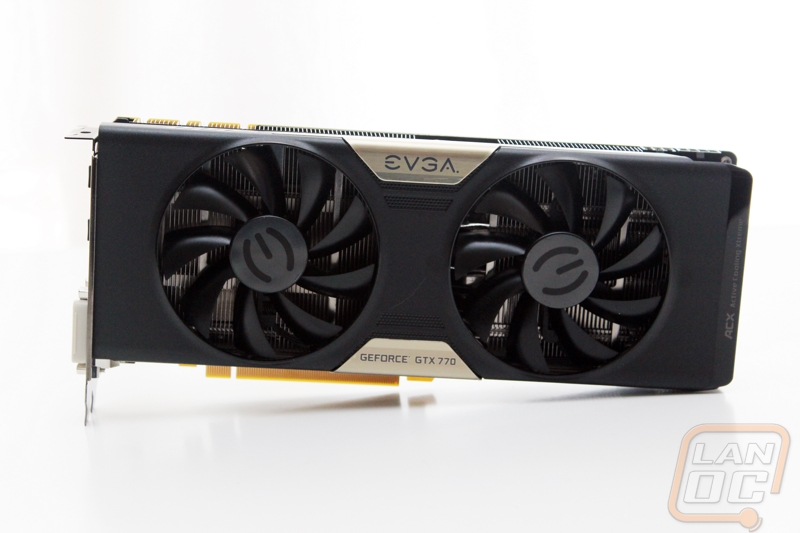 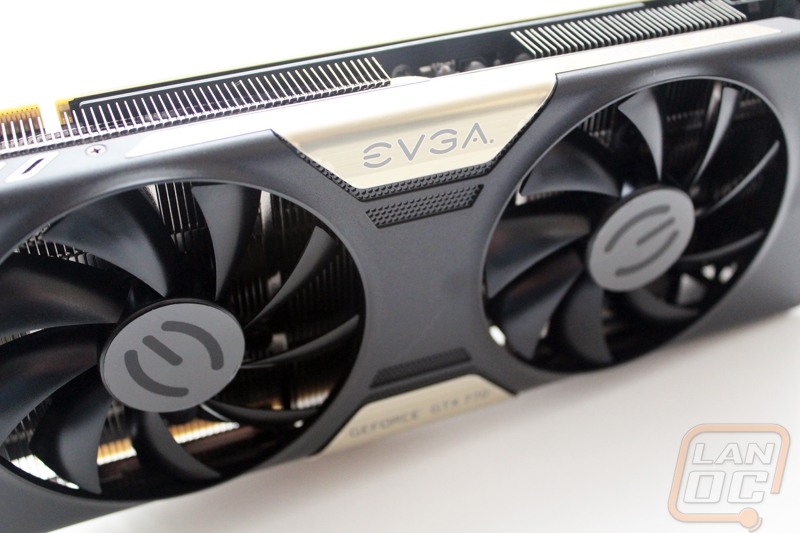 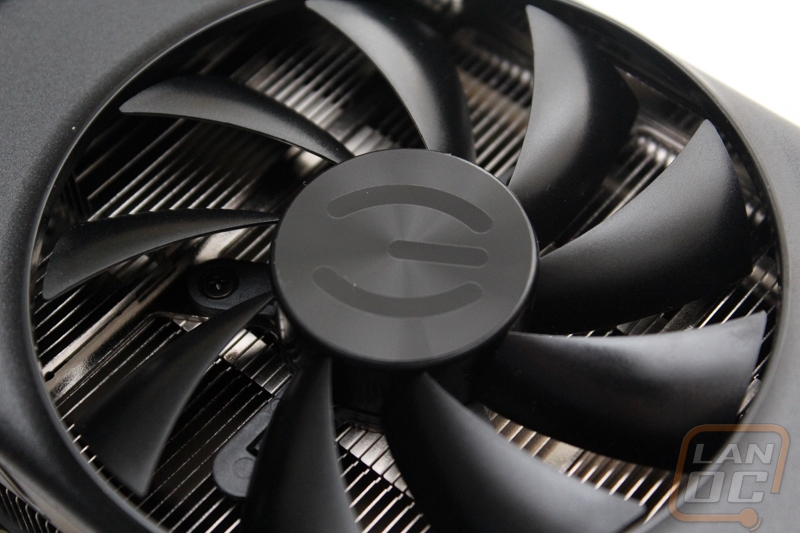 Here are a few better pictures of the heatpipes on the ACX cooling as well as a few good examples of how this card will blow most of its heat into your case. For most builds this isn’t a big deal, but if your case has limited cooling now you will want to keep it in mind when picking up this card. The reference card will blow most of its heat out the back of the case. 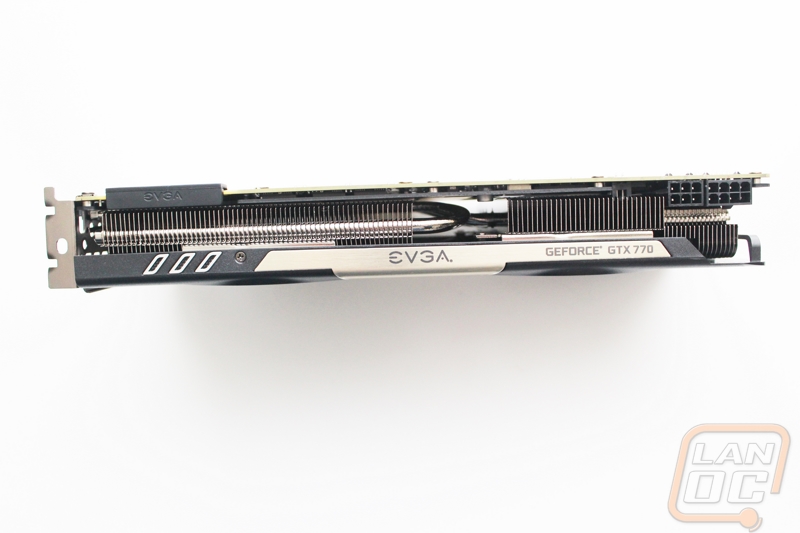 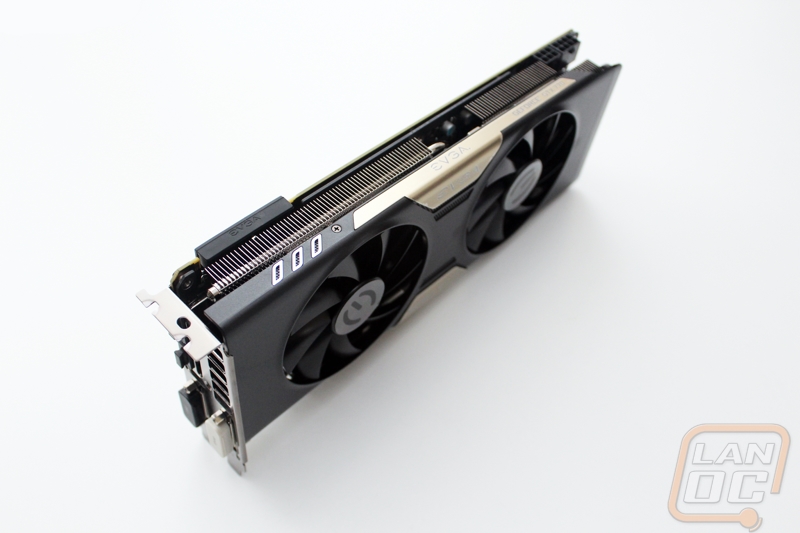 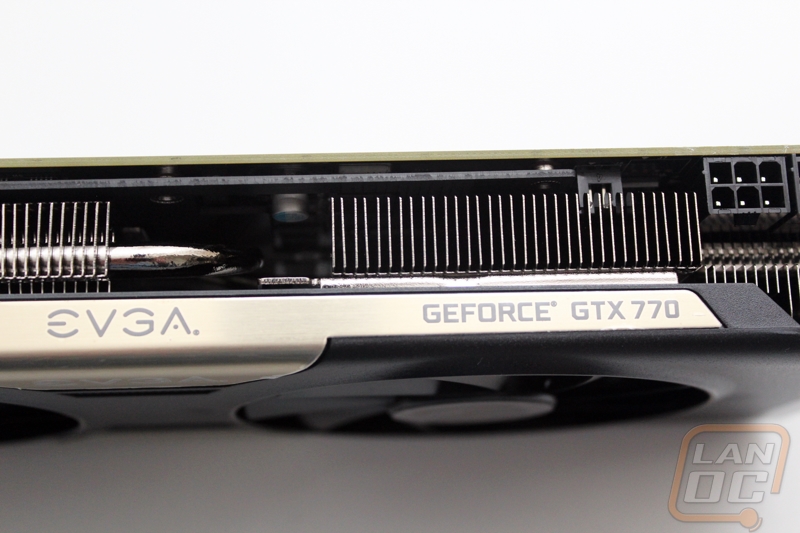 It’s not really a surprise that the end of the GTX 770 ACX is open, considering the openings on the top and bottom of the card. It really isn’t designed to blow air out this end of the card like the reference card but this is a perfect view of its heatpipes and what almost looks like polished or chromed heatsink fins. You can also see the mounting bracket here for the ACX cooling, it looks like it will do a good job giving the cards PCB additional support as well. 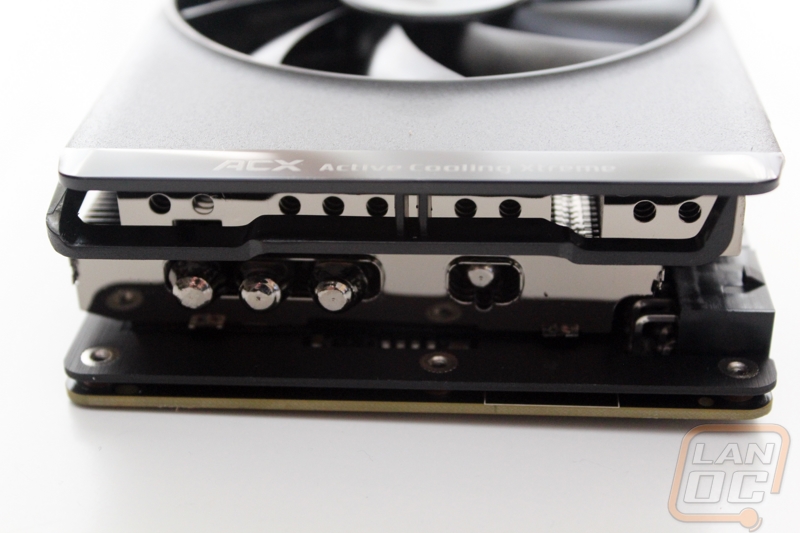 The GTX 770 ACX does have two SLI bridge connections and is capable of running 3-way SLI for those who are considering future expandability or a crazy build now. 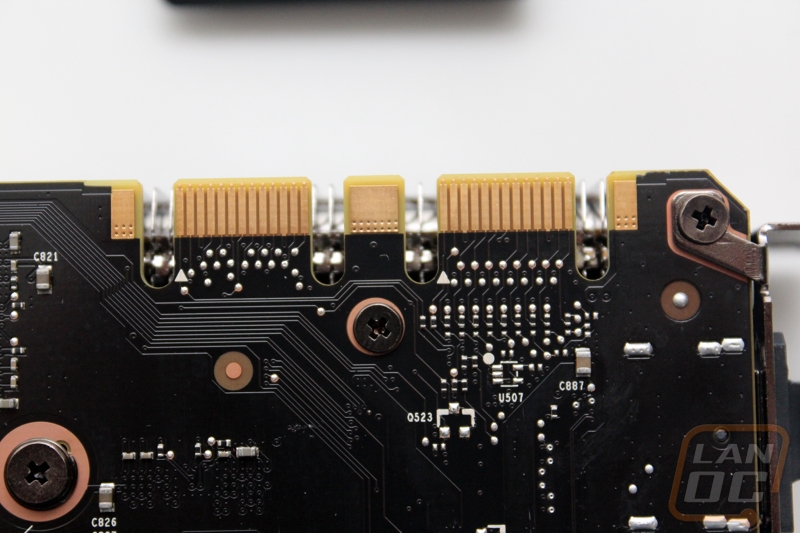 The two power connections are tucked in up under the ACX cooling. You will need an 8 pin and a 6 pin power plug to give the GTX 770 ACX the power it needs. 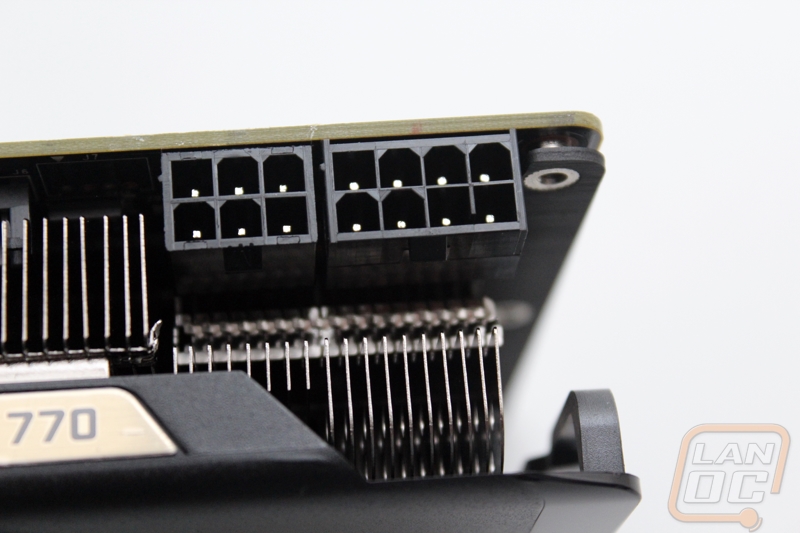 When we take a look down at the connections on the end of the card we have the same four hookups that we saw on the reference design. Those would of course be a DVI-D, DVI-I, HDMI, and DisplayPort plug. What is different though is the design of the PCI slot cover itself. EVGA has included one of their high flow slot covers on the ACX card, they manage this by opening up a lot of the slots and they have included small vents in every possible spot they could including right above each DVI port and even two small holes above the DisplayPort plug. 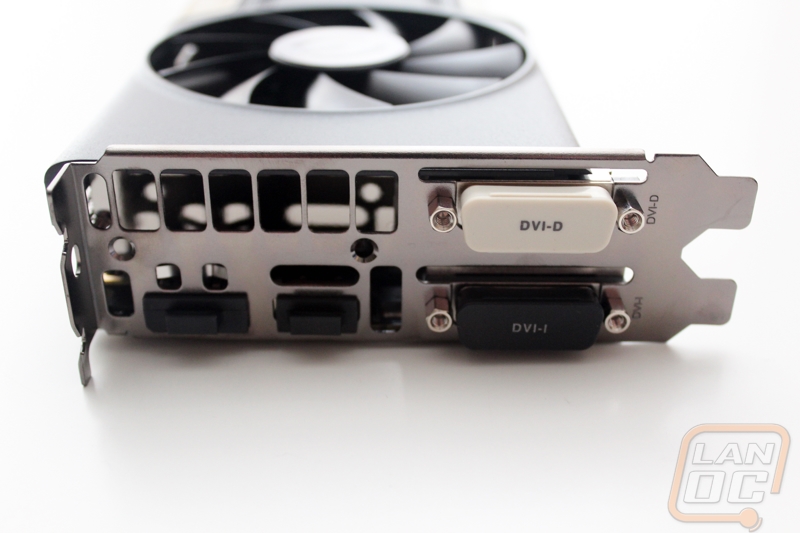 Flipping the GTX 770 ACX over we can see that the overall PCB design looks to be the same as the reference design other than the fact that EVGA went with a nice dark black PCB finish that complements the cards styling. 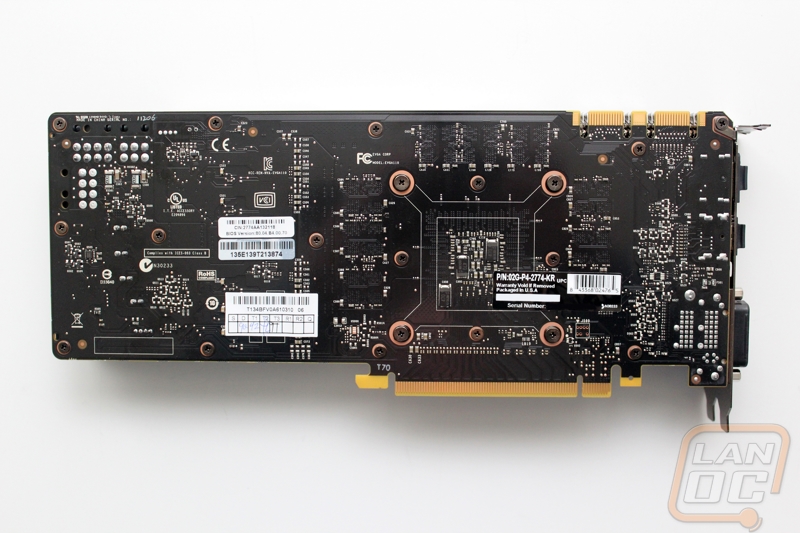 garfi3ld replied the topic: #31187 30 May 2013 20:09
The second review for today is a second GTX 770, this time around with EVGA's new ACX cooling. Check out the review to find out how the additional cooling performed.