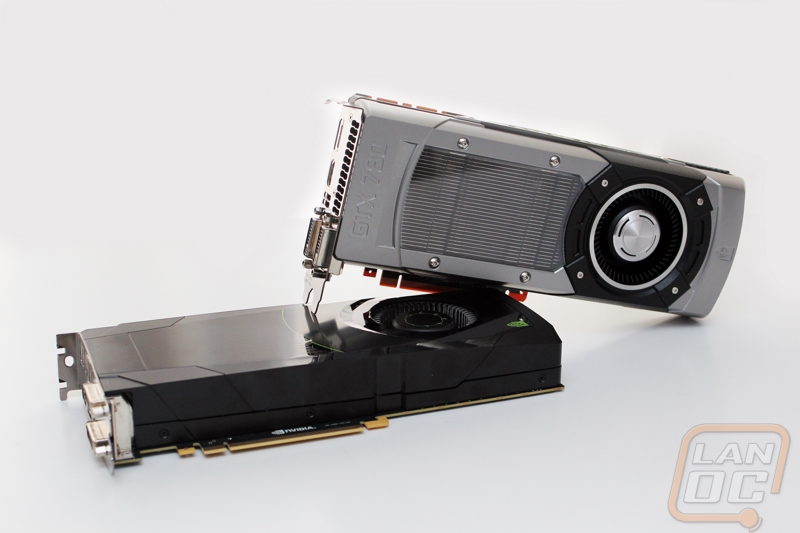 This time around Nvidia made the first move against AMD and I can see why. The GTX 780 is an amazing card both in performance as well as every other metric we can put together. Let’s be honest, this has to be one of the best looking video cards we have ever seen and it’s a reference card! Nvidia has created a styling starting with the GTX 690 then on to the Titan that we also see in the GTX 780. I’m excited to see what the rest of the 700 series cards end up looking like. Performance is always important but a lot of enthusiasts would be lying if they said that the way a video card looks didn’t have some effect on their buying decision. On that alone people are going to love the GTX 780, but it’s no slouch when it comes to performance as well. In fact in a lot of cases we saw improvements of up to 43% in game compared to the R7970 that we tested as well as last year’s GTX 680. GTX 580 and older owners will start feeling the pressure to upgrade with the GTX 780 out as well as it does really push the limits. With 2304 CUDA cores we will most likely see the GTX 780 being used a lot for people who are just looking for compute performance as well.

Along with the card, Nvidia has been hard at work on their software improvements. On the card itself they improved noise performance by rethinking how fan controllers should adjust fan speed. Even more impressive is what they are working on with their drivers. As of today Nvidia drivers will now include the GeForce Experience with their drivers to help everyone keep their drivers up to date without disruption as well as the ability to help you tune the settings on all of your games to perfectly match your setup. All of that was shadowed slightly by the upcoming shadowplay feature though that will allow you to record your gaming without slowdowns and keep a DVR like buffer of video in case something really impressive happens while you are gaming.

So what does it all cost you? Well the GTX 680 launched at an extremely low $499.99 and is priced at around $430 at its lowest right now. The HD 7970 launched at $549.99 and is at $449 right now. The GTX 780 comes in at $649. It’s not cheap without a doubt, but what I took into account is the performance increases over the GTX 680 and HD 7970 and their current prices. With those in mind it’s priced about right, especially considering the amazing styling and heavy duty construction. It will be out of price range of a lot of people, but this is about where top end video cards were sitting before the economy dropped, I am curious to see how well the new price will go over. 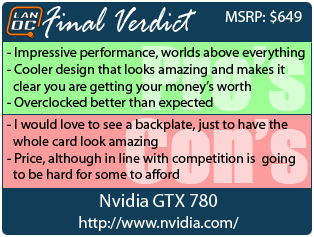 You might call him obsessed or just a hardcore geek. Wes's obsession with gaming hardware and gadgets isn't anything new, he could be found taking things apart even as a child. When not poking around in PC's he can be found playing League of Legends, Awesomenauts, or Civilization 5 or watching a wide variety of TV shows and Movies. A car guy at heart, the same things that draw him into tweaking cars apply when building good looking fast computers. If you are interested in writing for Wes here at LanOC you can reach out to him directly using our contact form.
Discuss this article
Log in to comment
Posts in discussion: Nvidia GTX 780

We have 1065 guests and one member online