When it comes to performance the Gigabyte HD 7790 1 GB OC falls exactly where you would expect it, just in between the reference GTX 650 Ti Boost and the MSI overclocked card. The XFX R7790 that we tested does inch out a little more performance over this card, only because of its slight memory overclock. What sets the cards apart really are their different cooling configurations, the XFX with its dual fan design and the Gigabyte card with its single fan design. In the end the XFX card did slightly edge out better cooling and a little less noise at full load but the Gigabyte card is still a fine option, especially if you prefer to stick with the same manufacture who made your motherboard as well. Additionally the XFX card is a more expensive card, the Gigabyte card comes in at the lowest price for an HD7790 right now $149.99. For that price you are still getting an overclocked card as well.

When we compare this to the GTX 650 Ti Boost’s that we took a look at recently. There are a few up’s and downs with it all. As far as performance goes, you are getting similar performance with this card in most cases to what the Boost can do. The smaller 1GB frame buffer does hold the card back but also helps justify the $20 lower price. Additionally AMD is bundling games with the HD 7790’s currently making it an even better value. Right now you will also get a copy of Far Cry 3 Blood Dragon as well as Bioshock Infinite, which are a $14.99 game and a $59.99 game. Not bad a bad bundle for a $149 video card. When you put it that way, the HD 7790 is a steal. 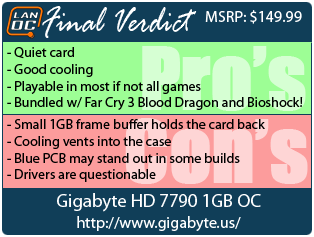 You might call him obsessed or just a hardcore geek. Wes's obsession with gaming hardware and gadgets isn't anything new, he could be found taking things apart even as a child. When not poking around in PC's he can be found playing League of Legends, Awesomenauts, or Civilization 5 or watching a wide variety of TV shows and Movies. A car guy at heart, the same things that draw him into tweaking cars apply when building good looking fast computers. If you are interested in writing for Wes here at LanOC you can reach out to him directly using our contact form.
Discuss this article
Log in to comment
Posts in discussion: Gigabyte HD 7790 1GB OC