Along with new game benchmarks we also changed how we handle cooling and noise testing and added power usage testing as well. For cooling testing we switched to the Heaven 4.0 benchmark and we let it run for a half hour under the same “extreme” preset that we do on the Heaven 4.0 benchmark. This will warm the card up in a similar way to what you should expect to see in the average game. Our last review only put the MSI GTX 650 Ti Boost Twin Frozr up against the reference card. This time around we have gone back and retested a few other cards to start filling in the blanks, expect to see us do this more with a few other cards in the future, namely the HD 7970 and GTX 680. So how did the compact BizView perform against the much larger cards? At load we saw 67 degrees, more than the MSI Twin Frozr design as well as more than the GTX 560 Ti reference card but still less than the others. I was hoping to see this card run a little cooler, but considering how compact the design is I’m not all that surprised. Even more concerning though is that the card vents all of that heat into your case, hopefully your compact case will have enough cooling to handle it.

For noise testing we changed things up as well to a less subjective test using a decibel meter. We hold the meter three inches away from the fan side of the card on an open test bench. Your experience in a closed case should be lower. We do the test at an idle state as well as with the fan turned up to 100%. This is basically a minimum and maximum situation, your in-game noise levels will fall in between depending on how much load the game puts on the card itself. Idle loads are done the same way but out of game in windows at idle. With the smallest cooling fan of the bunch I was a little concerned that the BizView would be especially noisy but when I fired everything up and did our idle testing I was surprised. At 62.2 this is the second quietest card at idle. At 100% it is much more impressive being the quietest card tested and only two decibels higher than at idle even!

Our new power consumption testing uses the same Heaven 4.0 benchmark to put a load on the card while watching for peak power draw using a Kill-a-watt hooked to our test bench. The total power usage is going to include the power needed to run our motherboard, 3960X CPU, hard drive, SSD, and water cooling on top of the video card itself. Diamond suggested that the maximum power that the BizView is capable of pulling is 75 watts. Our test bench pulled 193 at idle and 252 total in game. Just about any PC should have the power available for that. 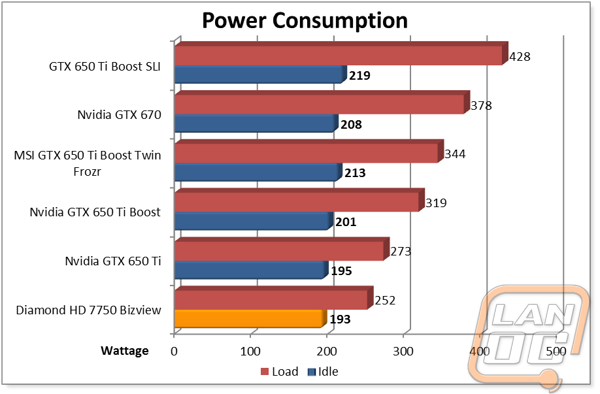