Yesterday I took a look at the MSI GTX 650 Ti Boost Twin Frozr 2Gb OC Edition, although I teased about its extremely long name I was impressed with the card overall. Being the second GTX 650 Ti Boost that we took a look at, I of course couldn’t resist pairing it up with the reference card as well for a little SLI testing. As with our other SLI and crossfire posts we don’t mess around talking about the cards at all. You can check out the individual reviews for that. We jump right into the performance results and give you what you want to see. Enjoy! 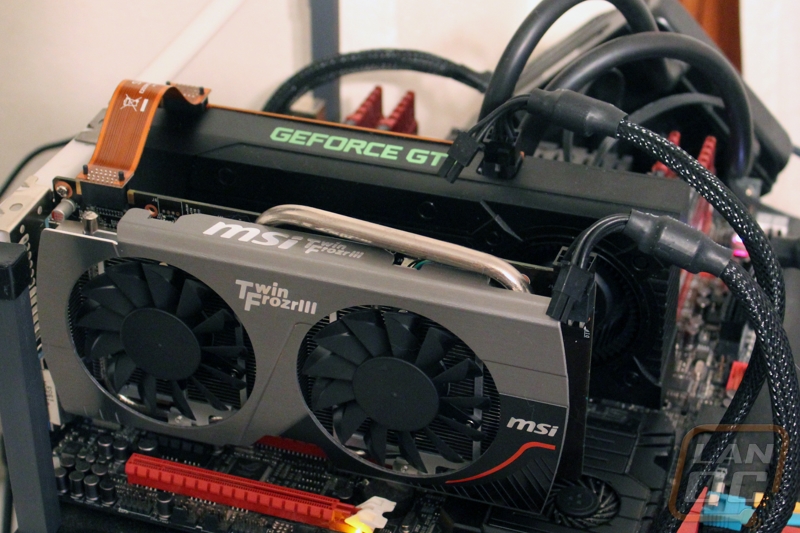 Unreal Heaven Benchmark 4.0 heat testing We run through Unreal Heaven at 1080p for 30 minutes to test in game heat performance and noise output of the card while under load.

Power Usage Using Unreal Heaven Benchmark 4.0, we get our “load” power usage number from the peak power usage during our test. We get our numbers from a Kill-A-Watt connected to the test benches power cord.

Noise Testing Our Noise testing is done using a decibel meter 3 inches away from the video card on the bottom/fan side of the card. We test an idle noise level and then to get an idea of how loud the card will get if it warms all the way up we also turn the fan speed up to 100% and test again. The 100% test isn’t a representation of typical in game noise levels, but it will show you how loud a card can be if you run it at its highest setting or if it gets very hot.

Going completely off our previous power testing on the MSI card and the reference card I had an idea of where we would fall with SLI numbers. Of course that would be assuming that both cards are under load the same and as great as SLI is, there is still the possibility that both cards aren’t under the same load. In our case we saw the load wattage draw jump up to 428 watts, 109 watts over the reference card load wattage. That isn’t the full wattage that a card should pull, but it is still not bad. Even more impressive is that our whole test bench with an Intel 3860X, SSD, Hard drive, motherboard, and even water cooling along with TWO video cards. I was also happy with the power draw at idle, with two cards in SLI the idle draw wasn’t much more than a single card.

With our new Fire Strike benchmarks especially, I was very interested to see the SLI results. In the Fire Strike benchmark we saw an increase of 81% over a single card. Even more impressive was the increase we saw with 3DMark 11’s under the performance section. We went from a score of 5328 to 10517, an increase of 97%! It’s clear that Nvidia has a little more tuning to do with their SLI profile on the latest 3DMark but with last year’s 3DMark 11 is clearly tuned perfectly.  Our Unreal Heaven Benchmark 4.0 results are right up there as well with SLI pulling 50.3 FPS vs 27.3 FPS.

Our in game benchmarks are very interesting to see. There are a few cases where Nvidia has made big improvements on their drivers in the time between our GTX 660 SLI testing and now and we actually see the GTX 650 Ti Boost SLI numbers just above the GTX 660, Batman Arkham Asylum and Sniper V2 Elite to be specific. What I was especially impressed with was how the two cards held up against the GTX 680 in Battlefield 3 for example. Considering what two cards will run you, they are a steal compared to the GTX 680. 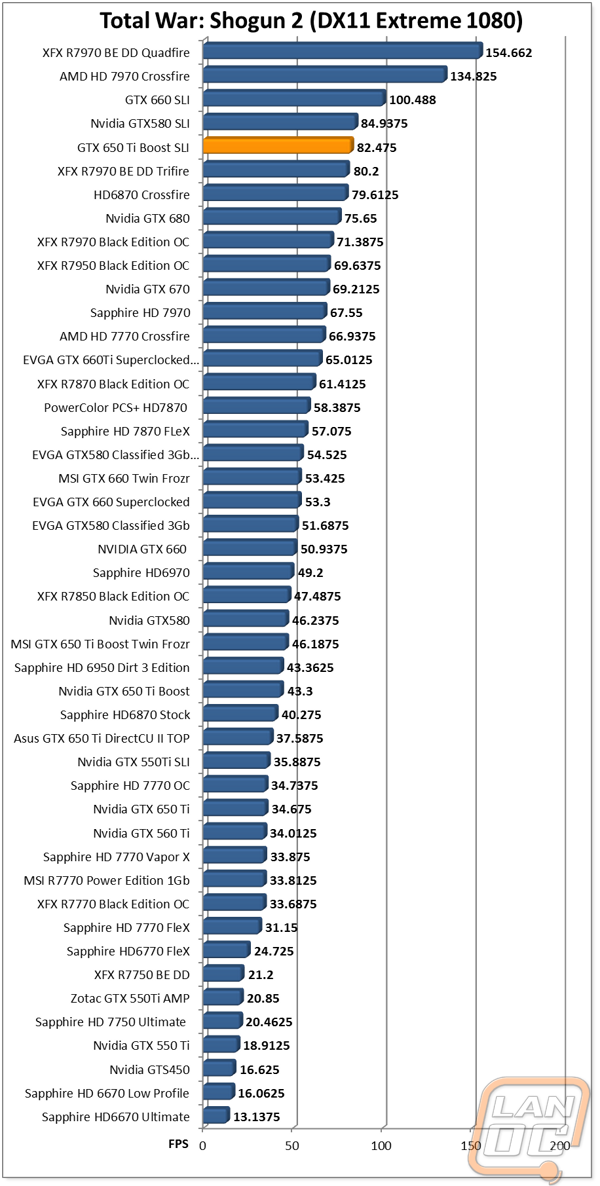 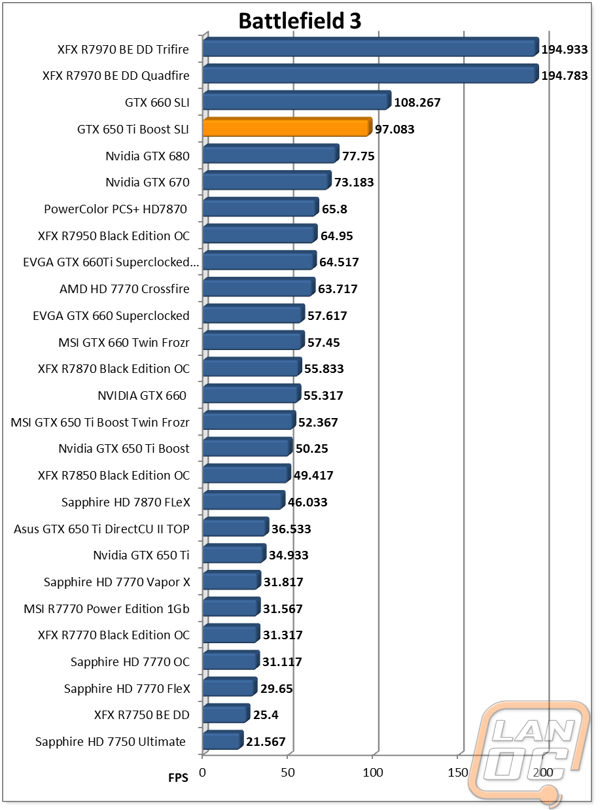 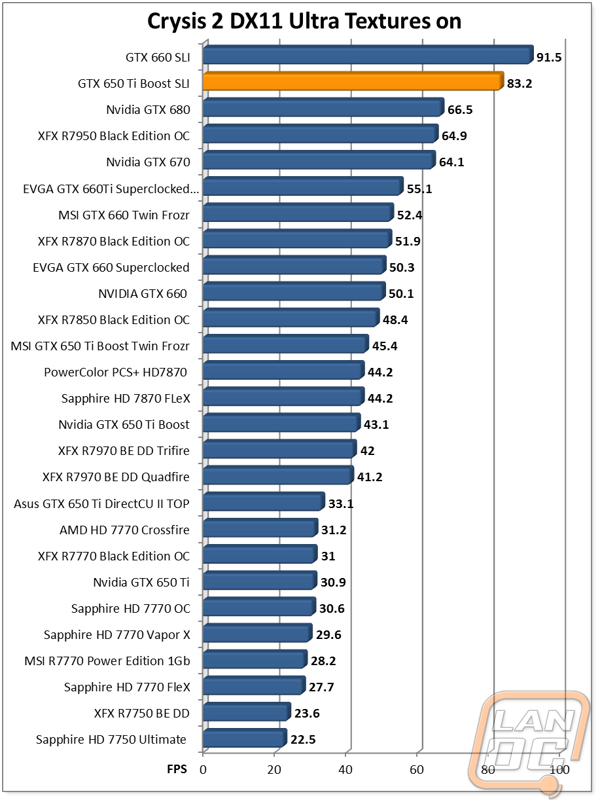 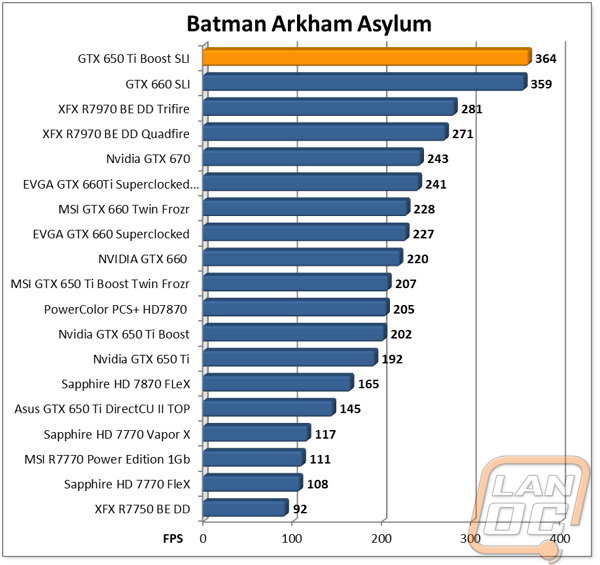 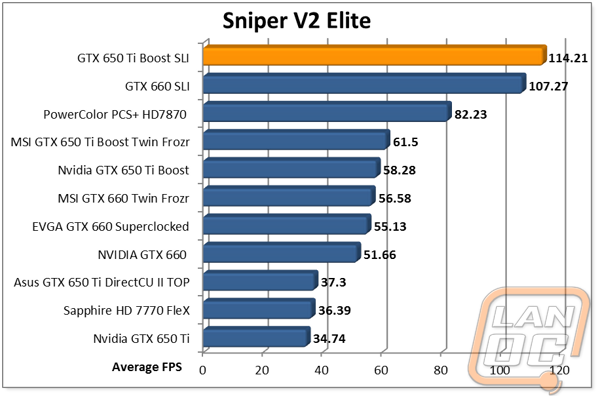 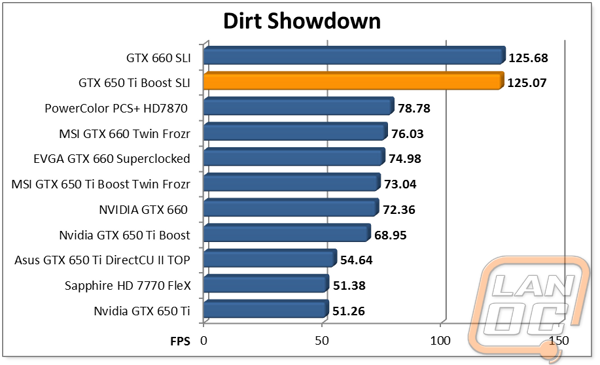 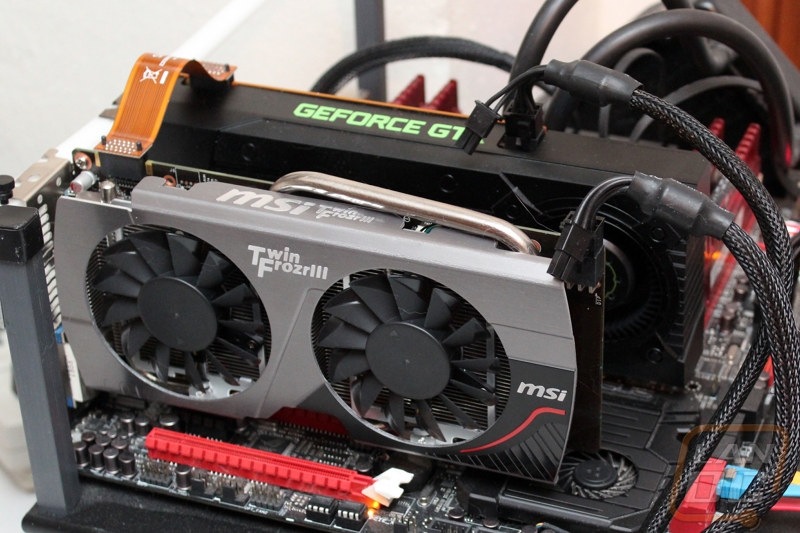 SLI and crossfire testing is always surprising to me, its always interesting to see what you can get when you pair up a couple lower end cards. In this case we ended up with performance up and over the GTX 680 with two GTX 650 Ti Boosts. The lowest price I could find on a GTX 680 currently is $439.99 and the lowest price on a GTX 650 Ti Boost as of this writing is $169.99. That puts the SLI at 339.98 a whopping $100 less than what it would cost you to get a GTX 680. Of course going with SLI now means you won’t have room to upgrade later, but if you can’t afford a GTX 680 right now you could get a GTX 650 Ti Boost now and pick up a second one when you have the money to get performance over the GTX 680.

There are a couple things to consider with going with this setup over a more powerful video card. First, if you like to play games when they first launch you aren’t going to see the best performance until SLI drivers are tuned and in some cases there might not be SLI at all for a few weeks. Going with two cards means you will need a larger PC, those of you who are interested in small form factor builds should still be looking at a single card. As someone who has run almost every variation of crossfire and SLI day to day you will also most likely run into small quirks here and there with the drivers and micro stuttering as well.

Personally I would still be considering a pair of GTX 650 Ti Boosts for a build. Not only are you going to get a better price, but you are also going to get a performance increase over the GTX 680 or HD 7970 that will make it worth your while. 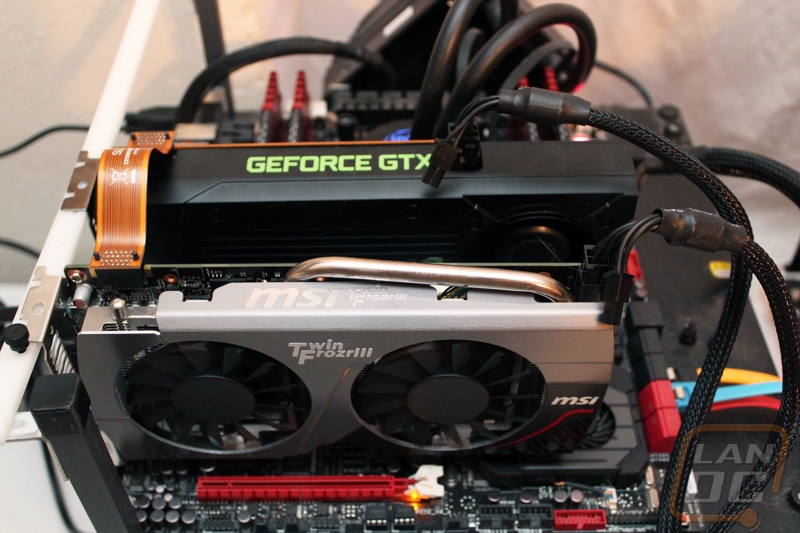 You might call him obsessed or just a hardcore geek. Wes's obsession with gaming hardware and gadgets isn't anything new, he could be found taking things apart even as a child. When not poking around in PC's he can be found playing League of Legends, Awesomenauts, or Civilization 5 or watching a wide variety of TV shows and Movies. A car guy at heart, the same things that draw him into tweaking cars apply when building good looking fast computers. If you are interested in writing for Wes here at LanOC you can reach out to him directly using our contact form.
Discuss this article
Log in to comment
Posts in discussion: GTX 650 Ti Boost SLI

We have 736 guests and one member online