Frankly having tested both the GTX 660 Twin Frozr card and the GTX 650 Ti Boost reference card I had a good idea of what to expect with the MSI GTX 650 Ti Boost Twin Frozr 2Gb OC Edition. The Boost is a good card as is, adding top-notch cooling performance and a nice overclock to the card is only logical. The performance of the MSI GTX 650 Ti Boost Twin Frozr 2Gb OC Edition is a slight bump up over the reference design and puts its performance event closer to the GTX 660. In some cases we see it out performing the HD 7850, and in the cases where it didn’t the gap isn’t too far off. My only complaint with the performance really was with the potential for the twin fan design to be loud. When you turn them up to 100% they do get noisy, but frankly even in our benchmarks it was never an issue. The cooler design keeps things cool and the card never needed to crank the fans up.

On top of all of that, MSI also has their Afterburner software that is free for use on their cards. By including such a feature filled program they are adding additional value to the card itself. Not only do you have options to tune and watch the performance of your MSI GTX 650 Ti Boost Twin Frozr 2Gb OC Edition, but you also get features like in game recording and even support for wireless control via iOS and Android. MSI also included all solid capacitors on the Twin Frozr 2Gb OC Edition meaning you shouldn’t have issues with your card for a VERY long time (they say 10 years or longer under full load).

You also get the $75 dollar in game currency coupons for free to play games Hawken, Planetside 2, and World of Tanks as well. This helps justify the cards $179.99 selling price but frankly I think for the performance you are seeing this still isn’t a bad price, even without the bonus in game credits. All in all the MSI GTX 650 Ti Boost Twin Frozr 2Gb OC Edition is a good buy, as long as you can get over that extremely long name ;). 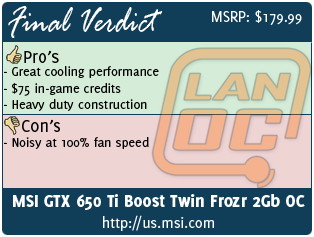 You might call him obsessed or just a hardcore geek. Wes's obsession with gaming hardware and gadgets isn't anything new, he could be found taking things apart even as a child. When not poking around in PC's he can be found playing League of Legends, Awesomenauts, or Civilization 5 or watching a wide variety of TV shows and Movies. A car guy at heart, the same things that draw him into tweaking cars apply when building good looking fast computers. If you are interested in writing for Wes here at LanOC you can reach out to him directly using our contact form.
Discuss this article
Log in to comment
Posts in discussion: MSI GTX 650 Ti Boost Twin Frozr 2Gb OC Edition

We have 1349 guests and no members online