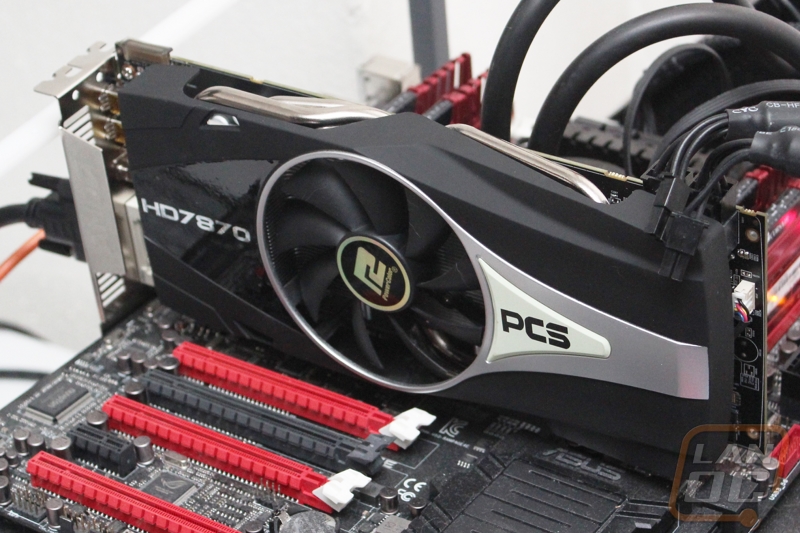 At the end of the day I found myself both impressed and disappointed with the PCS+ HD7870. The performance numbers that we saw both in game and in synthetic benchmarks were impressive. AMD has obviously come a long way with their drivers over the past year for the 7000 series cards. Along with that the cards have come down in price and gone up with Ghz as well. That means that for those of you who waited, you are without a doubt getting better performance for your money than what you would have when the HD7870 launched. The PCS+ HD7870 is priced at 234.99 currently, but it also has a 30 dollar rebate. On top of that, you are going to get the latest Bioshock and Tomb Raider games.

I know for some of you, getting those games may not be a big deal. But let’s say you already had planned on getting those two games, you are looking at a savings of 109.98. Combined with the rebate, that brings the cost of the card to $95.01 dollars. Yes I am serious $95 dollars! Frankly ignoring the two free games, you still have a good value. I think PowerColor and AMD have found the perfect sweet spot of performance/value. You are getting a card that is going to run most games at over 60 FPS while coming in at a price that is less than what you would spend on four new games or less than what our Contributing Editor Adam spent on LoL skins this year.

The PCS+ HD7870 isn’t without faults though. I wasn’t all that impressed with its cooling performance. It will get the job done, but it really could use a second fan. On top of that it vents its hot air into your case, meaning you will need to make sure your case can keep up and vent that air out before it heats up other components. All in all though, I would still jump all over the card. Bioshock and Tomb Raider are both looking to be amazing games and paired up with this card you should be able to play them perfectly as well. 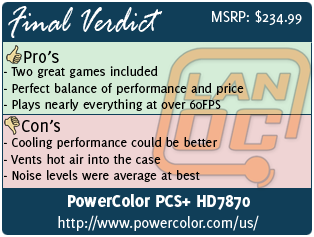