We here at LanOC Reviews are always looking to tweak and adjust our testing procedures to both fit what our readers (you) are using your PC’s for and on as well as finding effective tests to show you accurate results. Our first change for 2013 is in our temperature testing. We have always used Furmark to put a video card under load and used that to get our temperature readings as well as noise testing. Starting with this review we are changing to the Unreal Heaven Benchmark to put the cards under load. Furmark puts the cards under an unnatural load that isn’t exactly what you would see in game. That same load sometimes causes cards to lower its power output to compensate for example. Our new test is a 30 minute long loop of the Heaven benchmark. This gives heat more time to build up, but it also gives us a more accurate in game reading.

Considering we don’t have other results to compare the PCS+ HD7870 to, we ran it through both tests. Interestingly our results were actually the exact same at 73 degrees. Where does that put us compared to other cards? Well this card’s temperature under load is just under what we saw with the GTX 680 with a stock cooler and just above the dual fan XFX R7870 Black Edition. In other words the cooling performance wasn’t anything to write home about, but it was effective enough to get the job done without overheating. If you are extremely worried about your temperatures I would highly recommend looking at the next step up with dual fans or something similar. 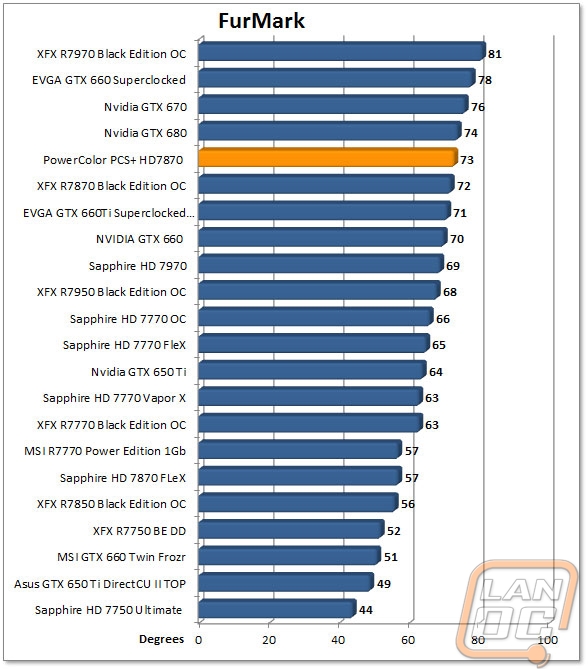 How was the noise output? Well with a single fan it wasn’t as bad as we have seen on other cards like the XFX cards, but I also can’t really call the card silent as well. With the card getting a little warm, along with that it also had to keep its fan spinning quickly to keep things under control. Higher fan speeds mean more noise. The noise output was in line with a reference cooler, but considering the non-reference cooler I would have liked to of seen it out cool or be quieter, one or the other.

We have 527 guests and one member online