At first glance, the PCS+ HD78070 almost looks like it is in black and white. The fan shroud is mostly black with a silver trip around the fan going out to the end of the case. Most of the shroud has a rubberized finish on it, something I haven’t seen on other video cards. The sticker on the left side of the fan on our card did have a weird look to it, I’m not sure if maybe the sticker on ours was defective but the black almost looked rubbed through in area’s along with a few large bubbles under it. 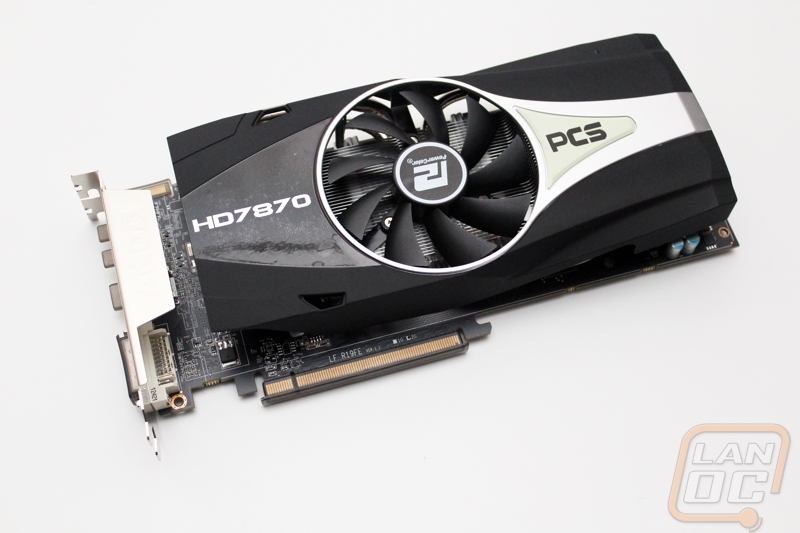 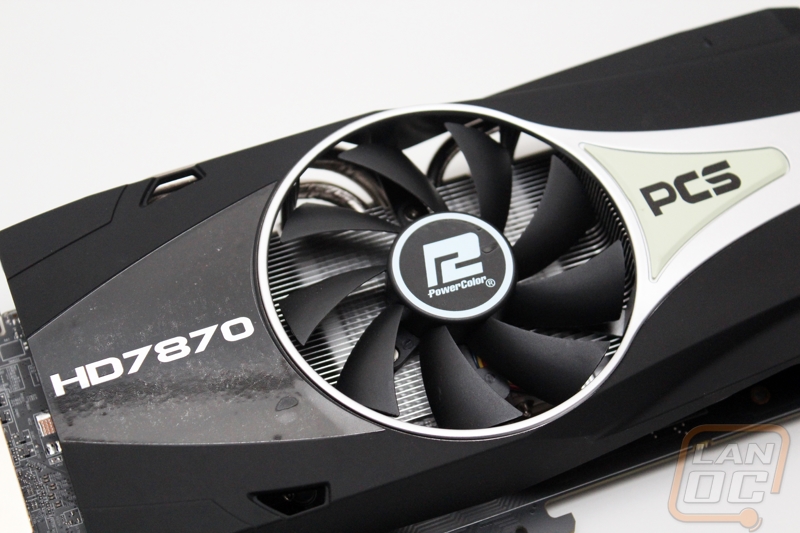 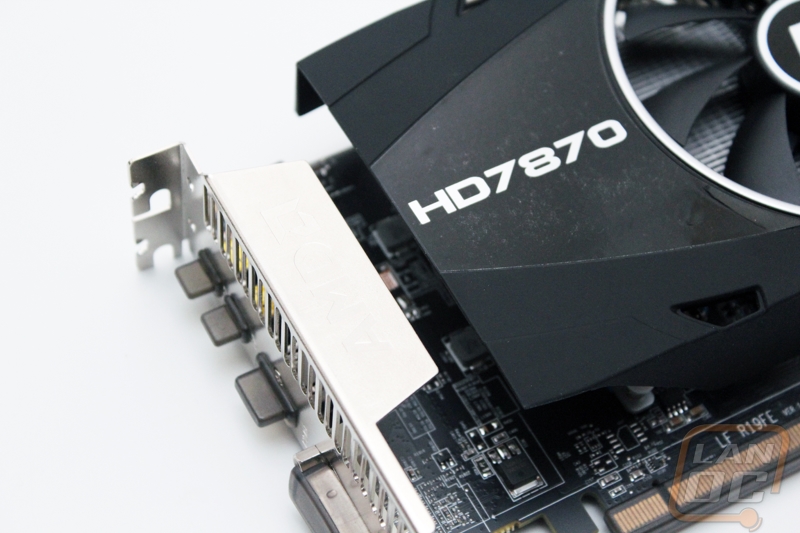 There is one 92mm fan in the middle of the card that does the cooling for the entire heatsink. The fan shroud helps spread the heat over the rest of the heatsink as well. The downside to this design is that it vents into the case. A reference design and some other video cards will vent out the back of the case preventing the heat from building up inside of your case. 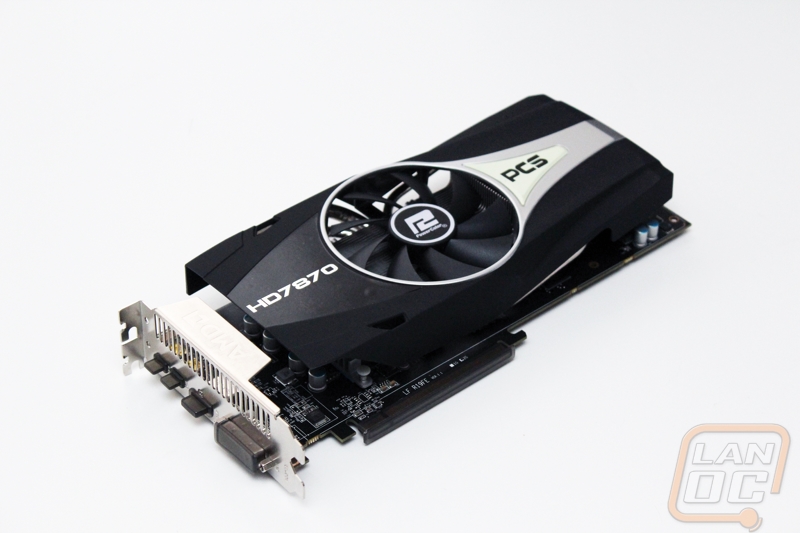 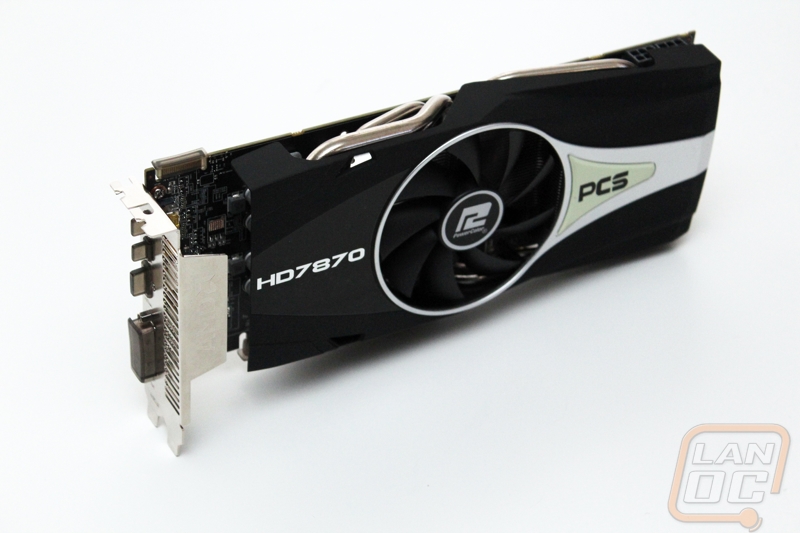 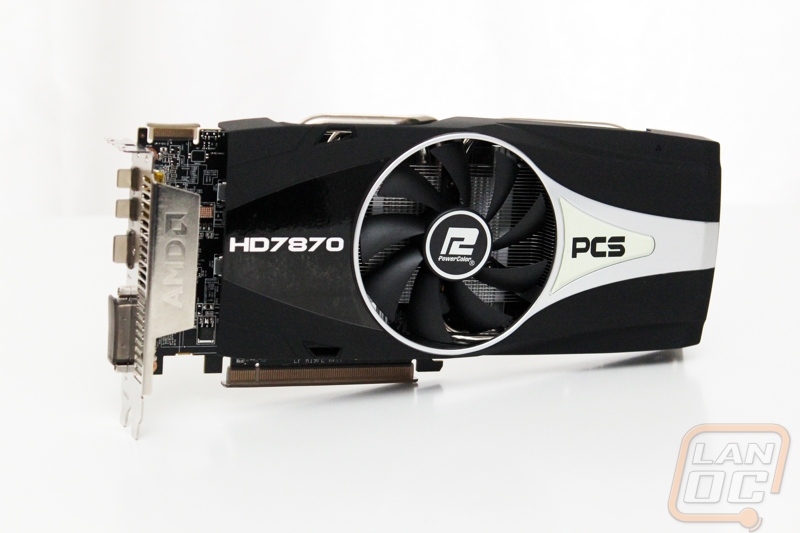 On the rear PCI slot we have a nice mix of connections and cooling. A lot of cards have been dropping some of the ventilation in favor of more room for rear connections. Ironically, this being a card that vents into the inside of the case they could have actually done just that without any issue. You get a Dual link DVI connection, and HDMI connection, and two mini DisplayPort connections. Like the crossfire and PCI slots on this card, they shipped everything covered up with individual covers. 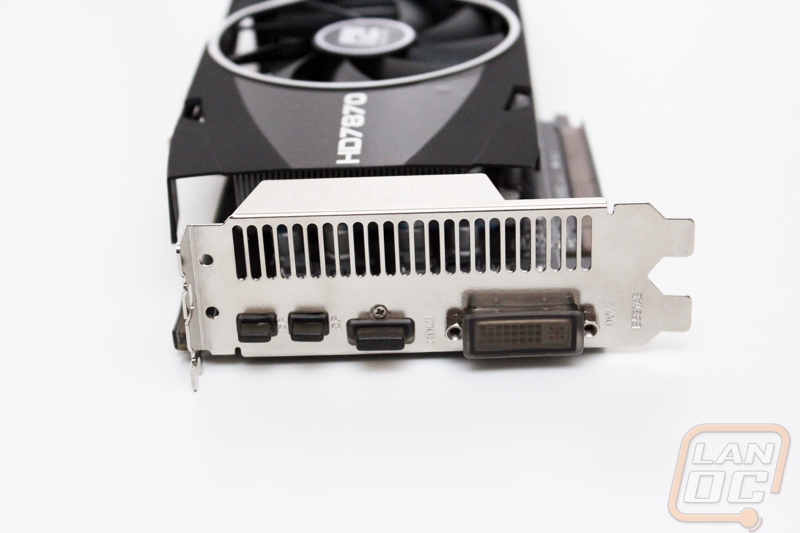 I love that PowerColor went with a black PCB on the PCS+ HD7870. In the past this is only something we have seen from a few manufactures and considering the PCB is more visible than the fan shroud in most cases you would think more manufactures would consider making it look good. 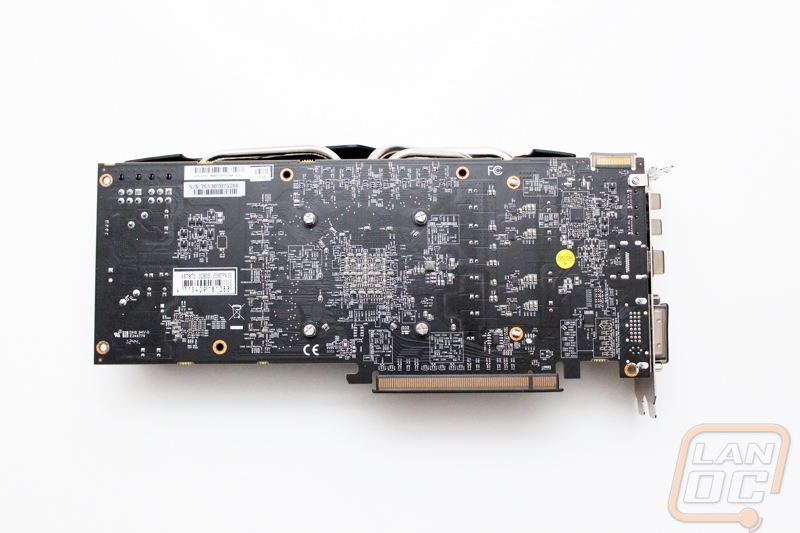 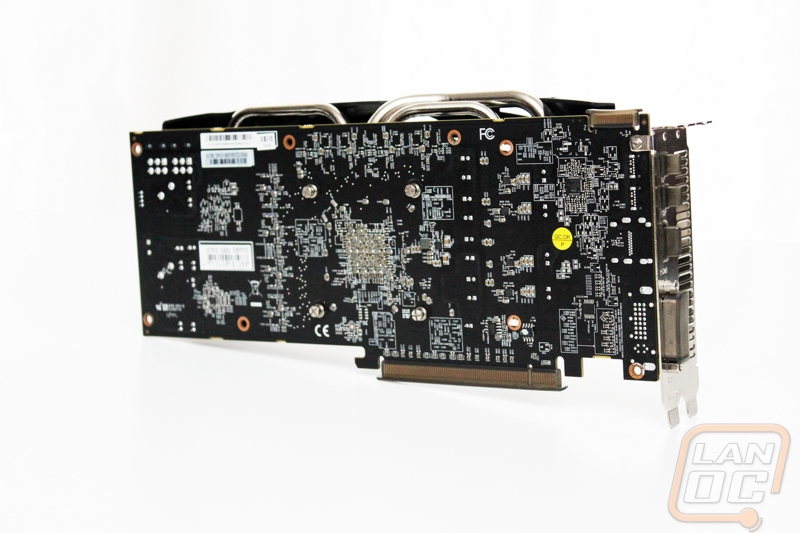 The top of the PCS+ HD7870 had three heatpipes across the top, one being extremely thick. This view also gives a little peak at the cards heatsink. 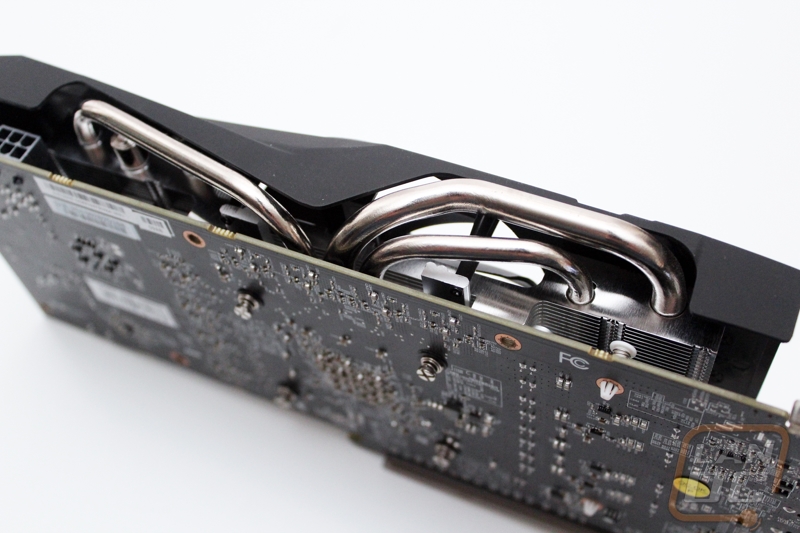 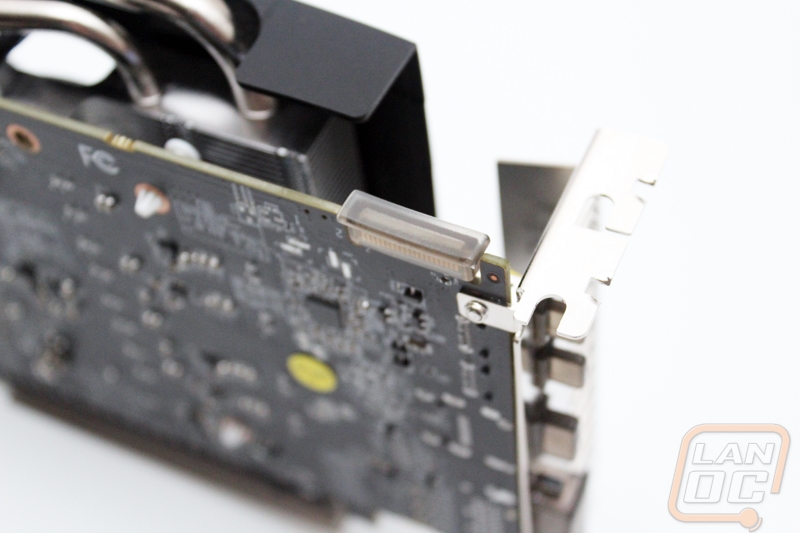 For power, the PCS+ HD7870 requires two 6 pin power connections. They face up, so cases with limited card length won’t have issues but that does mean cases that don’t have much cpu heatsink height clearance could have issues with the power cables being pushed up near/on the side panel. 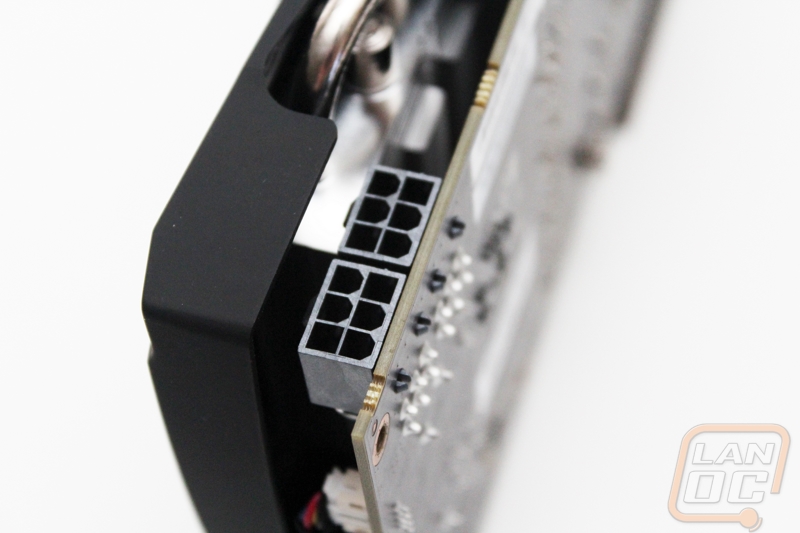 From the bottom view you can see just one heatpipe, this is a big difference from the top of the card as you have seen. This is also a good view of the air gaps around the fan shroud as well. 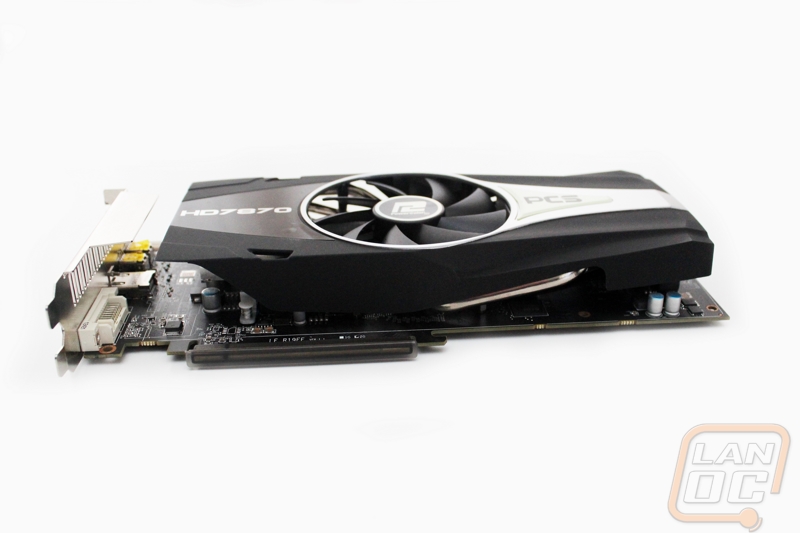 We have 595 guests and one member online