Now that we have seen all of the various stock and overclocked versions of the HD 7000 series cards, some of the more interesting variations are starting to trickle out. A good example of this is from Sapphire, not only do they have a WIDE variety of versions. They are actually introducing a new card today, the Sapphire HD 7870 FLeX. For those of you who have been around for a while, you have seen us cover their FLeX lineup before. With the FLeX lineup allowing you to run three monitors in Eyefinity without any active adapters, it is perfect for someone who is already running multiple monitors. As we have seen in the past, if you plan on gaming in Eyefinity you need to have the power to push your favorite games, the HD 7870 is the fastest FLeX card we have tested to date, if any card can do it, it should.

The packaging for the HD 7870 FLeX Edition isn’t really much different than what you would see Sapphire’s other models in. The only thing that separates it is the flex edition sticker up in the top right corner. 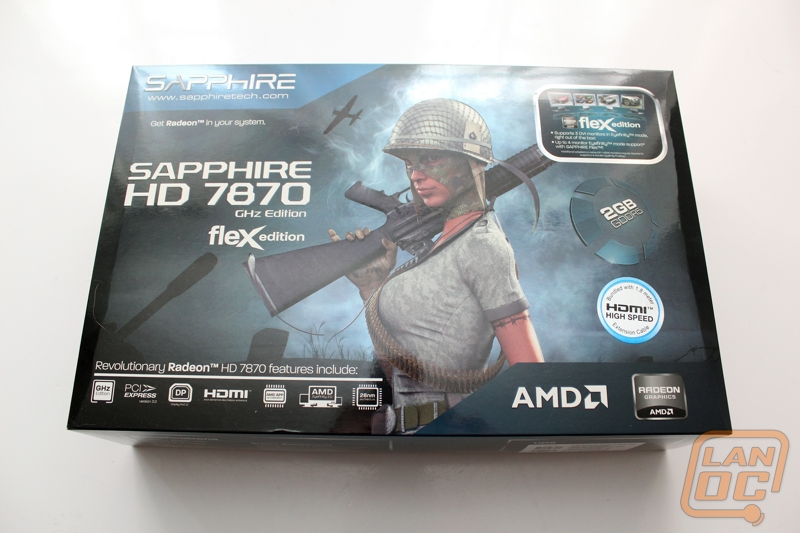 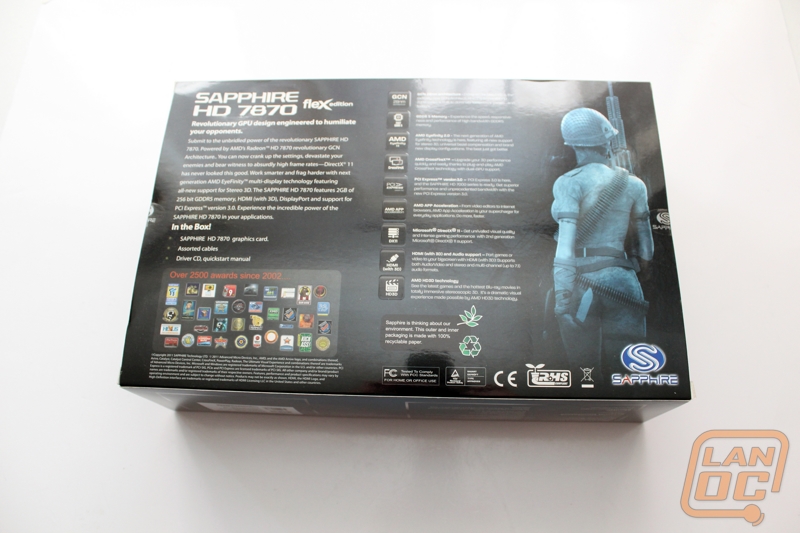 Inside the card is wrapped up in the padded static free bags that Sapphire always uses. The card is sitting in a formed cardboard tray to keep it from moving around. 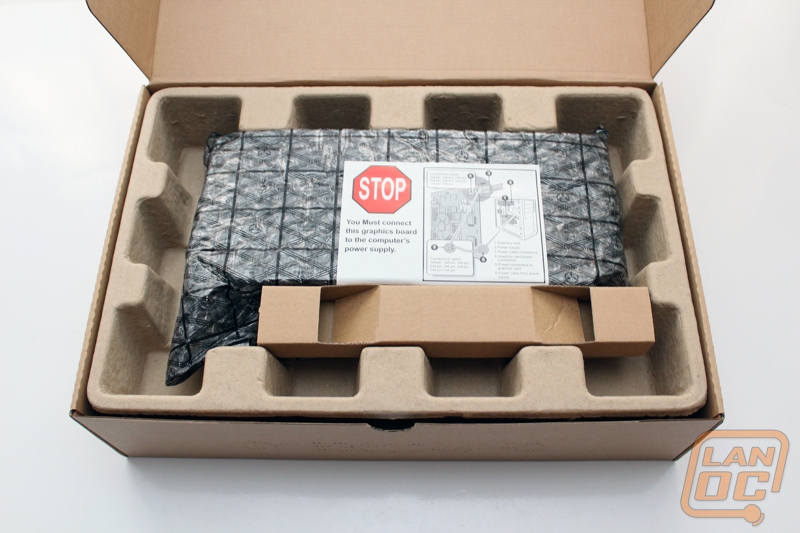 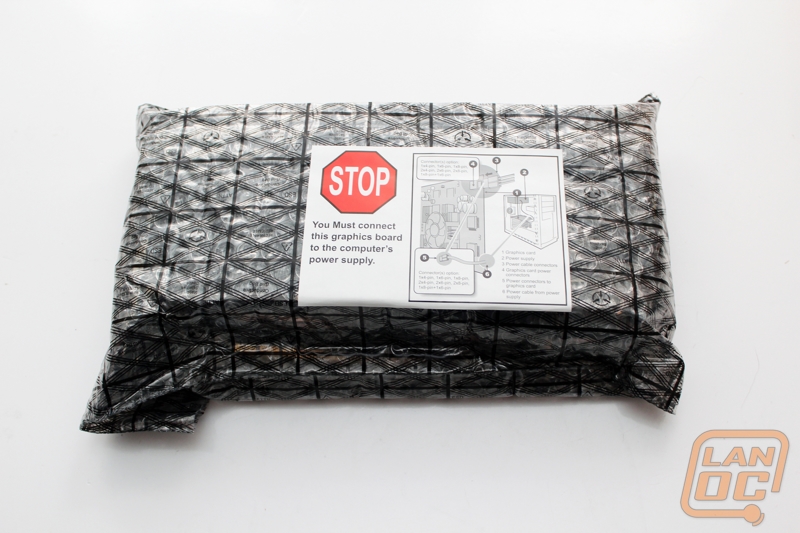 Under that tray there is another box with the cards accessories and documentation. The card does come with a driver disc but I would still recommend that you download the most recent drivers from AMD. For documentation you get a registration card as well as an installation guide. For accessories you get two molex to six pin adapters, a crossfire bridge, DVI to VGA adapter, HDMI to DVI adapter, and an HDMI cable. The HDMI to DVI adapter gives you a total of three DVI connections for those looking to run Eyefinity with monitors that don’t support HDMI. The HDMI cable being included is great to see as well, always adding to the cards value. 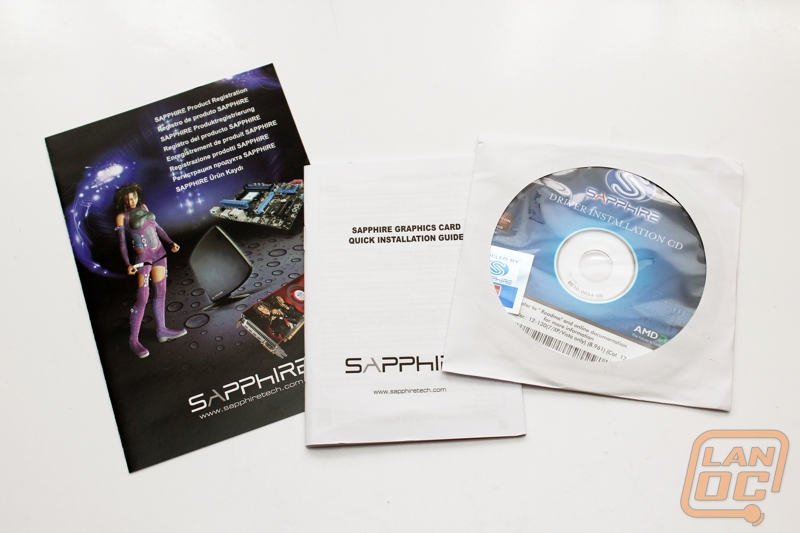 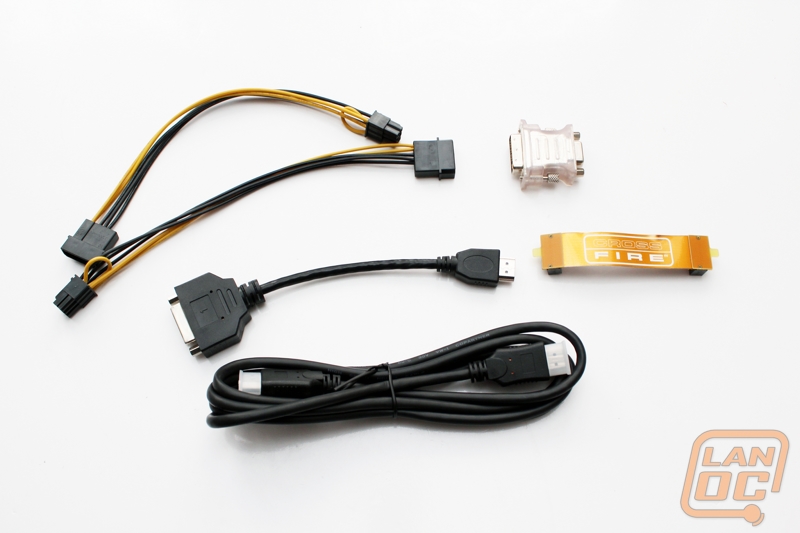 The cooler on the HD 7870 has two large fans with the flex logos on each. This is actually the only place where you can find flex labeling on the card. This is because this is the same cooler Sapphire went with on their other HD 7870’s as well, called the Dual-X cooler. Why change it up if it works right? The plastic shroud has a nice look to it, standing out from reference designs. Up top there is a nice Sapphire HD 7870 sticker letting people know what card you are sporting when it’s in your case. You will also notice up top that this card has just one crossfire connection meaning you can’t run three or four in crossfire. 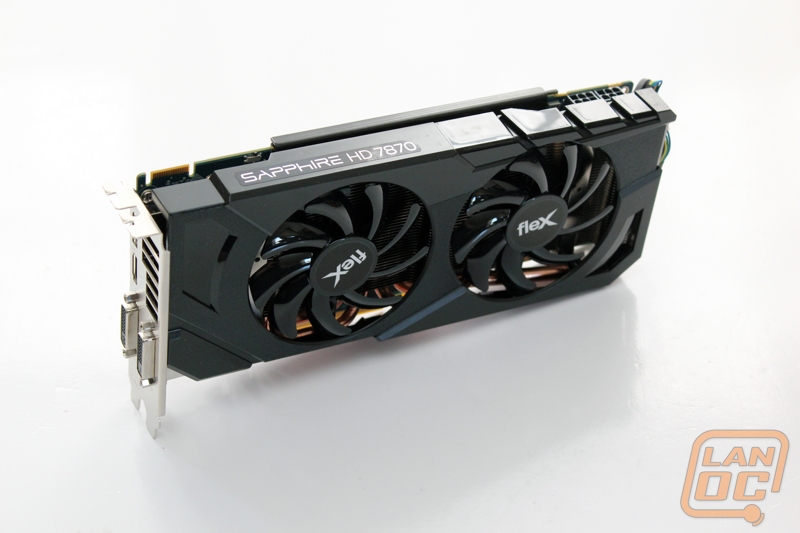 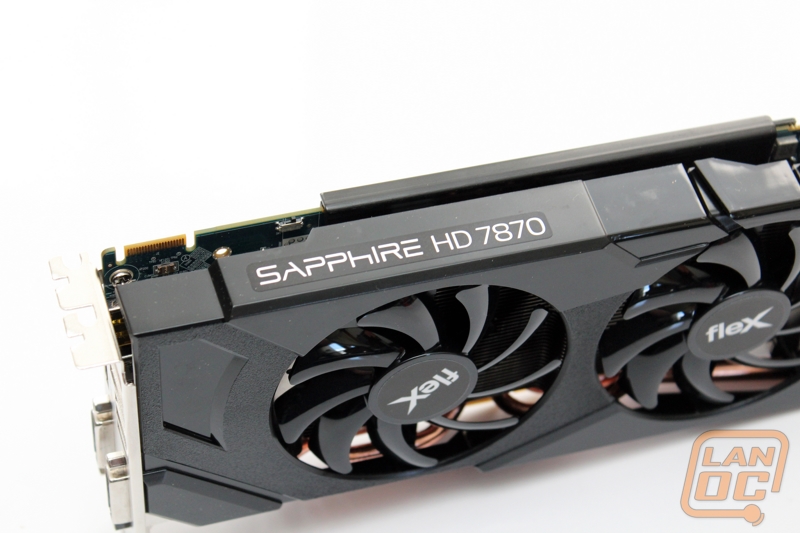 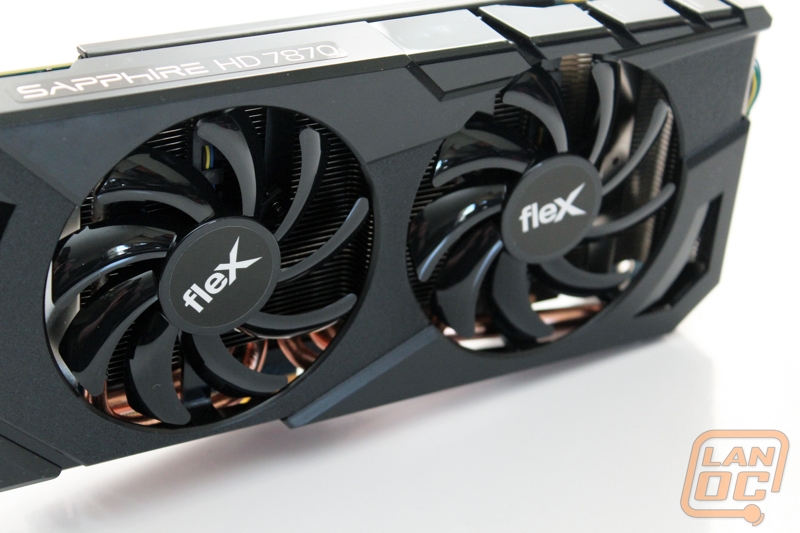 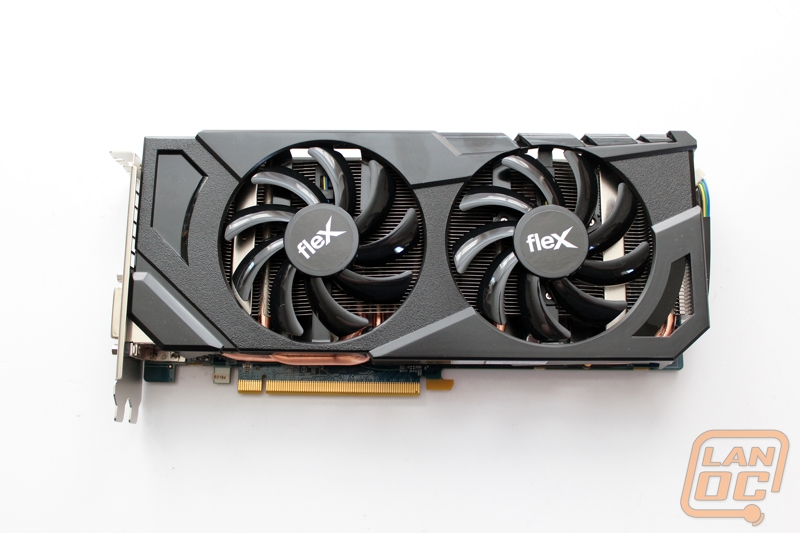 The view from the bottom shows off the cards massive heatpipes. Sapphire pulls the heat from over the GPU to the outside of the heatsink for the most efficient cooling. 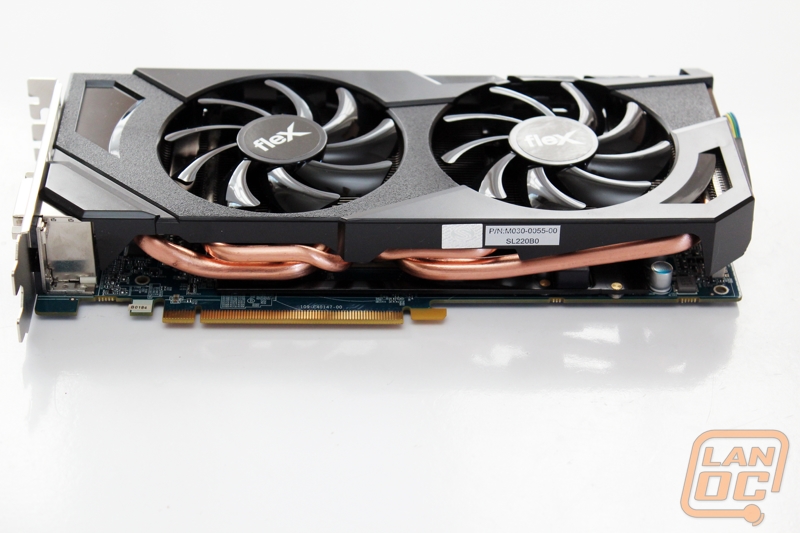 For power, the HD 7870 is sporting two six pin connections. If you don’t have enough on your power supply Sapphire did provide the two adapters to use. I love that each adapter only requires one molex connection as well, most take two. 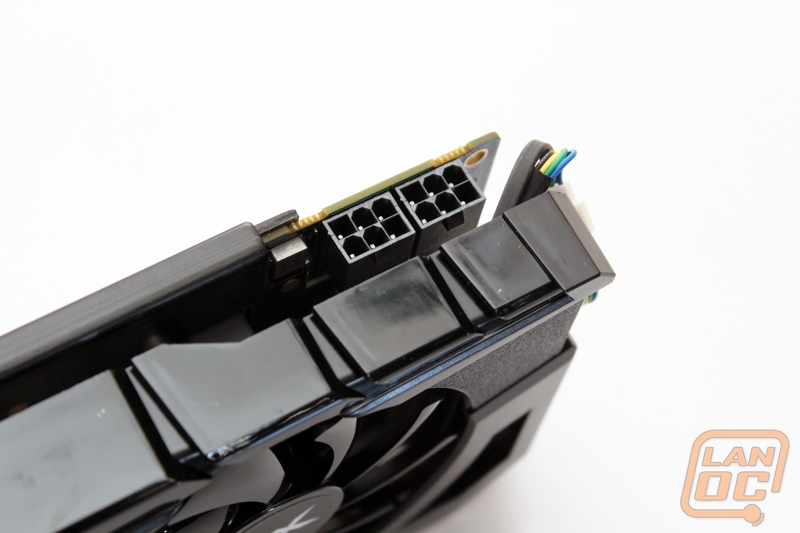 The Flex edition stands out a little bit from other sapphire cards with its connections. You have two DVI ports (one Dual-link and one Single-link), you also have a full sized DisplayPort, and a full sized HDMI port. Because this is a FLeX card you can use all four of these ports in Eyefinity, giving you three non-display port connections. 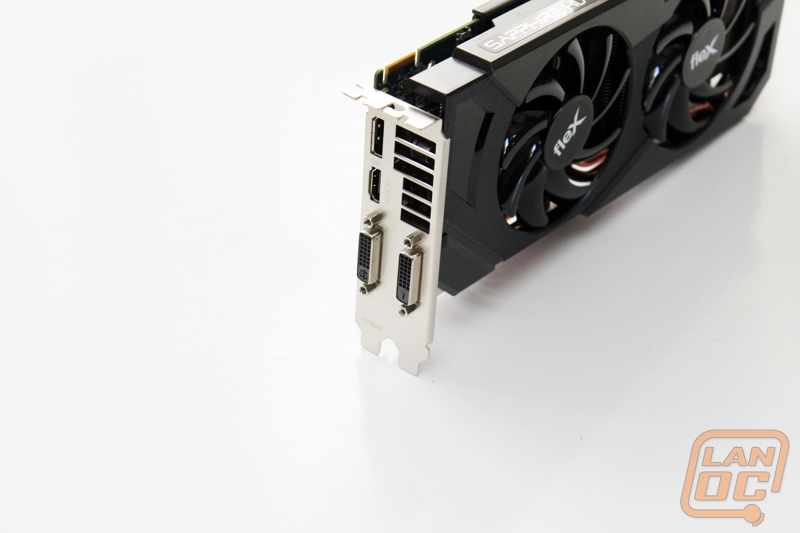 The HD 7870 FLeX Edition has a blue PCB like other Sapphire cards. From around back you have a good view of an interesting support along the top of the card as well. This helps with mounting its heatsink and also gives the hard support to prevent sagging over time. 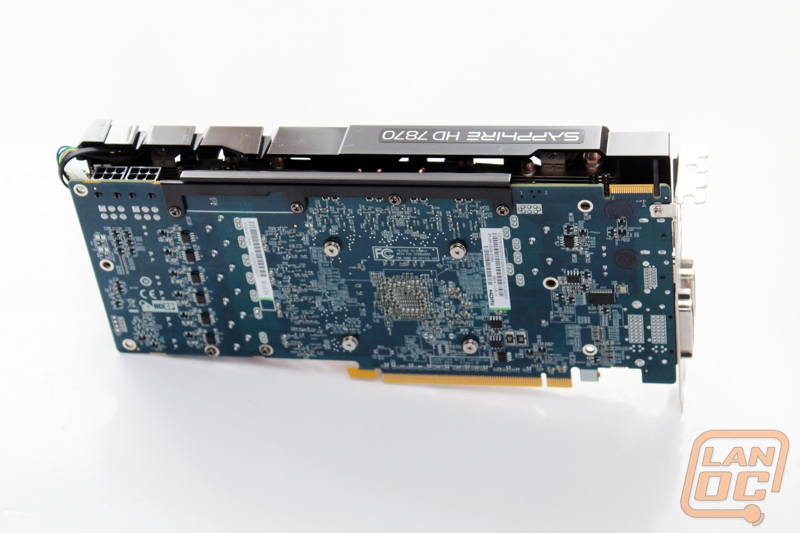 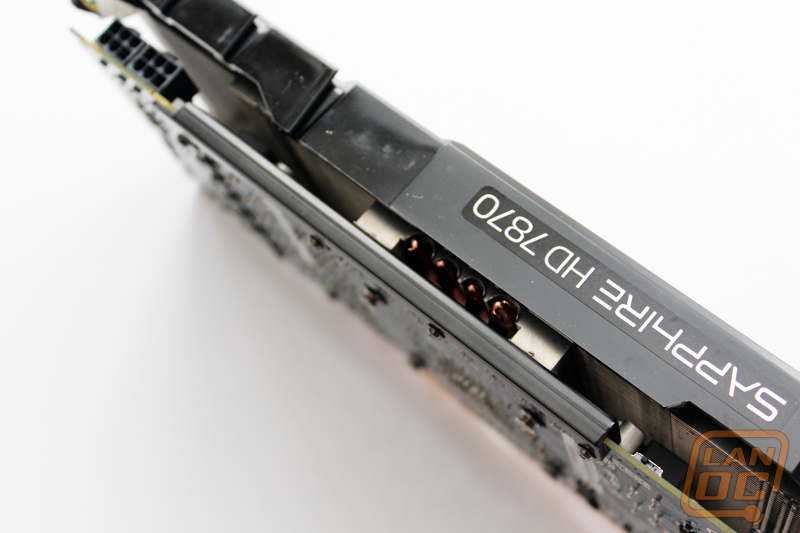 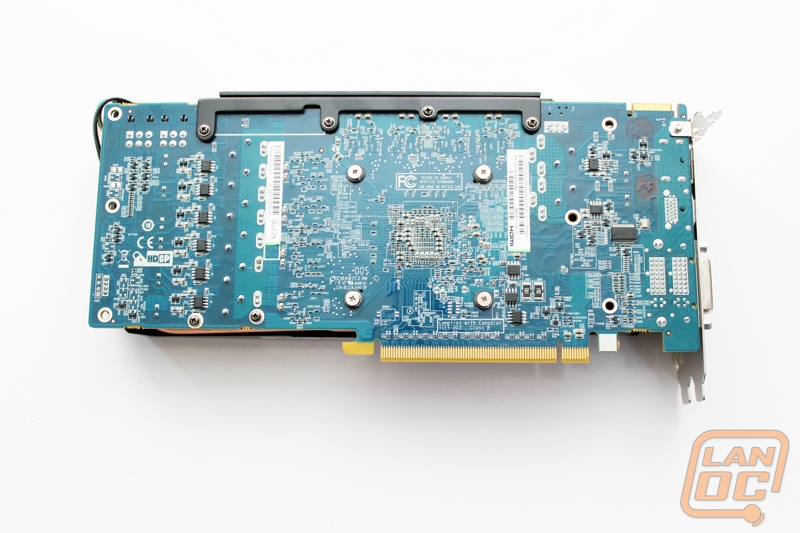 The end of the card is open meaning it will blow some of the cards heat back into the case. This is fine in some cases but if heat is already an issue putting more heat into your case may be an issue. 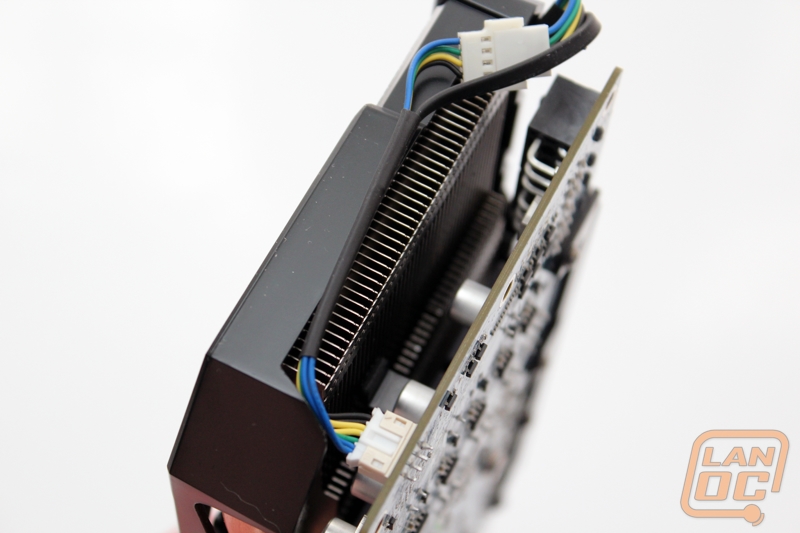 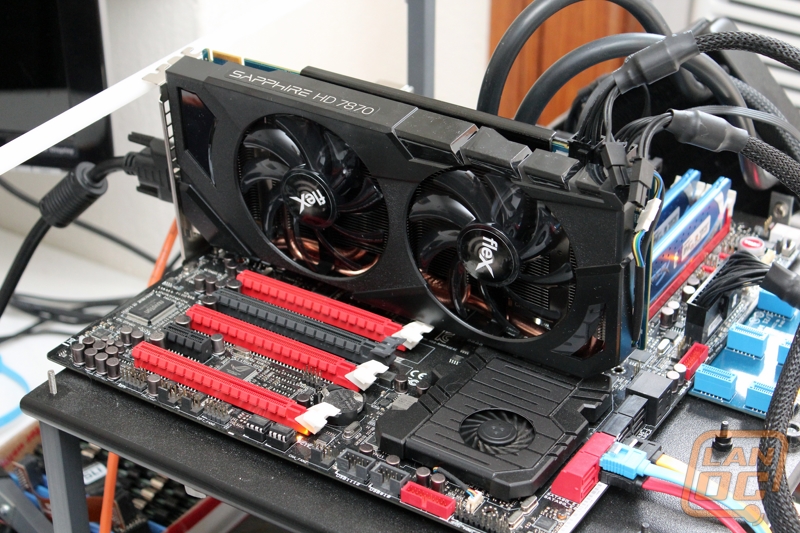 Most games can heat up your video card but if you really want to put it to the test Furmark is one of the best ways to push a card beyond what it really should be. This isn’t great for your card, but it’s the best way for us to show you guys how the video card will cool in the most extreme situations. The HD 7870 FLeX has those massive heatpipes, because of that I wasn’t all that shocked when I saw the results. Sapphires cooler did an amazing job keeping the card cool and even more impressive was the lack of any loud fan noise when doing out testing. 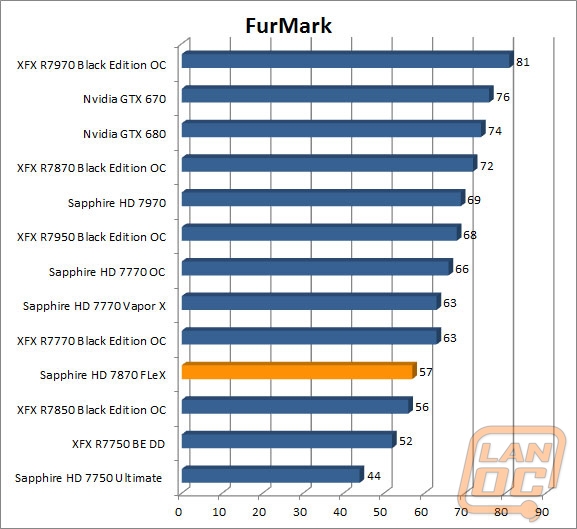 Putting cards to the test in 3DMark won’t give you any reference on how well it will perform in game, but when comparing cards they are a good hands off way to compare with fairly accurate results. We use both 3DMark 11 and 3DMark Vantage in performance and high/extreme settings. In this case our results put the 7870 FLeX in just below our GTX 580 Classified results, any card that holds its own against it should be proud.

In game performance between different game engines really varies depending on Nvidia and AMD, each manufacture works very closer with different game developers to try to have the best optimization. Because of this it really depends on the game that you are looking to play as you will see in our results. For the most part the HD 7870 FLeX came in just below the GTX 580’s other than in a few games that are little more optimized to AMD cards like Shogun 2. We did also see a few interesting results when comparing HD 7870/7850’s along with the overclocked variations. In a few cases the overclocked HD 7850 outperformed this card. I believe this is a combination of the overclock and driver changes that we have seen lower performance in games slightly. We will actually be doing a small driver comparison soon, keep an eye out for that as well.

Anyhow what really is important with the HD 7870 FLeX will play every single game that we benchmark with gave us playable framerates (30 fps or more). In almost every one of those cases they were well beyond playable meaning over 100+ FPS. This is just in 1080p of course, pushing three times that resolution (for Eyefinity)is going to mean a few of the most demanding games will need a little adjustment in the settings. But games like dirt 3 will play fine. 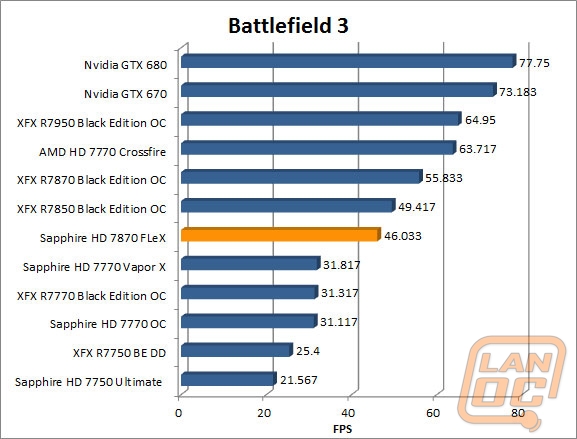 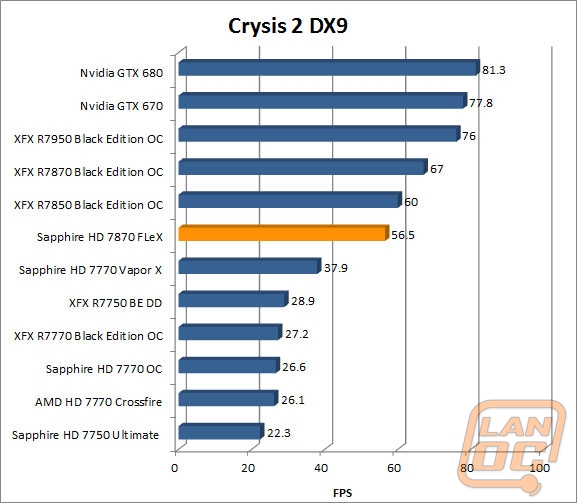 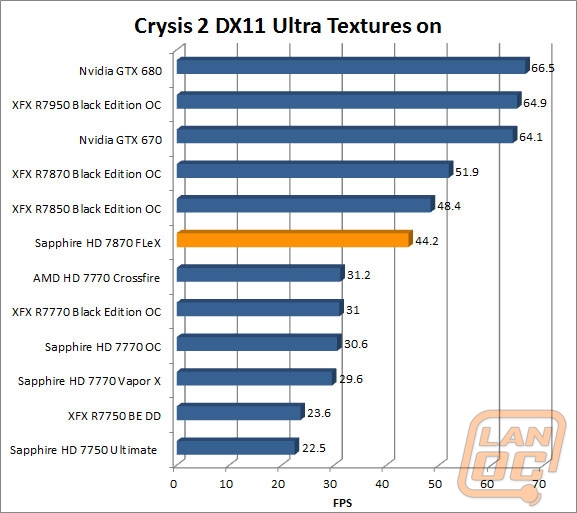 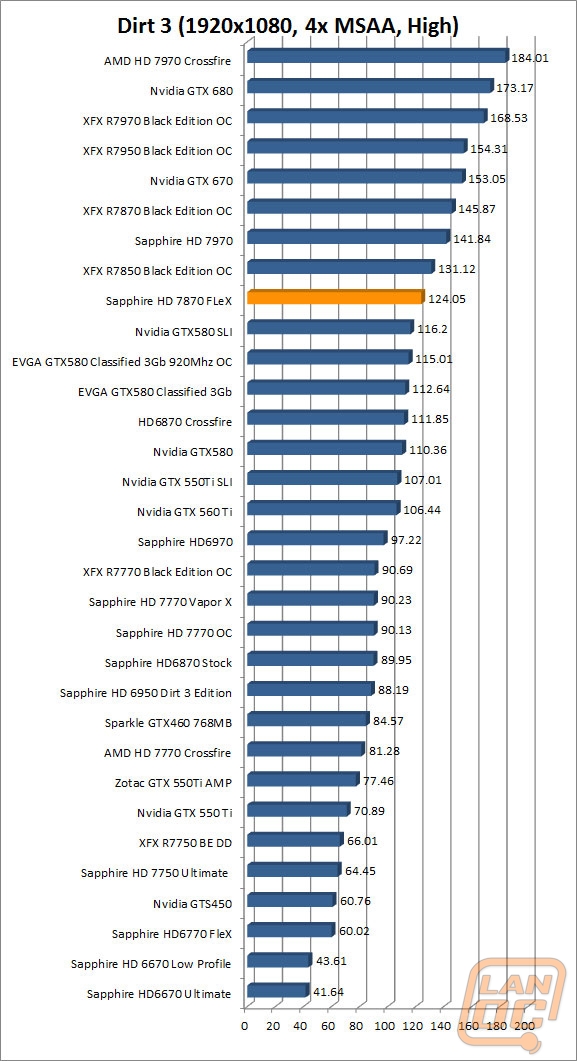 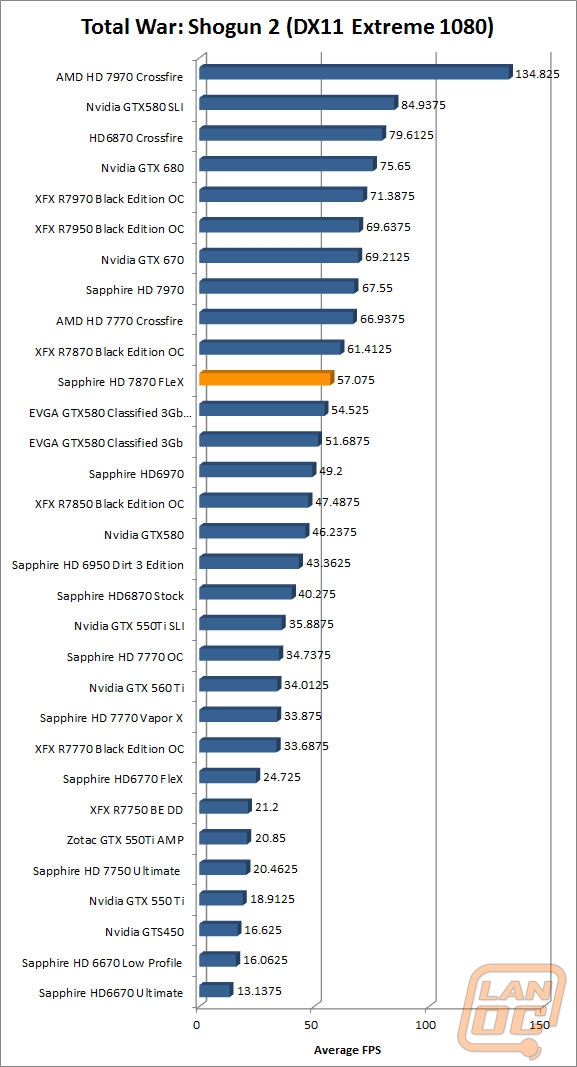 We know the Sapphire HD 7870 FLeX’s cooler performed nearly perfect, and the card itself has the power to play all of the games in our test suite without any issues. Now it’s time for us to put all of the cards features, performance, and price all together to see how it all comes together. Sapphire basically took one of their standard cards with their Dual-X cooler and packed in the ability to run Eyefinity without an active adapter. If you are planning on running Eyefinity without Displayport monitors, this alone has saved you a few bucks. On top of that you get an HDMI cable to boot as well as more DVI connections.

They are planning on selling the card at around $355, about 20 to 30 bucks more than some of the cheapest reference HD 7870’s and in line with some of the overclocked cards. The truth is this card isn’t for everyone, but for those planning on Eyefinity this is an amazing deal. If not, I would be looking at Sapphires overclocked cards; they have the same Dual-X cooler that performed perfectly for us here along with a boost in performance. Either way, Sapphire has given everyone great options like the HD 7870 FLeX, what will be your next GPU? 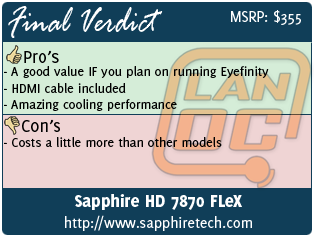 You might call him obsessed or just a hardcore geek. Wes's obsession with gaming hardware and gadgets isn't anything new, he could be found taking things apart even as a child. When not poking around in PC's he can be found playing League of Legends, Awesomenauts, or Civilization 5 or watching a wide variety of TV shows and Movies. A car guy at heart, the same things that draw him into tweaking cars apply when building good looking fast computers. If you are interested in writing for Wes here at LanOC you can reach out to him directly using our contact form.
Discuss this article
Log in to comment
Posts in discussion: Sapphire HD 7870 FleX Edition

We have 1058 guests and one member online