Earlier this year when AMD introduced the HD 7770 we took a look at cards from both Sapphire and XFX. Although we were impressed with the cards performance it was a little ill-timed due to AMD still clearing out discounted back stock. Three months later we are able to revisit the situation with today’s release of Sapphires new HD 7770 Vapor-X. With Sapphires Vapor chamber cooling technology along with a nice overclock over the reference design, the Sapphire HD 7770 Vapor-X could be a great option for a gamer on a limited budget. Let’s take a look.

Silver and dark blue line the Vapor-X’s packaging while still keeping Sapphires normal look. The last HD 7770 we saw from Sapphire had a girl in camouflage; this time around the same girl is in a white snow suit to represent the HD 7770 Vapor-X’s extra cooling. Along the bottom you have all of the required logos for Displayport, HDMI, PCI Express, ect. Around back all of the cards features are broken down with an short description around a paragraph long each. Sapphire also has a whole collection of the awards their cards have won. 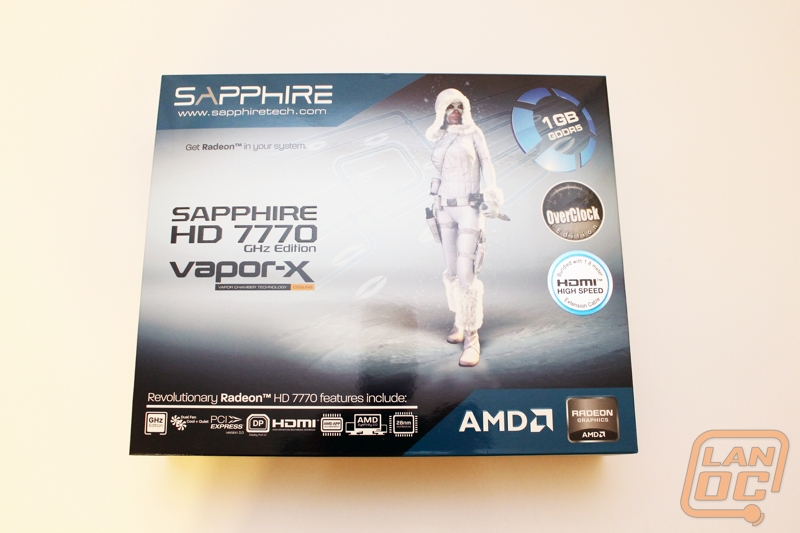 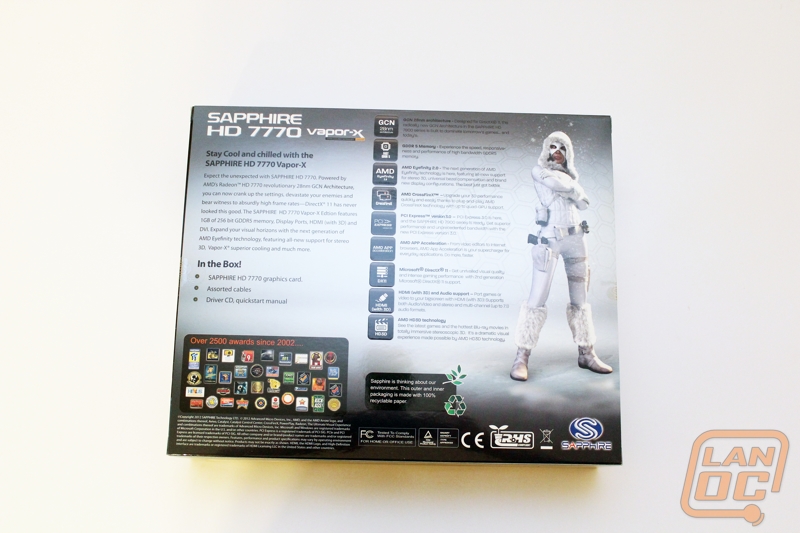 Inside there is a second box with all the goodies inside including the card itself. For accessories you get a DVI to VGA adapter, Molex to 6 pin adapter cable, and they even include a 1.8 meter long HDMI cable. The card is wrapped up in a padded anti-static bag for protection. Sapphire has also included a large stop sticker on the bag to remind you to hook up the cards power cable when installing the card. 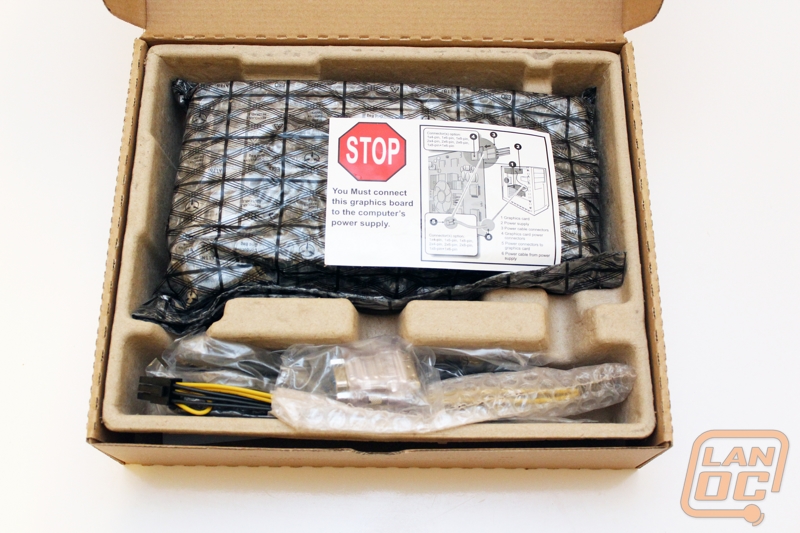 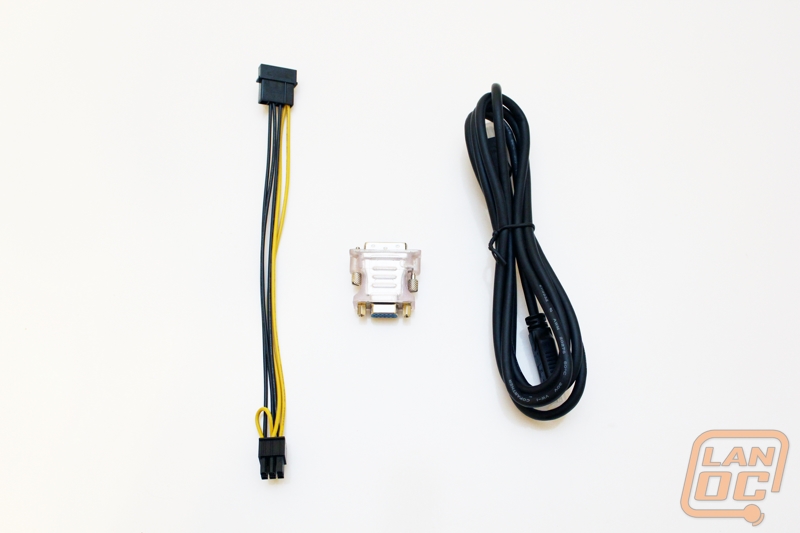 I know I have said it before, but I think Sapphire has outdone themselves once again with the fan shroud on this card. The combination of black and silver almost looks like a black lightning bolt across the side and the use of the smooth plastic piece on the top tops it off. The bottom half is a reflective sticker with the Sapphire HD 7770 on is as well as an AMD Radeon logo. Having the sapphire logo up top gives you a nice view when the card is in your case as well. 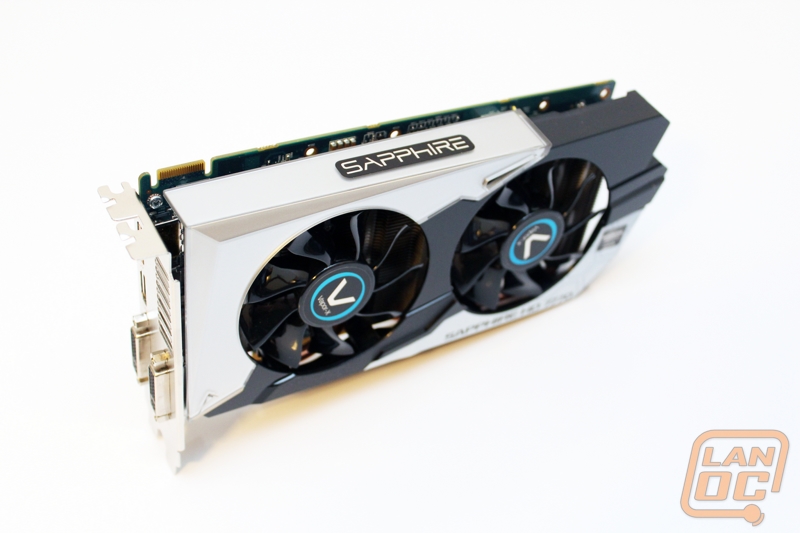 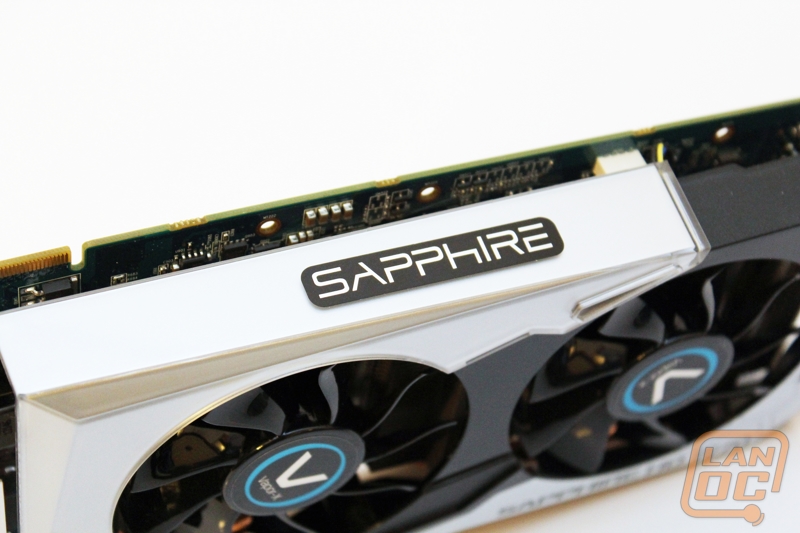 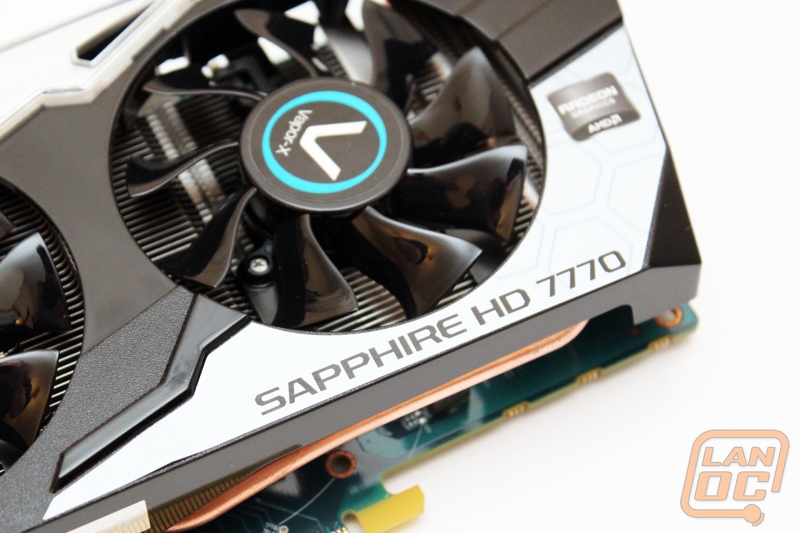 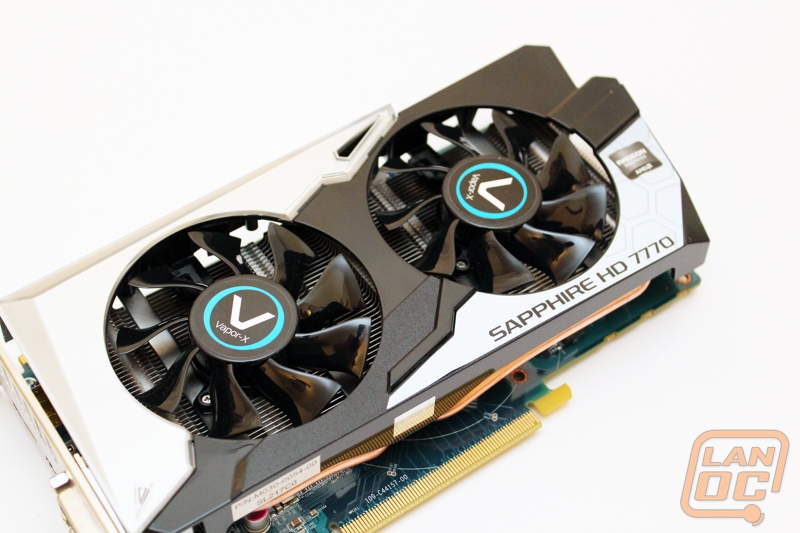 Just like the other HD 7770’s that we have had in the office the HD 7770 Vaper-X is sporting a 6 pin tucked in under the heatsink on the back. 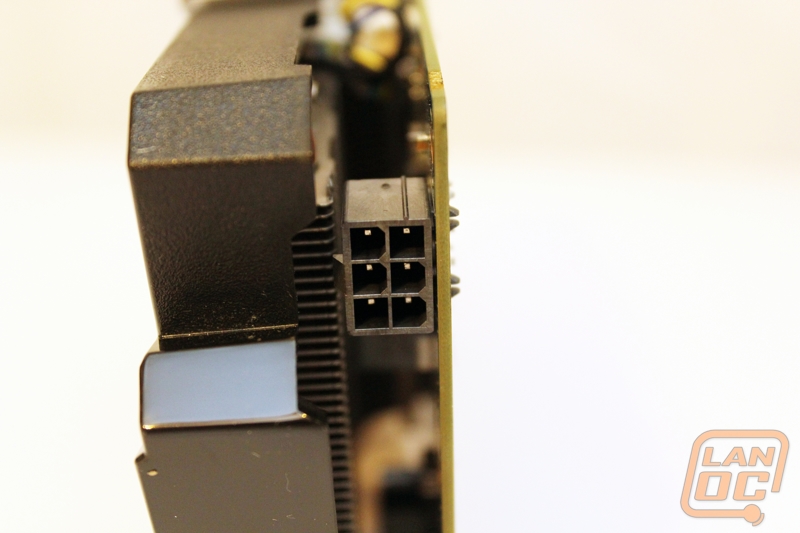 The last HD 7770 we saw from Sapphire was sporting one DVI port, one HDMI, and two mini Displayport’s. This time around we have two dual link DVI’s, one HDMI, and one full sized Displayport. This is a much better configuration than before. 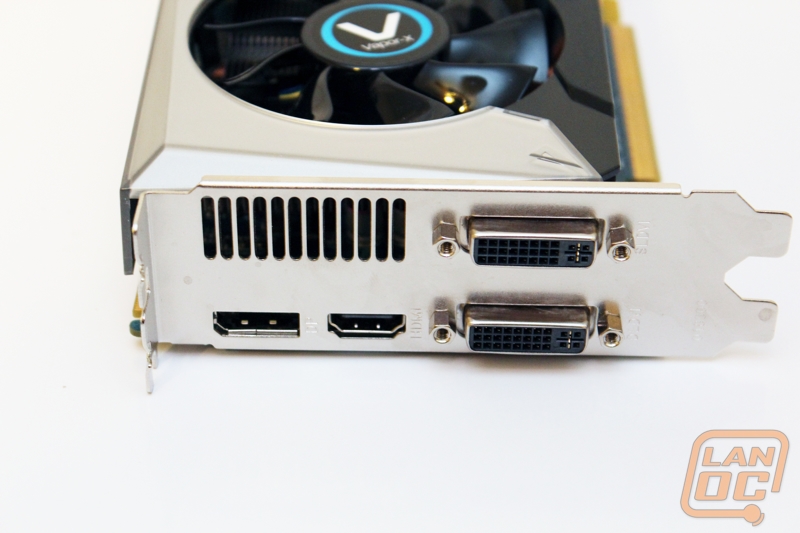 Although the card overall is really slick, a nice black PCB would have been the icing on the cake for this card. Sapphire went with a green/blue hue for the PCB. 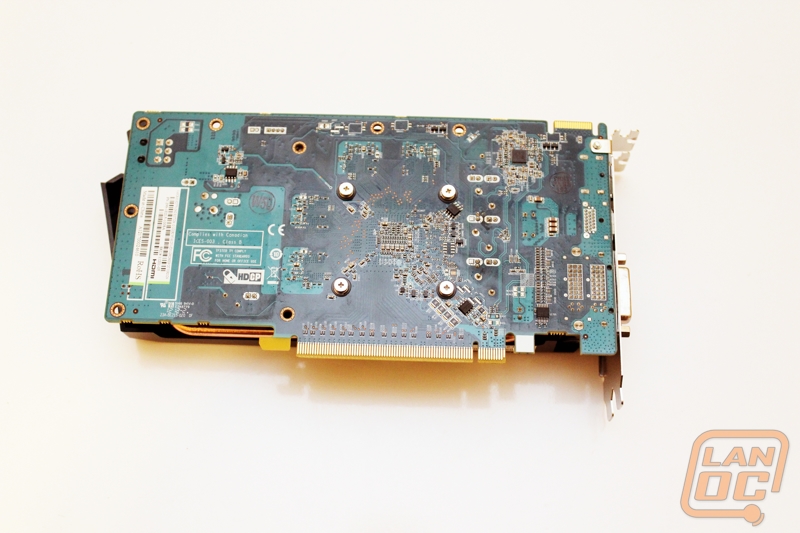 The biggest difference between the Sapphire HD 7770 Vapor-X and all of the other cards we have covered is the Vapor cooler, so I was very curious to see where this landed compared to the others both in cooling and noise levels. As always we went to FurMark for these results. FurMark puts such an unnatural load on all cards that you know that the results we see here are higher than anything it will do in game. Consider it a worse case scenario. 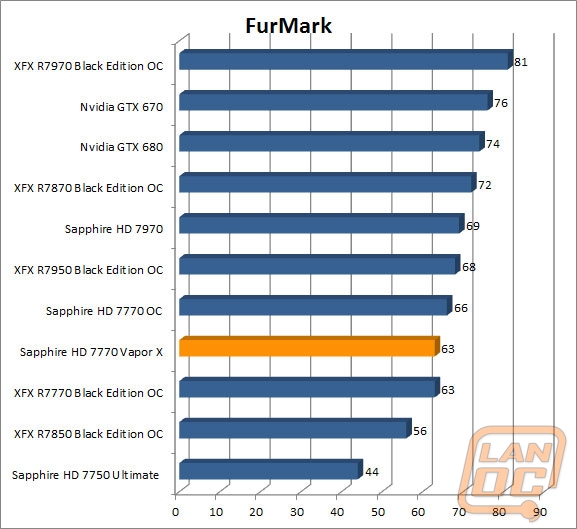 As you can see from the results the Vapor-X cooler helped Sapphire knock a few degrees off of their HD 7770 compared to the results we saw before. This actually put it right with the R7770 from XFX, this wasn’t a big surprise considering both cards had similar dual cooling fans.

Where the HD 7770 Vapor-X really stood out was in noise performance. While under load in FurMark I actually had to stop the fan on our test bench’s motherboard to be able to hear the card at all. Being on an open air test bench we normally hear more than what you would expect in a case, but in this case the HD 7770 Vapor-X was near silent. Sapphire managed to keep the card cool as well as silent.

Although it give you no idea what to expect for actual in game performance, there is still no better way to compare performance from card to card than 3DMark. In our case we run both 3DMark Vantage and 3DMark 11, on top of that each is run in performance then again on high/extreme. In all four cases our results for the Sapphire HD 7770 Vapor-X all fall in about the same. We saw numbers slightly below the R7770 from XFX and a little farther from the Overclocked HD 7770 saw looked at from Sapphire previously. What is the difference between those two cards and this one? The overclock. The Sapphire card had a 50MHz core speed difference than the Vapor-X, and the XFX although close, had a noticeably higher memory clock. I’m not sure why Sapphire went with a slightly lower overclock this time around considering the improved cooler, but the two cards give you a good idea what to expect with a slight overclock on this card.

We didn’t expect to see any surprises when testing this card in game and for the most part we didn’t. But due to a refined driver we saw big jumps over the other HD 7770’s in Crysis 2 DX9. The same goes for F1 2011 even though we don’t have any other results to compare to other then our GTX 670, but our results showed the HD 7770 coming in right with the GTX 670 in F1 2011, It’s unclear if this is the result of a large AMD bias or more likely ineffective drivers from Nvidia with the game. Beyond those two issues we saw the same pairing of the three HD 7770’s together on all of our other in game results.

I am still impressed as the results we saw from such a reasonably priced card. If you aren’t looking to play the most cutting edge games like Battlefield 3 you can expect the HD 7770 to play anything else on the market. You are actually getting performance in line with last year’s top of the line AMD cards. 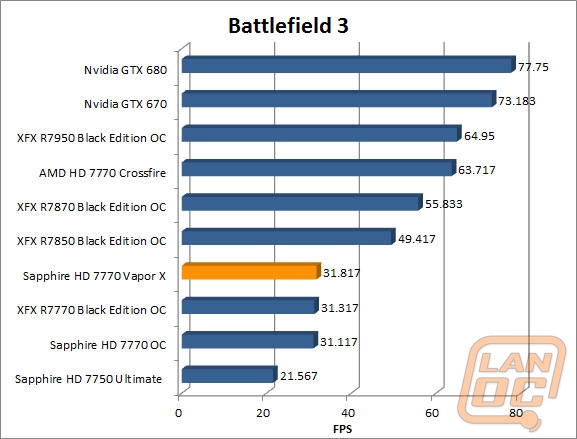 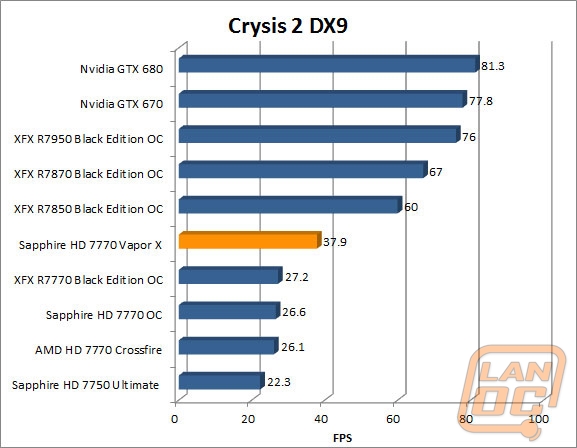 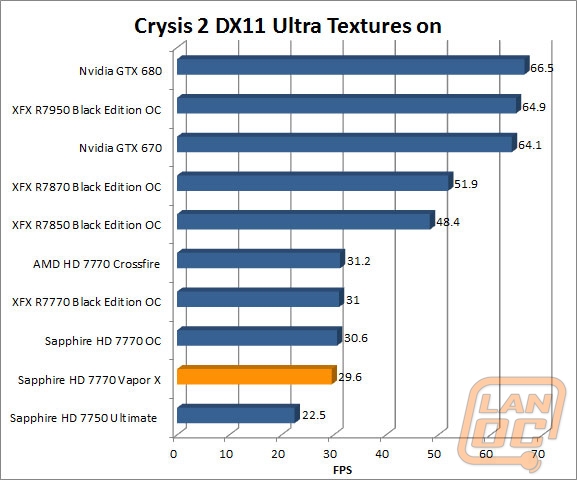 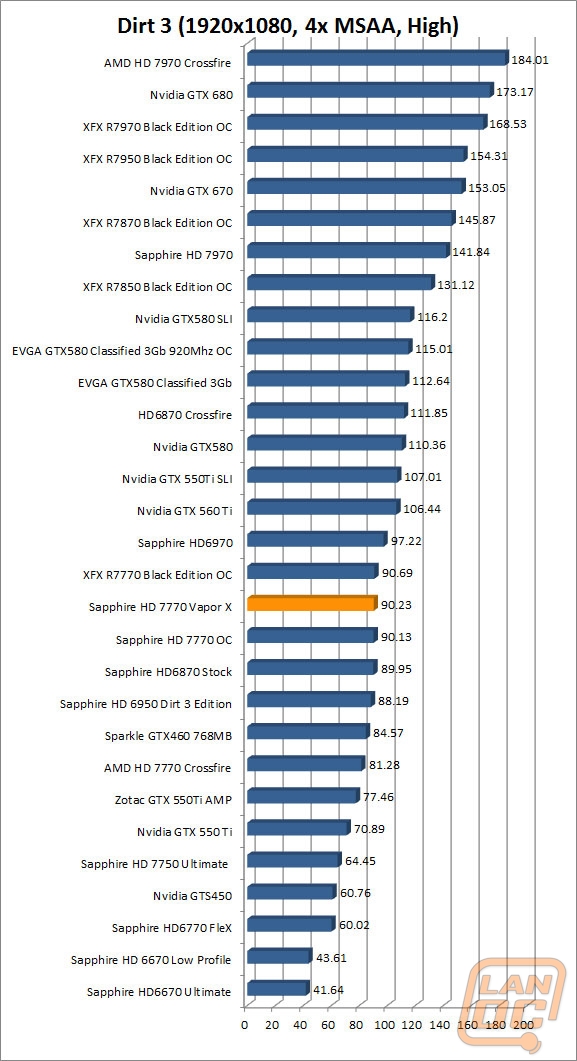 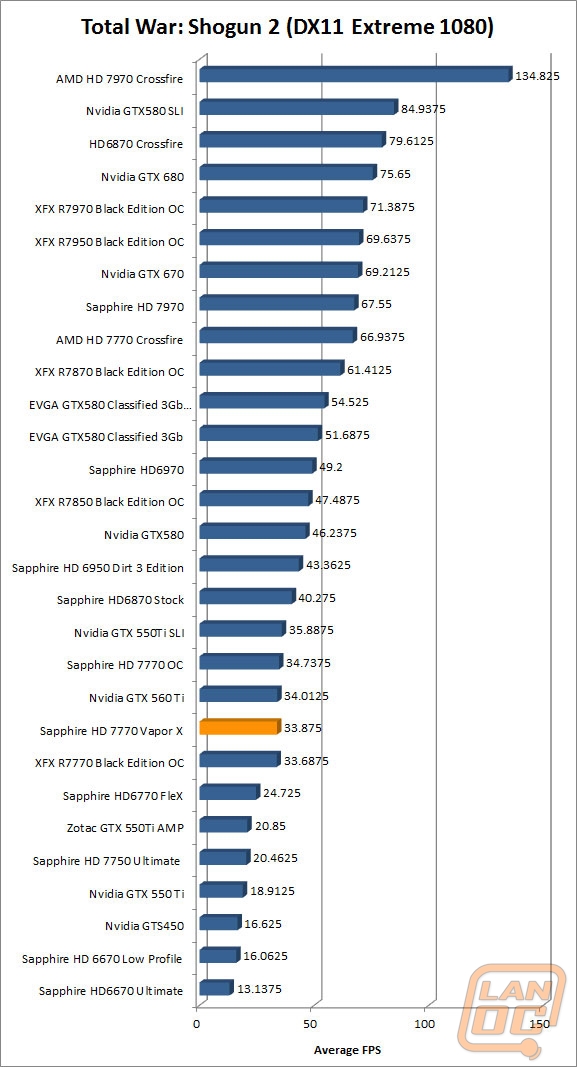 Sapphire went back to the drawing board after the launch of the HD 7770 and came back with the card we just took a look at, the HD 7770 Vapor-X. They managed to improve both the noise and cooling performance over their original design that we covered previously but we were a little surprised they didn’t go a little more extreme with the overclock considering the cards improved cooling. The upgraded cooling had the side benefit of near silent operation. This is also one of the best looking cards we have seen from Sapphire; the design is unique but still very simple.

On top of all of that this finally gave us the chance to stop and rethink our original recommendations with the HD 7770. Before it was priced in a way that it wasn’t competing with cards priced similar, even from AMD themselves. Today we can say that the price has dropped. But with Nvidia recently introducing new cards how will that affect things? A quick look at online retailers and we actually see Nvidia’s 550 Ti and the HD 6850 priced right along with the HD 7770. This is assuming the card sells for MSRP; any sort of discount would put it ahead of both in almost every case. Having said that jumping back to performances we saw the DH 7770 Vapor-X out performing both cards as well. Finally the HD 7770 has reached the price point it needed to be at launch. Until we start to see mid-range Kepler cards from Nvidia, AMD can finally take a breath with the HD7770 inching out ahead as the better buy right now. 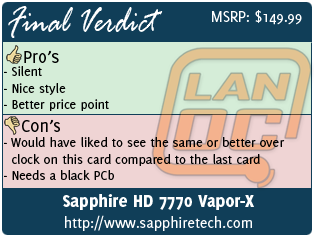 You might call him obsessed or just a hardcore geek. Wes's obsession with gaming hardware and gadgets isn't anything new, he could be found taking things apart even as a child. When not poking around in PC's he can be found playing League of Legends, Awesomenauts, or Civilization 5 or watching a wide variety of TV shows and Movies. A car guy at heart, the same things that draw him into tweaking cars apply when building good looking fast computers. If you are interested in writing for Wes here at LanOC you can reach out to him directly using our contact form.
Discuss this article
Log in to comment
Posts in discussion: Sapphire HD 7770 Vapor-X

We have 765 guests and one member online