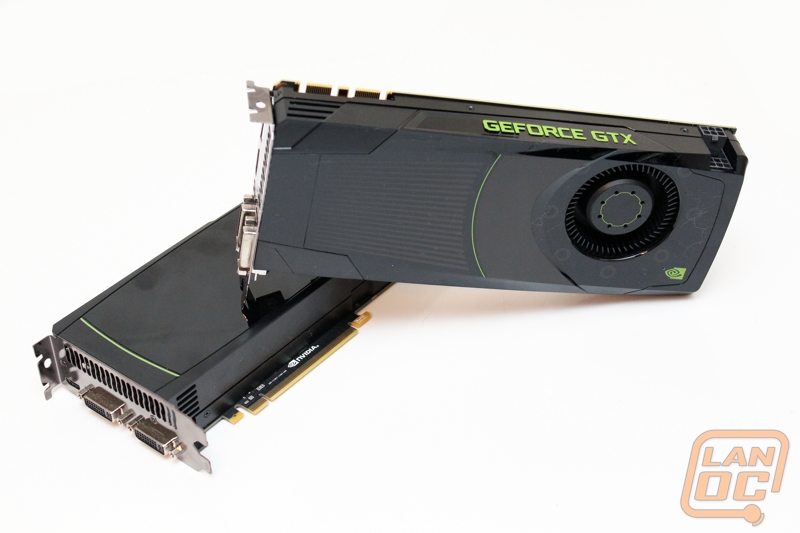 When NVidia invited me out to check out what they had been working on I was excited but unsure of what to expect. They had been very quiet about what to expect up until that point. After getting the full breakdown their and heading home to put the card to the test I have been very impressed with both the performance of the GTX 680 but also the work that NVidia put into both the card and the software and drivers behind it. Performance is one thing, but the dynamic boost that GPU Boost give you is unique and efficient in design and implementation. Adaptive VSync  and the improvements in surround show that NVidia is always trying to improve our gaming experience by listening to what everyone wants and what everyone hates about PC gaming. Being able to run 3+1 on one card is a big step in the right direction.

So I’m sure by now you’re wondering what it’s going to cost you to get a GTX 680 into your new PC right? What would you pay to get the fastest single GPU on the market? For the last few months the HD 7970 reference card has been selling for $549 and the GTX 680 out performs it considerably. I was very surprised when NVidia let us know that the GTX 680 will retail for $499. That is a price that even as lesser performance would/will force a major change in pricing for all video cards on the market. This is exciting because this will mean better performance for your dollar across the board. I expect to see a lot of people sporting GTX 680’s in SLI at that price, especially as they mature a little bit and we see even lower prices. 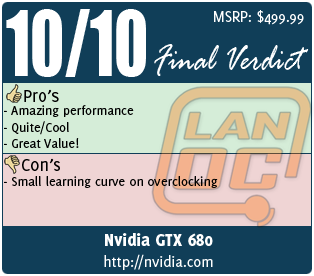 You might call him obsessed or just a hardcore geek. Wes's obsession with gaming hardware and gadgets isn't anything new, he could be found taking things apart even as a child. When not poking around in PC's he can be found playing League of Legends, Awesomenauts, or Civilization 5 or watching a wide variety of TV shows and Movies. A car guy at heart, the same things that draw him into tweaking cars apply when building good looking fast computers. If you are interested in writing for Wes here at LanOC you can reach out to him directly using our contact form.
Discuss this article
Log in to comment
Posts in discussion: Nvidia GTX 680 Kepler

You have all seen and heard the rumors for months now about Nvidia’s upcoming GPU code named Kepler. When we got the call that Nvidia was inviting editors out to San Francisco to show us what they have been working on we jumped at the chance to finally put the rumors to rest and see what they really had up their sleeve. Today we can finally tell you all the gory details and dig into the performance of Nvidia’s latest flagship video card. Will it be the fastest single GPU card in the world? We finally find out!

This WILL be my next video card. (And it makes it easier for me to pitch it to my wife with such a low price!)


Wingless92 wrote: I would wait for the 4gb cards. Might as well, double the frame buffer is always a good idea.

I don't argue with concept of double anything being bad, but the frame buffer is a bit misleading... Let's say you have a full 1080p eyefinity setup going (which obviously you won't have eyefinity with nVidia... but for discussion sake)... the resolution is 5760 x 1080 x 3 (24-bit color depth, you'll never have an alpha channel streamed) = ~17.8 MB. Most games, at best support triple-buffering, so ~54 MB. Your vertex shader inputs are going to cumulatively be more than that.

In general the only real thing you're effecting by increasing VRAM these days is how many texture maps you can fit in RAM. A ridiculous maximum texture size (8192 x 8192 x 4) still only amounts to ~333 MB of VRAM, even when mipmapped.

Just saying there's no practical reason (that I can determine) not to go ahead with one of these cards in case anyone else is on the fence.

Wingless92 replied the topic: #24116 22 Mar 2012 20:54
When I had my Surround setup I know if I would have had another 3gb EVGA Classified card I would have seen better FPS with the bigger frame buffer. The game would run better with the more that it can load into the buffer. Also, now that i'm on a 30in 2560x1600 panel its still pushing the GPU's really hard. Once the 580's come down I'm going to do a third.

With everything cranked to the max in Alan Wake I am seeing right around 60FPS.

Sure, if you are on a 1080p monitor, then this is overkill. Save the cash and buy something less powerful. These cards are meant for multiple displays or 30in panels. Other than Battlefield 3 no one is playing intensive games. Most people play LoL, TF2 and DOTA2. You don't need a 680 to run these games. A 560Ti would be fine. If I had a lower end card I would be looking for the new 660Ti whenever that comes out.

Wingless92 wrote: When I had my Surround setup I know if I would have had another 3gb EVGA Classified card I would have seen better FPS with the bigger frame buffer. The game would run better with the more that it can load into the buffer. Also, now that i'm on a 30in 2560x1600 panel its still pushing the GPU's really hard. Once the 580's come down I'm going to do a third.

Hrm... you'd need to clarify that all up for me before I'd give a real serious reply but just quickly and to keep it all in context of what I was sayin' earlier, a frame buffer has zero to do with frame rate on today's graphics cards due to its negligible size - it's a small drop in a huge bucket. The (primary) frame buffer is a static reserved area in VRAM based upon the currently selected monitor resolution and color depth. The GPU streams the frame buffer to the monitor (or monitors) once per VSYNC strobe, regardless of whether you have VSYNC delay turned on in your game. So frame buffer really doesn't effect frame rate.

You mentioned "had another 3gb ... card", what I'm not sure of here is whether you mean two SLI'd cards. Of course that's going to process faster but everyone knows that so not sure what you were getting at there :-D .


jj_Sky5000 wrote: The price is the most shocking & they have left the door open as well, with teh lower power consumption!!!! I think i will be adding Keplers to my collection!!!

Anyone else look over on Newegg and see that PNY was trolling and asking $20 more for their cards? I'll take EVGA until they go downhill which I hope will be never.

Wingless92 wrote: Anyone else look over on Newegg and see that PNY was trolling and asking $20 more for their cards? I'll take EVGA until they go downhill which I hope will be never.

It's actually $30 (right now) ... but yeah I am angling towards picking up an EVGA. Several NewEgg gift cards ready to be used up

"AMD is expected to release its flagship dual-GPU graphics card based on the "Tahiti" platform in 2012. We are learning under the codename "New Zealand", AMD is working on the monster HD 7990, which will utilize two HD 7970's and 6GB of total graphics memory (3 GB per GPU system). If AMD will indeed go for the HD 7970, this could mean that the card will include 62 compute units for a total of 4096 stream processors, 256 texture units and 64 full color ROPs."

garfi3ld replied the topic: #24159 23 Mar 2012 10:32
Arxon you have to remember two things. A two GPU card isn't "topping" Nvidia, they can do the same thing. Second, not being "much" better is still a large gap considering the price difference right at launch.

This isn't coming from someone with any bias, I gave two awards to AMD cards this week even.

garfi3ld replied the topic: #24160 23 Mar 2012 10:37
Also I think the Nvidia drivers, although much more mature and stable than what AMD launched with, still have a lot of room for improvement with ingame performance. 3DMark shows that the card is capable of. I wouldn't be shocked if we saw major improvements in some games by the time we get around to cards like the GTX 670 or 660.

Arxon replied the topic: #24161 23 Mar 2012 10:56
I didn't realize the 7990 had to gpus when i made the first comment then i read about it. As for price from what I see $50 cheaper but the ATI has more stream processors faster ram but a 8ghz slower core on stock models. Not much of a gain for 50 but i wouldn't have to buy a second one for triple monitors. Unless Nvidia changed that.(just watched that video and at the end they did change it to where you only need one card.)

We will have to revisit everyone once the dust settles

THUMPer replied the topic: #24173 23 Mar 2012 18:14
Wheres the GPU Compute performance? After all, Nvidia created the GPGPU market and CUDA programming environment. NV can tweak their drivers for games and benchmarks, that's obvious, but they shat where they sleep.
AMD needs to bring their prices down or they won't sell anything. I would like to see more info on the gpu boost.

THUMPer wrote: Wheres the GPU Compute performance? After all, Nvidia created the GPGPU market and CUDA programming environment. NV can tweak their drivers for games and benchmarks, that's obvious, but they shat where they sleep.
AMD needs to bring their prices down or they won't sell anything. I would like to see more info on the gpu boost.

According to the live stream over at pcper yesterday.... the nvidia rep said that the compute performance is going to be more focused on the Quattro line as a way to differentiate the two lines of cards. Its sad.

We have 1844 guests and one member online