Haven already taken a look at a few HD 7770 cards and even in Crossfire I had a good idea of what to expect when we got our first HD 7750 in. Little did I know Sapphire would throw us for a curve and send their new HD 7750 Ultimate Edition. A few long time readers may remember that we have covered Ultimate Edition cards in the past and they have always ended up being good performing cards that are dead silent and almost always very cool looking cards also with their specially designed full cover heatsinks. Let’s take a look to see what Sapphire did this time with their mid-range performance card with silent performance.

The packaging for the HD 7750 Ultimate looks like a normal Sapphire card at first glance. But you may double take when you realize that the character on the front isn’t like their other cards, this time we have a ninja, for good reason. Along with the Ninja on the front you also have a large Ultimate logo that is much larger than the Sapphire HD 7750 above it. 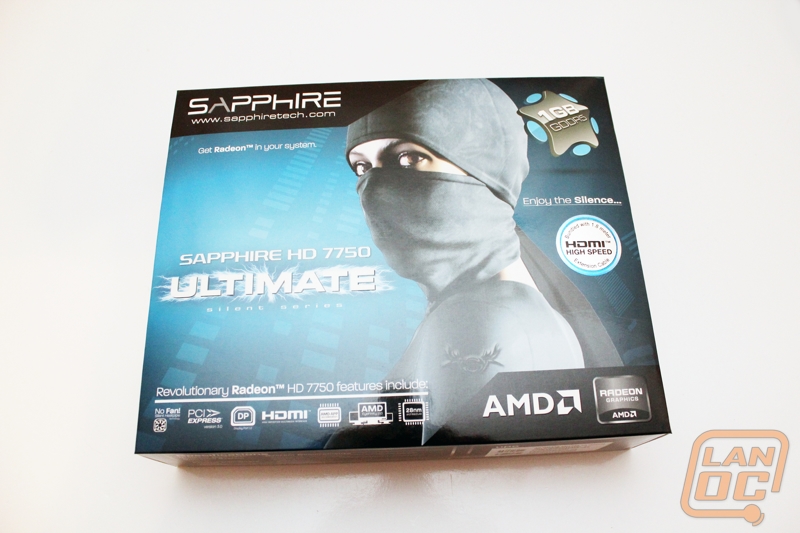 Around back you have a full feature breakdown taking up over half of the back. Besides the breakdown you also have a collection of award logos that Sapphire cards have received, rumor has it we may see a LanOC Award there in the future. 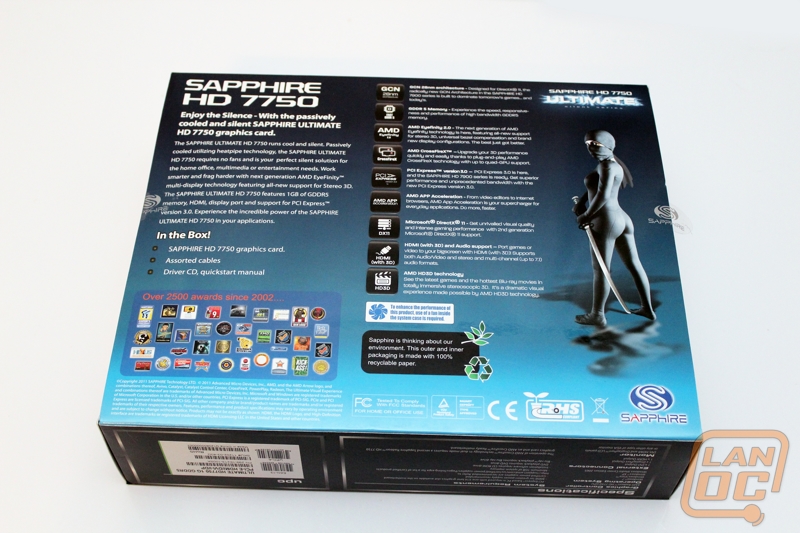 Inside the packaging is a cardboard box. Inside you have a cutout for the card with all of the included papers and driver disc tucked away on top. There is a small cardboard box on top that houses the included HDMI cable. The card itself is wrapped in a static protectant bag then tucked into the protective foam to keep it safe. 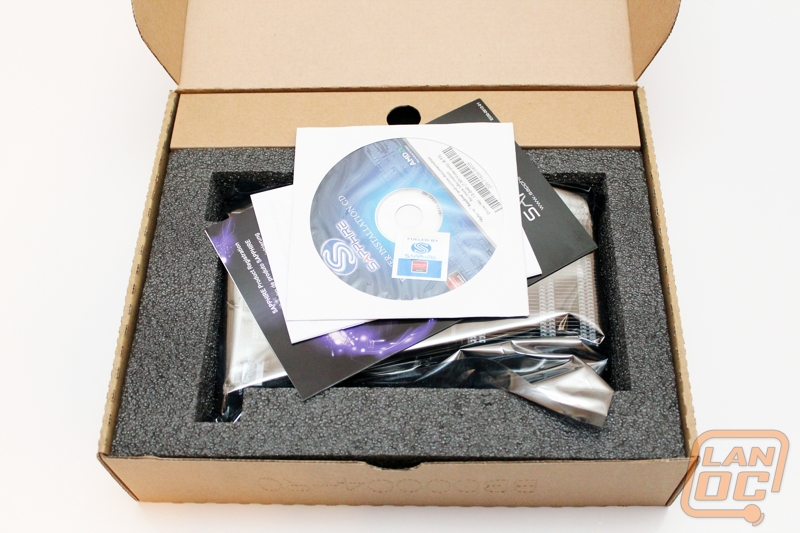 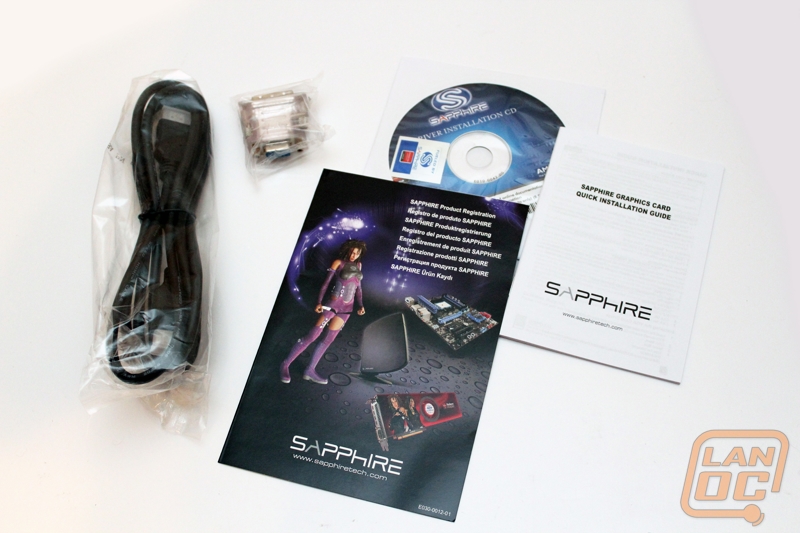 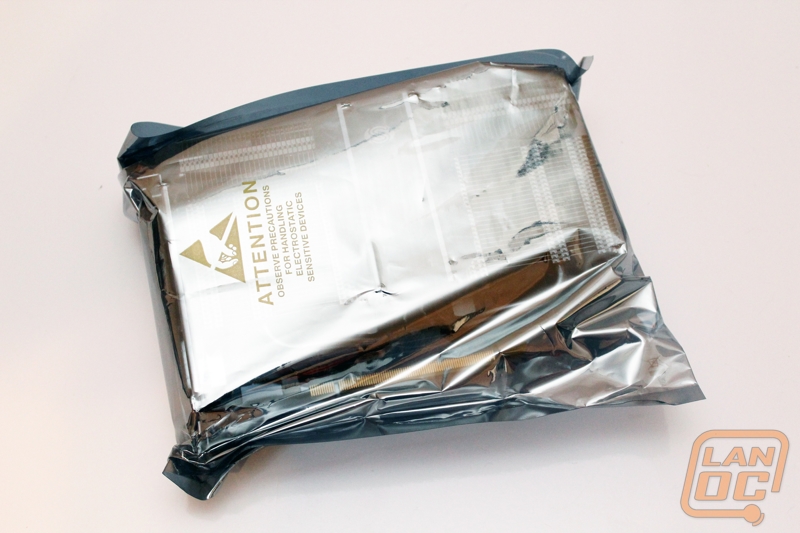 Warning, hot surface! Sapphire made sure to include a nice warning right on the top of the heatsink, without a fan this card is bound to end up hotter than most other cards after a hard core gaming session.  With the heatsink wrapping around the top of the card touching it is a little more likely than other cards. But let’s be honest the main reason they had to put this sticker on is because everyone is going to want to touch this sexy card, it looks great! 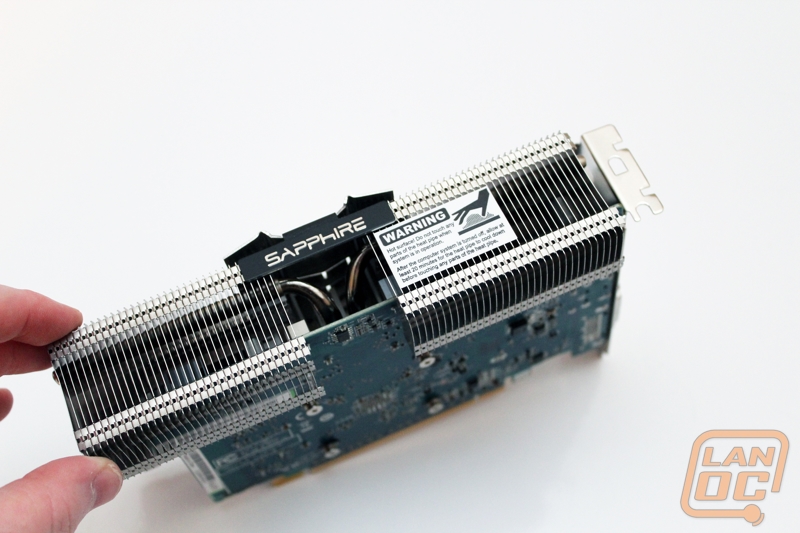 I still hate seeing that blue PCB when black PCB’s are all the rage right now but this photo also gives you a good look at how small the HD 7750’s PCB is compared to the heatsink. You can see it overhanging over the back of the card along with how it loops over on the top. Because of that you won’t be able to pack another card right up against the HD 7750 Ultimate, not that you would want to. 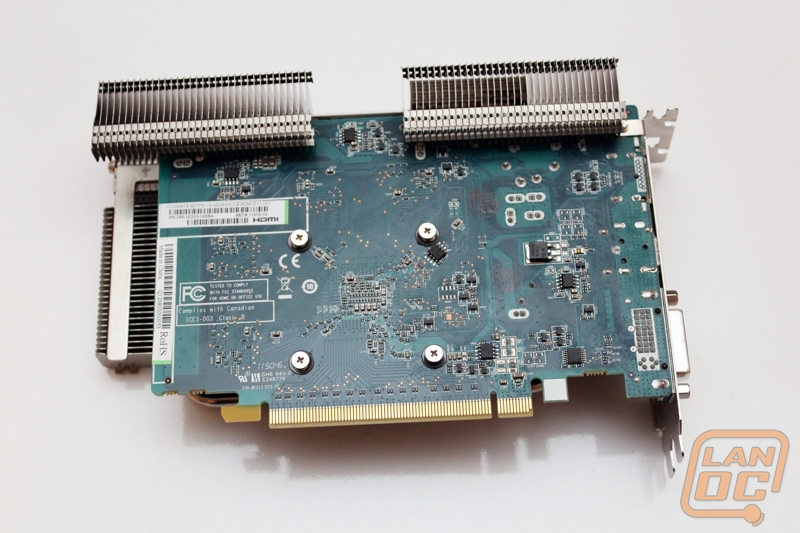 The front of the card, in-between the heatsinks and above where the card bolts to the GPU itself Sapphire has included a black plate with the sapphire logo on it. This plate looks a lot like an engine cover . From this point of view you can see two of the heatpipes that pull heat out to the outside “wings” of the heatsink to help keep things cool. 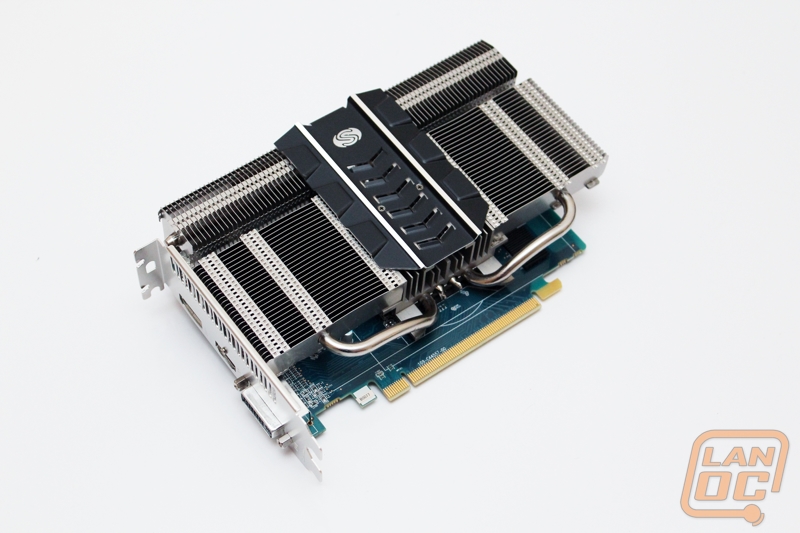 The rear PCI slot has a variety of connections including DVI, HDMI, and a full sized DisplayPort. You also have a full length vent, but considering this card does not have a built in fan I don’t think that vent will be blowing out any air. I would have rather seen a second DVI connection be included in this case. 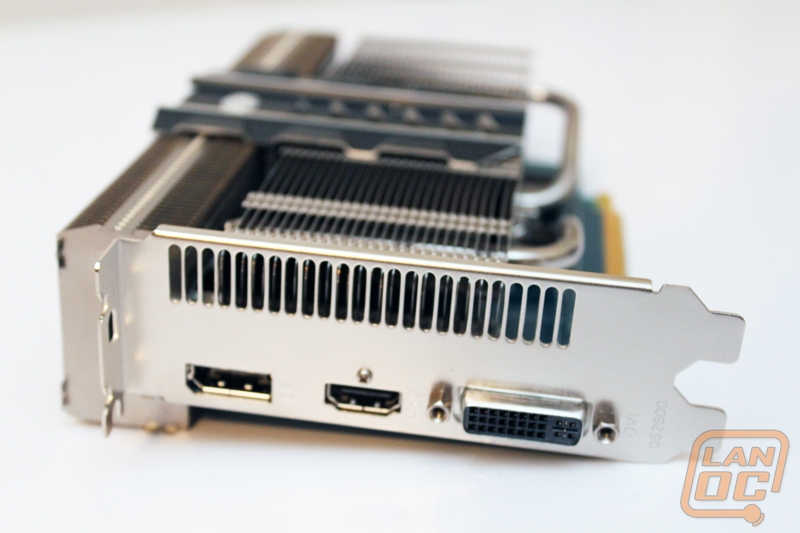 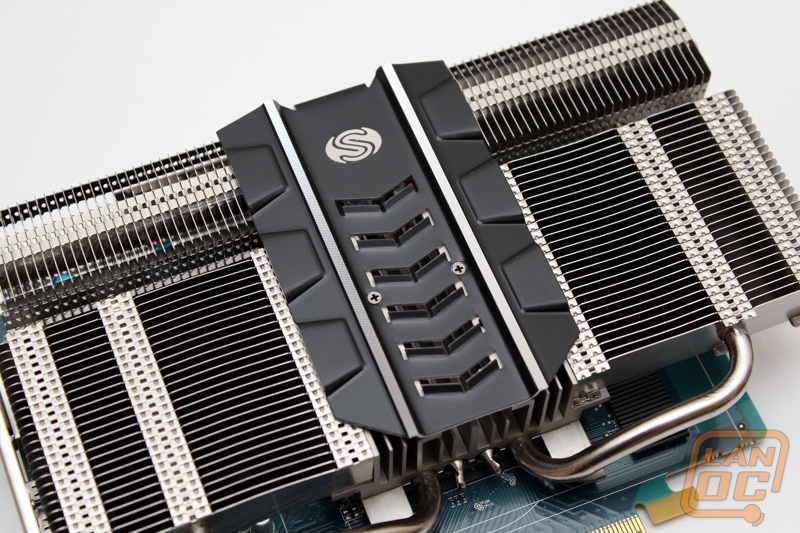 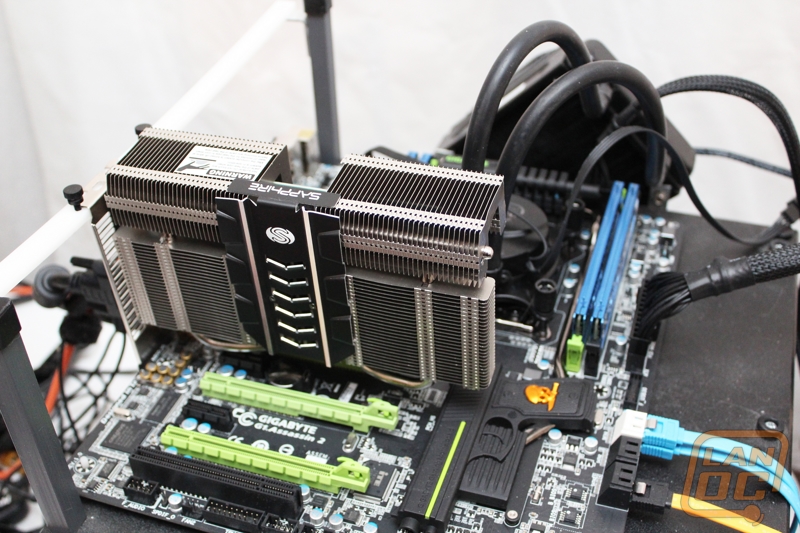 While doing cooling and noise testing in Furmark, you would expect for a little give and take considering the HD 7750’s lack of a fan at all. Obviously this card is dead silent, but it’s going to run a little hotter right? As it turns out, no! In fact my cooling results after running through the 1080p benchmark on Furmark show the HD 7750 Ultimate at a very low 44 degree’s. Doing our testing on our test bench means we don’t get the same heat buildup that other cases would have, I would expect this number to be higher in some cases. But it does go to show you that if you have good cooling in your case you won’t have any problems at all keeping this card cool, much cooler than the overclocked HD 7770’s we have tested in the past. 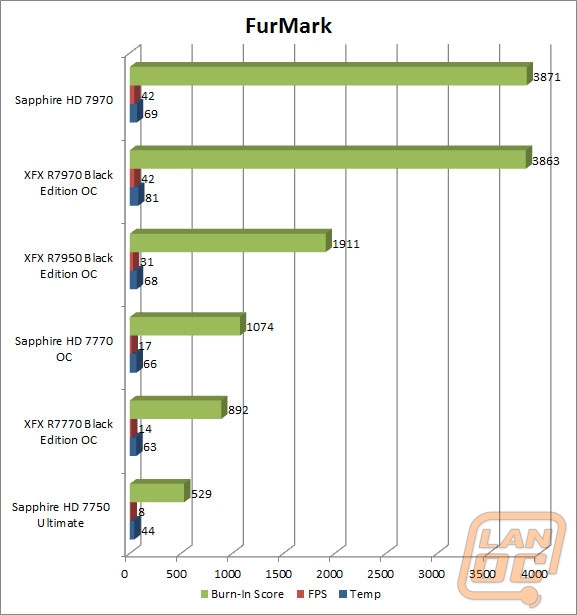 Where does the HD 7750 fall as fare as performance is concerned? Our Futuremark 3DMark Vantage and 3DMark 11 benchmarks are the best way to see how the cards fall. Our HD 7770’s came in around the HD 6870 but the HD 7750 comes in much lower showing us performance similar to the HD 6770 and the HD 5770. How does it compare to Nvidia’s offerings? Performance is just in between the 550 Ti and an overclocked 550 Ti in most cases. 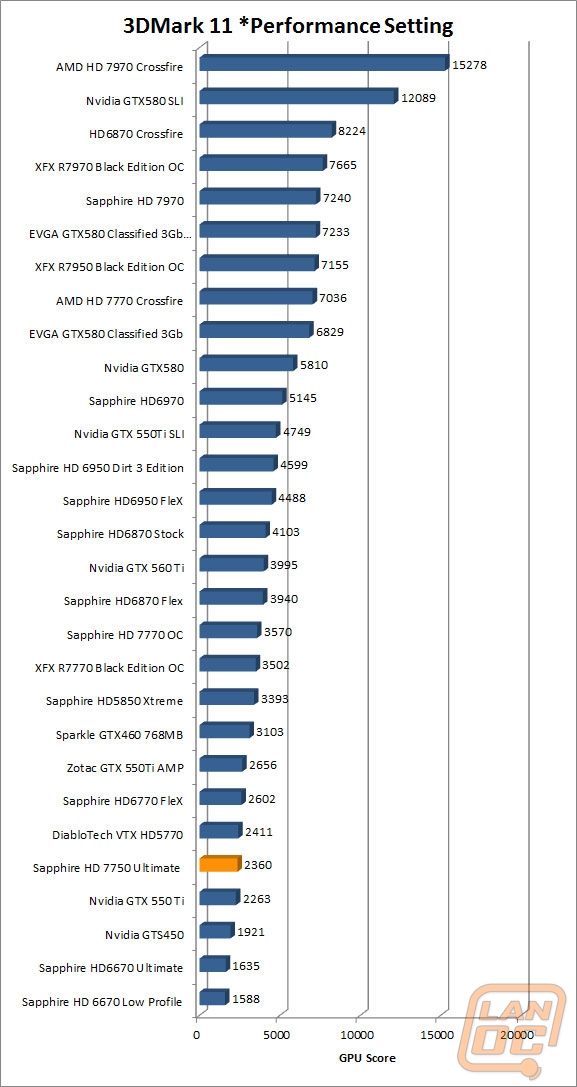 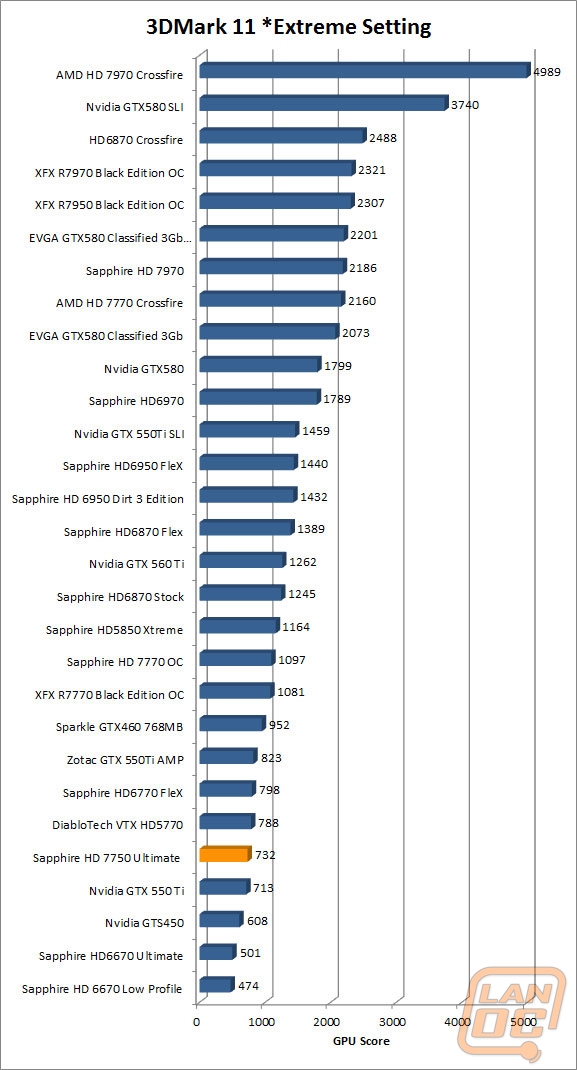 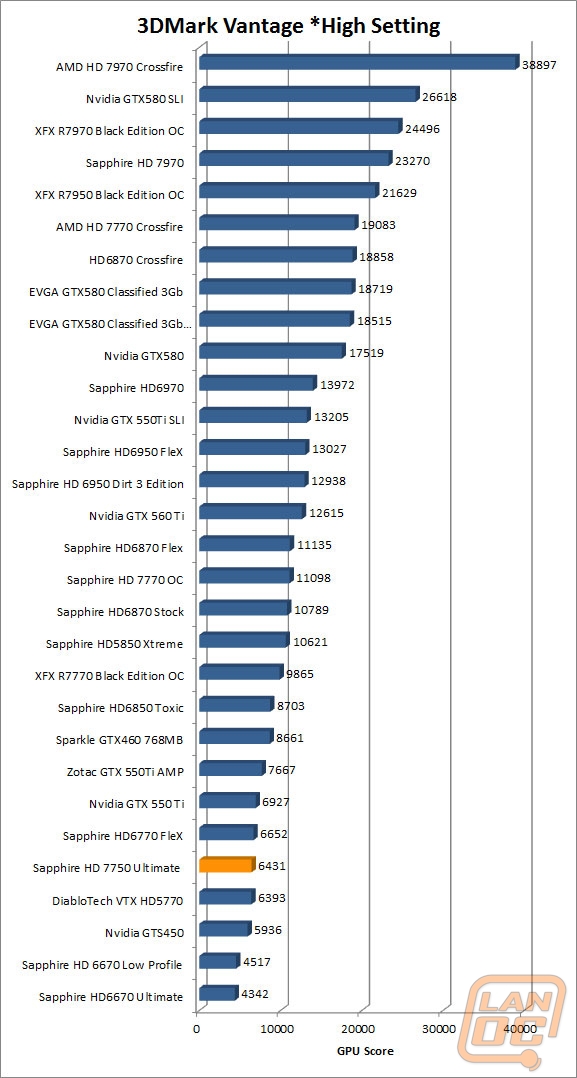 Most of our In Game benchmarks are designed to push the limits of ALL video cards including high end multi card configurations. Because of that it’s not really surprising that the HD 7750 only gave us playable frame rates in Battlefield Bad Company 2. Most of our other tests include cranked up AA, something this card can’t handle. The Battlefield Bad Company 2 results do show you that you shouldn’t have any trouble playing any game with the HD 7750 as long as you’re willing to turn the settings down slightly. That means no AA/multisampling and in extremely demanding games avoiding ultra or high texture settings. 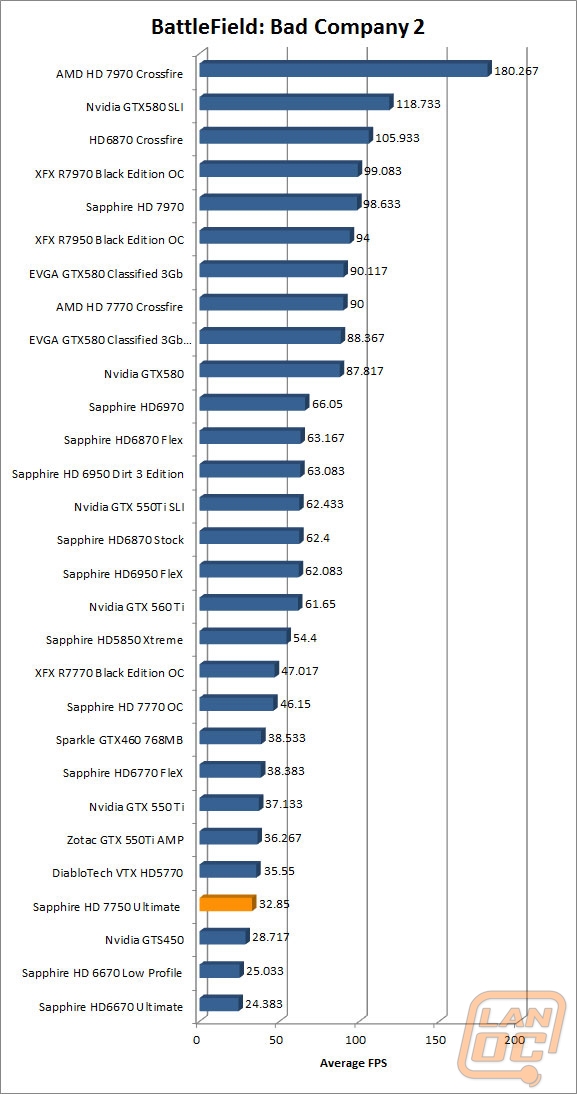 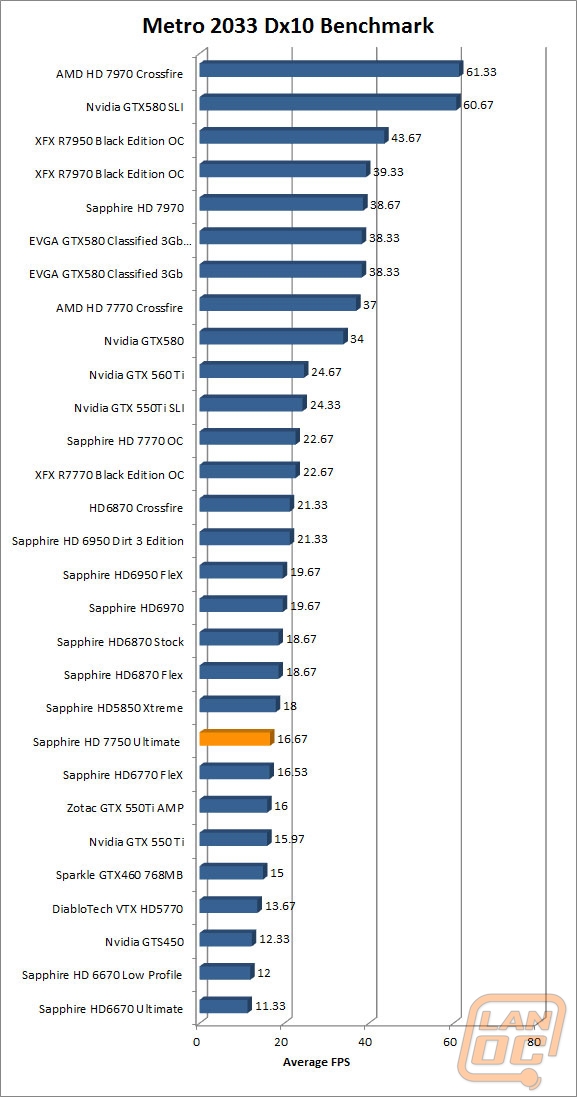 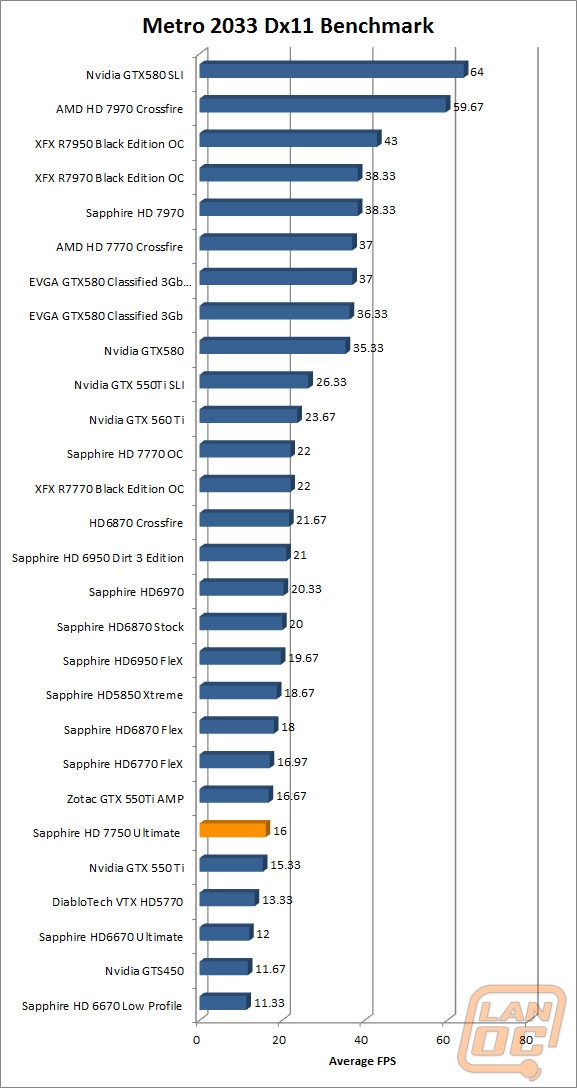 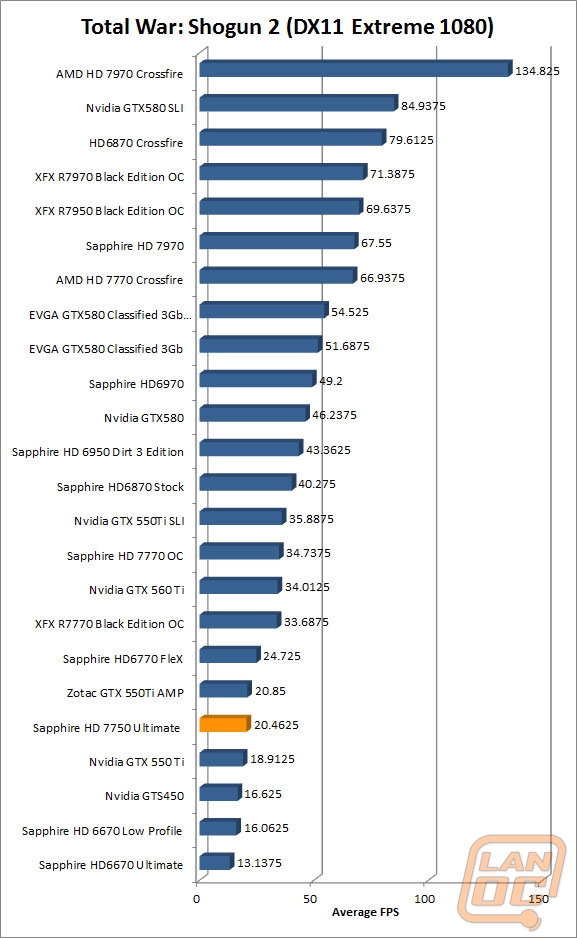 Every time we get one of Sapphires Ultimate Edition cards in I am always blown away at their cooling power considering their noise output(silent). The HD 7750 Ultimate is no different; in fact its cooling performance was so good that I really wish they would have done this with a slightly warmer card like the HD 7770 so we could see even better performance. Speaking of performance the HD 7750 isn’t anything to write home about, giving you performance similar to the HD 5770, a card that has been around for a very long time. But having said that, there is no way that two years ago that the HD 5770 could have been turned into a Silent card due to its heat output. That shows you the improvements in AMD’s thermal output along with improvements in Sapphires heatsink design. This card is not for everyone, but if you are looking to avoid the typical noise from GPU’s, this is the best performing option on the market right now. 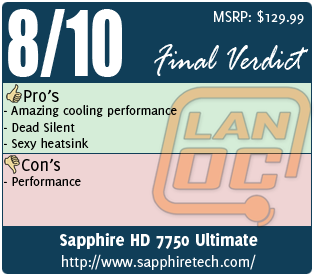 You might call him obsessed or just a hardcore geek. Wes's obsession with gaming hardware and gadgets isn't anything new, he could be found taking things apart even as a child. When not poking around in PC's he can be found playing League of Legends, Awesomenauts, or Civilization 5 or watching a wide variety of TV shows and Movies. A car guy at heart, the same things that draw him into tweaking cars apply when building good looking fast computers. If you are interested in writing for Wes here at LanOC you can reach out to him directly using our contact form.
Discuss this article
Log in to comment
Posts in discussion: Sapphire HD 7750 Ultimate