The graphics card industry has undergone more than a few changes in the first half of 2011, including a branding shift within AMD itself. At the end of April, the manufacturer announced plans to introduce an updated version of their popular HD 5770 and HD5750. That upgrade has us today taking a look at the HD6770. In this case we will be taking a look at Sapphires FleX version of the card. Some of you may remember that we took a look at the HD5770 FleX last August, along with just about every other FleX model in between. The HD5770 FleX was given our Editors Choice; will its replacement do the same? In order to do that the HD6770 will still have to maintain a great price to performance ratio, something that may be hard to do with all of the great competition.


Packaging
If you're one hoping that the HD 6770 is similar to the 5770, Sapphire's packing will give you high hopes. The box for the 6770 FleX edition is almost identical to that of the 5770 FleX, give or take a few badges and orientation. Among a few buttons proclaiming the main features of the card, a reference box explains to consumers exactly what makes the fleX edition special. We, however, will make you wait until the Performance section of the review. 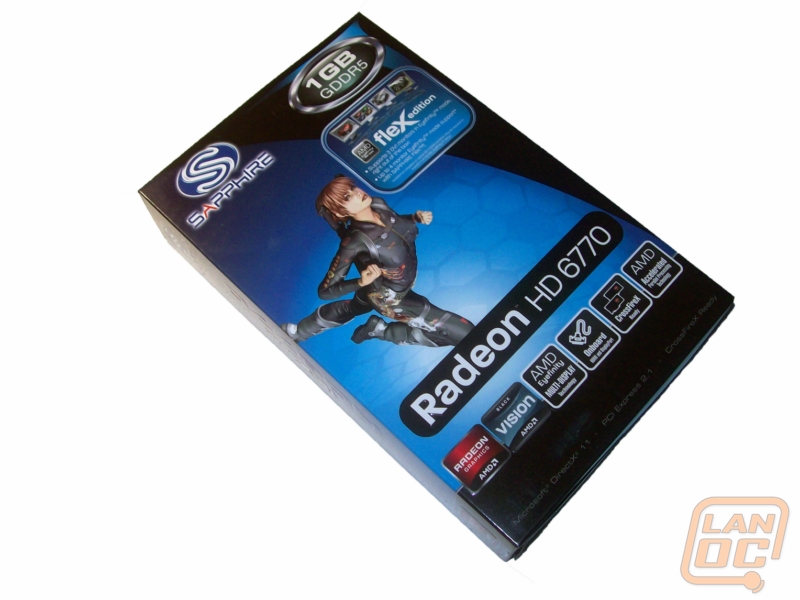 On the reverse side are further details about the card and features, as well as a list of included accessories. At the bottom, consumers can see an impressive collection of awards the company has earned throughout the years, though I can't help but feel it's missing a pretty big one... 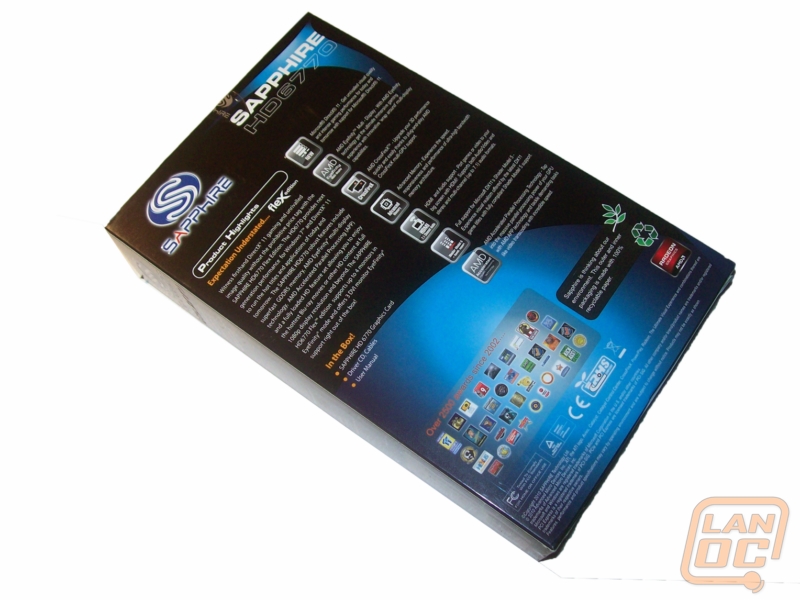 The containing box slides out of the art sleeve, revealing the driver software and paperwork resting on top of a static-protectant bubble-wrap bag. Removing the cushioned card will allow the DVI-to-HDMI cable, DVI-to-VGA adapter, and 6-pin Molex connector to once again see the light of day. 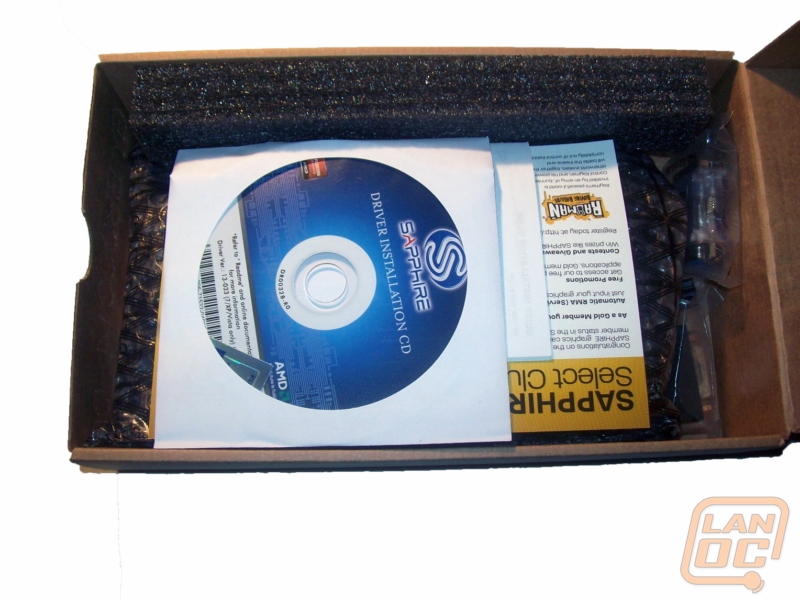 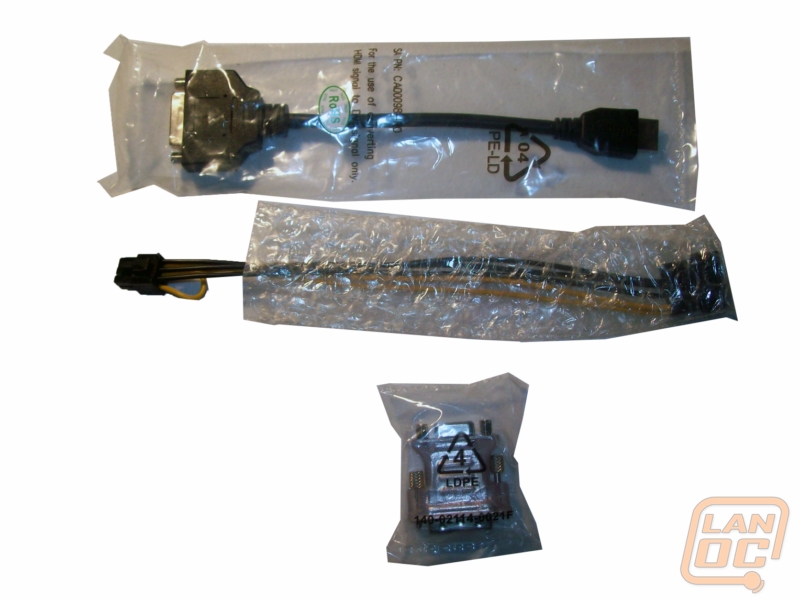 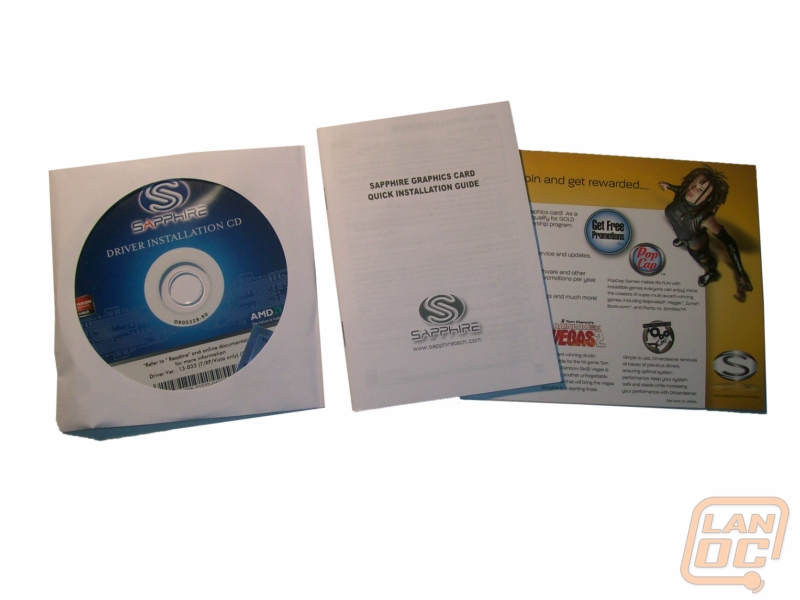 Board Layout
Cooling is addressed with Sapphire's typical combination of heatsink and central fan encased in a plastic shroud to channel the hot air through a half-vent on the double-PCI slot. Although similar in design to what we typically see in a reference card, this heatsink is of Sapphires design and different than the HD6770's reference cooler. 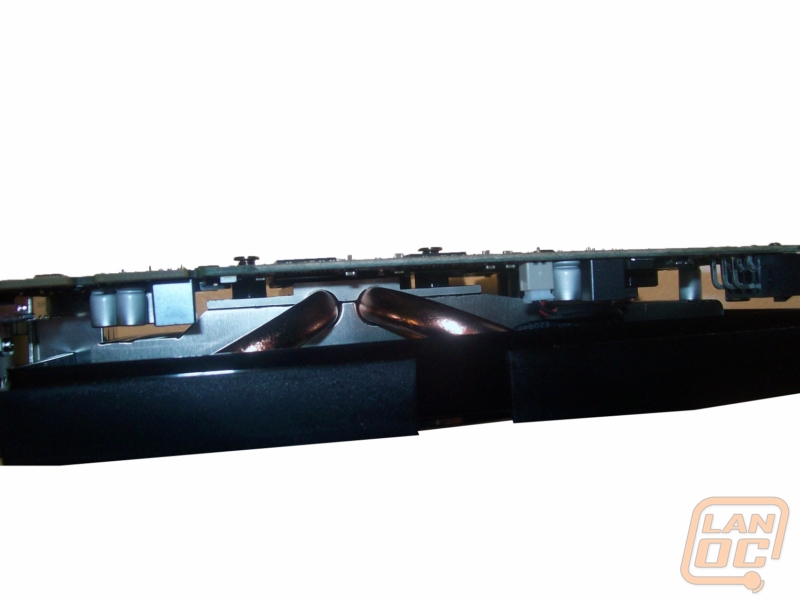 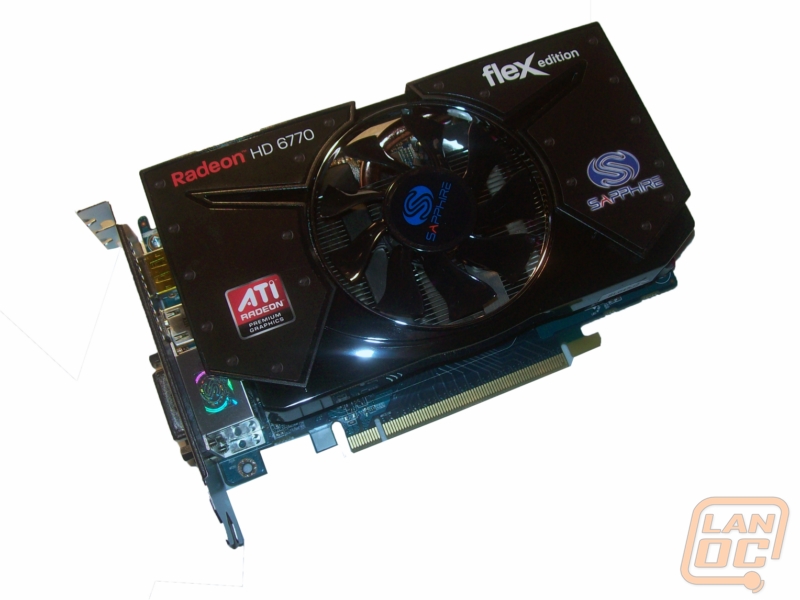 Under this vent you will find a black single-link DVI port, neighboring a white dual-link DVI port, which simply provides more bandwidth if needed. Above the DVI ports are a full HDMI port, and a DisplayPort. Again, this PCI layout is identical to that of the Sapphire HD 5770 FleX. 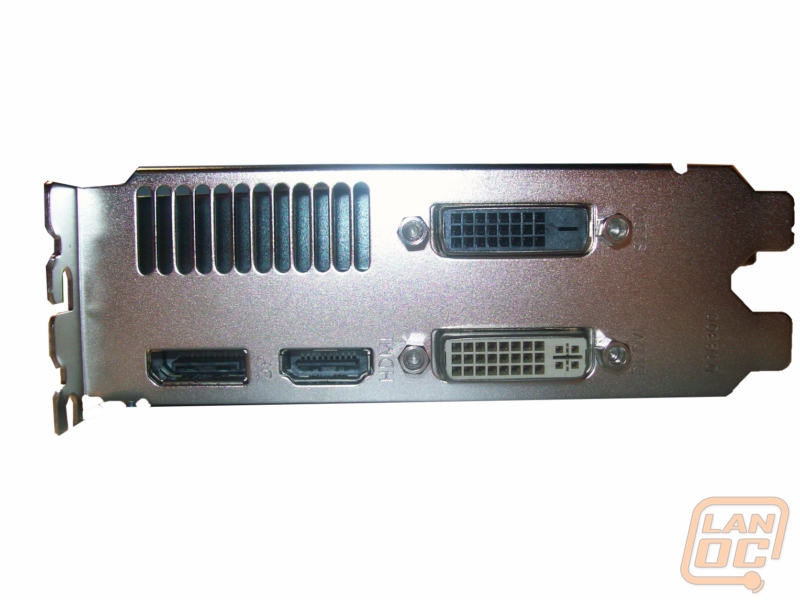 The HD 6770 is powered by a single 6-pin, position at the top right corner between the PCB and the shroud. Sapphire has ensured compatibility with PSU's by including a molex power adapter, just in case your unit is out or without the pins needed. 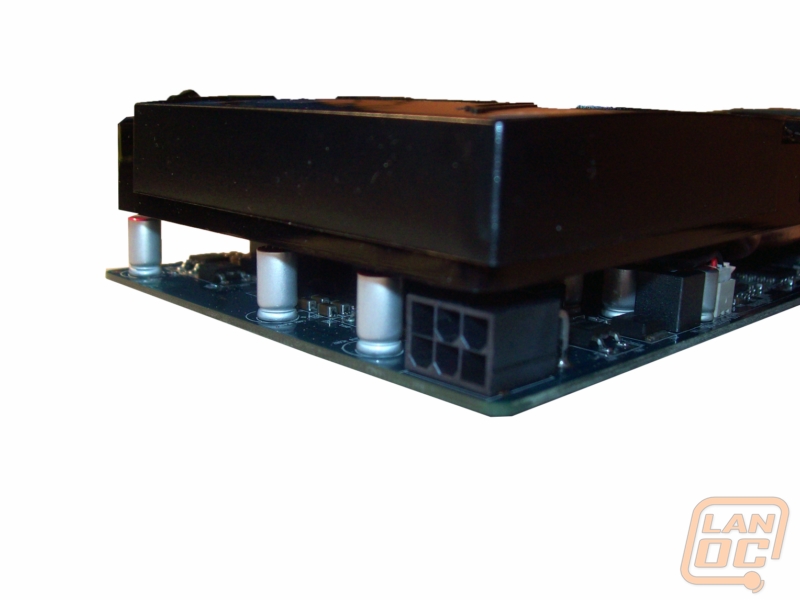 The back of the board is a clean blue PCB which allows us a little better view at the connections to both the motherboard PCI-e and CrossFire bridge, which is placed in the typical left-hand corner of the card. 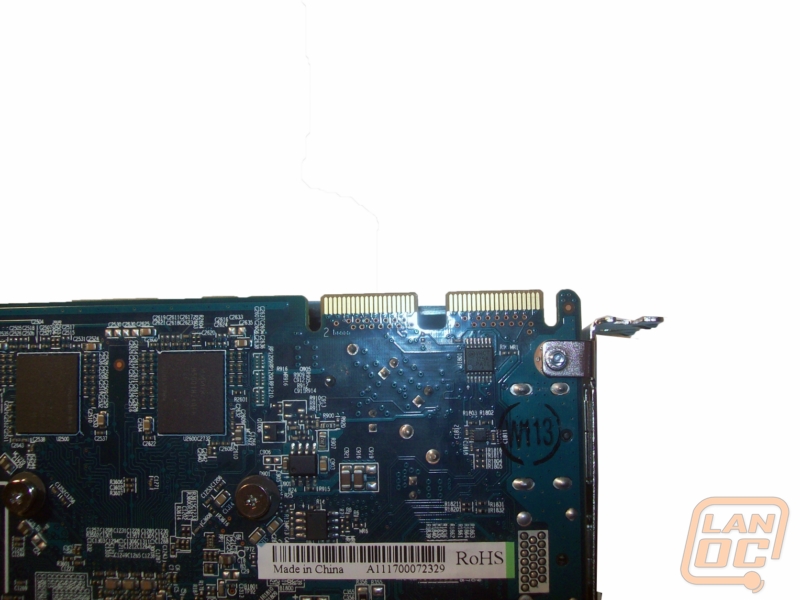 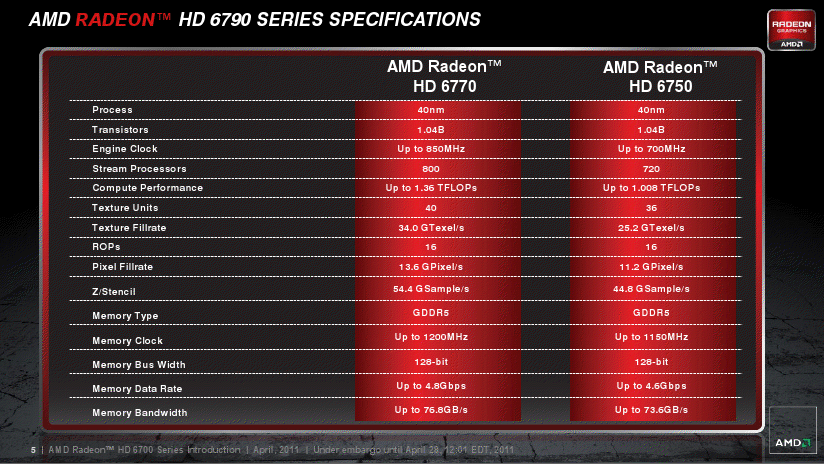 So, what's with the repackaging? One of the main reasons is the discontinuing of the ATI brand. The Northern Islands GPU family marked the official end of the ATI brand, with the 5770/5750 still competitive but missing the new graphic logo of AMD graphics. The HD 6770 can now be issued with the correct AMD logo, though ironically our test sample still features an ATI Premium Graphics badge. 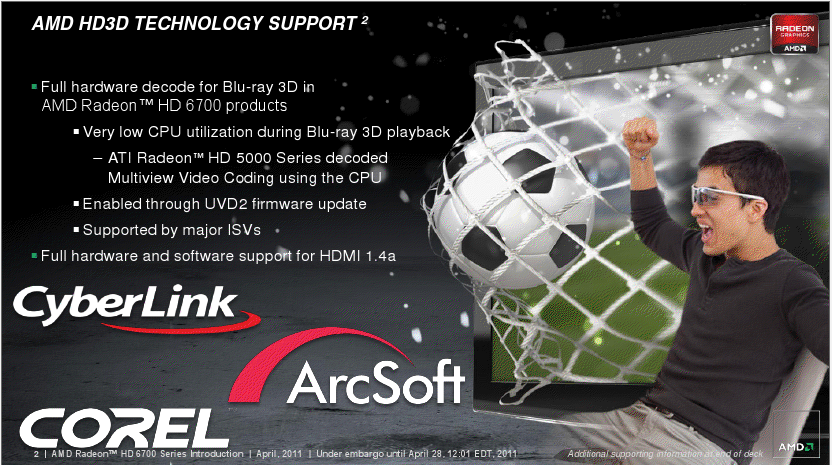 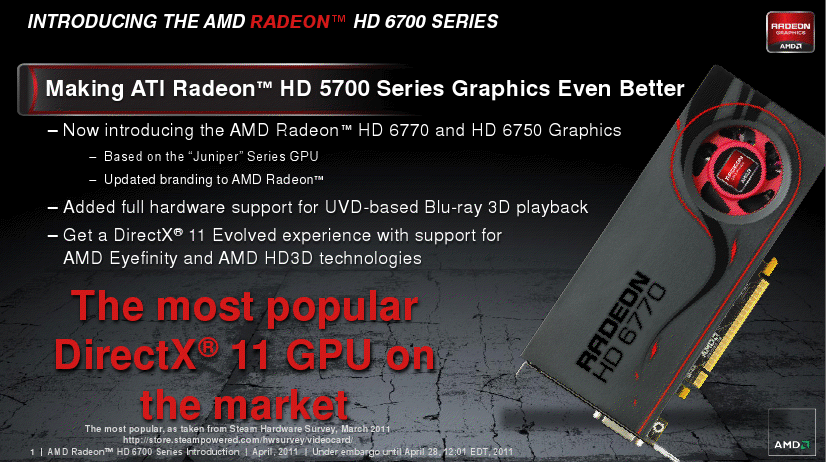 
Our Testing Procedure
All of our in game performance testing was run at 1920x1080, you can see the exact settings below. Here are the details for each of our tests.

Similar to the 5770 FleX edition, Sapphire has crafted their HD 6770 to support triple-monitor set-ups without using an Active Adapter. This means that using the included DVI adapter, and the two DVI ports built into the card, you can equip your rig with three monitors. This also means that if you do have an active adapter for the DisplayPort, you can use up to four monitors! What does that mean for you? 5760 x 1080 gaming! Although admittedly if you plan on running any REALLY intensive games you should look at the HD 6870 FleX or HD 6950 FleX, or if you are extremely picky, either in Crossfire. 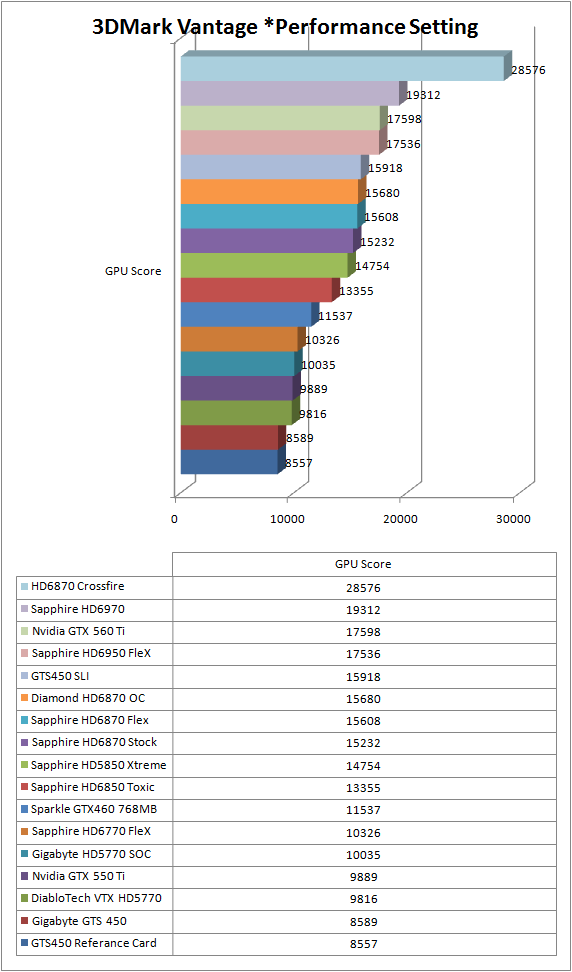 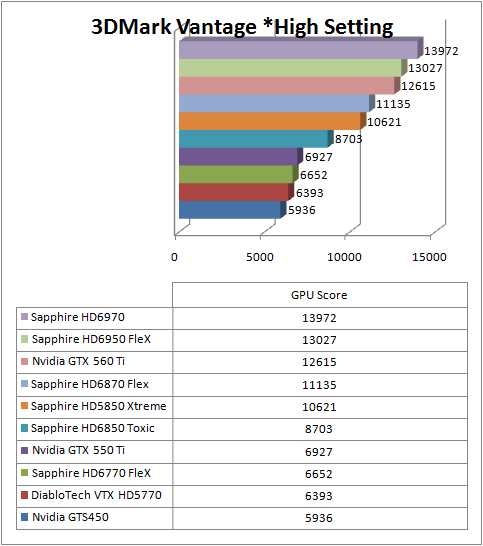 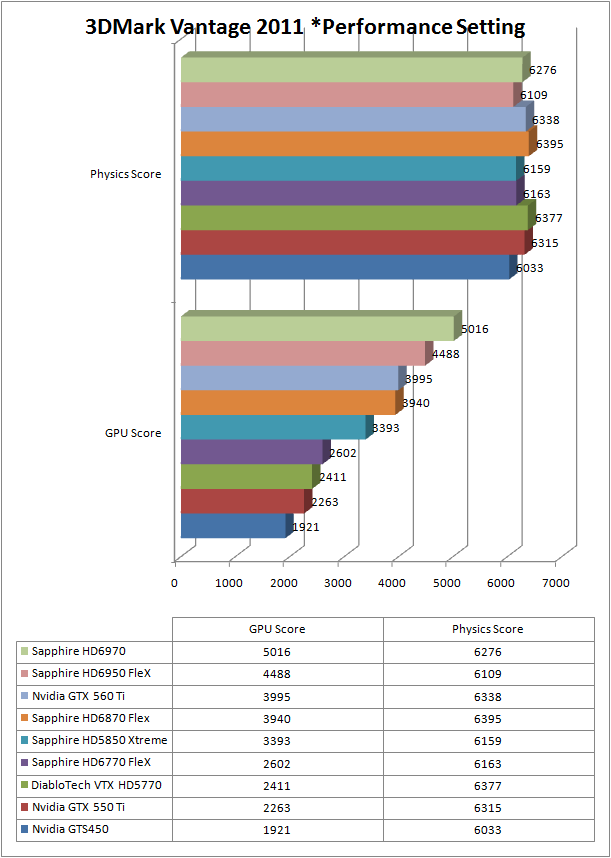 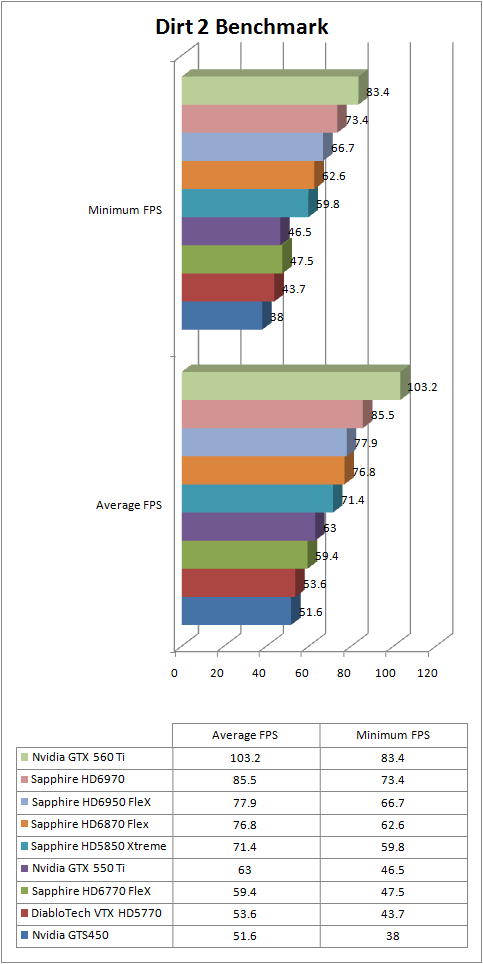 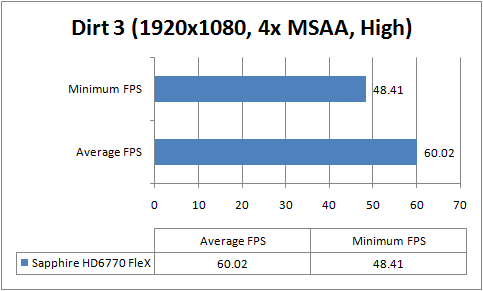 Our results show the HD 6770 coming in just above the HD 5770 in all of our tests. This small difference in most cases can be attributed to improvments in AMD's drivers over the past year. Thats not to say that this isn't a great card, its performance is still more than enough to play any game on the market. If you are planning on playing a few of the more graphic intensive games you will have to turn the settings down slightly for playable framerates, but as a budget card this is to be expected.

As for our testing beyond the HD 6770 Flex's in game performance. The HD 6770 performs well under pressure, keeping stable and cool. The fan does emit a quiet hum which is easy for me to notice when equipped on an open-air test bench, but unless you have super quiet case fans, you're not likely to hear it at all. All of this performance is spot on to our experience with the HD 6770's twin long lost brother, a card that we still use to this day in our Shuttle.


Overall
The HD6770 FleX edition performed on par and above with its 5770 predecessor, and includes the support features that made the card so valuable, plus a few upgrades to the BIOS otherwise exclusive to the Northern Island GPU's. Any rational consumer will share the concern that perhaps AMD will take the opportunity to squeeze a few extra dollars because of a new package. Rest assured, the HD6770 FleX from Sapphire is right on target with the pricepoint of the 5770, and in fact is five dollars cheaper through a rebate from Newegg.com. Granted, we have seen any of the specials that made the 5770 such an amazing value yet, but given a little time to settle, you're likely to be able to pick up a second for a heck of a bargain. 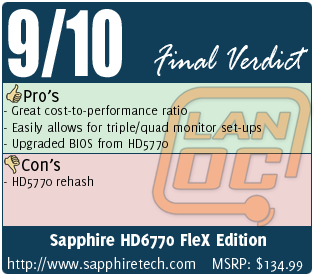 Author: Lersar
Contributing Editor / Event Staff
Adam is a big proponent of LAN parties, esports and speed-running, and helps organize our semi-annual LAN events. He has covered hardware and software reviews of a wide variety, but most content these days come from event coverage, such as other LAN parties.
Discuss this article
Log in to comment
Posts in discussion: Sapphire Radeon HD6770 FleX

We have 1561 guests and one member online