Only a few weeks ago AMD introduced their 6800 series cards featuring both the 6850 and 6870. We covered the 6870 with both Single and Dual card reviews. It didn’t take long to see non-reference designs coming from Sapphire with their Toxic HD6850 being announced today. We have had the pleasure of putting the card through its paces to see how it compares to the 6870 in both price and performance. With the GPU being clocked at 820MHz over the stock 775MHz and a memory frequency bump of 400MHz, from 4000Mhz to 4400MHz it should perform well. But with a few less shaders, compaired to the HD6870, will it hold its own? How will it compaire to Nvidia's offerings?

-····· Certified power supplies are recommended. Refer to https://ati.amd.com/certifiedPSU for a list of Certified products 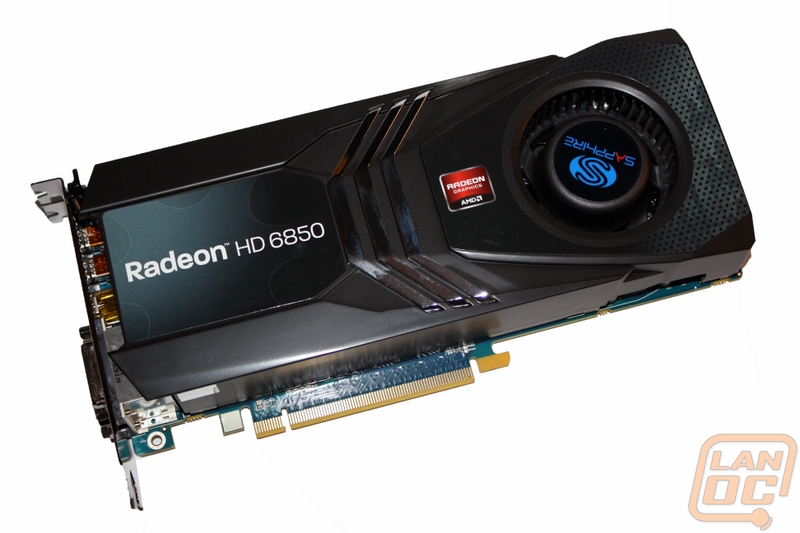 The HD 6850 strays from the ordinary in consideration to its fellow HD card packaging, featuring a cooler color pallet and a male mascot in place of Ruby. The artwork will have no problem appealing to its gamer demographic, a hooded mage persona in midst of conjuring a spell. Accompanying the card's series is the motto 'Sapphire Toxic', giving the after-market cooler a bit of personality. Additional features are called-out amidst the box, including an overclock sticker, 1GB of GDDR5 memory, and a plethora of thumbnail details running along the bottom. 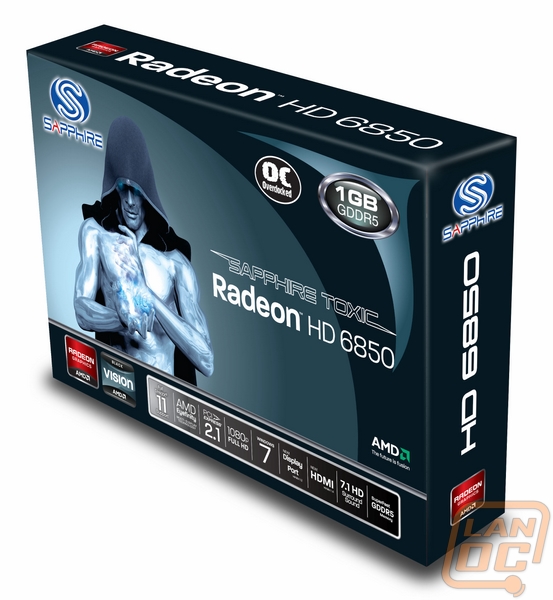 Inside the premium sleeve, you'll find a much more ordinary box that folds open width-wise briefcase-style. Contained inside is another box for your opening pleasure, as well as the card itself, sealed securely in an anti-static sleeve bag. The PCI interface is cushioned from underneath with a block of foam to ensure no damage is done to the exposed board. 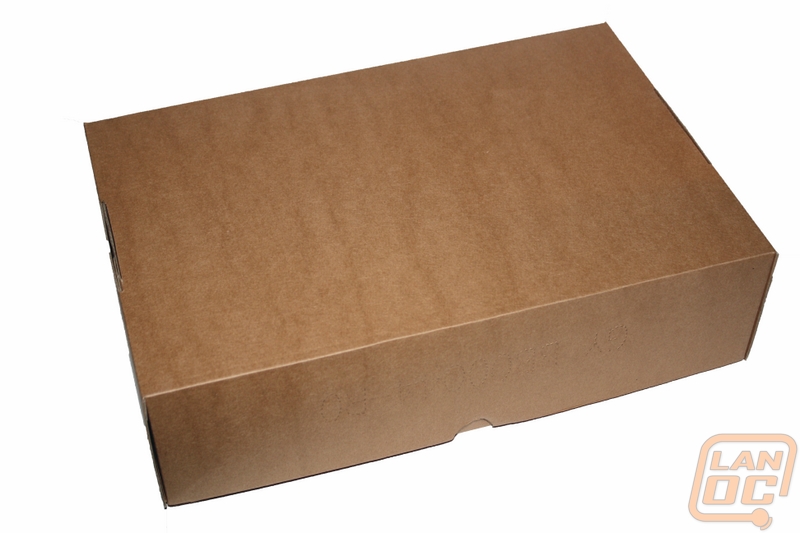 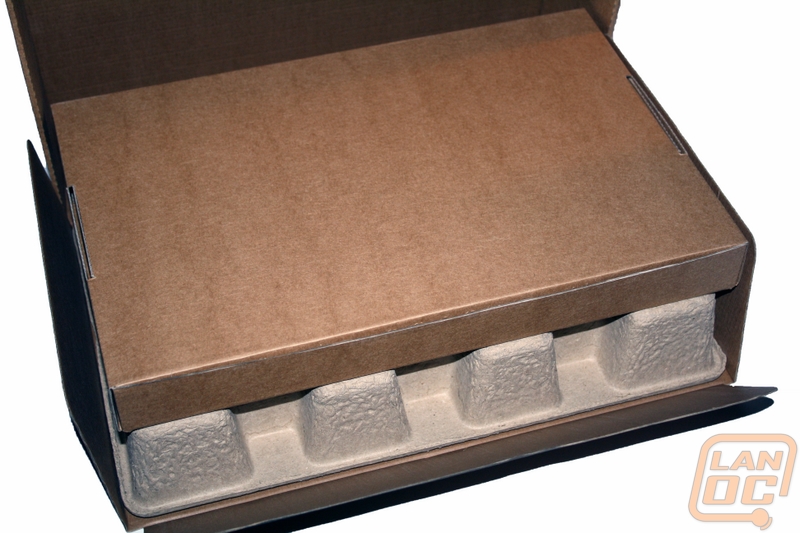 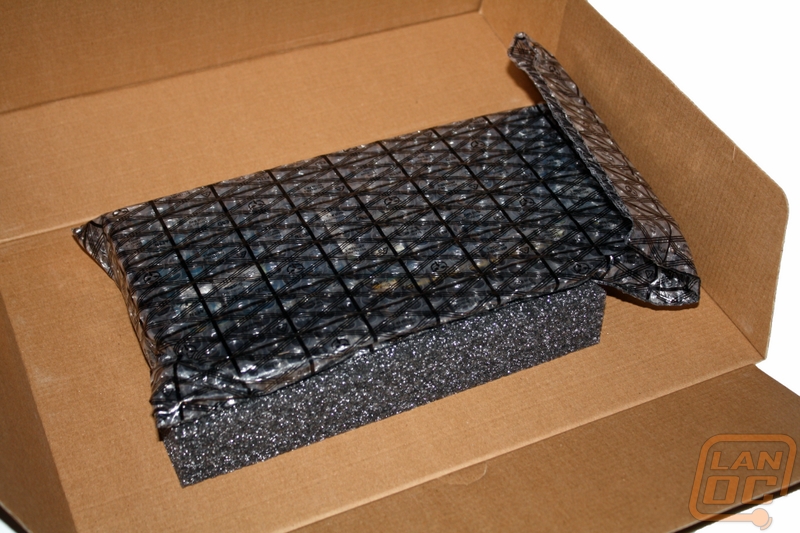 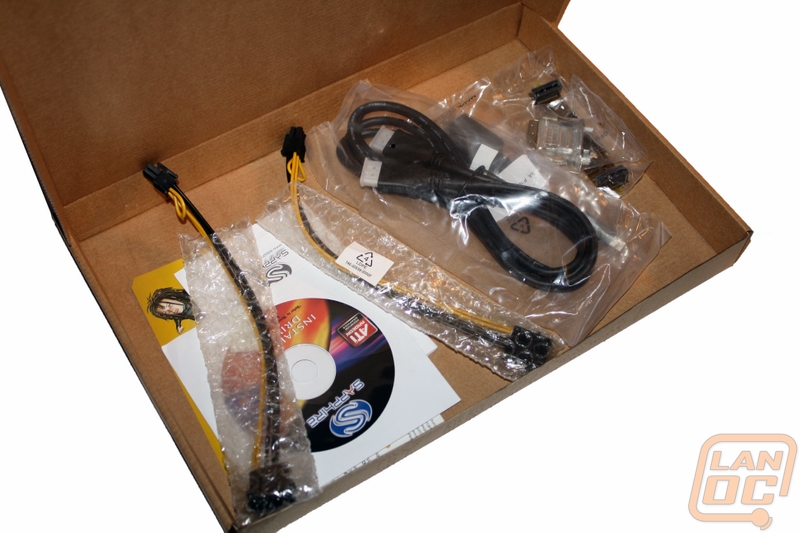 You'll be greeted with several accessories goodies upon opening the thinner container inside. AMD has included a more than convenient HDMI, which will save you around $30 if you don't already own one, or save you the time and frustration of tracking down an extra one, as was our case when testing. Also included are two 4-pin Molex to 6-pin converters to expand compatibility with power supply units, a mini-display to display port adapter, VGA-to-DVI adapter, and a Crossfire bridge. 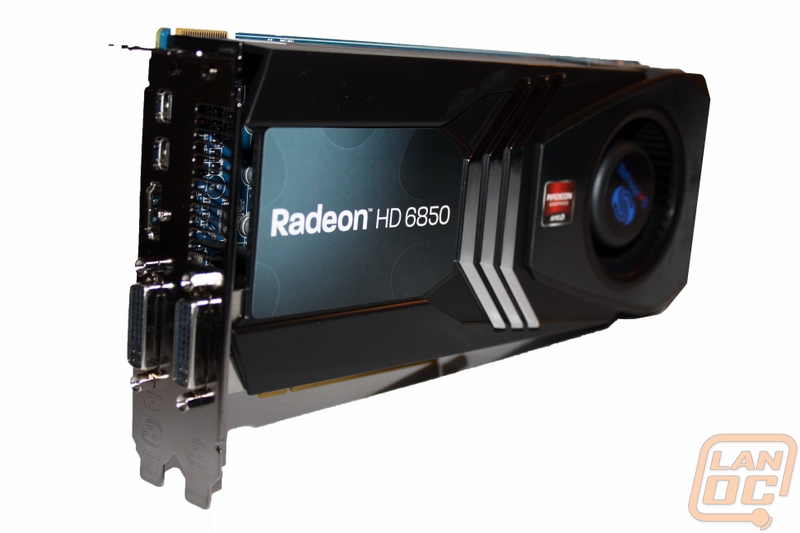 Of course with all this talk about the bump in performance Sapphire gave the HD6850 with the Toxic, we had to play a few games with it. While we had it installed on the test bench we also took a closer look at the aftermarket cooler included to see if it offered an improvement in cooling performance or noise level. On to the performance numbers... 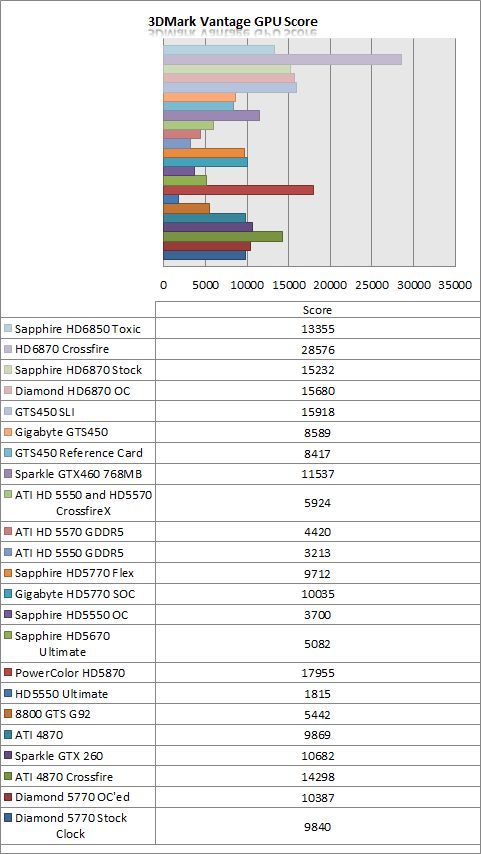 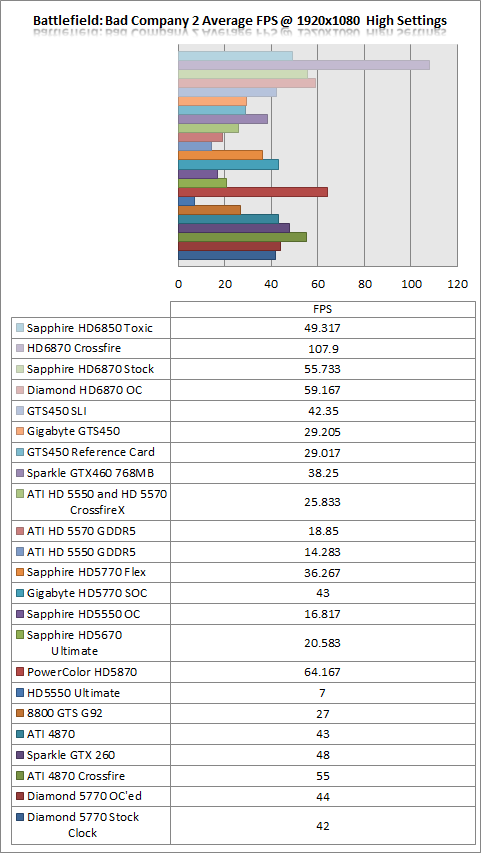 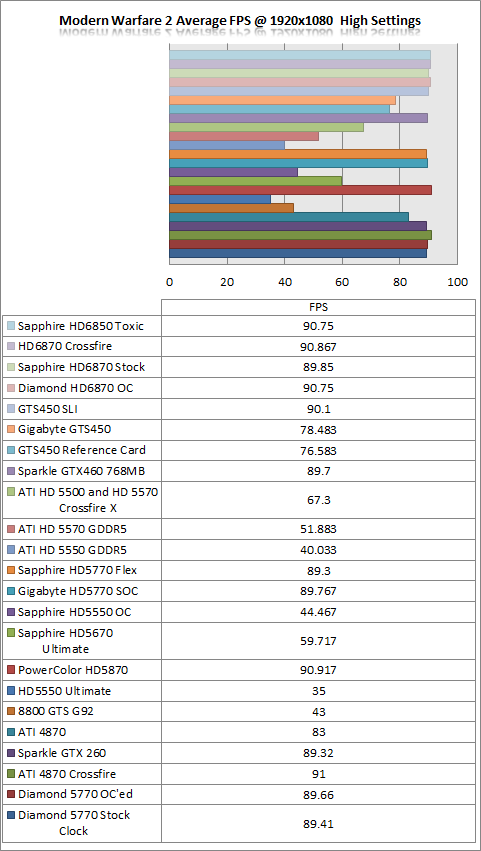 Although we don't have a database of 3DMark Vantage results using the high setting, here are our results. Expect to see this test being used in future reviews! 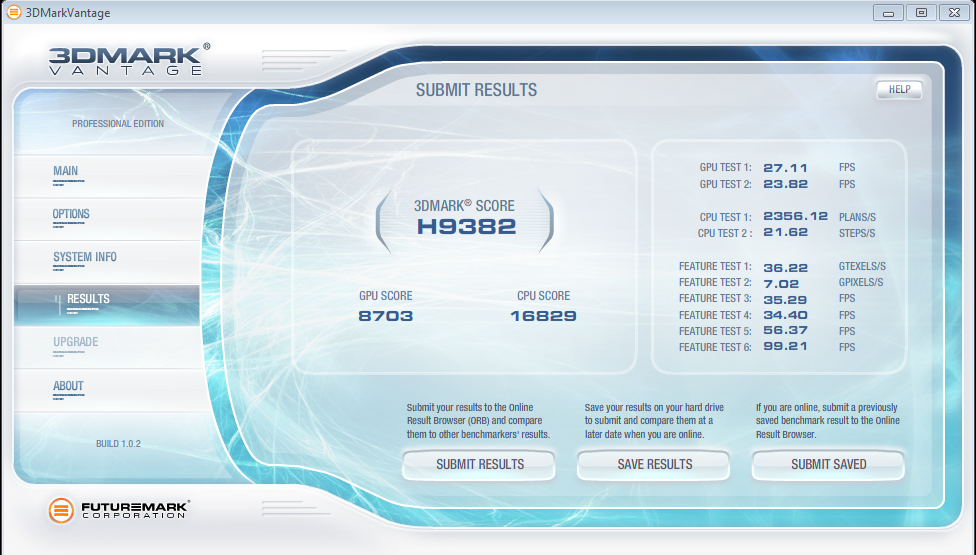 As expected the HD6870 Toxic numbers came in a little below the HD6870s' we tested previously. The lower stream processor count (1120 to 960) is what holds it back. Having said that, the performance in the normally tough Battlefield Bad Company 2 was more than playable. Though in 3DMark Vantage you can see a noticeable difference in scores, the real world performance didn’t reflect it as much.

Outside of the raw performance of the HD6850 Toxic it’s important that it does an adequate job keeping everything cool and quiet. With an overclock you would normally see a bump in heat, not that the HD6800 series is very hot in the first place. The Sapphire original cooling does a great job keeping the overclocked card running cool without sticking out or being large and obnoxious like some aftermarket coolers. The cooler has a stock style, but is unique to Sapphire and different than the reference cooler we have seen to date. 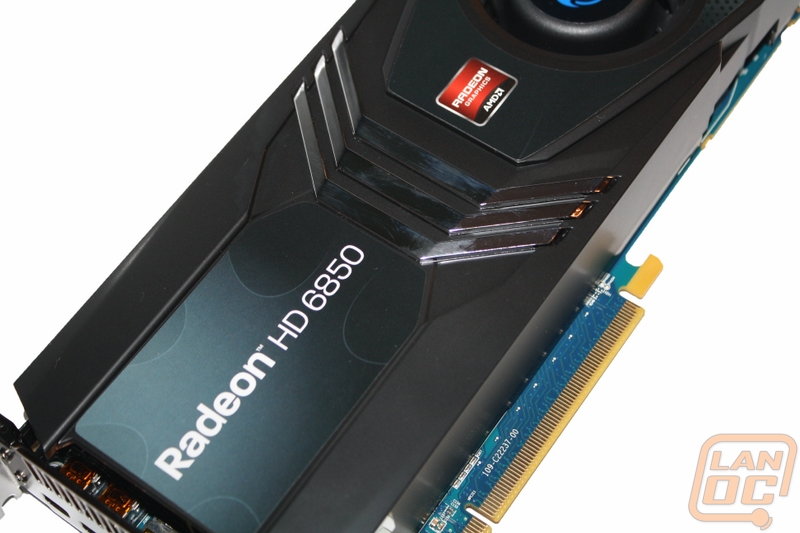 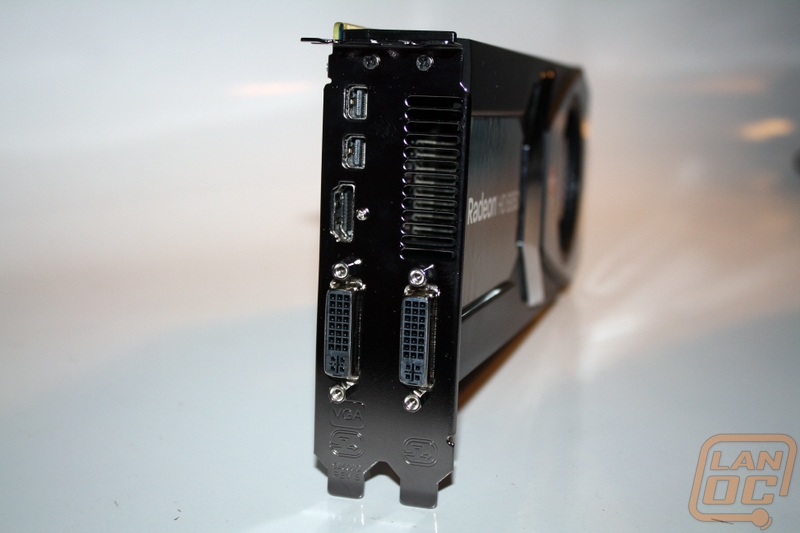 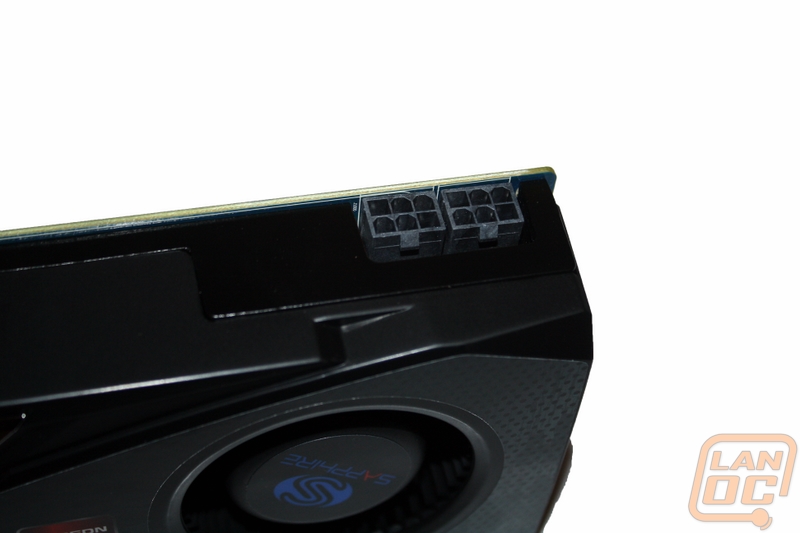 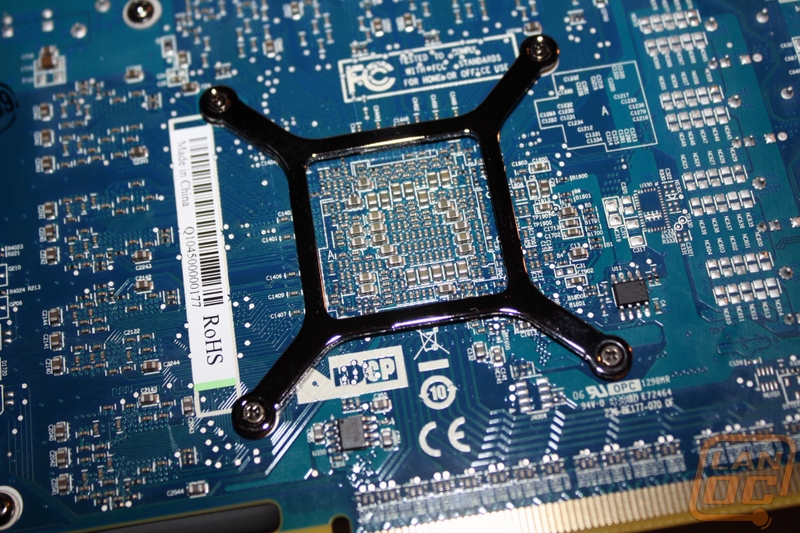 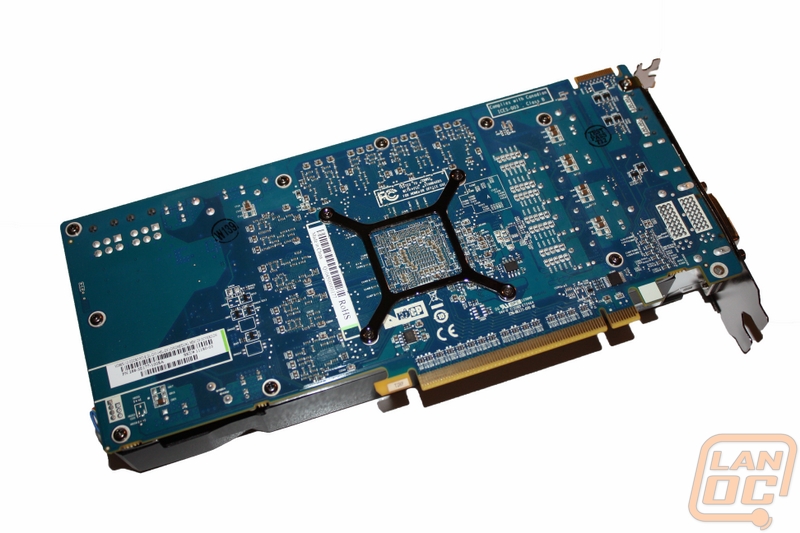 Similar to utilities that we have seen from other manufactures, Sapphire has introduced its TriXX Overclocking Utility to help everyone get the most out of their 6870’s and 6850’s. The only way to download the program is to sign-up on their Sapphire Select Club for a free account; if you register your card you are given gold access. Gold access gives you a chance to sign up for software/game giveaways along with access to TriXX.· Downloading TriXX however is limited to those who have registered their 6870 or 6850 currently. 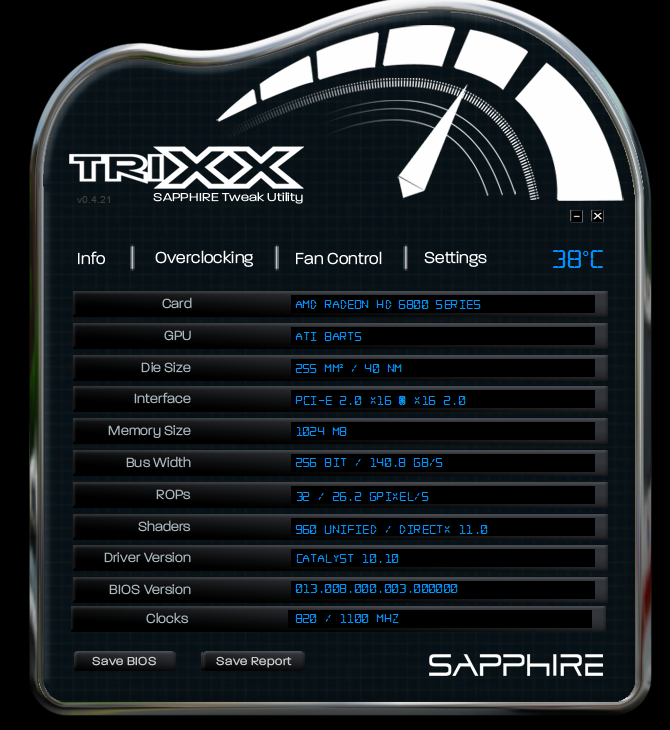 TriXX has four tabs to break down all of its functions into an easy-to-manage setup, similar to utilities from other manufactures. The Info page just about gives you every bit of information you could ask for about your card up to and including its ROPs, Shaders, Memory Size, Die Size, and even the BIOS version. Notable also is the Save BIOS option at the bottom; they haven’t included a way to update your video card BIOS, but you can at least save it. The overclocking tab is simple and right to the point. You can adjust your Core Clock and Memory clock like normal. To help you get the most out of your card you can also adjust GPU Voltage. You also have the ability to save and use up to four different profiles, letting you work on a faster overclock but keeping your stable profile to go back to. 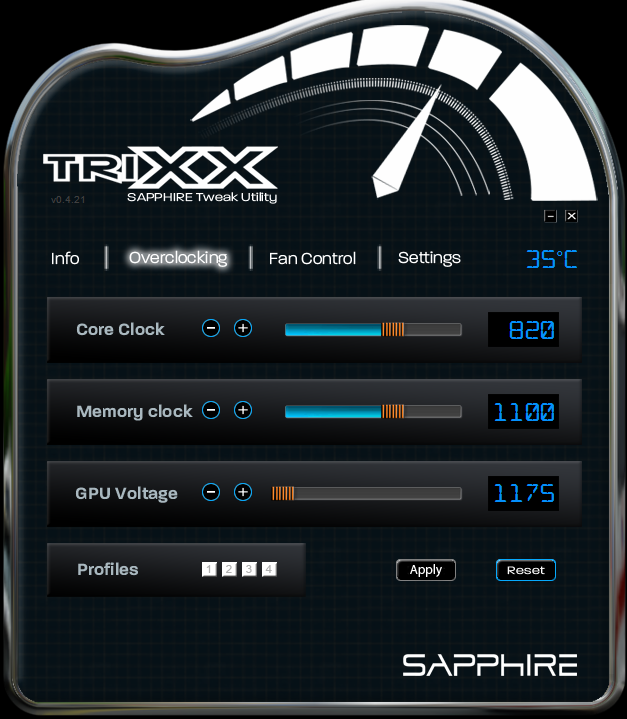 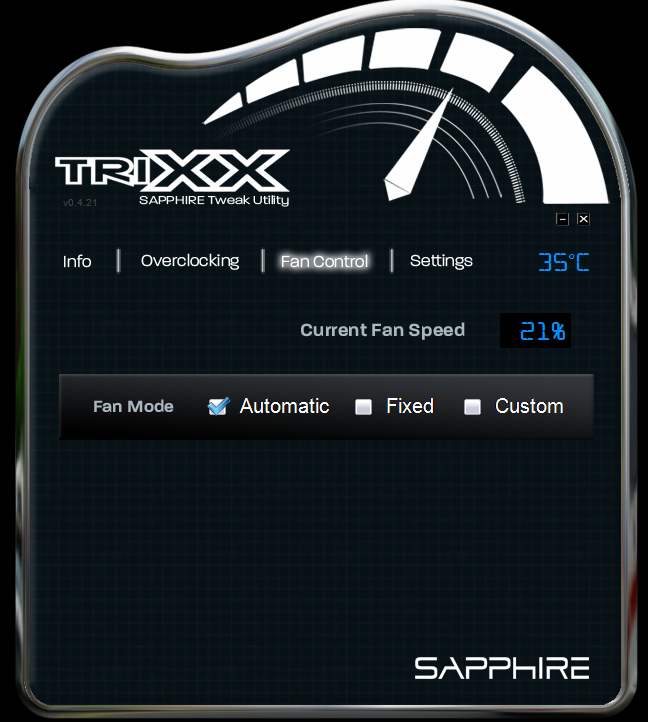 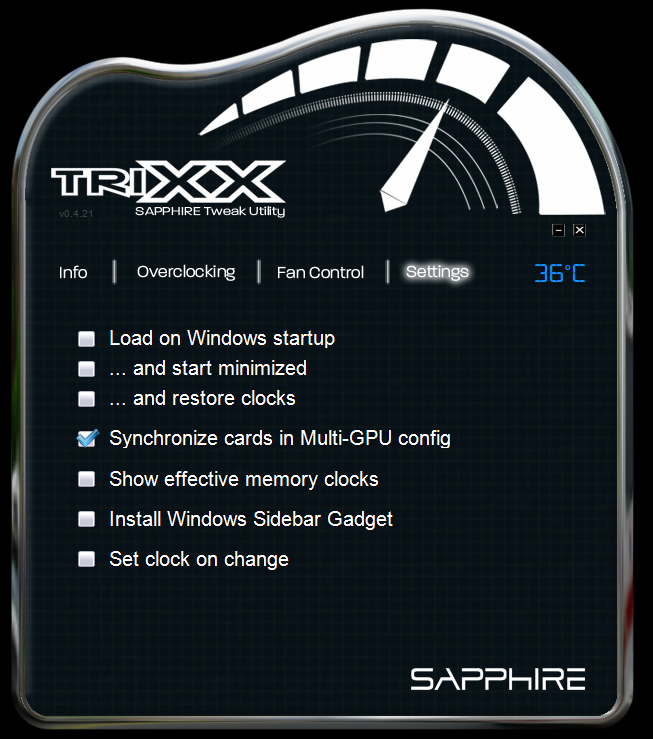 The Fan Control panel looks normal at first until you make it past Automatic and Fixed fan speeds. They have included a custom fan control mode that lets you adjust the fan speed depending on the GPU’s temperature. In other words you get to design your own fan profile, no more relying on AMD to find the best noise/performance ratio. The last tab is important but unexciting, as it is where you adjust all of your settings. Overall I was very impressed with Sapphire's TriXX. Although they did introduce TriXX originally back in the 2005 time frame, this time around they seem to have taken note of what other manufactures are missing and added it in (voltage control and custom fan profiles).

With the reintroduction of their TriXX overclocking utility Sapphire has given every HD6850 and HD6870 owner the chance to up the performance on their card. Even with that there is still a need for pre-overclocked cards for those who are looking to have a fast card that just works, without the need for any software tweaking. Without worrying about having the best card on the market, the HD6850 Toxic offers enough performance for all but the most demanding games. With a suggested retail of $219 currently the HD6850 Toxic costs just a little over a GTX 460, but as you can see the added cost buys you a nice jump in performance. 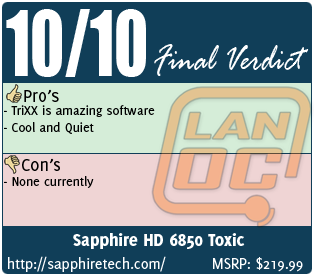 You might call him obsessed or just a hardcore geek. Wes's obsession with gaming hardware and gadgets isn't anything new, he could be found taking things apart even as a child. When not poking around in PC's he can be found playing League of Legends, Awesomenauts, or Civilization 5 or watching a wide variety of TV shows and Movies. A car guy at heart, the same things that draw him into tweaking cars apply when building good looking fast computers. If you are interested in writing for Wes here at LanOC you can reach out to him directly using our contact form.
Discuss this article
Log in to comment
Posts in discussion: Sapphire HD6850 Toxic

We have 1073 guests and one member online