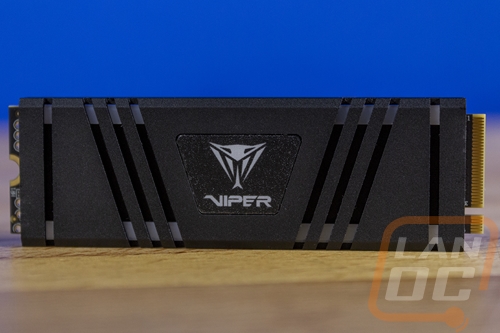 The packaging for the Viper VPR400 is similar to the last Viper SSD I took a look at, almost the same. They have a flip-out front which on the front has a bright red background and a picture of the VPR400 with its RGB lighting on. They have the read and write speeds listed as well as the capacity using a sticker which ours in the 1TB model. Up in the top half, the Viper branding is in a large font but the RGB is the largest font and clearly what they want you to see the most. Below the Viper brand name, they have the VPR400 model name in a small font and next to that they let you know this is a PCIe M.2 drive running at Gen 4 speeds x4 lanes. Also on the front, it has the Viper “rating” system which lets you know where this falls in the product lineup, this is their top of the line expert. The front opens up and you have a window to see the Viper VPR400 on the heatsink side and on each side they have the read and write speeds repeated. On the back side of the front door, they talk about the performance then about the heatsink and its 5-year warranty. Then around on the back they just have a few details listed out and repeated across multiple languages. It's important to note here that they list this being available from 512GB to 2TB but at least right now I don’t see the 2TB as an option on their website or in stores so maybe that is coming in the future. 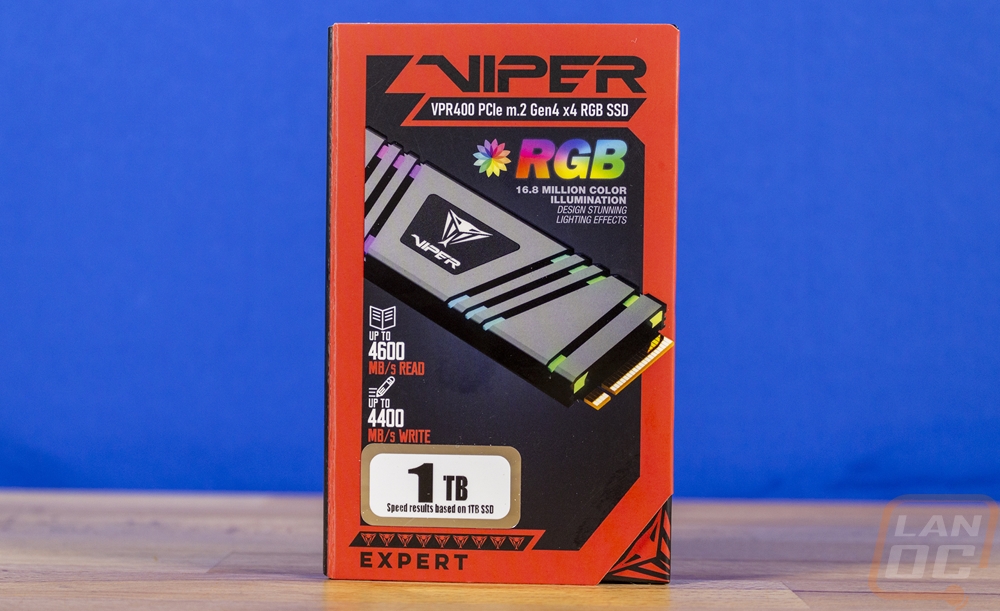 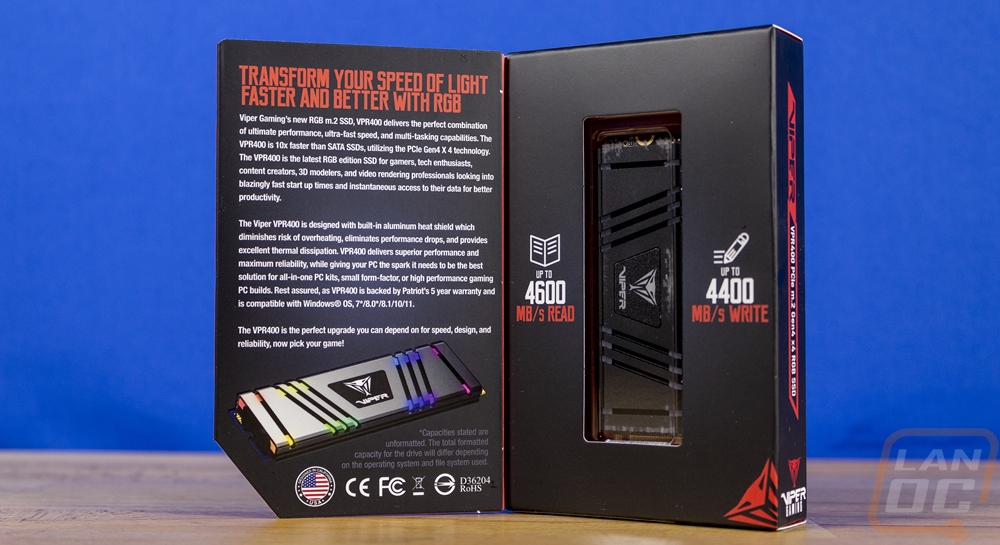 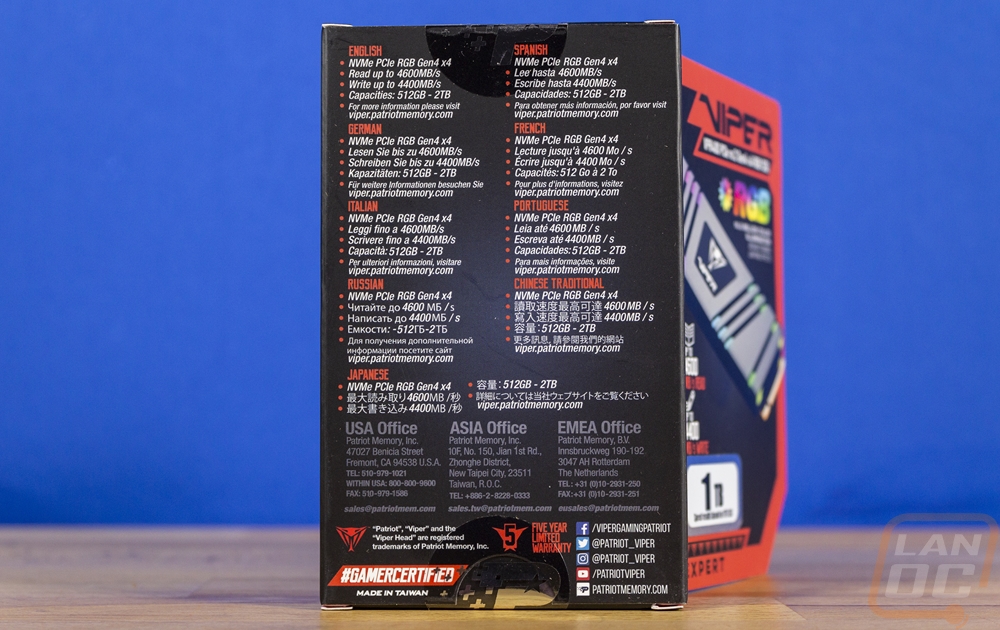 Inside the box the Viper VPR400 is the only thing that you get, there aren’t any stickers or any documentation. I’m surprised on the stickers because Viper does include those sometimes but it's not a big deal at all. The Viper VPR400 comes in a clear plastic tray which was needed so it could be seen through the front window on the box. 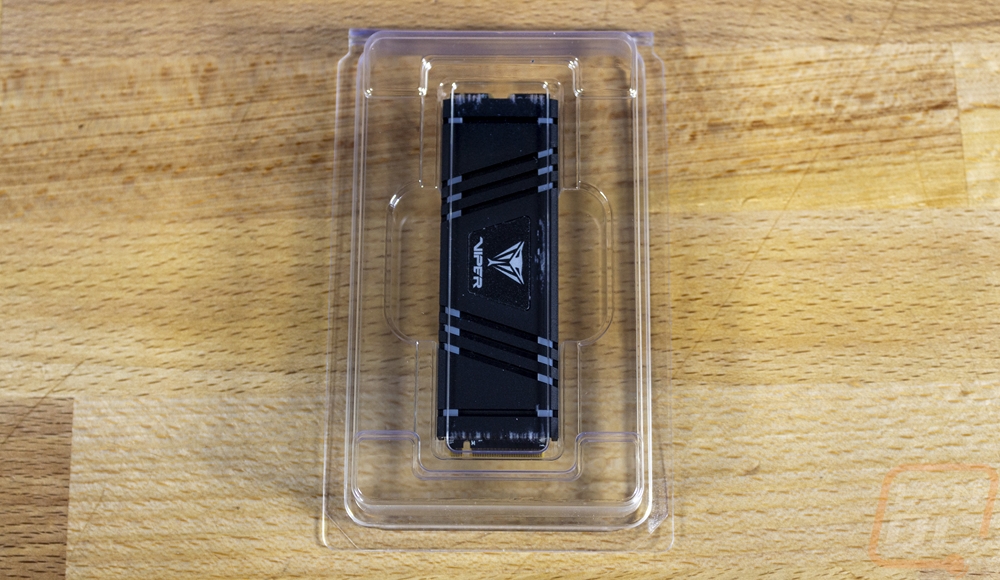 If you saw our previous Viper VPR100 review the overall look of the Viper VPR400 may look familiar, that is because they share the same heatsink design. The heatsink on the Viper VPR400 is aluminum with a textured black finish. In the center, they have the Viper brand name and logo. Then moving out from there it has angled cuts in the heatsink that give a little more surface area and match up with the logo in the middle. Those cuts also give us a peek at the LED diffuser bars that run across the top and bottom for the RGB lighting. The Viper VPR400 is available in 512GB and 1TB capacities right now but the packaging and some documentation does allude to a 2TB model in the future as well and it is a 2280 length M.2 which is the standard length you would see. 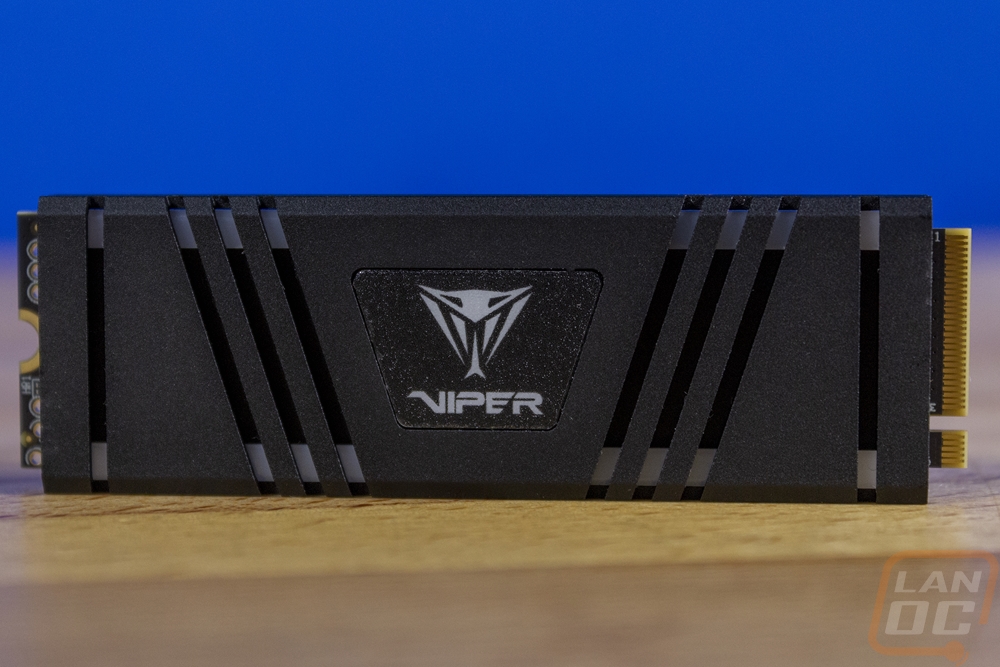 The back side of the Viper VPR400 doesn't have too much going on. We can see the black PCB along with a few components. Specifically, along the top and bottom edges, we can see the fives spots on each row where they have the RGB LEDs on the other side. Beyond that, they have a white sticker that covers most of the rest up. This sticker has all of the normally required certification logos and manufacturing location information. It has the full model number which is VRP40-1TB28H and the serial number with a bar code. It also has the capacity of the drive printed on it as well in the biggest font so it is easy to spot.

The side view of the VPR400 gives a much better look at how the diffusers run down the edges to soften up the RGB lighting, we can also see that the middle of the heatsink is thicker and does run down the middle where the DRAM and controller are to pull some of that heat away. It also wraps around the sides as well.

With the heatsink off we can get a better look at what the VPR400 has going on under the hood. The biggest thing is we can see that 2TB support is in the future for sure as this is the 1TB model and they have two NAND pads empty. The VPR400 has small surface-mounted RGB LEDs in 5 locations along the top and 5 along the bottom but if you look closely you can see four more in the center sitting on the left and right of the third NAND pad. As for what makes the SSD itself tick it has two NAND chips with  8FC00585 and AC-W012-220103013 etched in them which doesn’t bring anything up on a search but seem to be 176-Layer Micron TLC NAND. The VPR400 is Dram-less so there isn’t any memory on here for cache. Then down at the end near the M.2 connection is the controller which is an Innogrit IG5220. The Patriot P400 that I reviewed back in March had the same controller. 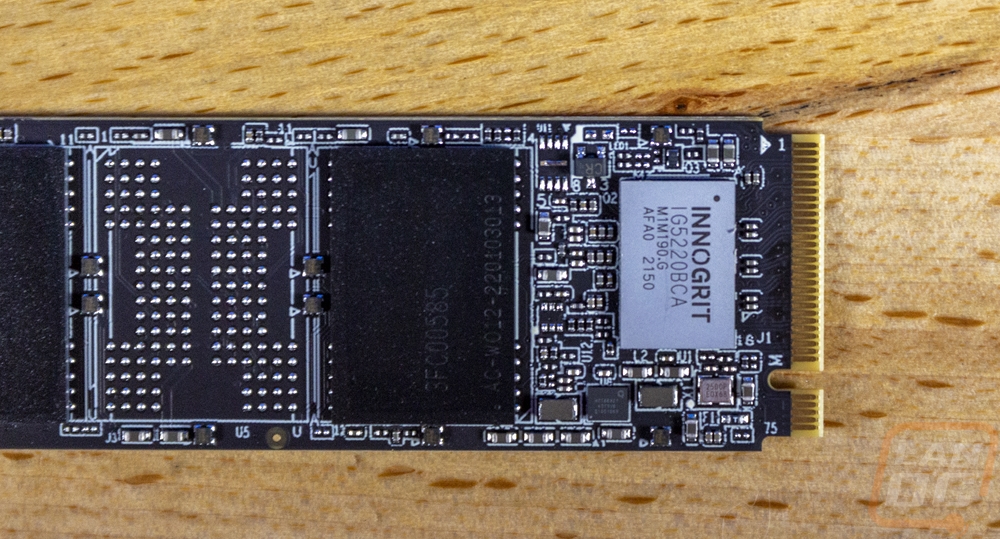 I did also take a look at the lighting once I had the VPR400 installed. By default, the center lighting stays on and rotates through colors and the top and bottom edge lighting has a breathing effect while switching between colors. All of the popular motherboard software is supported so you can also tie the lighting in with your other lighting or use Vipers software to set the lighting to something you like or matching your build.