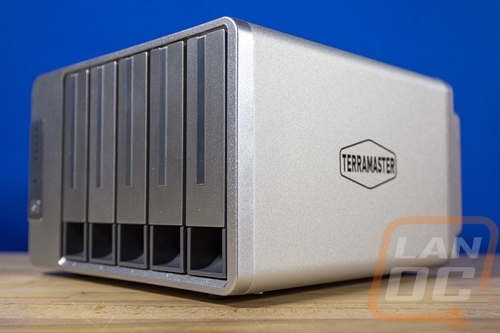 Like I mentioned at the start of this review. Storage needs vary a lot depending on the person. For some people, a NAS is the best option because it can be accessed by any PC on your network. But there are some situations where a DAS or direct attached storage is a better option. Namely, if you have one PC or only want one PC to access the data or sometimes you might need to expand the storage on a server and don’t have any room for expansion. TerraMaster has a variety of options with both NAS and DAS and the D5-300 is one of their larger models with 5 drive bays. They do have a newer option as well that has a different configuration that has come out in the time that I have had this NAS (I’ve been really behind on this one). The D5-300C that I’m referring to does address a few of the issues I have with the D5-300 but there are situations where this is the better option as well.

So without a doubt, the overall capacity of the D5-300 is its biggest selling point. With five drive bays combined with today's huge drives, you could set this up with up to 90 TB of data though I do think the speed limitations of USB and of the D5-300 itself might make going THAT large a little frustrating. What I like about this though is the relatively simple setup. Once you have the drives installed you give it power and plug it in and all five drives are going to register in windows. If you just want to have this as a desktop expansion without any RAID this would make setup very easy. I can see someone like a lot of Youtubers who have stacks of external drives using this to keep a few current drives in and swap between old drives.

If you want to set up a raid and I would suggest you do, the D5-300 has a hardware level raid but you will need to install a program to set it up. I do think that a manual switch like TerraMaster has done on some of their options including the new D5-300C would make this easier. But there is one area that the D5-300 that stands out because of the software. Unlike the switch option, with the software, you can set up more than one RAID at a time. So you could have a RAID 0 with two drives for speed and then the other three drives in a RAID 5 or two different RAIDs and then a single drive. I do suggest setting up a raid though either way, redundancy is important if you care at all about the data, and with some RAIDs, you can get both that and extra speed offered by striping.

As far as speed goes, the D5-300 isn’t the fastest option out there. The USB 3.1 Gen 1 connection itself is a limitation, but the D5-300 isn’t able to even get up to the speeds that the USB connection is capable as well even with SSDs. I did see better performance than TerraMasters specifications, but do know if you need performance the new D5-300C does speed things up.

This brings me to the pricing. The D5-300 has an MSRP of $259.99 which I will say that you can find a few DAS enclosures that have five drive slots at around $200 if you aren’t interested in RAID at all. The $259 price point isn’t too bad once you include the RAID controller but TerraMaster themselves have made the D5-300’s price look a little high now that the D5-300C is out for $219 and is faster. Both aren’t bad options, but unless you need the flexibility that the software configuration offers it’s the D5-300C that I would go with assuming it performs as well as promised. I do wish I had one here to confirm that though. 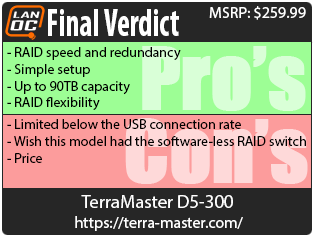 You might call him obsessed or just a hardcore geek. Wes's obsession with gaming hardware and gadgets isn't anything new, he could be found taking things apart even as a child. When not poking around in PC's he can be found playing League of Legends, Awesomenauts, or Civilization 5 or watching a wide variety of TV shows and Movies. A car guy at heart, the same things that draw him into tweaking cars apply when building good looking fast computers. If you are interested in writing for Wes here at LanOC you can reach out to him directly using our contact form.
Discuss this article
Log in to comment
Posts in discussion: TerraMaster D5-300

We have 1221 guests and one member online