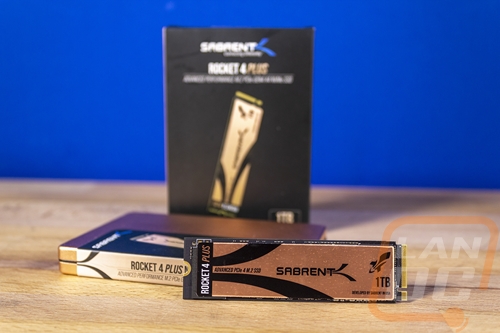 Before getting into testing I did run CrystalDiskInfo to document the Rocker 4 Plus’s firmware version and to make sure it is running at the correct transfer mode. Which in this case means making sure it is running a PCIe 4.0 x4 not as a Gen 3.0 and it was. 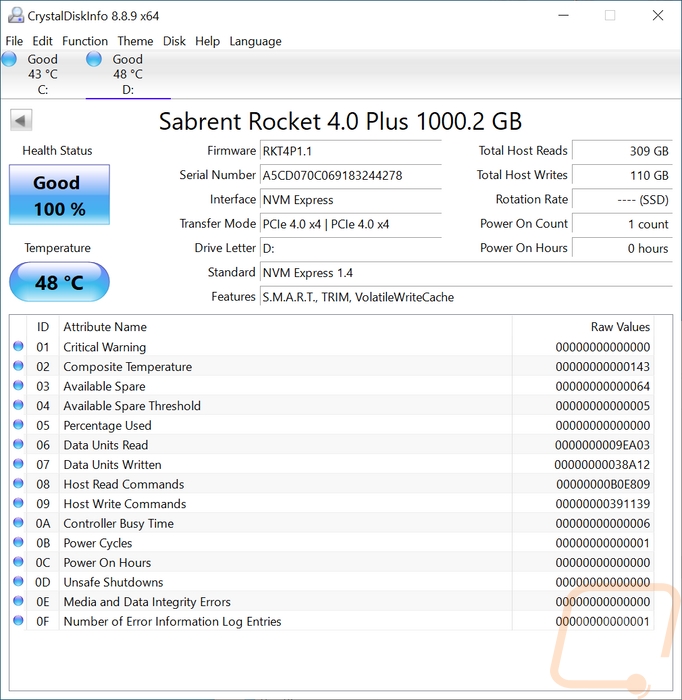 My first round of tests were using CrystalDiskMark 7 which is a popular test that does a great job with its sequential tests to get the highest possible performance numbers out of drives. The Rocket 4 Plus did great here, for its performance in the sequential 1M test its read performance was 6558 MB/s with just the WD Black AN1500 which had two drives in raid outperforming just slightly. Its writer performance wasn’t as strong but was still at the top of the charts with it reaching 4475 MB/s.

I also took a look at the IOPS performance in CrystalDiskMark 7, specifically on the random 46 test at a queue depth of 32 and 16 threads. The Rocket 4 Plus didn’t do as well here, especially with the rear IOPS being lower than the Rocket Q4 but the writer performance improved over the previous drive but was still much lower than the rest of the drives tested. 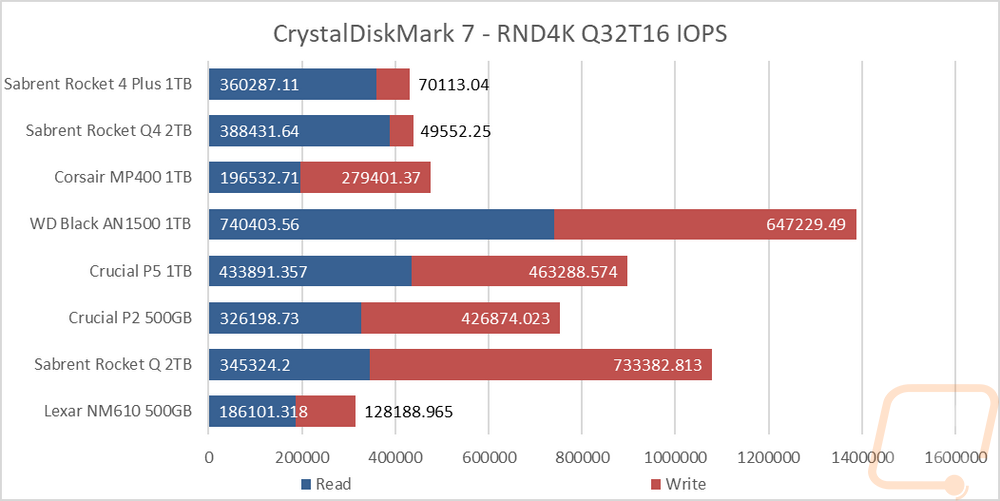 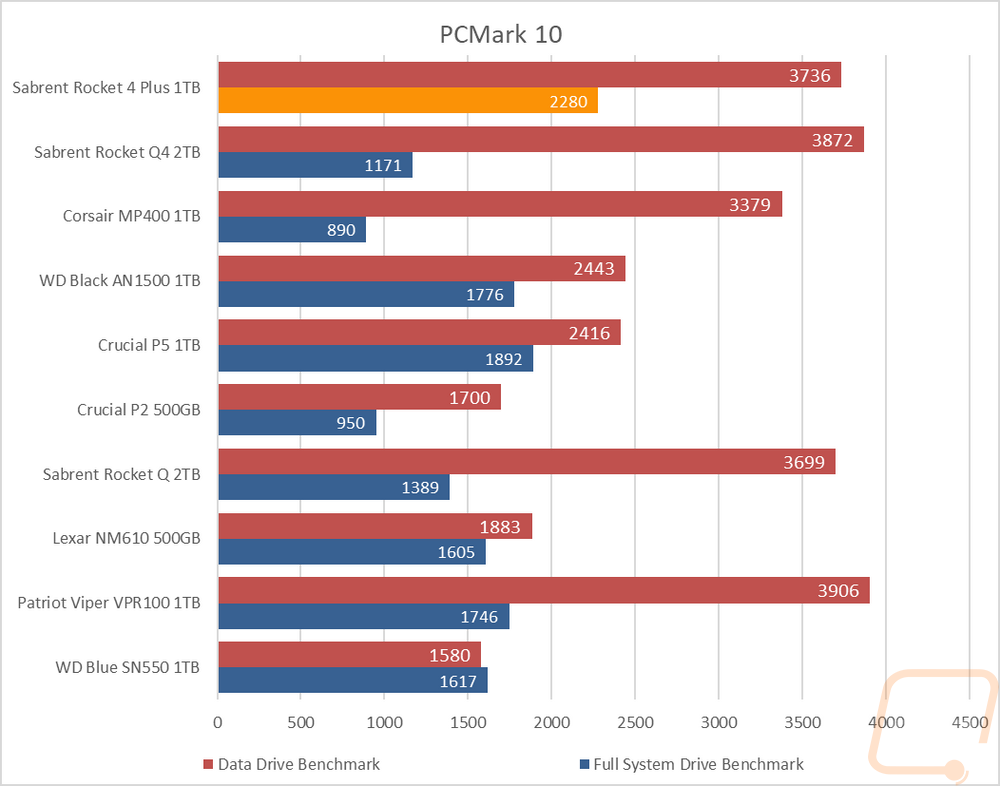 The next benchmark was using AS SSD which its base benchmark is very similar to CrystalDiskMark. I skipped that and use their timed file transfer test which transfers three file types to see how each performs. I stack all three together so we can see overall which drive has the best overall performance by seeing the shortest bar. The Rocket 4 Plus matched some of the faster Gen 3 drives in the ISO transfer and on the games but was a little slower than the top drives on the program file transfer causing it to come in slower than the Rocker Q4 and a lot of the faster Gen 3 drives. 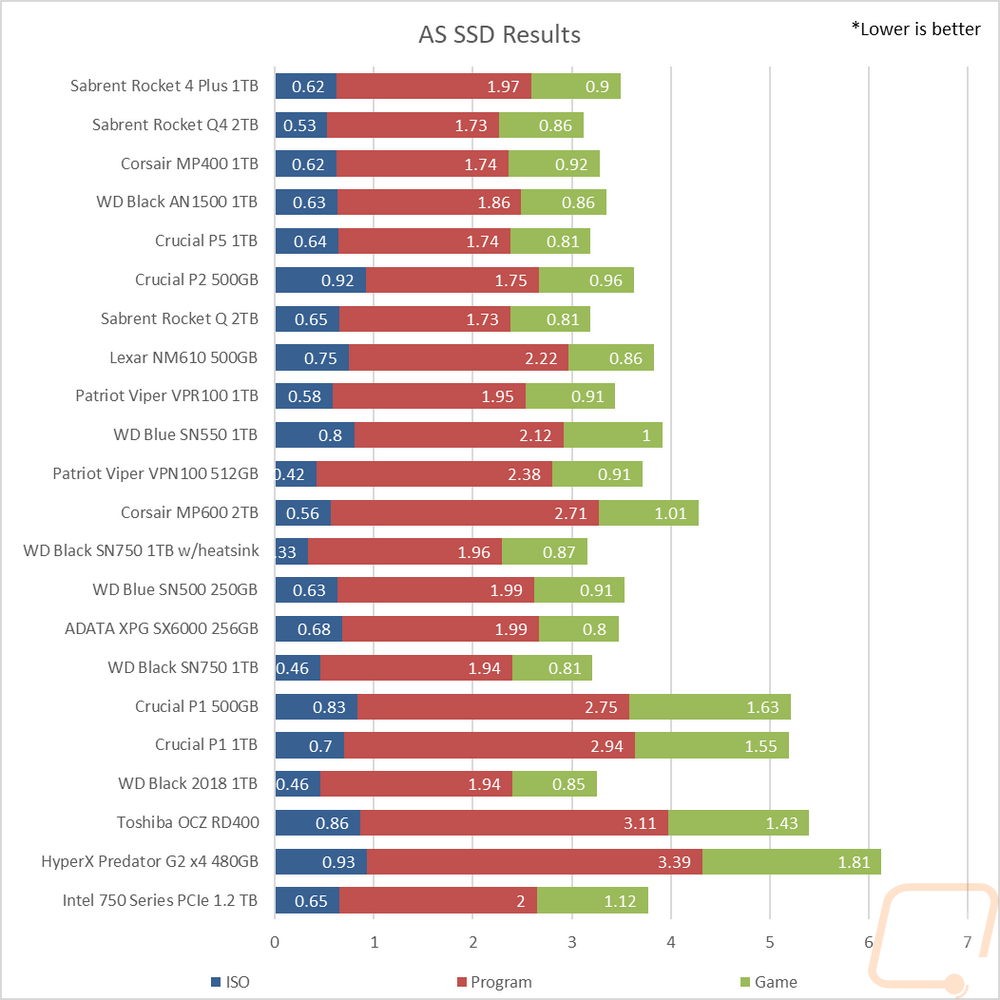 Next in Passmark, I ran a few different benchmarks. I ran the Passmark Performance Test 9.0 disk mark which runs a few synthetic benchmarks to create a score. The Rocket 4 plus didn’t do very well here coming in below the MP400 and down just above some of the budget Gen 3 drives. Then I jumped into the advanced disk benchmark which has four default tests that look at enterprise situations. The workstation workload didn’t turn out too back and was an improvement over the Q4. The same goes for the web server workload which was the fastest of the four workloads on the Rocket 4 Plus, but there are drives like the WD Black drives that do much better on that and the file server tests. Then the database workload is the only result that has the Rocket 4 Plus out ahead of most of the drives tested with it performing right with the Intel 750 Series SSD and the SN750. 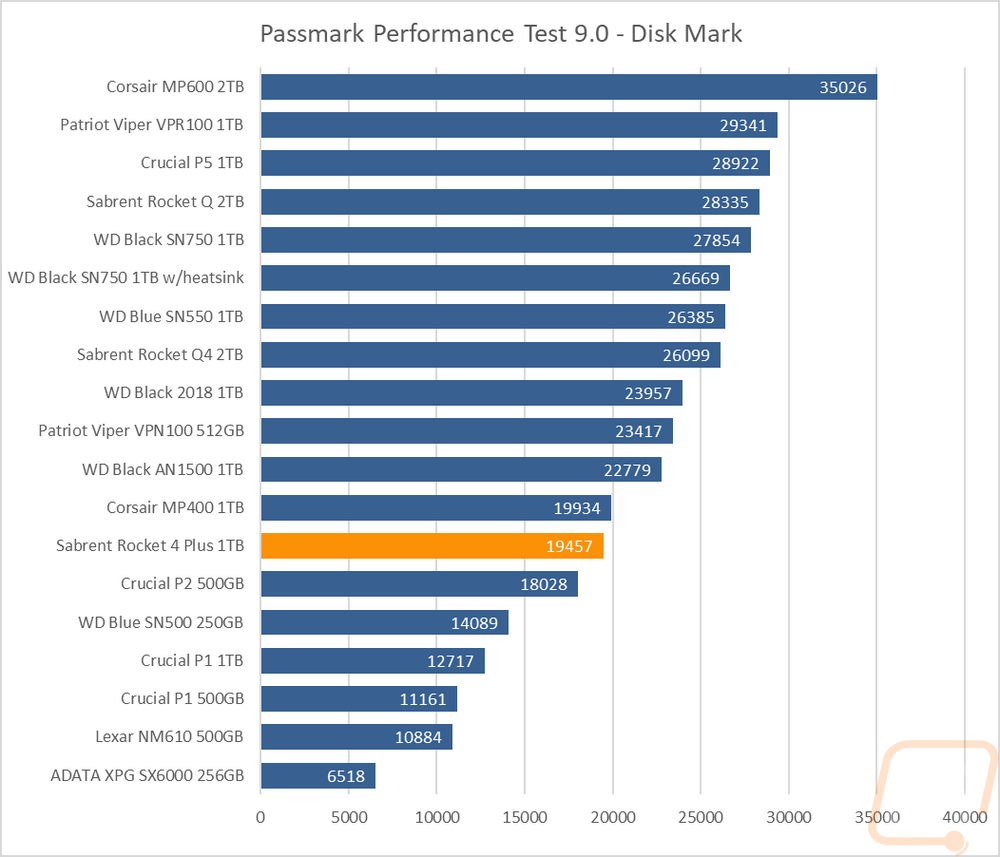 In Anvil’s Storage Utilities I jumped back into IOPS benchmarks. Here I take a look at a less demanding situation where we have just a queue depth of 16. Here the Rocket 4 Plus was up near the top of the chart with just the Corsair MP600 being slightly faster. The read IOPS were the fastest tested and the write IOPS were the second fastest overall, competing with the MP600 on both. 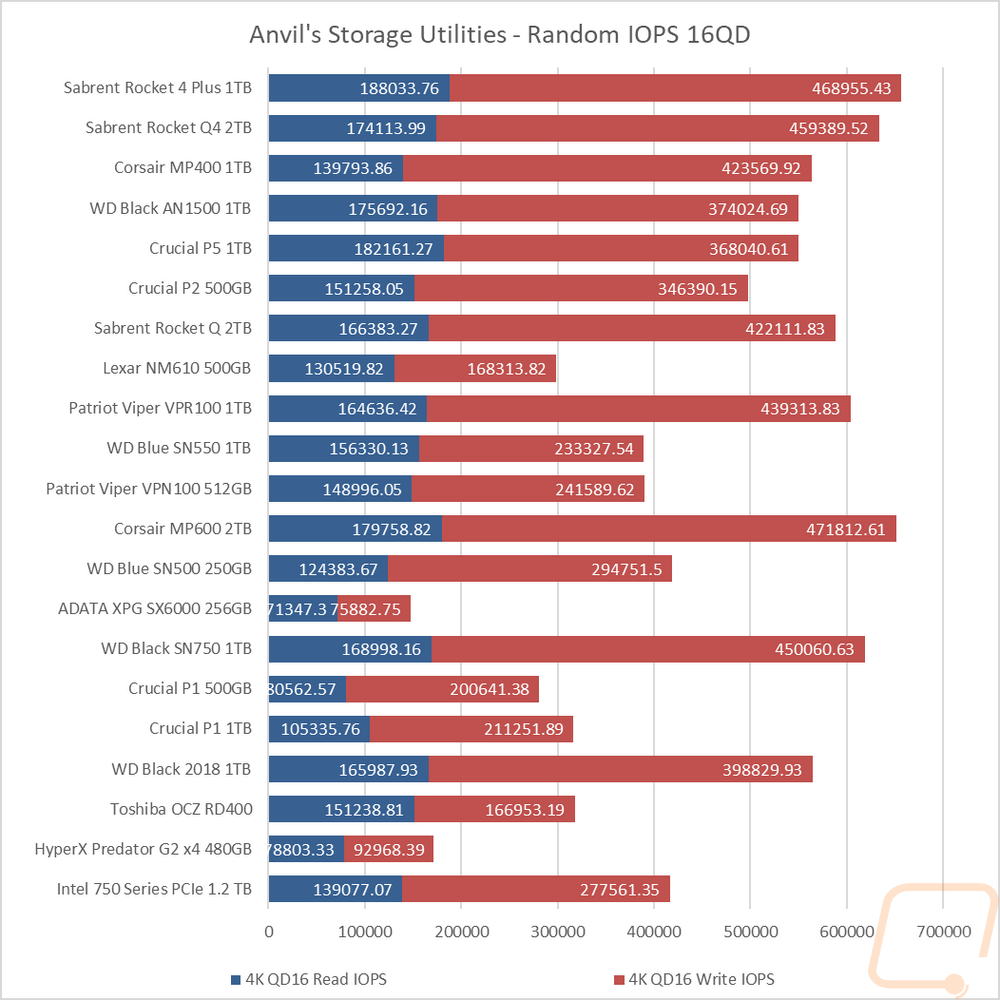 Also in Anvil’s Storage Utilities, I did some manual testing as well. I ran tests of different queue depths for the read and writes to see how the controller handles things as they ramp up. I was curious on these because in my IOPS testing earlier the Rocket 4 Plus was slow with a single queue and thread but in the above test with a high queue depth, the write IOPS were impressive. The write transfer speeds weren’t slow at a single queue depth, in fact, they were one of the fastest with the exception of the Intel 750 and it stayed ahead of every drive up until the queue depth of 32 where it then fell off and dropped down slightly on the last test. The read tests weren’t as impressive, it did well at a single queue depth and up until a queue depth of 32 then it leveled off letting a lot of drives did significantly better on the high end. 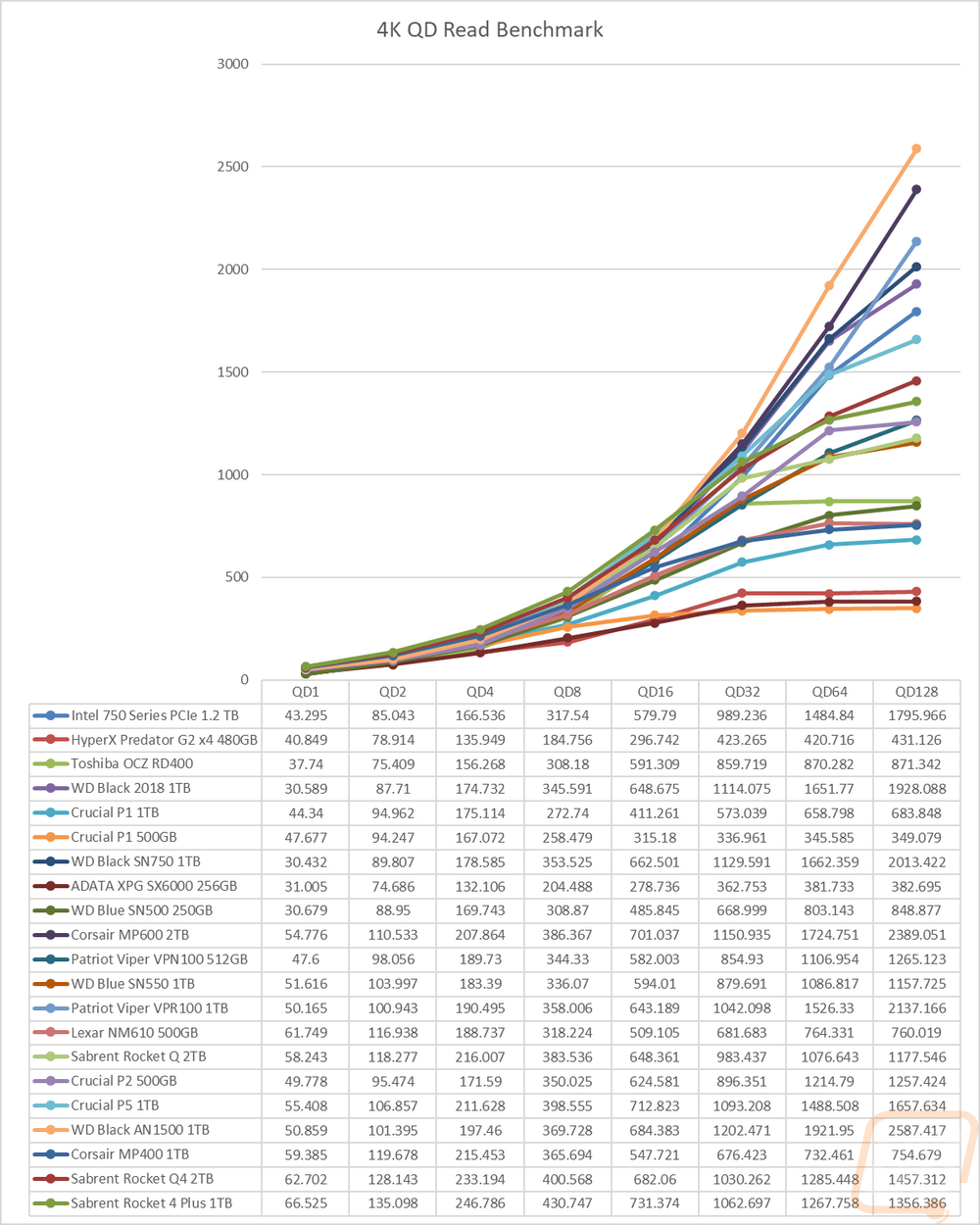 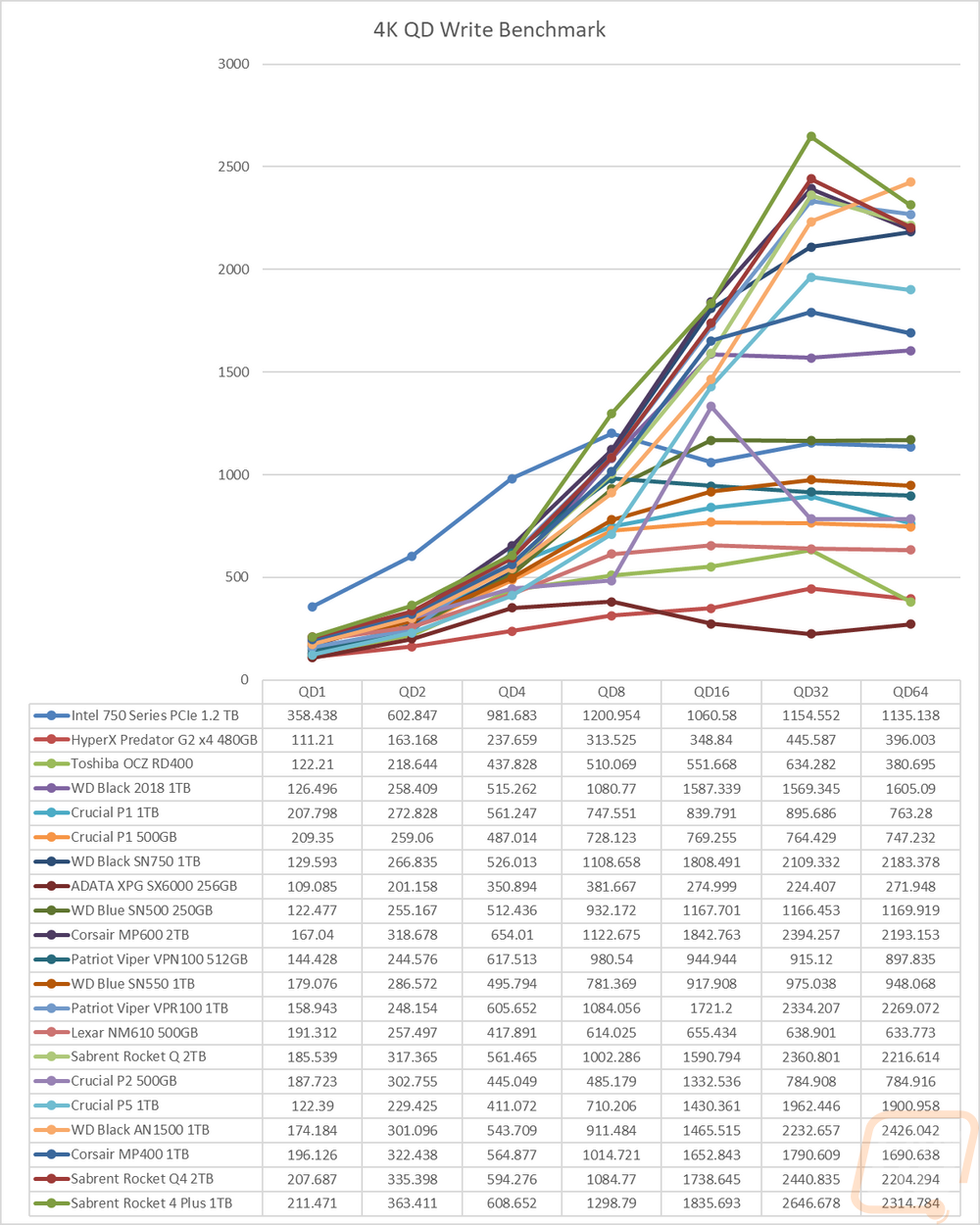 My favorite round of testing is still the actual real-world tests where I transfer files to and from the Rocket 4 Plus. For this, I have three folders, one filled with large movie files, another with RAW and JPG pictures, and a third with word documents. The movie files are large and look at sequential performance and are most likely to transfer the fastest, word documents are on the other end of the spectrum as they are tiny and very slow to transfer, then pictures hit the middle because they are larger but not too large.

Starting with the document transfers the Rocket 4 plus saw similar performance with both transferring the files to the drive and then back to the PC as well. The documents are always extremely demanding because of their small file size which can be seen with the low transfer speeds. This was similar to the Rocket Q4 but a little lower than some of the fastest drives I’ve seen in the past. 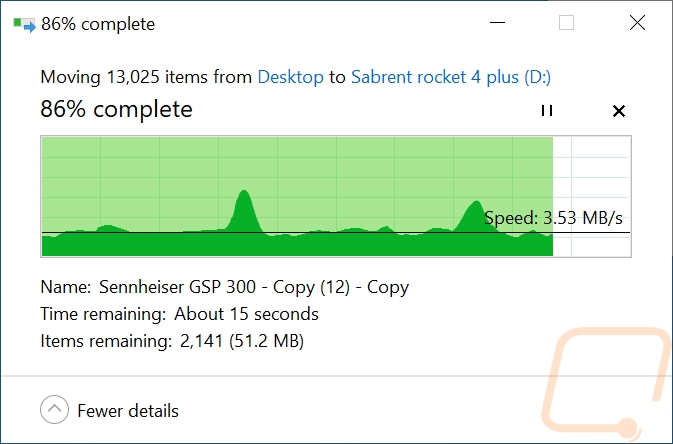 Documents to Rocket 4 Plus 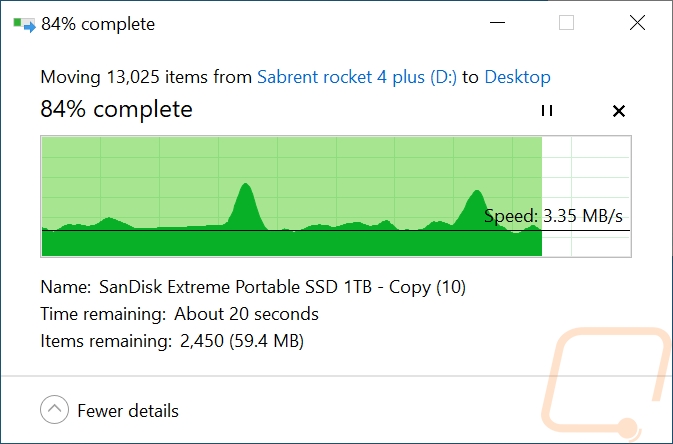 The photo transfers are closer to the middle ground when it comes to file size, not being as large as movies but we do see a big jump in performance because they aren’t tiny like the documents. Here the Rocket 4 Plus wrote to the drive at 774 MB/s and was even faster going back to the PC at 949 MB/s. Both were a good jump over the Rocket Q4. 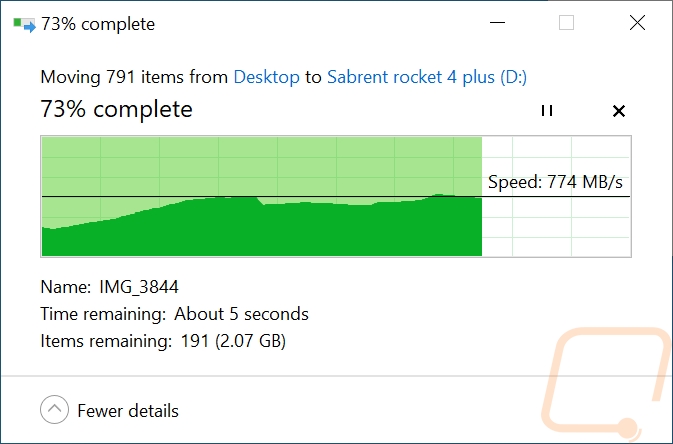 Pictures to Rocket 4 Plus 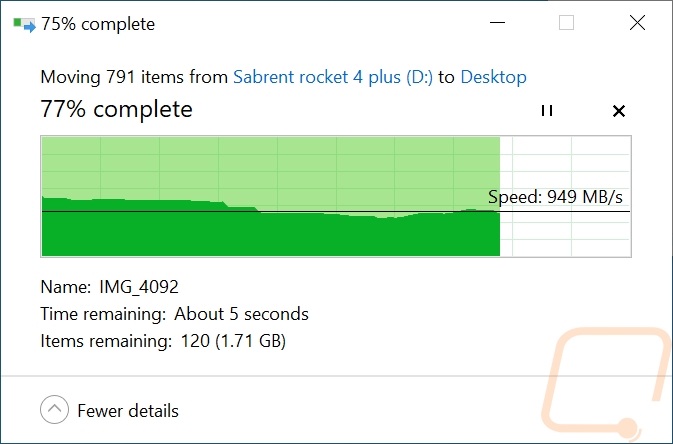 The last tests were using movie files which are huge single files that then focus on pure sequential transfer speeds. Here the Rocker 4 Plus excelled. Copying the files to the SSD reached speeds of 1.83 GB/s which is well above what I’ve seen on any of the other drives tested. Even the Rocket Q4 which also did well in this test only saw 1.48 GB/s to the SSD. Pulling the files back to the PC was a little slower at 1.36 GB/s but was still faster than the 1.19 GB/s of the Rocker Q4. 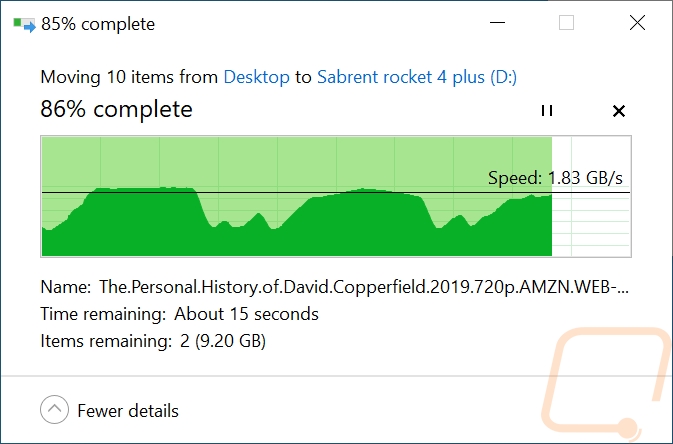 Movies to Rocket 4 Plus 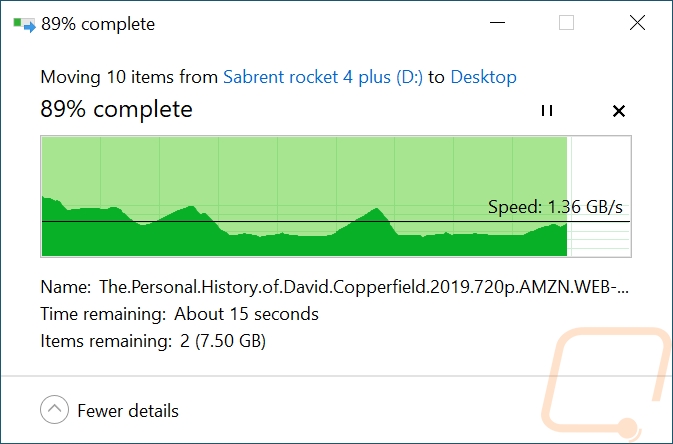 Before finishing up I did also let the Rocket 4 Plus get warmed up using AIDA64 and took a look at the drive using our thermal camera. Even without a large heatsink the Rocket 4 Plus doesn’t do too bad for heat. The controller end of the SSD does run warmer, but not by a large amount. 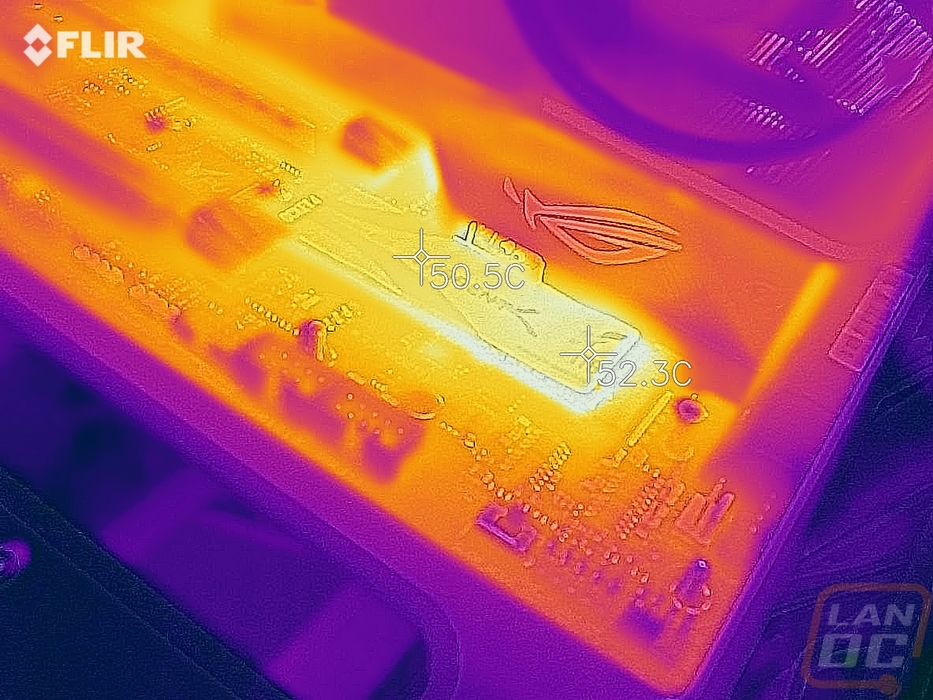