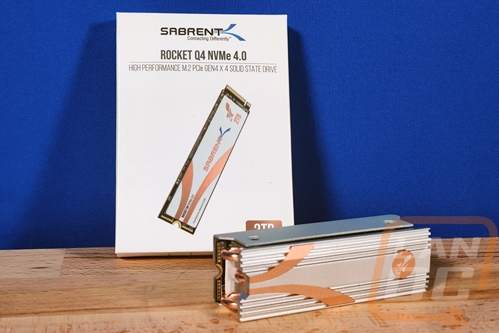 To check out the performance of the Sabrent Rocket Q4 I made sure that we were running at PCIe Gen 4 which our X570 platform supports by checking in CrystalDiskInfo. You can see we are running at 4.0 with x4 lanes which is what is needed. This also documents the firmware version that I tested on in case that changes in the future as well. 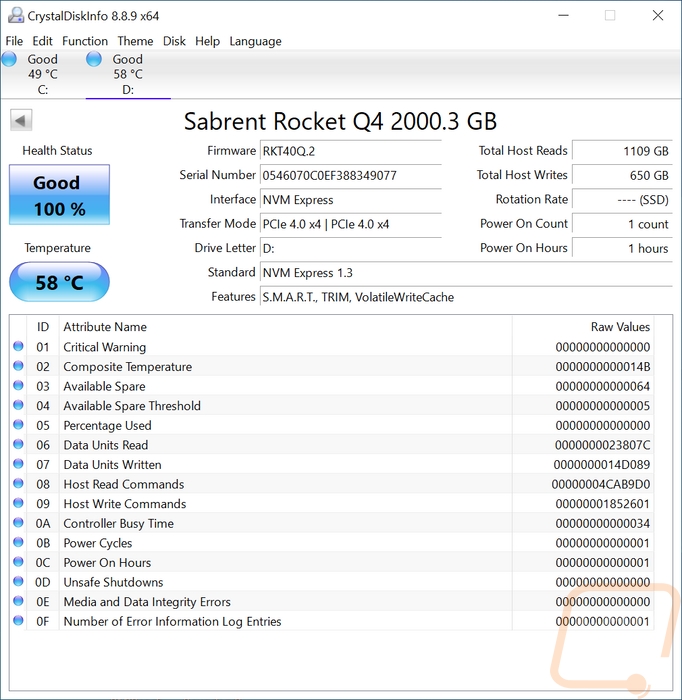 Then I was able to jump into testing, using CrystalDiskMark first. This is what a lot of people like to check out sequential performance which is going to show the fastest numbers. Sabrent has the Rocket Q4 listed with up to 4800 MB/s read and 3600 MB/s writes on their website so that is what I was looking to see if we would reach. Our drive did better than that with 4987 for the read speed and 3754 for the writes.

Also in CrystalDiskMark 7, I took a look at the random 4k IOPS when running at a queue depth of 32 and with 16 threads. This is extremely demanding and the Rocket Q4 did okay on the read side, at least sticking with the high-end PCIe 3.0 drives but it fell on its face with the writes. For comparison the original  Rocket Q is tested as well and did very well on its write IOPS so it isn’t the QLC NAND, it’s a limitation of the new controller.

Next, I ran two tests in PCMark 10 which is closer to a real-world benchmark. They run a series of office and home programs and give the drive an overall score by the performance. On the data drive benchmark, the Rocker Q4 did well but the full system benchmark result left a lot to be desired. 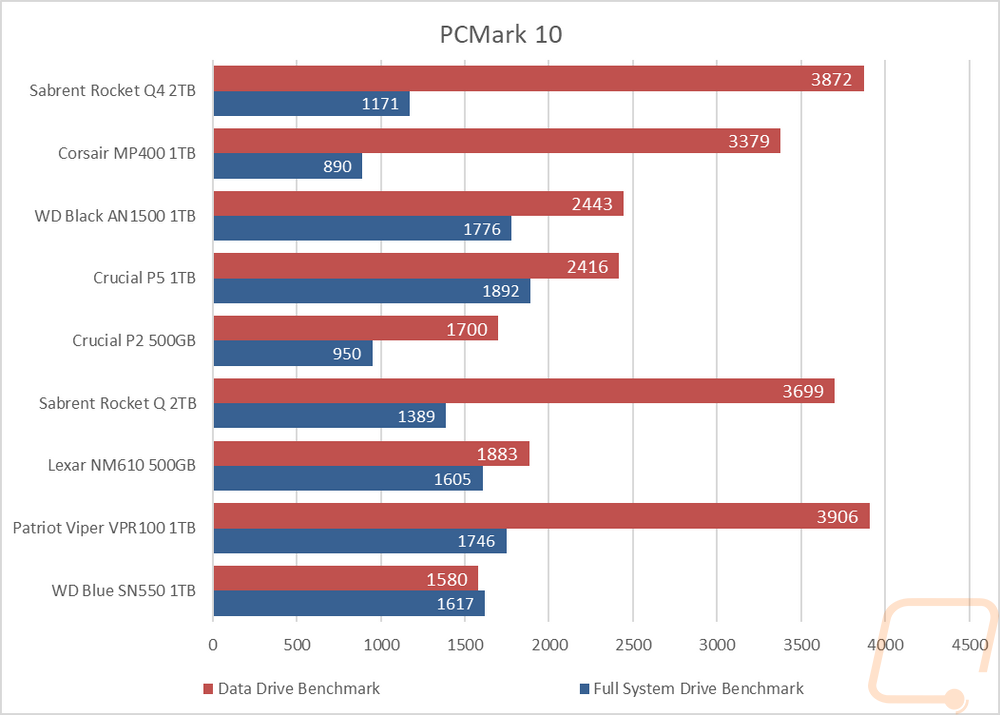 The next benchmark was using AS SSD which its base benchmark is very similar to CrystalDiskMark. I skipped that and use their timed file transfer test which transfers three file types to see how each performs. I stack all three together so we can see overall which drive has the best overall performance by seeing the shortest bar. The Rocket Q4 did well here, its ISO performance was good but not the lowest when you compare it with drives like the SN750. Its program file time was the best of all of the drives tested, making up the difference from the ISO and its game file transfer time is near the top as well. 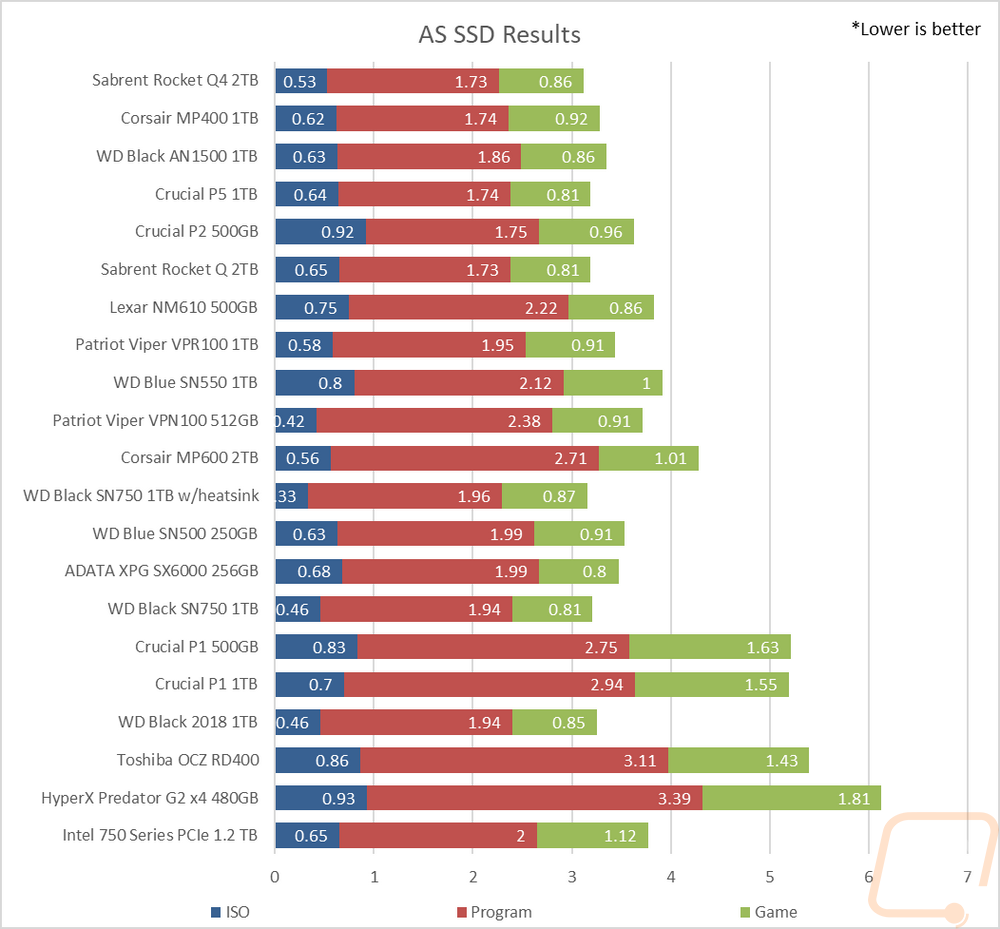 Next in Passmark, I ran a few different benchmarks. I ran the Passmark Performance Test 9.0 disk mark which runs a few synthetic benchmarks to create a score. The Rocket Q4 came in the middle of the pack here. Then I jumped into the advanced disk benchmark which has four default tests that look at enterprise situations. The Rocket Q4 didn’t stand out on any of the four tests, not failing at all but just coming in the middle of the pack. Just like the disk mark indicated. 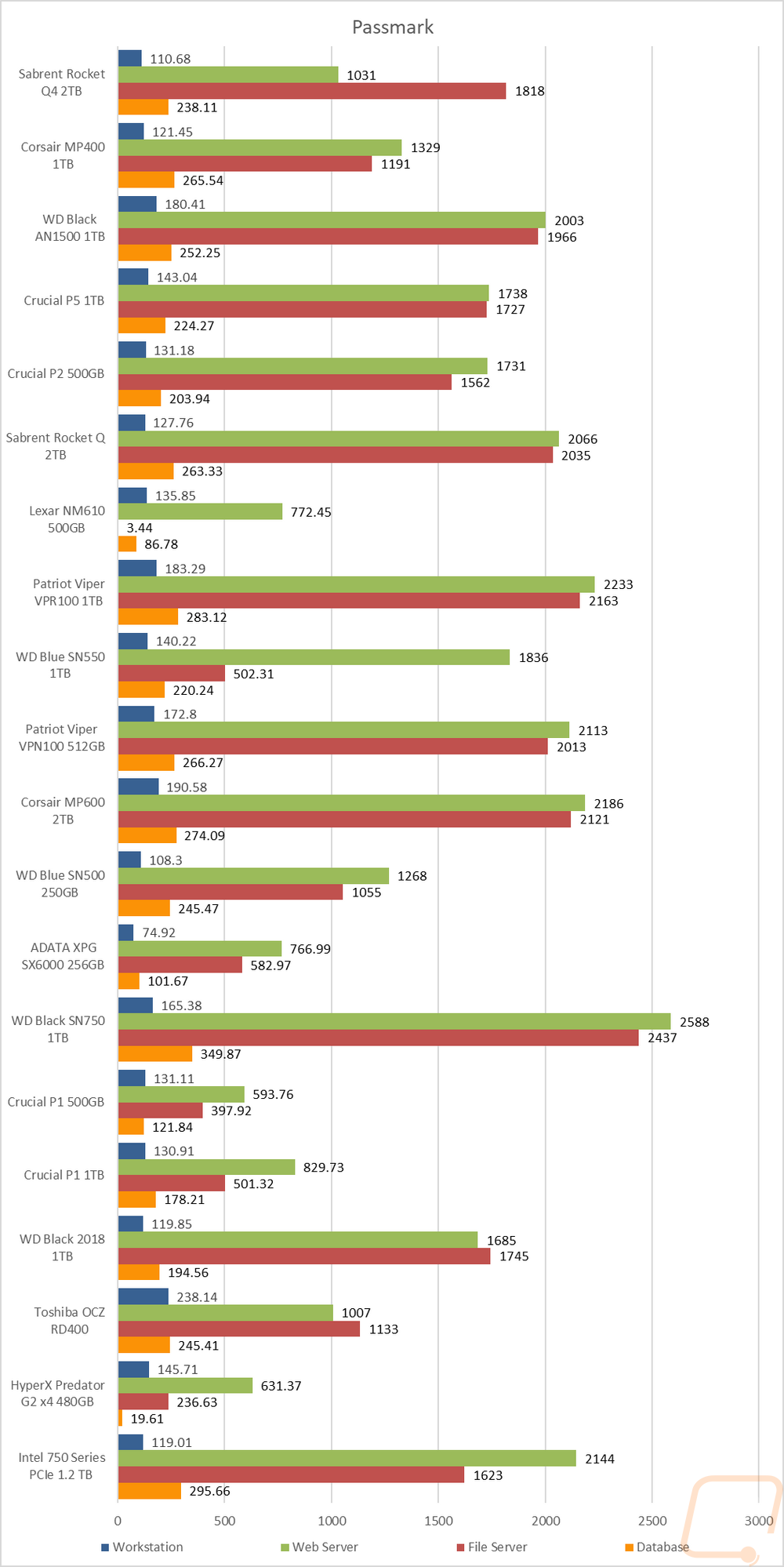 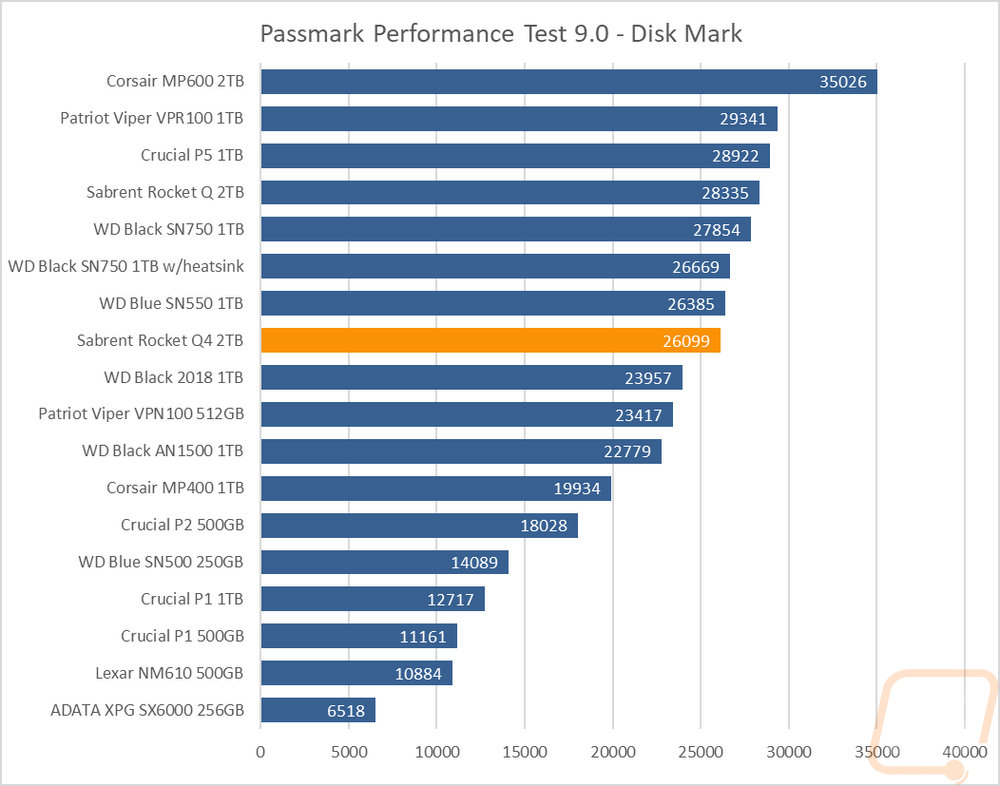 In Anvil’s Storage Utilities I jumped back into IOPS benchmarks. Here I take a look at a less demanding situation where we have just a queue depth of 16. Here the Rocket Q4 did extremely well. Its read IOPS at 174113 weren’t top of the pack but were solid. But the write IOPS were amazing. A huge difference from the previous IOPS test. 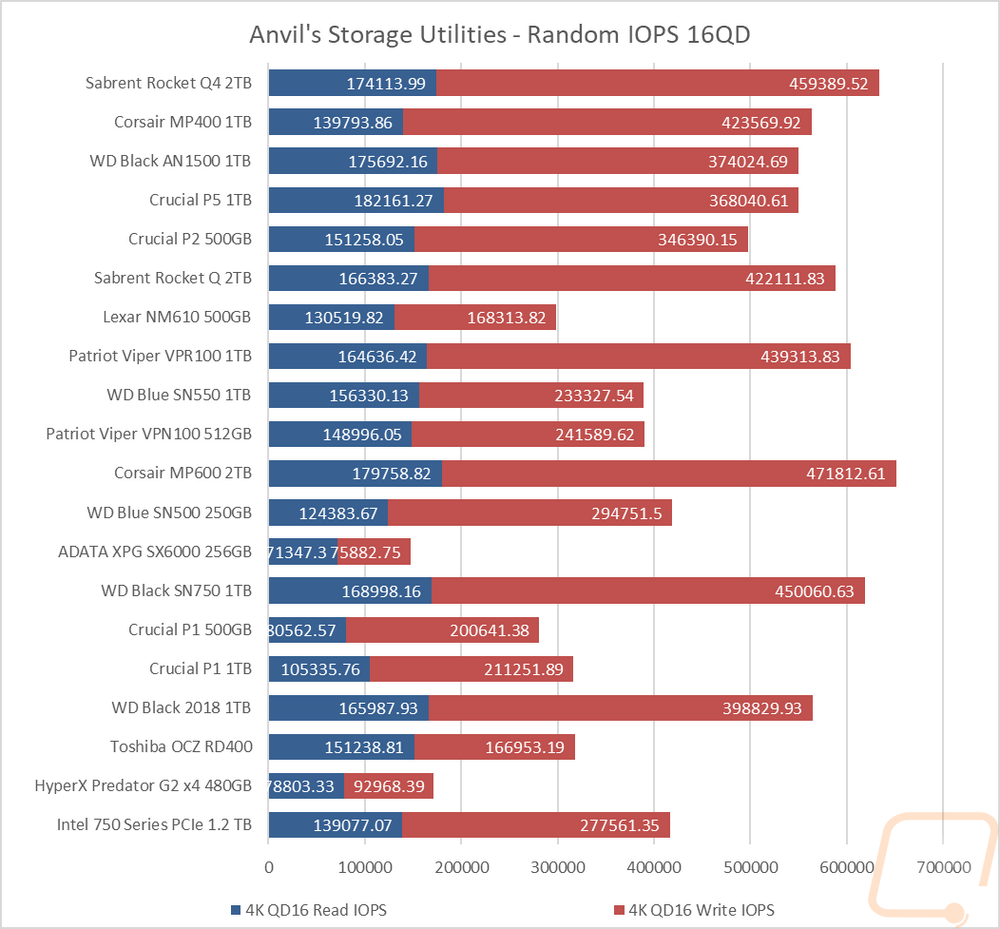 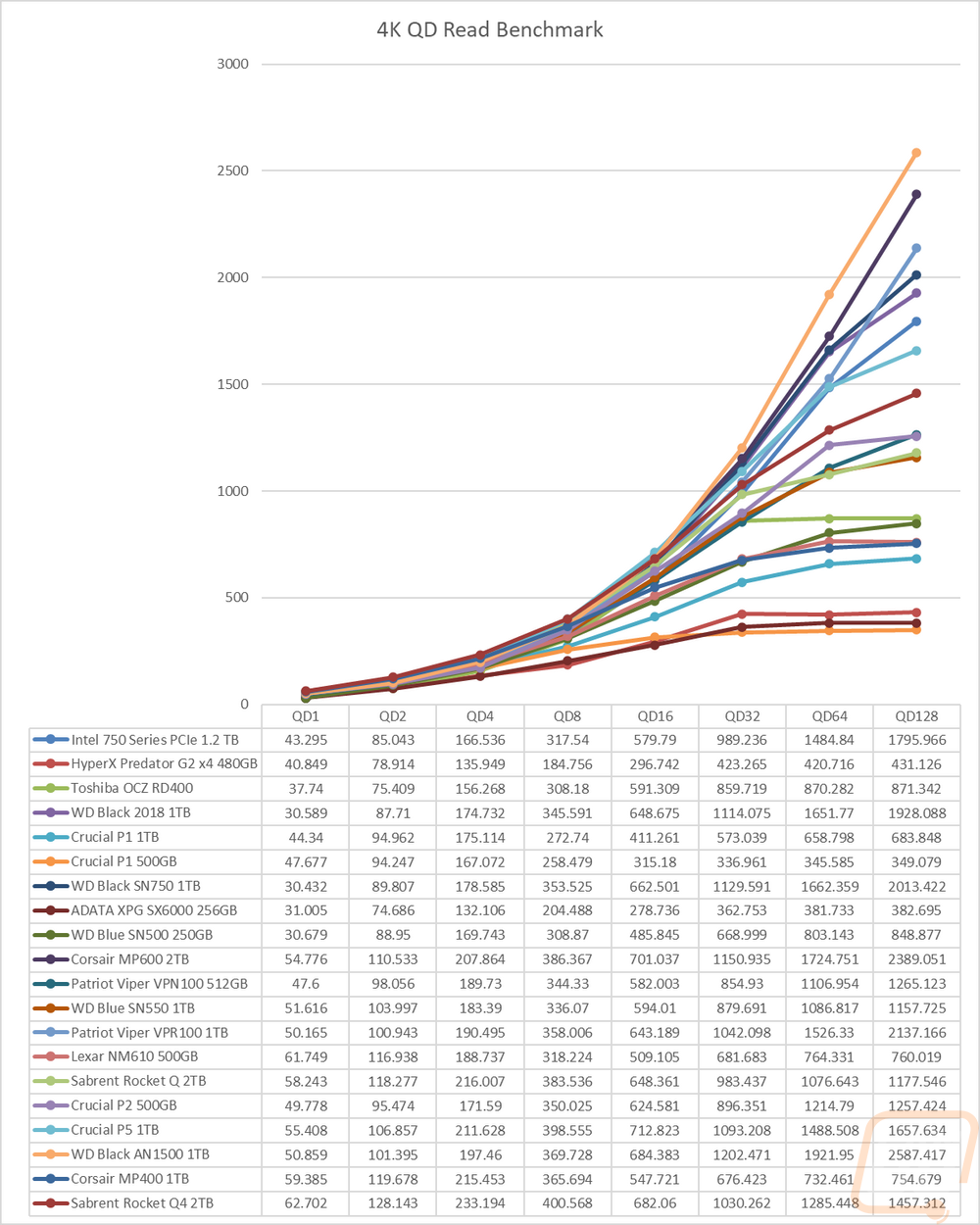 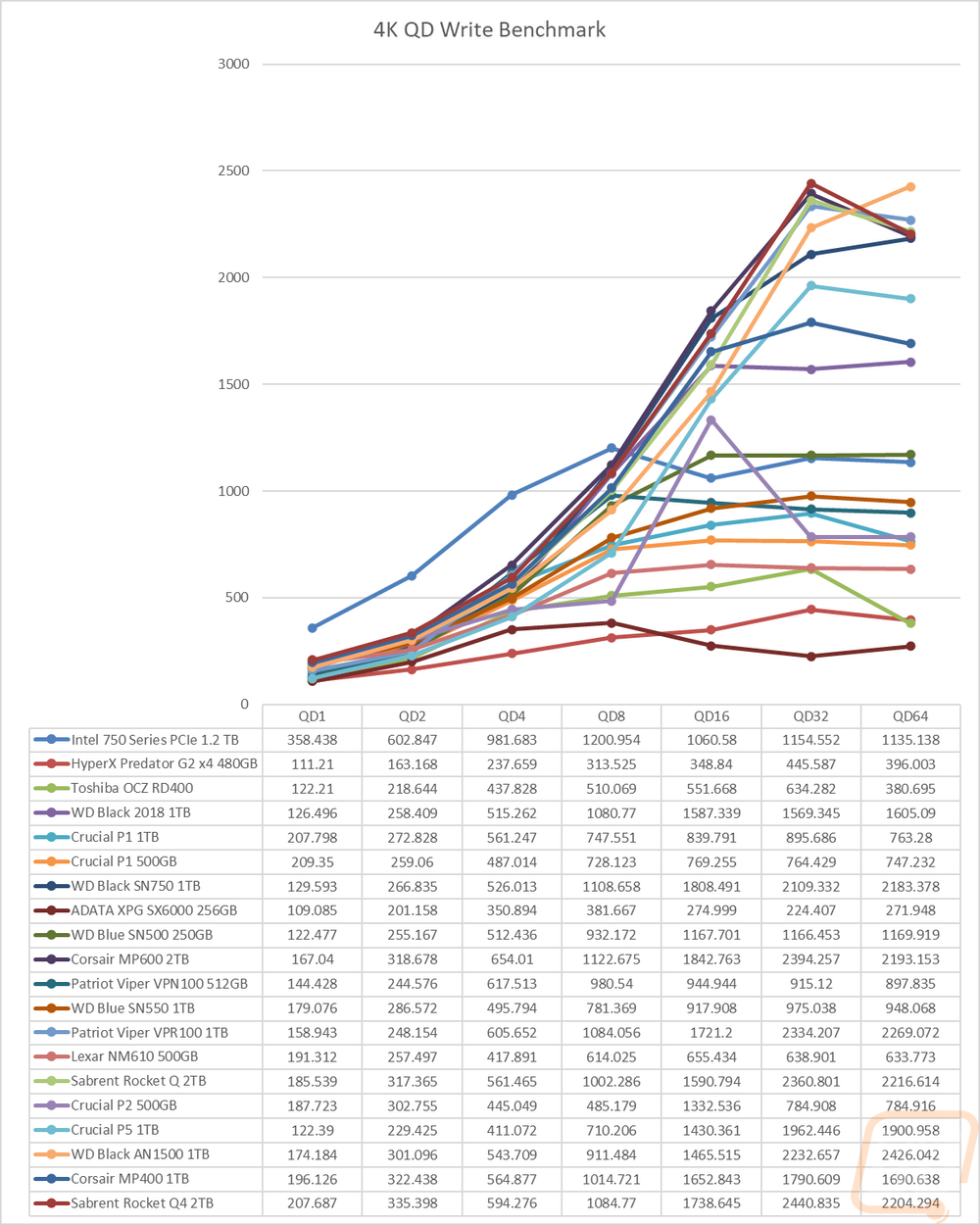 My favorite round of testing is still the actual real-world tests where I transfer files to and from the Rocket Q4. For this, I have three folders, one filled with large movie files, another with RAW and JPG pictures, and a third with word documents. The movie files are large and look at sequential performance and are most likely to transfer the fastest, word documents are on the other end of the spectrum as they are tiny and very slow to transfer, then pictures hit the middle because they are larger but not too large.

For the documents, the Rocker Q4 transferred the small files at 3.61 MB/s which is a touch slow but not far off from the 5 MB/s max that I sometimes see with the documents. Moving the files back to the PC was at nearly the same rate. 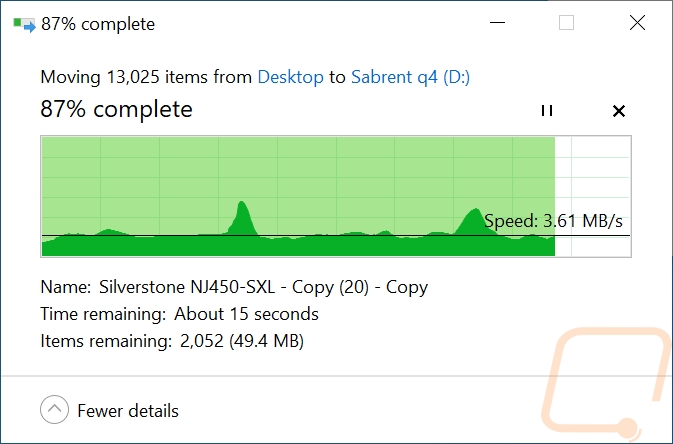 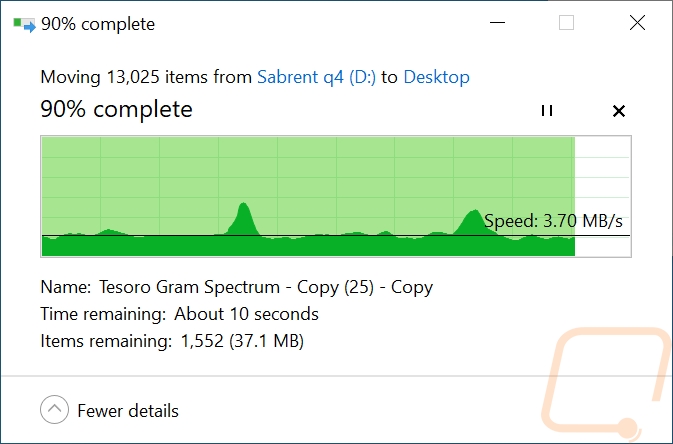 For the folder filled with RAW and JPG picture files the transfer rate was much faster. The Rocket Q4 took the files on at 685 MB/s. This is still far from the advertised sequential performance, but solid for what I normally see for these files. They transferred off the drive much faster at 901 MB/s which is impressive. 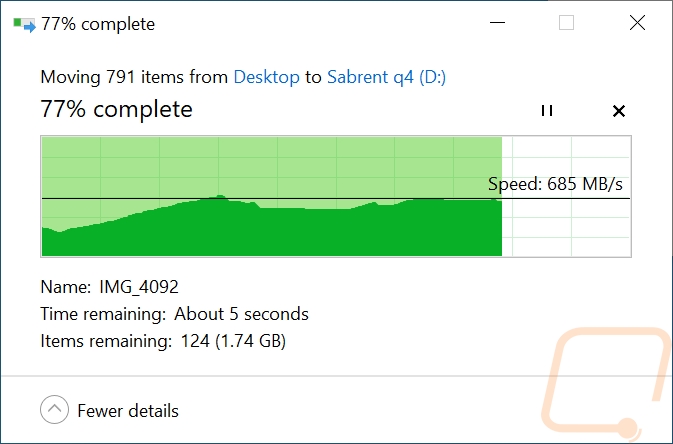 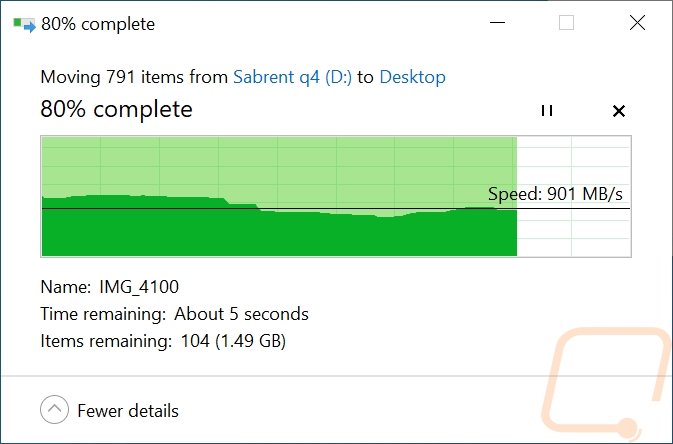 Then the last batch of files were the movies. These are large single files and get the best possible performance. Copying to the Rocket Q4 saw 1.49 GB/s and a consistent transfer rate. This was faster than the MP400 I just recently tested which is a PCIe Gen 3 device, but the performance gap wasn’t as large as you would hope. Copying the files back was slower at 1.19 GB/s and this was closer to twice as fast as that same MP400. 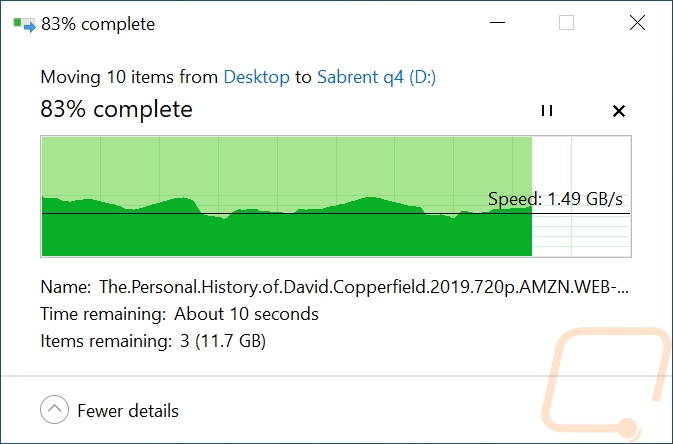 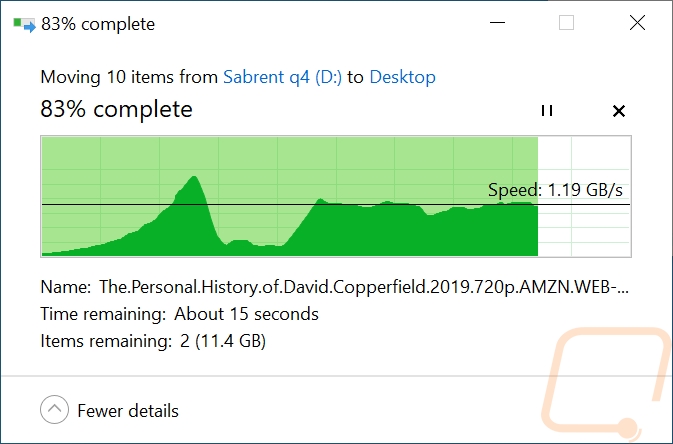 As for thermals, I played around with the included heatsink as well as the Rocket Q4 by itself. The heatsink did even out the cooling well, pulling the heat up and away from the M.2 drive. But the Rocket Q4 didn’t run hot enough to need the cooler all of the time either. I ran our normal thermal test which uses AIDA64’s disk benchmark on a linear read benchmark for a half hour. Near the end of that, the drive did have hot spots up in the mid-60c’s but not hot enough to be a concern. 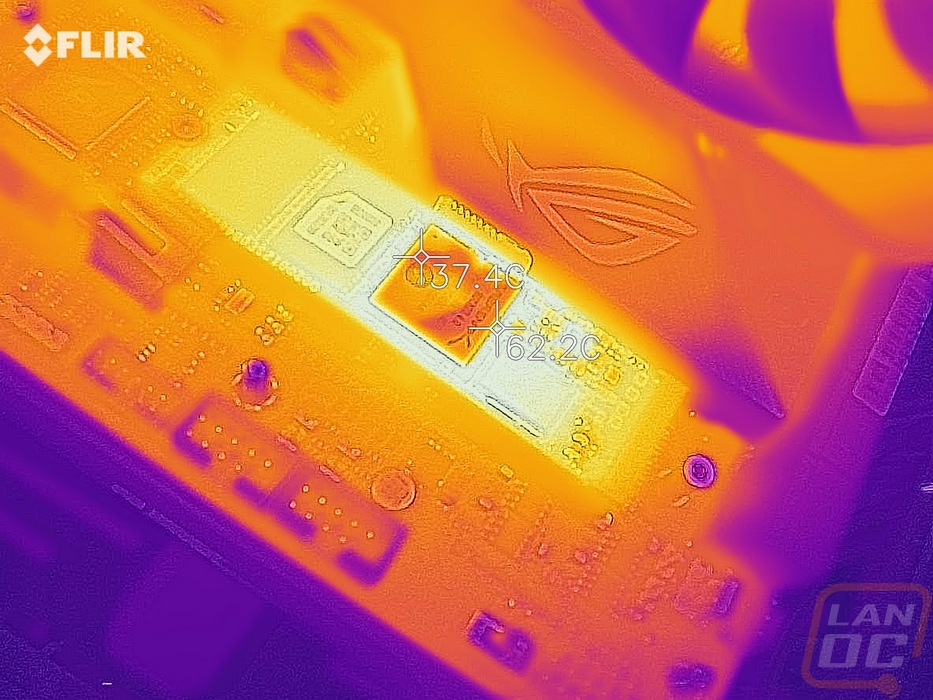