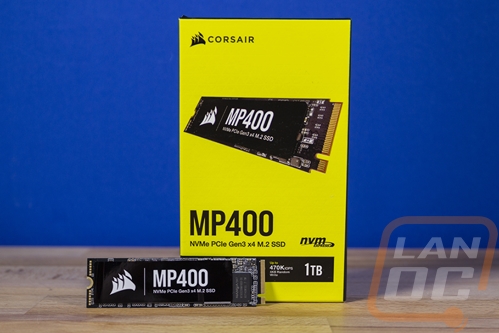 Before jumping into my testing I did run CystalDiskInfo, this was just to confirm that the MP400 was running at the correct speed. It is a PCIe 3.0 drive which is supported by new and old configurations so that wasn’t an issue. I was also running with x4 PCI lanes which is what it needs so we were good to go. The CrystalDiskInfo also documents the firmware and you can see it was running on the standard NVM 1.3 driver. 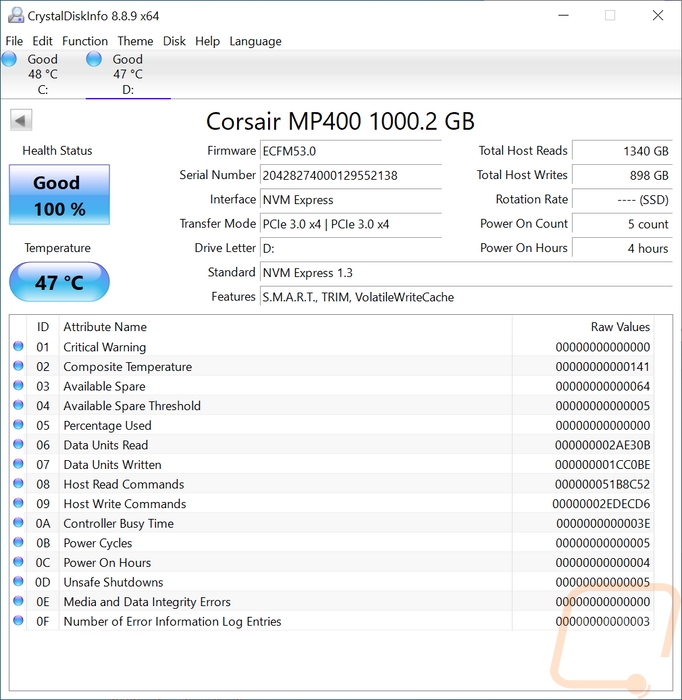 My first round of testing was using CrystalDiskMark 7. I’ve got the CDM7 results next to other NVMe drives. The Rocket Q which has the same controller and NAND but in the 2TB capacity was of interest as well. The MP400 1TB did well on the sequential read speed which being a PCIe 3 drive was maxed out at 3095 MB/s but you can see how much things drop off on the reads when you get down to the random 4k at a queue depth of 32 with 16 threads, being the second slowest drive tested there. The 2TB rocket Q was much faster there. The write performance of the MP400 drops off significantly for the sequential results. In fact, the 2070 MB/s is a little faster than Corsair's specifications suggest. This is exclusive to the 1TB model MP400, the higher capacities all take full advantage of the eight-channel controller and are faster on the writes which you can see where the Rocket Q 2TB maxes out PCIe 3. The Q32T16 results on the writs are better than the reads were at least which should mean decent write IOPS. The IOPs results so show that the MP400 1TB isn’t great in overall IOPs performance, but the writes are noticeably higher than on the reads. 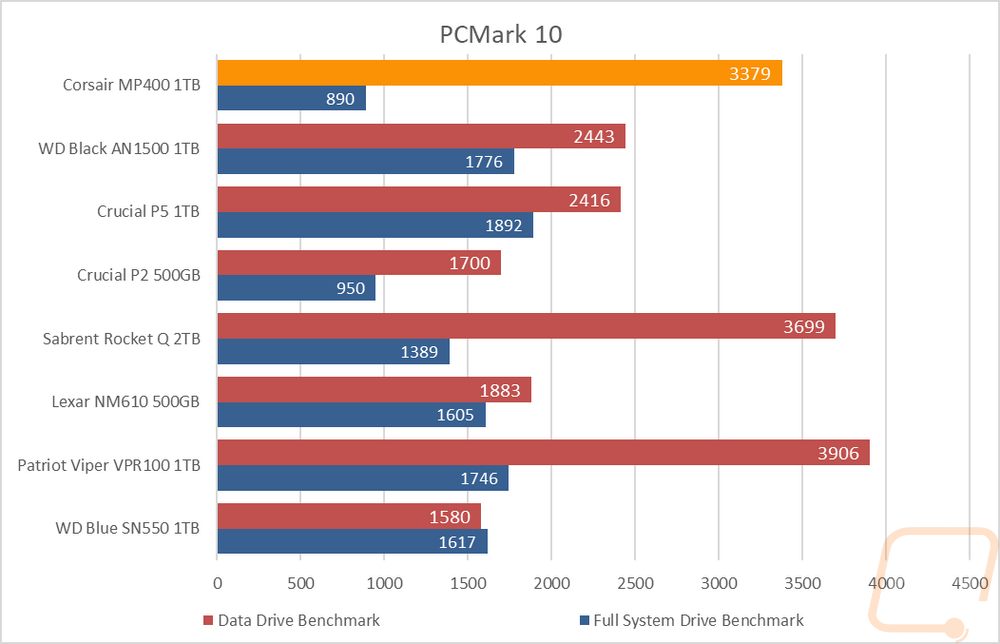 With AS SSD, I skipped doing the normal tests which are similar to CyrstalDiskMark, and went with their timed file transfer tests. This transfers three types of files with the lowest being the best. I stacked all three results together because I want to see which drives are the fastest overall. The MP400 didn’t do too bad with the program files with only the Rocket Q being faster, but the ISO and Game files put it behind, making its overall performance average. 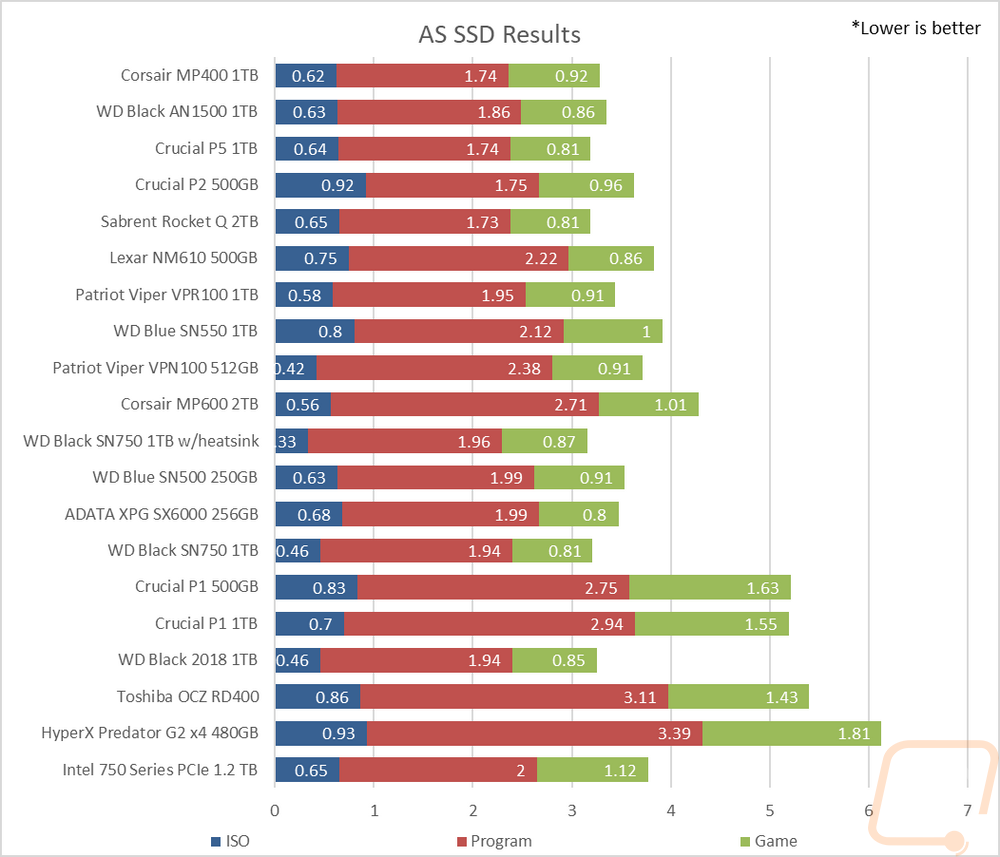 In Passmark Performance Test 9 I ran two sets of tests. I did the combined Passmark Storage Score which runs a few tests and averages out a score. Then I ran the advanced disk benchmarks which let us run a few default tests focused on potential enterprise performance. In the advanced disk benchmark the database result was the only area that the MP400 1TB stood out, the other three it came in behind other drives. Especially when compared to the Rocket Q 2TB. The Passmark Disk mark score showed the MP400 1TB ahead of a lot of the cheaper SSDs but all of the flagship drives, as well as the WD Blue SN550, were out ahead of it by a significant margin. 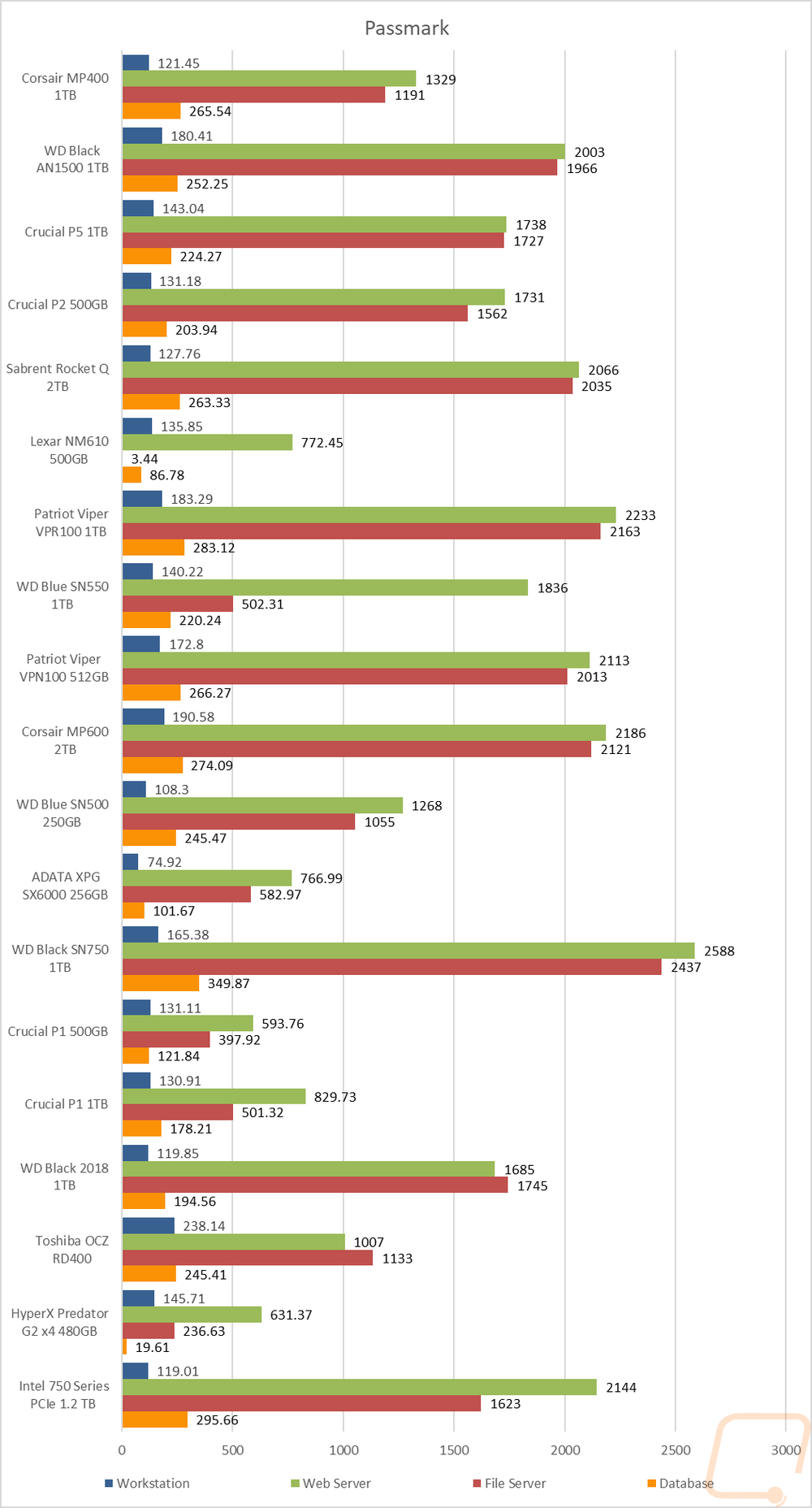 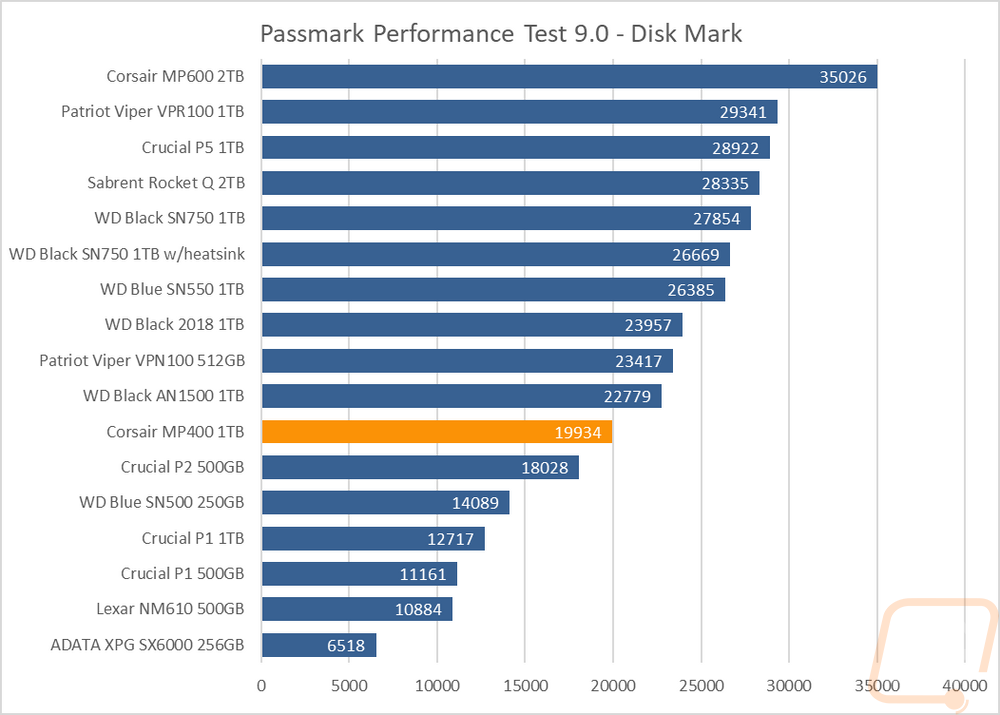 In Anvil’s Storage Utilities I ran the full test but focused on the IOPS performance at a queue depth of 16 for both read and write performance. The Corsair MP400 1TB didn’t do that bad here actually. This was mostly because of the write IOPS which were one of the fastest for PCIe Gen 3 drives. The read IOPS on the other hand weren’t as good. But combined it put the 1TB MP400 up ahead of the average. 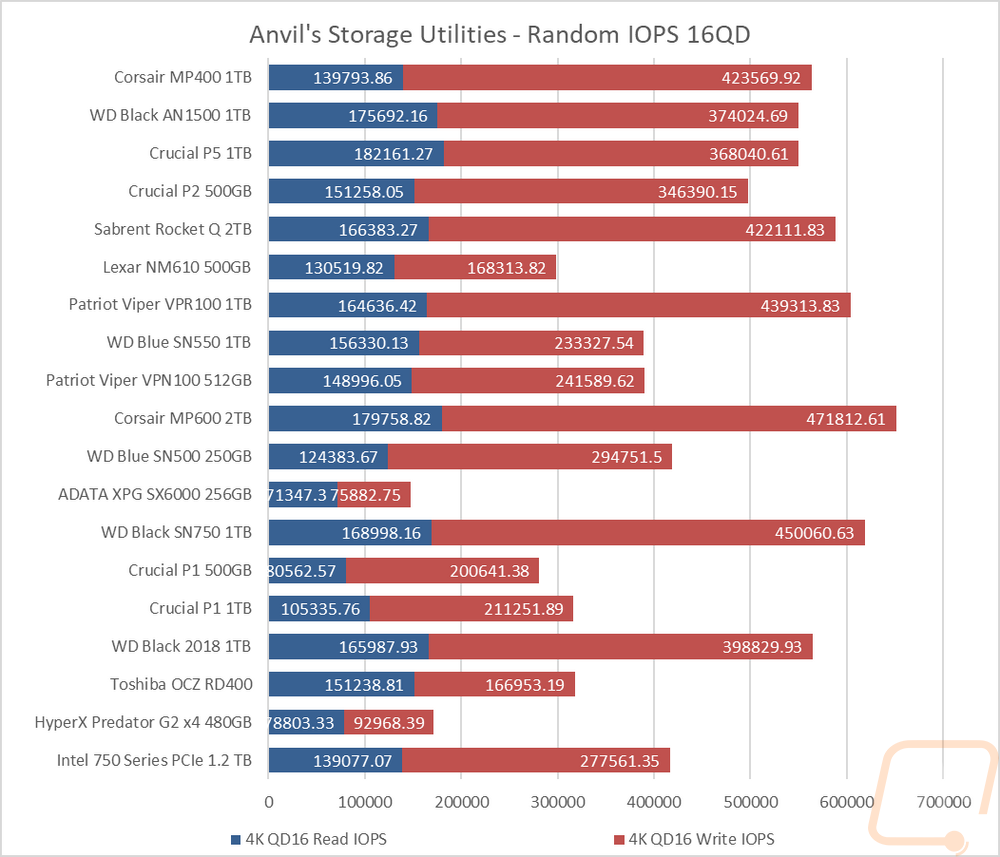 The second half of my Anvil’s Storage Utilities benchmarking was using the manual benchmarks to test out the 4K read and write performance across a variety of queue depths. I started at 1 queue depth and doubled up to 128 for reads and 64 for writes. This gives us a great hook at how the drive handles different situations, some controllers get overloaded and slow down in higher queue depth situations and some drives perform better than others when at low queue depths. The 1TB MP400 did well early but well off quickly on the read performance. You can see it fall behind at a queue depth of 16 then really behind on all of the tests after that. On the write tests, again the MP400 did well early but it didn’t drop off nearly as much on the higher end this time around. Up at a queue depth of 64, it did drop in performance 100MB/s from the 32 queue depth performance. The Rocket Q was still much faster and most likely an example of what the MP400 would do on the 2TB and larger capacities. 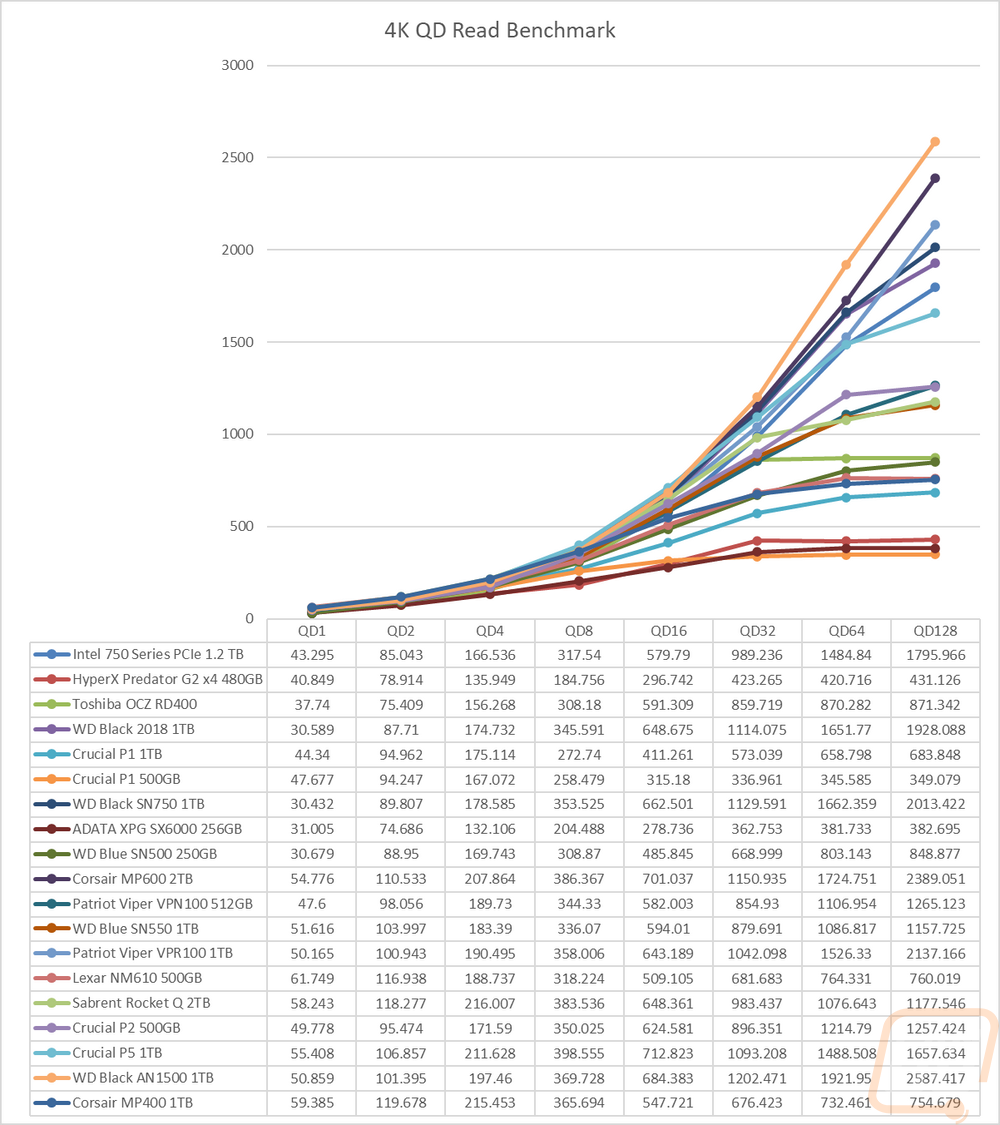 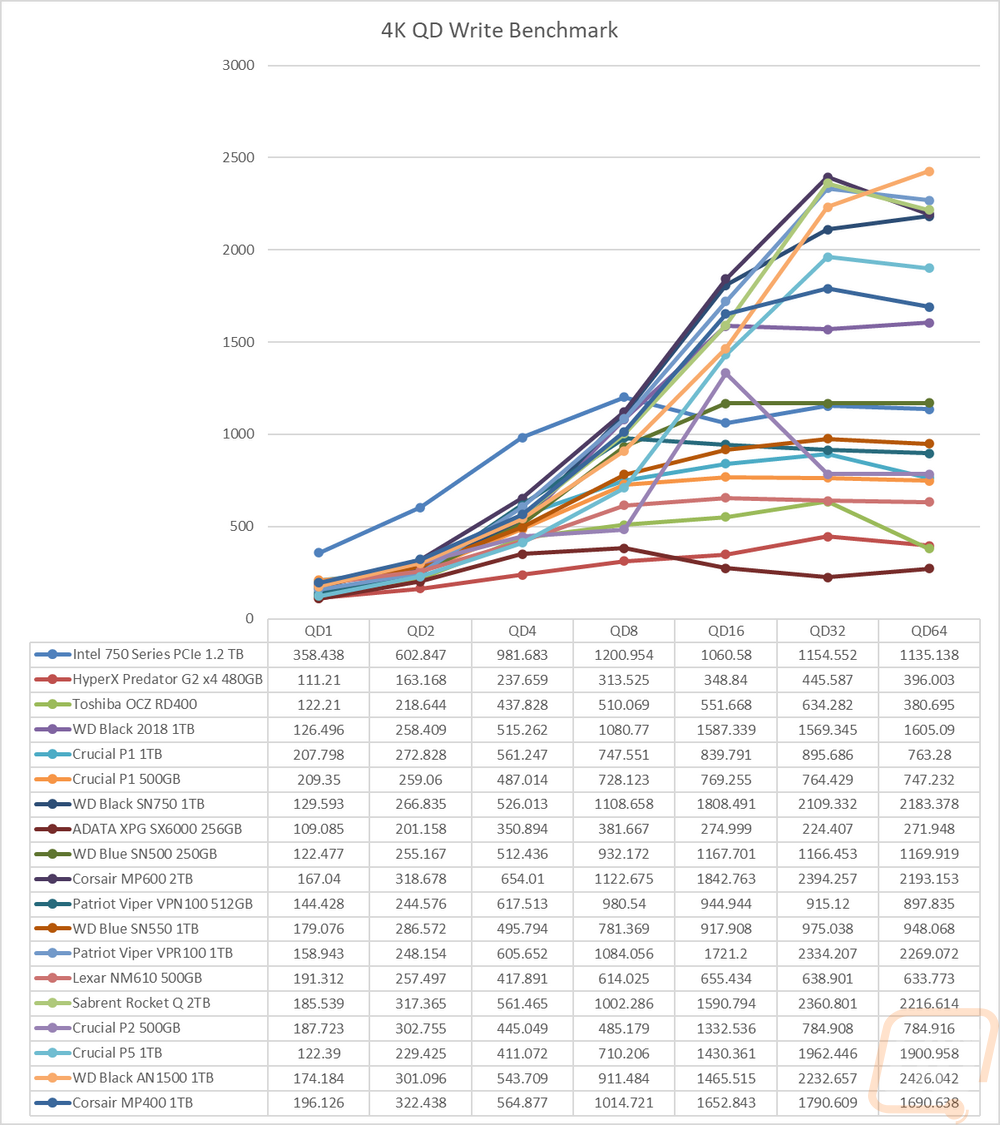 My favorite tests aren’t any of the normal benchmarks. I like seeing the real-world performance using windows file transfers. For this, I have three large folders filled with files. One has movie files which are all large files that are great for seeing sequential performance, the second has a mix of raw and jpg pictures which don’t have the same sequential as the movies but are what you will transfer the most. Then the last folder has word documents which are all small and slow to transfer. The 1TB MP400 came in around 3.4-3.6 MB/s both on the transfer to the drive and back to the PC. The picture folder was significantly faster with it transferring at 747MB/s to the MP400 and 772MB/s back to the PC which is great. But the movie files which are the easiest to transfer were even better, it was 1.3 GB/s to the drive and then 799MB/s back to the PC. 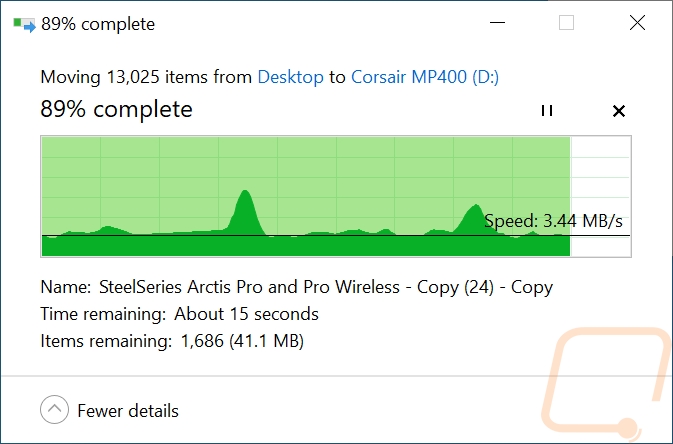 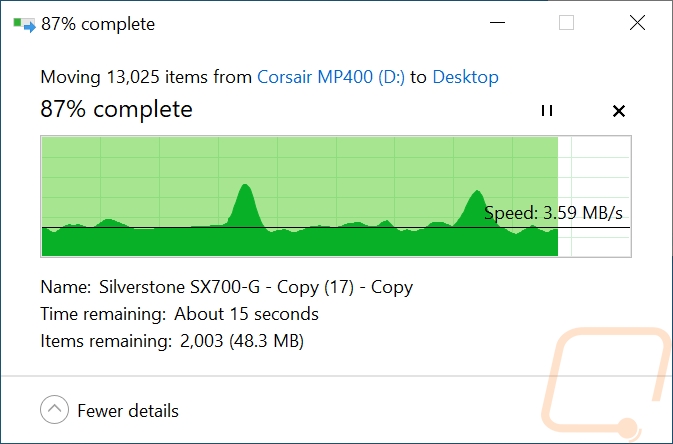 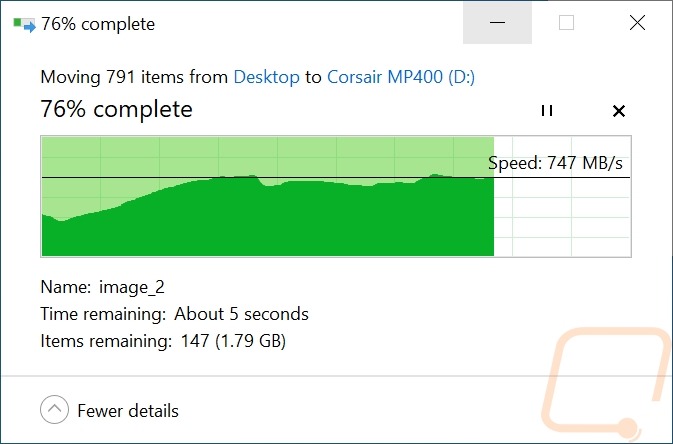 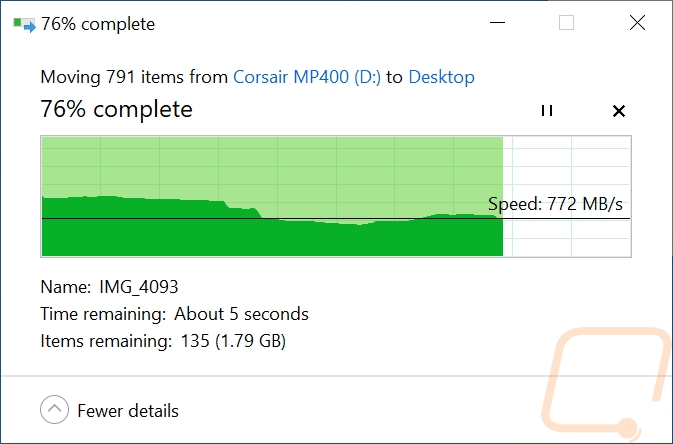 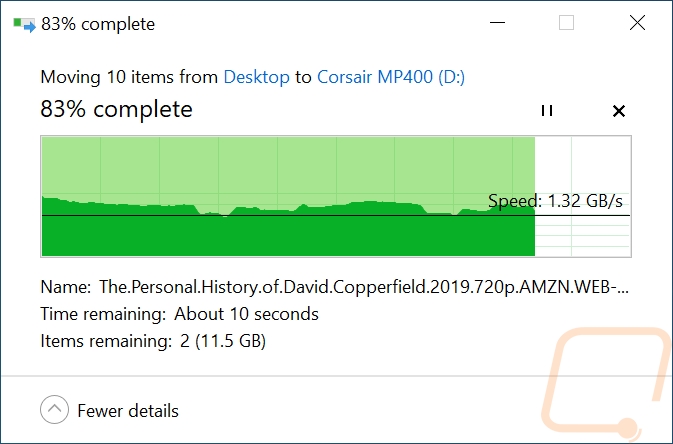 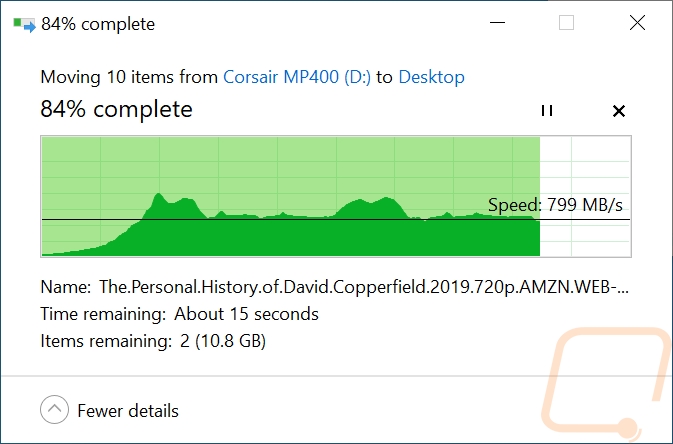 My last test was to take a look at the thermals. I warmed the drive up using AID64’s drive benchmark, run for nearly a half hour then used out Flir to check out the heat. You can see that the controller is the one hot spot. With it being packed between the NAND and the cache it does heat those up slightly but not enough to show much in the thermals. 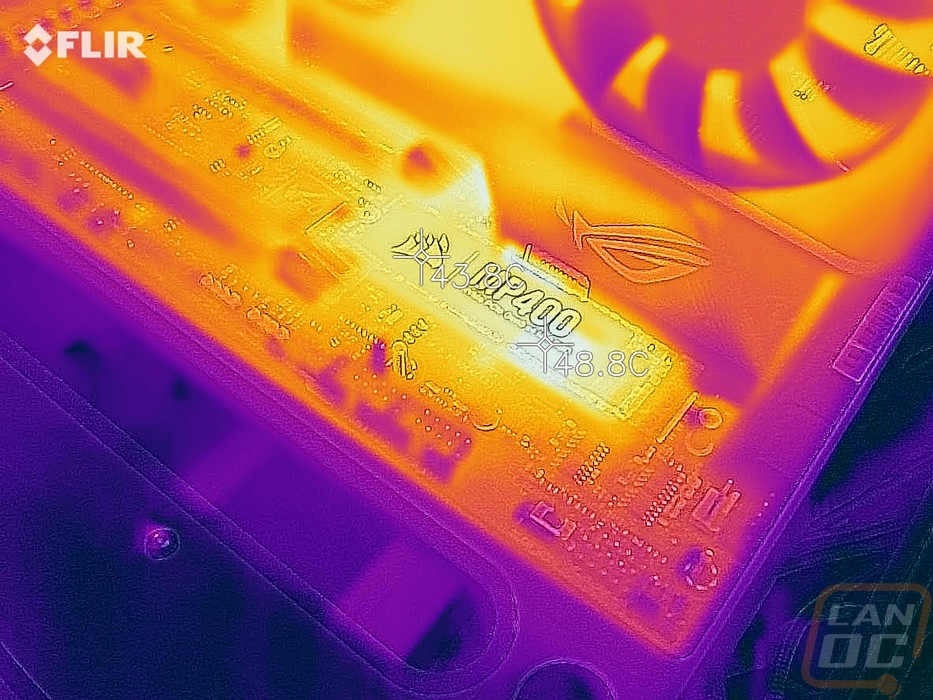 We have 2128 guests and one member online