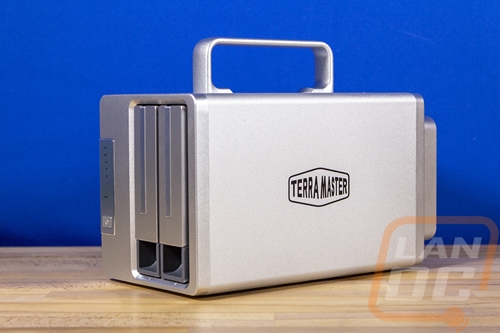 When looking around, there aren’t that many devices that set out to have the same functionality as the Terra Master TD2 Thunderbolt 3 Plus. The TD2 is at its core a Thunderbolt 3 dock which gets you a DisplayPort connection, two USB 3.0 plugs, and a wired 1GbE ethernet jack. There are a lot of options that provide that. But the TD2 also gives you a pass-through Thunderbolt 3 jack which can let you daisy chain or plug in another Thunderbolt device if you have one and that jack performed well in my testing with just a small amount of performance drop (2.7%). But along with all of that they have also paired it with a dual bay hard drive enclosure that can be run in RAID 1 or 0 if you like as well as JBOD and as single drives.

It’s the RAID 1 functionality that catches my eye because I know most people don’t think about data redundancy or protection so the idea of not having to even think about it here with your dock is perfect. You can backup to your dock when you get home and have two copies of your data there as well as the one on your laptop. The dock also passes through its charging to your laptop as well, which is important if you have an older laptop like I do which uses its one Thunderbolt port for charging and for data. The TD2 is designed with a handle on top which does mean you can take it with you when needed, but it isn’t really what I would consider to be portable as well given its size.

It isn’t perfect, I did run into some performance issues when running RAID0 in the 32 queue depth testing, though it was faster than a single drive in the other tests. That could have been an issue with me testing using SSDs to push the limits of the enclosure, it is possible that with two hard drives this wouldn’t be an issue. The fan isn’t as quiet as I would like it as well, not to mention that the design looks like they just added the fan as an afterthought. I also think that using a full-sized DisplayPort would be better, the Mini DisplayPort connection isn’t something that comes standard with monitors when they include cables, and because it is rarely used you may have to order it online. I also wouldn’t be against a few more USB ports, but I don’t have that down as a con because two is still enough. Especially when you most likely still have a few on your laptop as well.

Overall it is a solid device and certainly serves a very specific purpose. When looking around I did find a comparable device from OWC, the Mercury Elite Pro Dock. That dock will run you $279 which makes the 249.99 MSRP of the TD2 Thunderbolt3 Plus not too bad. You will still need to invest in hard drives, but it will save you a little over the competition. 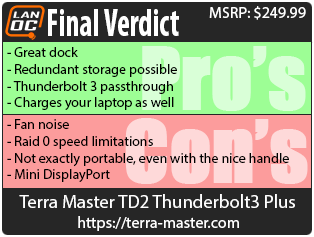 You might call him obsessed or just a hardcore geek. Wes's obsession with gaming hardware and gadgets isn't anything new, he could be found taking things apart even as a child. When not poking around in PC's he can be found playing League of Legends, Awesomenauts, or Civilization 5 or watching a wide variety of TV shows and Movies. A car guy at heart, the same things that draw him into tweaking cars apply when building good looking fast computers. If you are interested in writing for Wes here at LanOC you can reach out to him directly using our contact form.
Discuss this article
Log in to comment
Posts in discussion: Terra Master TD2 Thunderbolt3 Plus

We have 1912 guests and one member online