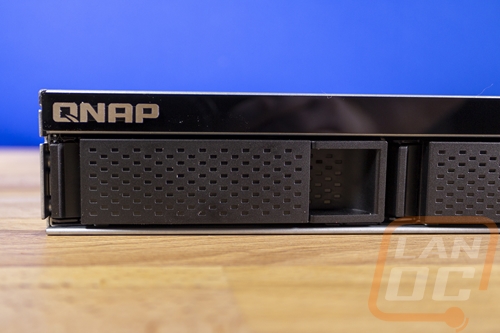 So the TS-453DU isn’t a monster all in one server like some of Qnaps higher-end SMB and enterprise NAS are. But not everyone needs all of that if you don’t need the processing power systems like that just mean more heat, more power usage, and more noise. The TS-453DU comes in with its Celeron J4125 which is a quad-core CPU running at 2.0 GHz with a burst speed of 2.7 GHz and it does exactly what it needs to do right. The J4125 has a TDP of just 10 watts which means it doesn’t need active cooling at all and the entire TS-453DU is expected to pull around 32 watts with hard drives spooled up or 17 watts when they are sleeping. That is comparable to running two 60 watt equivalent CFL light bulbs, remember when we all switches to those because of the power they saved! The kicker though is that the system can still handle all of the storage duties you can throw at it and run countless programs like Plex and all of the other programs that Qnap and others have developed. Seriously, once you start digging into some of the apps you have everything you need to take everything back off of the cloud for your privacy.

It’s all of those software options which include options for your PCs and on mobile phones as well that make the Qnap ecosystem so impressive. Most you could do on your own with a full server if you had the time and the knowledge. But they have made it all much simpler and in some cases plug and play. Bringing some of your storage back into your home network (especially if you follow proper redundancy and have an off-site backup solution) means you also aren’t limited by your internet speed to access the files and in most cases, you can store a lot more as well. I mean 18TB NAS focused hard drives are available, that is 72TB of storage or 54 if you are running redundancy. Even as a huge data hoarder, those are crazy numbers! Besides, you can even expand the TS-453DU If you want. Qnap has multiple rackmount and tower expansion options. The things I would do to add the TL-R1200S-RP into the mix! You could break a 1/4 Petabyte with those 18TB drives. The best part though is the dual 2.53GbE NICs that allow you to finally see improvements in file transfers after home/SMB networks seemingly being stuck at 1GbE for far too long.

Now the TS-453DU isn’t perfect, namely like I said you do end up with a lot of cool functionality like Dockers and VMs that aren’t going to be possible on the Celeron CPU. I also would love to see the memory options be a little larger. You get 4GB of RAM and you can double that to 8GB which is more than enough for typical NAS duty and running some of the apps like Plex. But I would love to at least have the option to overdo it, if for no other reason than to make me feel better or to have options later on when that ram is cheap(er). Speaking of pricing, with this being rack-mounted, you are going to want to mount it properly and to do that but their rail kit will run you $149 and that is only if you have a square hole rack. I was left unsure of what to use on our older round hole rack and ended up using a universal slider shelf. If anyone knows of a real sliding rail kit that works with the TS-453DU that is cheap please let me know.

As for the price of the NAS itself. All of the rack-mounted NAS options aren’t going to be cheap. The TS-453DU has an MSRP of $899 and is sometimes even more than that. Which it is its twin brother the TS-453D that makes the TS-453DU look so expensive. With the same drive capacity, same software, same CPU and memory, and even the same dual 2.5 GbE NICs it runs $400 less at $499. Now I can expect a premium, but that is a big jump in price to change the form factor. Which leads me to recommend the TS-453D unless you appositely need a rack-mounted NAS like I did. You can get all of the same features and performance at less than half the price once you add in buying rails. Though if Qnap included the rails with the TS-453DU, it would help swing that price down to a more reasonable amount. 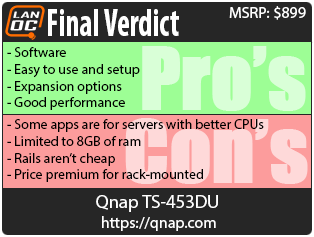 You might call him obsessed or just a hardcore geek. Wes's obsession with gaming hardware and gadgets isn't anything new, he could be found taking things apart even as a child. When not poking around in PC's he can be found playing League of Legends, Awesomenauts, or Civilization 5 or watching a wide variety of TV shows and Movies. A car guy at heart, the same things that draw him into tweaking cars apply when building good looking fast computers. If you are interested in writing for Wes here at LanOC you can reach out to him directly using our contact form.
Discuss this article
Log in to comment
Posts in discussion: Qnap TS-453DU