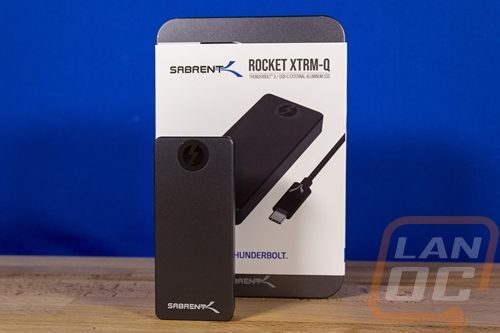 Well, Sabrent has continued to impress me by keeping things simple and having drives like the Rocket XTRM-Q that are just hard to find fault with. The drive is based on their Rocket Q M.2 SSD and the performance of that NVMe drive is great. When I tested that drive in their EC-TFNE enclosure the only problem was the limitations that USB itself have. So with the XTRM-Q that I tested today, having it be a Thunderbolt 3 supported drive makes a HUGE difference in performance. Initially, I wanted to put the limited availability of Thunderbolt 3 as a con, but while testing I realized that it is used often in laptops. On the PC it is a little slower to come around, especially with it only recently finally being available on AMD platforms. But as the performance numbers, today showed, it is a great way to see two or three times the performance over USB 3.2 Gen 2. Even when compared to USB 3.2 Gen 2x2 which I have also tested, it is faster and has a lot more availability.

The construction of the XTRM-Q is solid aluminum which is great for thermal transfer and you know that the drive would take a beating. The solid construction is also what I would expect from a high-end drive which this is. The other thing that Sabrent is doing with the XTRM-Q which they also do with their Rocket Q NVMe M.2 drive is offered it in huge drive capacities. The truth is, there aren’t a lot of options when it comes to NVMe externals. Especially with Thunderbolt 3. In fact, Newegg only has four drive options that are 2TB and larger with Thunderbolt 3, and two of those are Sabrent drives and not the newer Q variation. You can get this drive in 500GB and 1TB capacities, the 2TB size that I tested, and then 4TB and a whopping 8TB. At those sizes, you want/need the Thunderbolt 3 transfer speeds!

The only con I could come up with after using the Rocket XTRM-Q is that the price is still expensive when compared to normal 2TB external SSDs. Even if it is cheaper than other TB3 2TB drives, the MSRP is $449.99 and that is a lot to throw down. Thankfully, however, it is available on Amazon right now for $359.99 which is a big improvement and $150 less than any other comparable (and still slower) drive on Newegg. The 500GB is $169,  the 1TB is $219, the 4TB goes up to $829, and then that 8TB option will run you $1599. I’ve got and have had a lot of different external SSD options, but I have no doubt that the Rocket XTRM-Q is going to be the first drive I go to. Especially knowing my laptop supports Thunderbolt 3 as well. 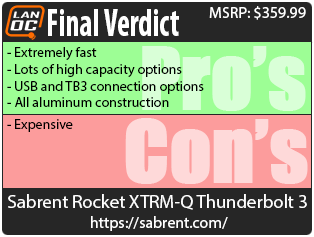 You might call him obsessed or just a hardcore geek. Wes's obsession with gaming hardware and gadgets isn't anything new, he could be found taking things apart even as a child. When not poking around in PC's he can be found playing League of Legends, Awesomenauts, or Civilization 5 or watching a wide variety of TV shows and Movies. A car guy at heart, the same things that draw him into tweaking cars apply when building good looking fast computers. If you are interested in writing for Wes here at LanOC you can reach out to him directly using our contact form.
Discuss this article
Log in to comment
Posts in discussion: Sabrent Rocket XTRM-Q Thunderbolt 3 2TB

miks replied the topic: #38798 26 Oct 2020 20:26
Hi, could you have the incredible kindness to unscrew the enclosure (I expect four screws under the two rubber pads on the bottom), and then see if the SSD inside is replacable? Thanks!
Read More...