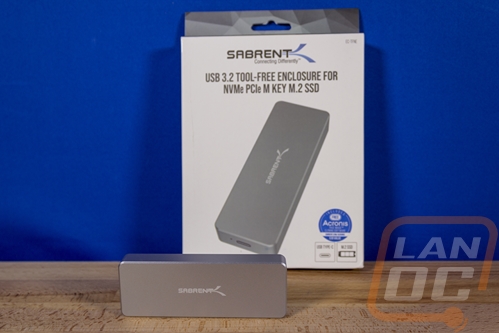 I didn’t come in with any expectations other than knowing what the Sabrent Rocket Q drive I was using inside of the EC-TFNE enclosure could do. I also knew that with this being a USB 3.2 Gen 2 drive, not a USB 3.2 Gen 2x2 I knew that we were limited to the 10 Gbps limit of a Gen 2 interface which is 1250 MB/s without any overhead. The performance that I saw fell right about where I expected it to be which was good. More importantly, the EC-TFNE impressed me in every other aspect. It is shockingly heavy duty in construction, it feels like you are carrying around a block of aluminum. Sabrent also didn’t try to gussy up the styling in any way, keeping it simple with the aluminum casing and just their logo printed up on top. The Tool-less design is also a lot easier than I thought it could be with just a latch to open everything up and an adjustable magnet to help support drives of different lengths.

What really helps set the EC-TFNE apart from just buying one of the many portable SSDs is the fact you can pick out your own M.2 drive. This means on a rebuild if you upgrade you can use this enclosure to give new life to a drive that you might sell for a lot less than you originally paid for it. You also aren’t limited by capacity in the same way as premade portable SSDs are. I used the 2TB Rocket Q but if you wanted you could get the 8TB Rocket Q or any other drive and used it. You can also use this flexibility to upgrade the enclosure again in the future if your drive isn’t large enough for you or if for some reason it fails.

Now there are a few downsides as well. The biggest I ran into was some slowdown in writes when doing the AIDA64 extended testing. I keep calling the enclosure by its model name, the EC-TFNE. But the name listed on the packaging was extremely long and while informative hard to remember and tell someone if you wanted to recommend it to a friend. The other downside comes down to pricing. Frankly, the enclosure price of $44.98 isn’t that bad considering its construction. It is only when you add in a drive then start comparing with premade external SSDs that those often end up being cheaper. They aren’t built as well also, so keep that in mind. But you do pay a bit of a premium for the flexibility that the EC-TFNE offers. In other words, do I like it. Yes. But if cost is a concern there are going to be cheaper options (even from Sabrent) if you give up the option to change out the drive. 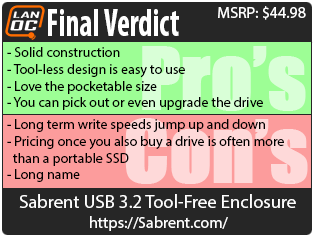 You might call him obsessed or just a hardcore geek. Wes's obsession with gaming hardware and gadgets isn't anything new, he could be found taking things apart even as a child. When not poking around in PC's he can be found playing League of Legends, Awesomenauts, or Civilization 5 or watching a wide variety of TV shows and Movies. A car guy at heart, the same things that draw him into tweaking cars apply when building good looking fast computers. If you are interested in writing for Wes here at LanOC you can reach out to him directly using our contact form.
Discuss this article
Log in to comment
Posts in discussion: Sabrent USB 3.2 Tool-Free Enclosure EC-TFNE

We have 1862 guests and one member online