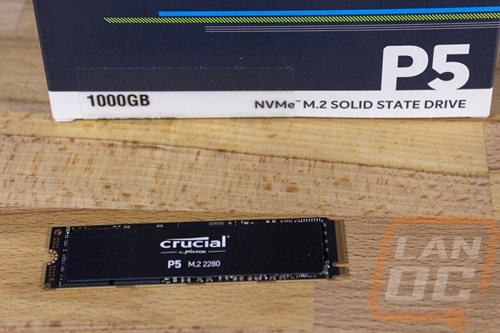 In addition to the P2 which I recently reviewed Crucial announced alongside the P2 their new P5. The P5 is a little different than there P1 and P2 because it is focused more on the higher end of the market. Which is exciting, up until now Crucial’s only NVMe SSDs have been those budget-minded models. Now, this is a PCIe 3.0 drive and they are a little late to that game. But it does have an in house Micron controller. Well, today I’m going to check out the new P5 and see what it’s all about, how it performs, and where it fits in the market as well. So let’s dive in!

The packaging for the P5 is exactly the same as the P2 and the P1 before it. Dark blue background with the strips above the name. Down on the bottom edge in the white, they point out that this is an NVMe M.2 drive and a sticker over the white shows the capacity. Up top, the Crucial branding includes a lighter blue ribbon as usual as well. Around back there isn’t too much going on other than a small window that lets you confirm the drive size and the serial number of the drive inside.

Inside the drive comes protected in a clear plastic clamshell tray and with it, they tucked in a user guide.

Unlike the P2, the P5 does have a little better color scheme. Being more of a high-end drive they dropped the blue and white for the sticker and went with an all-black sticker. The Crucial logo is right in the middle and below that the P5 model name. Combined with the black PCB, it’s a good look. There isn’t a crazy heatsink. 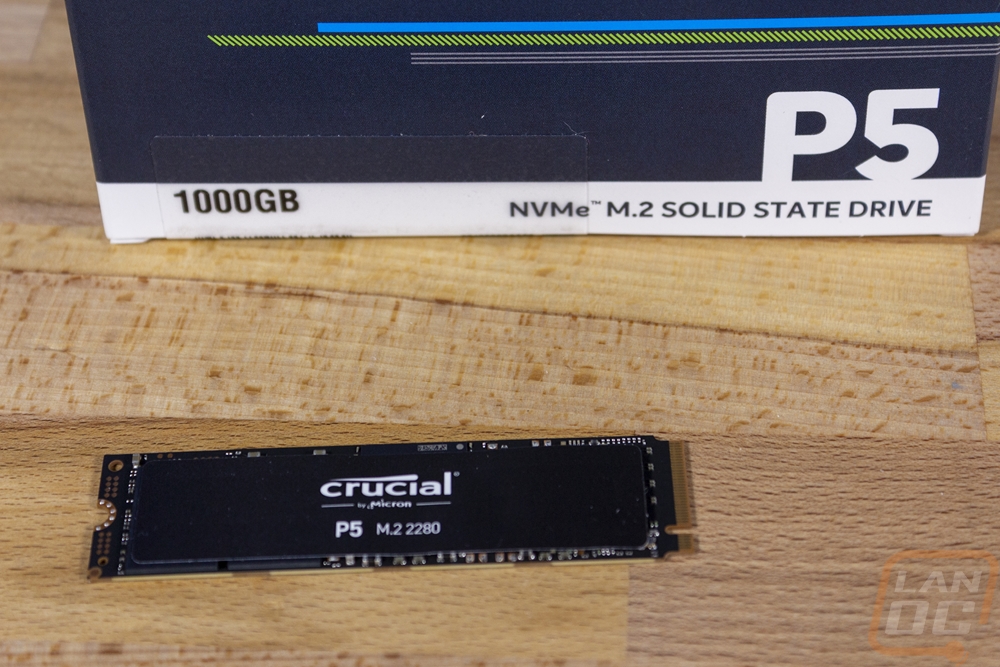 On the back, you can see a lot of the black PCB and then a smaller black sticker that has all of the important information. This includes the P5 and the capacity. Then all of the required certification logos and serial number.

To see what the P5 has going on, I pulled the sticker off so we could get a better look at the components. With Crucial being a Micron brand it isn’t a big surprise that everything is made in house and has the Micron branding on it. There are two NAND 9XC22 NW969 chips which are 512Gb each for the 1TB of our drive. This is Microns 96 layer TLC NAMD. The p5 stands out from the P5 because it isn’t a DRAM-less design. It has a Micron 9ZD77 D9ZCM which is an LPDDR4 chip. Our 1TB drive has a 1GB DRAM chip, the 250GB and 500GB models get 512MB and the 2TB drive uses 2GB. Then over on the right, the silver chip is the new Micron DM01B2 controller.

Alright, before testing the P5 I did run Crystal Disk Info just to confirm that our drive was running in PCIe 3.0 and at x4. But I also include this to show the firmware revision for in the future just in case things change. 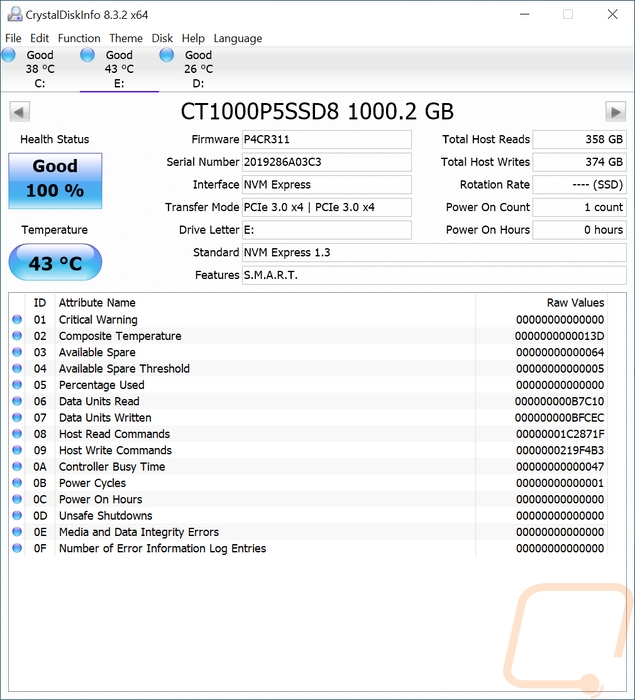 I started my testing off with the new Crystal Disk Mark 7 with both their read and write tests. I am mostly just looking at the sequential results here. Crucial advertises the P5 as reaching up-to 3400 MB/s for read speeds and 3000 MB/s for writes so I was curious how close it came. The read speeds were 3271 which aren’t bad at all, a little under the 3400 but still with just one drive in that list that was faster. The write speeds on the other hand were great, a hair above what they promised and right with the two other fast drives.

I did also run the Crucial P5 through the older CrystalDiskMark 6 as well which has been in our test suite for a lot longer. This is great because it lets us compare it with more drives, especially the WD Black SN750’s as well as the PCIe 4.0 based Corsair MP600 which helps see what PCIe 4.0 opens up for bandwidth. In the read speed test, again I saw 3251 MB/s which is 150 lower than the advertised “up-to” speed but it did put it above the VPN100 and around 175 MB/s less than all of the WD Black drives new and old. The MP600 is in its own class of course for this one with it being PCIe 4.0. As for write speeds in the sequential test the P5 was right with the CDM7 results with a 3029 which was faster than the WD Blacks by just a hair and right with the Sabrent Rocket Q that I just recently tested as well. 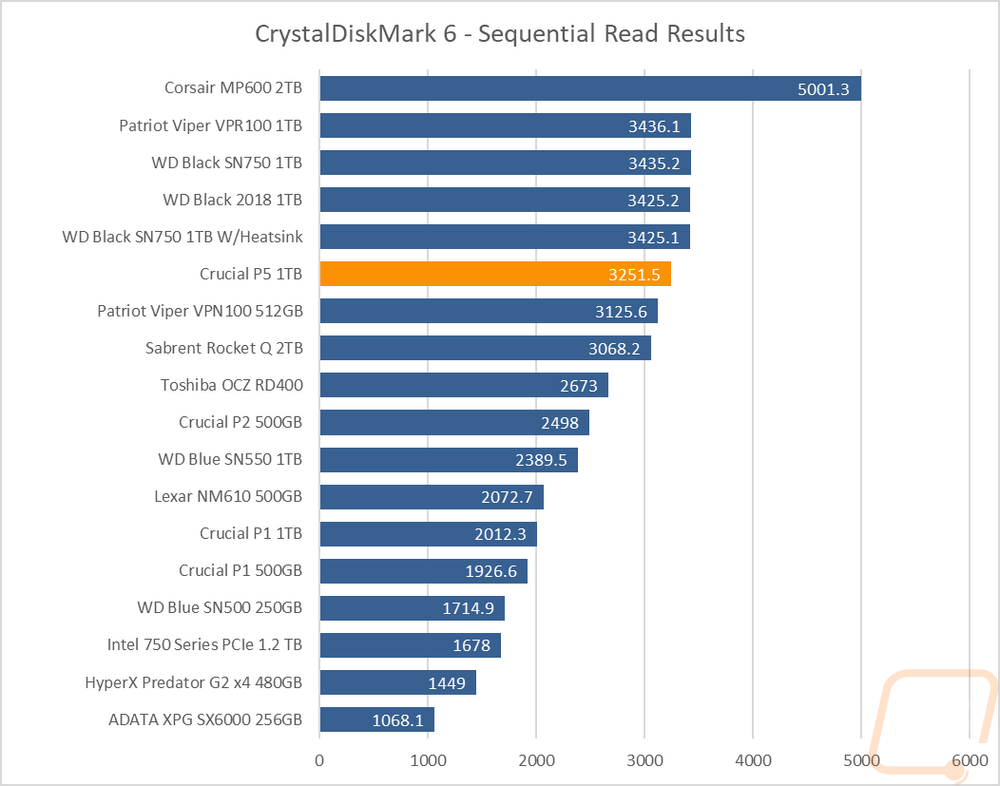 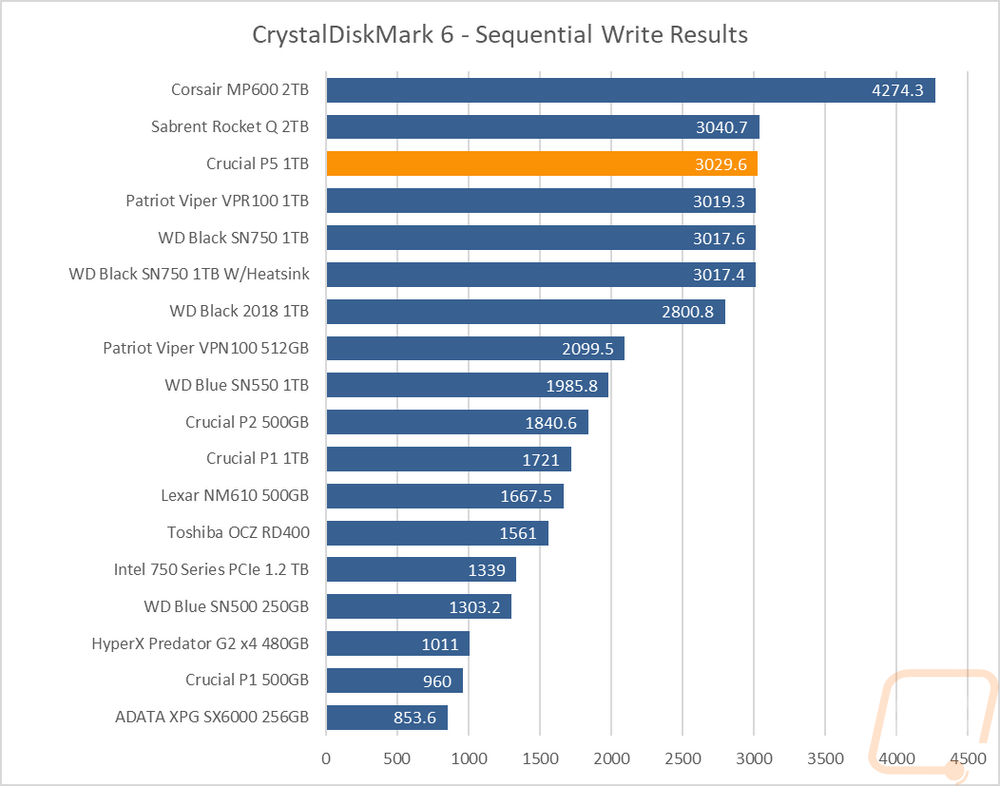 While doing the CrystalDiskMark 6 test I did also take a look at the Random IOPS in both of the 8 queue depth and 8 thread results. I stacked both read and writes together because in the end it is important to have both and you can see that the P5 was right up with the top drives though a hair below the top 4. This was because of the read IOPS, the write IOPS were in the top three. 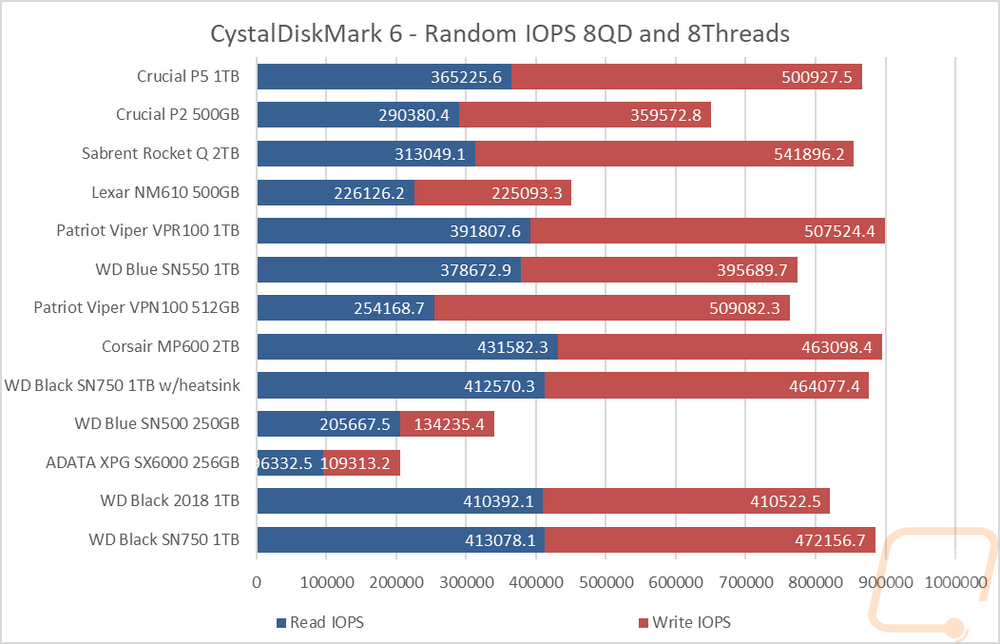 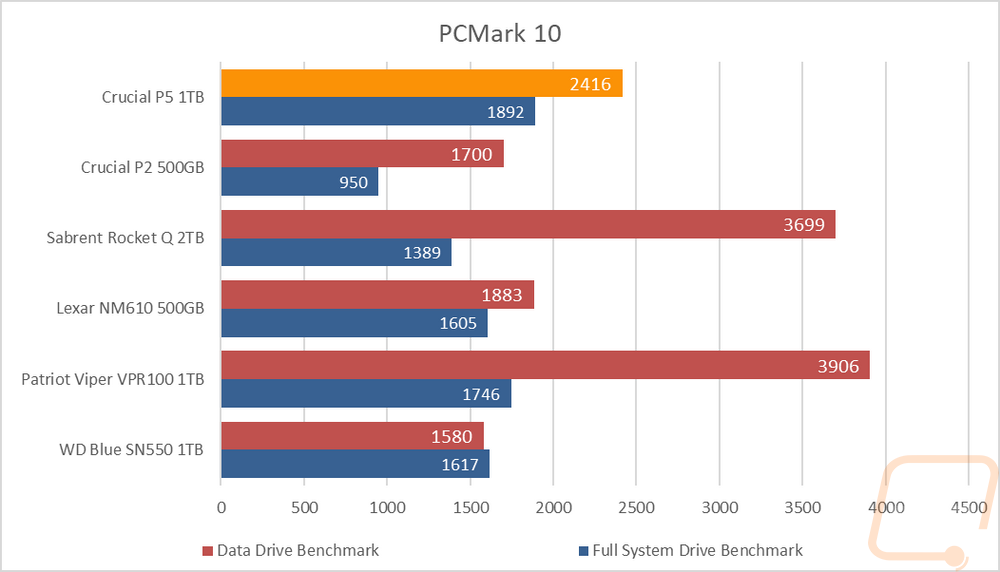 For AS SSD, rather than doing basically the same tests as CrystalDiskMark, I went with the timed file copy test. This copys three different file types and the lower the score the better. I stacked all three because again a well-rounded drive is our goal. The ISO performance wasn’t spectacular, in fact running with some of the mid-range drives like the SN500. However, the program and game files made up the difference being right with the WD Black on the game and even faster on the program files putting the P5 right with the Rocket Q and the SN750 as the fastest tested overall. 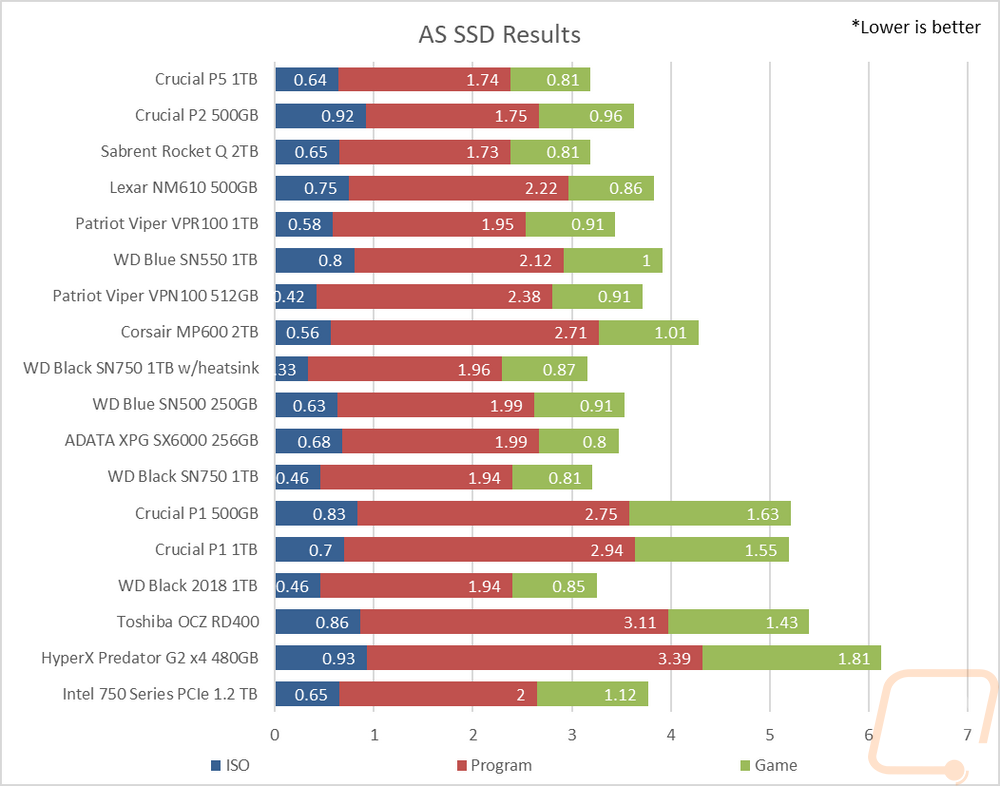 In Passmark Performance Test, I ended up running a few tests on the P5. I ran the standard Disk Mark which runs a few different tests and gives the drive and overall score. For that one it did well, coming in behind the VPR100 and the MP600 but ahead of the SN750 and the Rocket Q that I recently tested. I also ventured into the advanced disk benchmark which has four default settings that look at situations for enterprise use of a drive. The P5 didn’t do as hot here with the webserver and file server tests that were near the P2 and below all of the upper class drives. 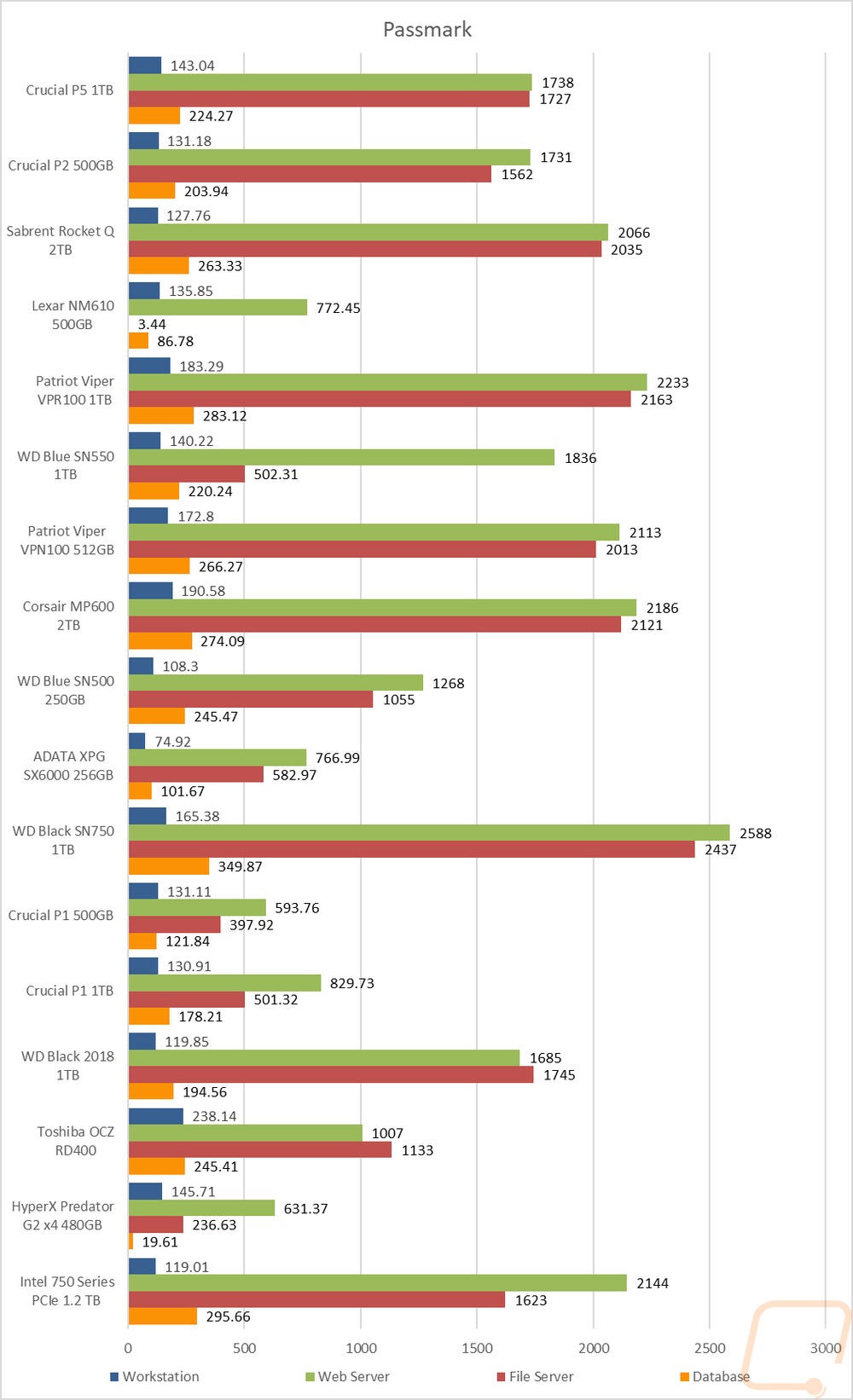 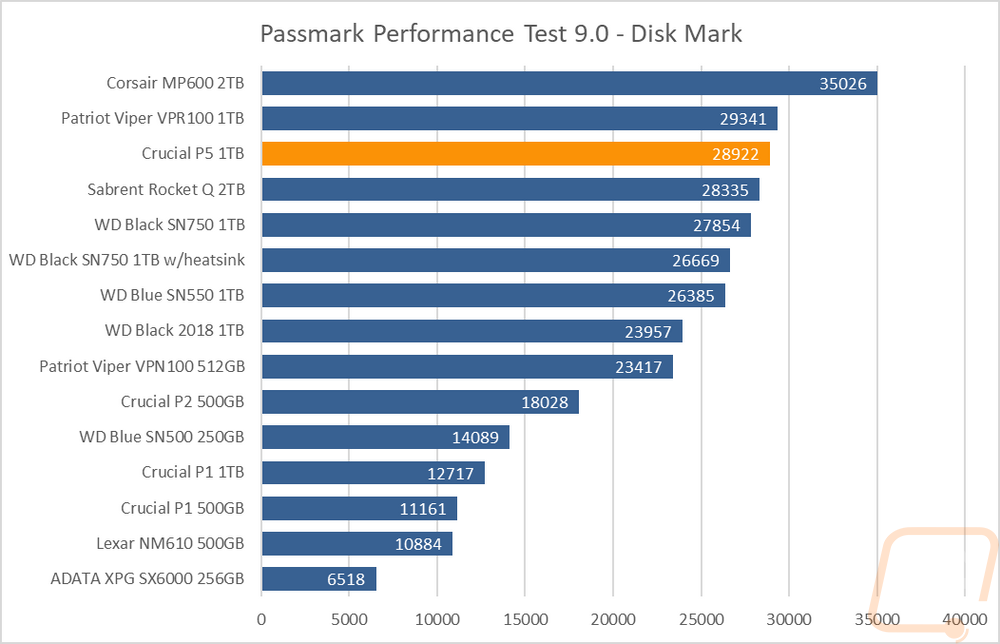 Then using Anvil’s Storage Utilities I ran a 4K queue depth of 16 test for both read and writes to look at IOPS again. The P5 was the fastest drive tested on the reads and the writes weren’t too bad but the write performance on this test put it behind the other higher-end drives both overall and on the write result. 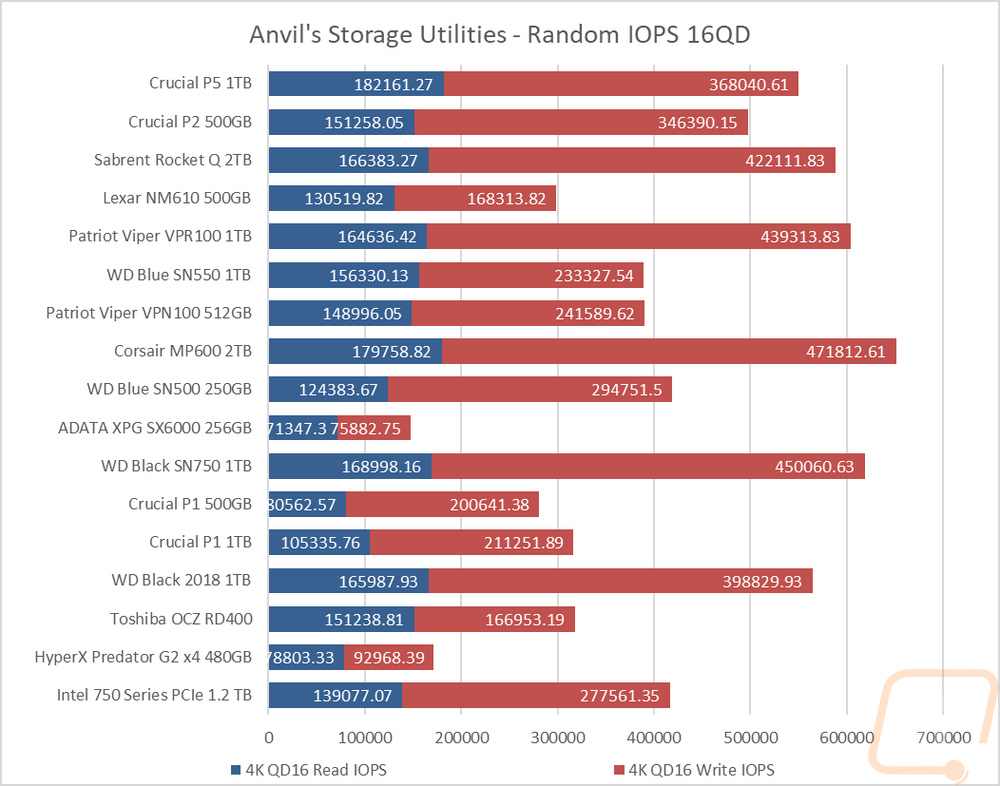 Sticking with Anvil’s I ran a whole series of tests. I wanted to look at how the drive handled different queue depths so I scaled them up over and over again to see the limitations of the new controller. The difference between the P5 and the P2 shows on this one with the P5 being faster across the board. In fact, for the reads, it was in the top three even on the queue depth of 1 test but I especially like not seeing it flatline up top. The SN750 and the VPR100 were both still faster overall though. For the writes, the 1 queue depth result was the other way around, being one of the slowest. Scaling worked well up until the last result where it did drop back off a little. The gap between the P2 and the P5 is huge here as well though with that 1900 vs 784 result at the highest queue depth results. 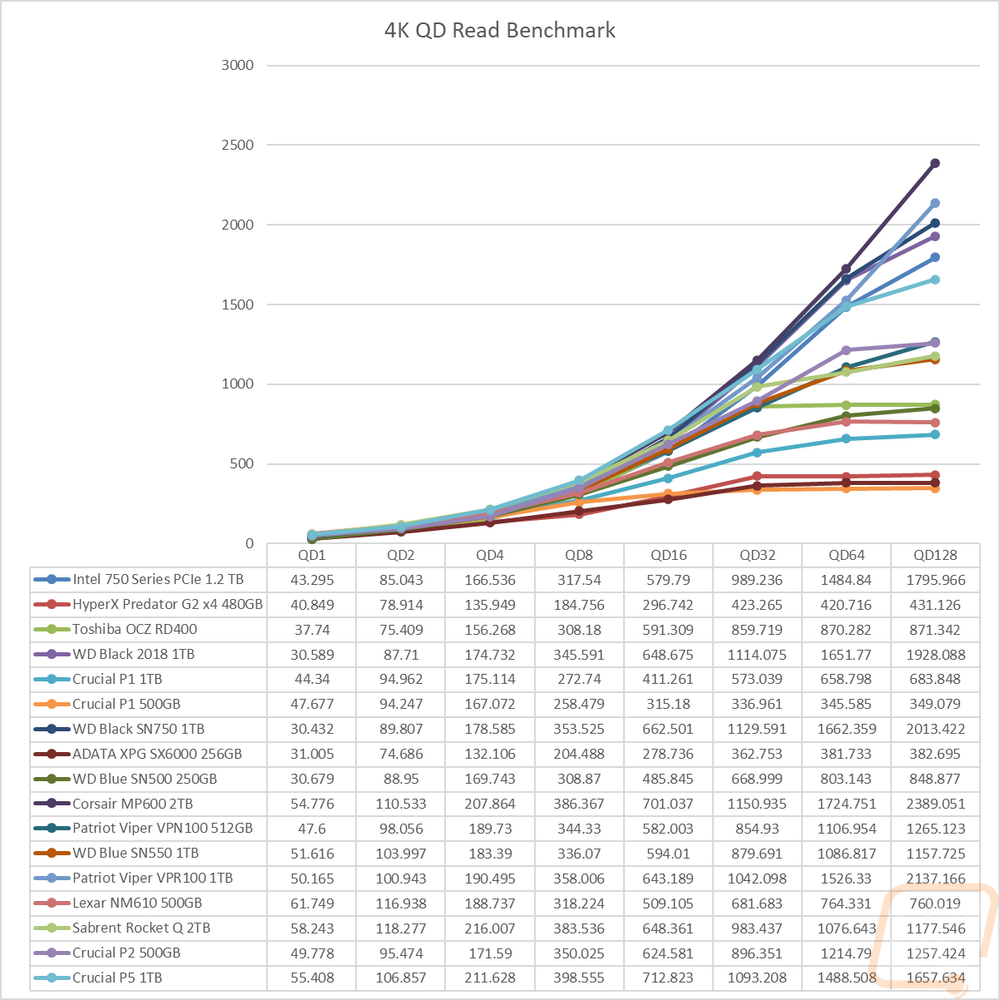 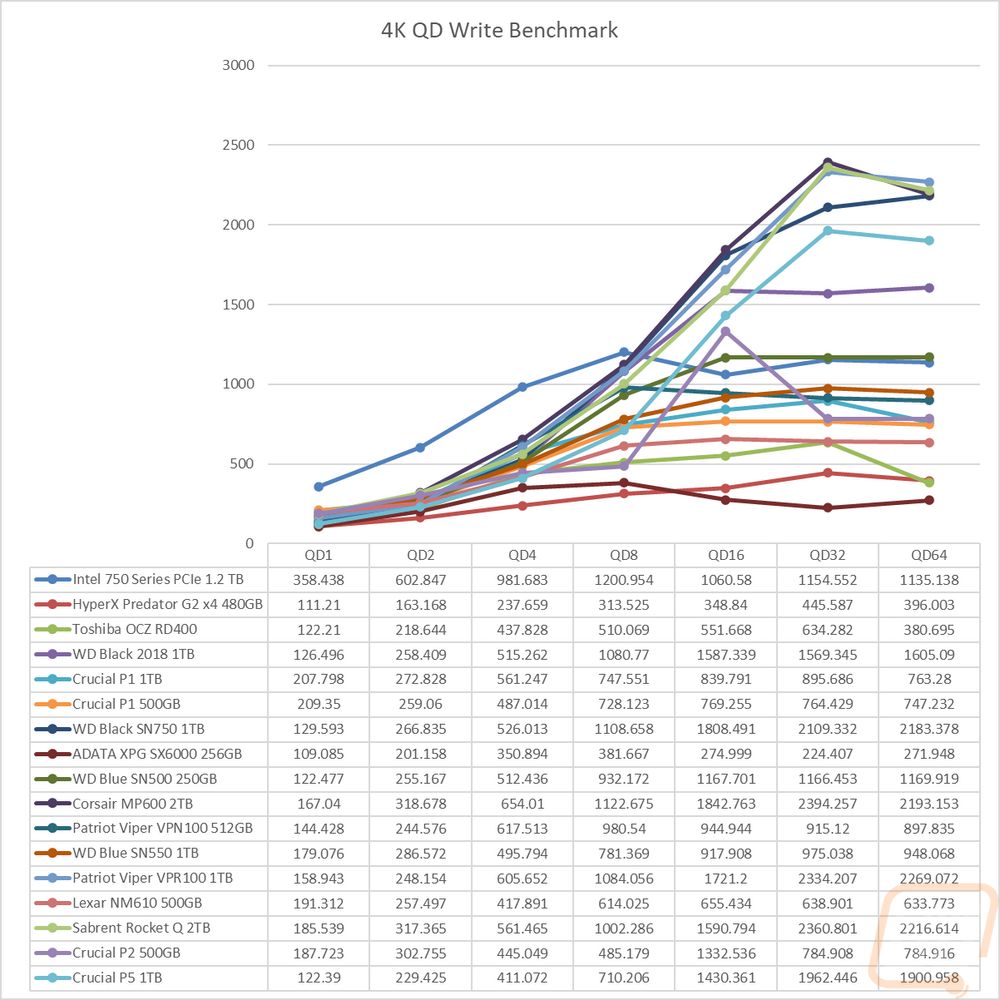 While doing my testing I did also take a look at how the drive handles thermals. As expected the controller is the hottest spot on the drive but the 10c delta between that and the coolest part of the drive is really good. Having the controller out away from the NAND is great as well to help keep those thermals from affecting performance. 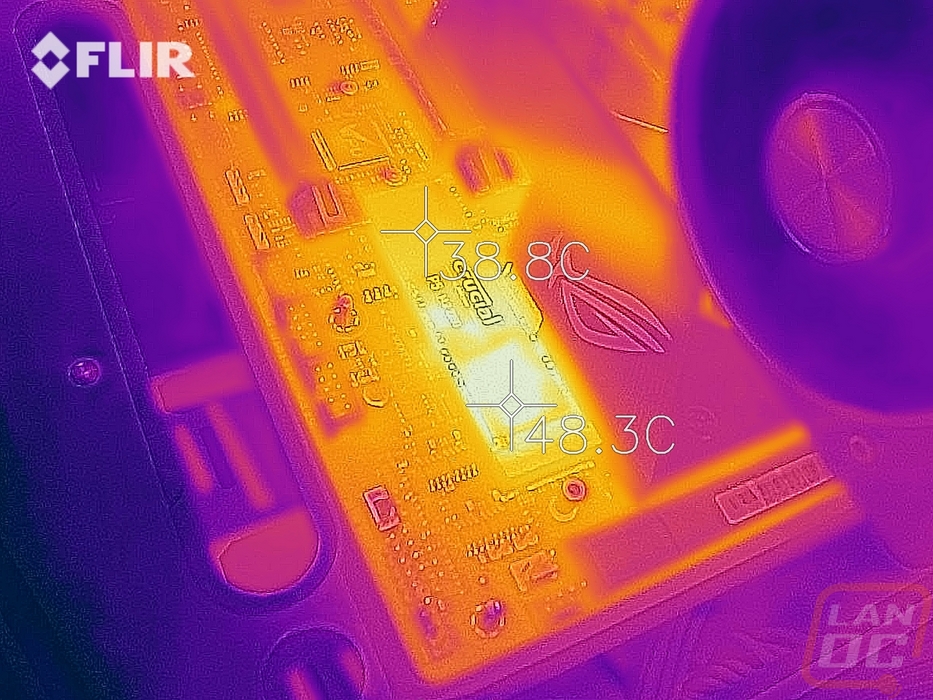 With how long the P1 was around its surprising that Crucial, especially with their parent company being Micron, waited until now to jump into the higher end NVMe drive market. Especially now when people are getting ready for the jump to PCIe 4.0. I would have guessed that they would have skipped a high-end PCIe 3.0 NVMe drive and jump right to PCIe 4.0. Anyhow, the Crucial P5 does fit the bill, especially when you compare it with the P2. The added DRAM back in paired it up with a new Micron in house designed controller and their 96L TLC 3D NAND which is also in house from Micron as well. It’s all on a blacked-out PCB with a proper black sticker cover it all as well which ends up giving the P5 a murdered out look that I like. This looks a lot better than the P1 and P2 which had more of a standard OEM look.

Of course, the drive will most likely be hidden and the performance it what will matter in the end. It does end up right in the mix with the other high-end PCIe 3.0 drives that I have tested. It falls off just slightly in a few of the tests and is never the fastest drive tested. But it is always quick which is exactly what the P5 needed to be.

With the P5 not being at the complete cutting edge it can’t get away with an exorbitant price point, the P5 has to be a good value. Crucial is normally spot on with their pricing, but I was surprised to see that with our 1TB models $179.99 MSRP that it is priced away from the SN750 which has dropped down to the $135 range. The Rocket Q is even lower and even the VPR100 with its cooler and RGB lighting is priced lower at $160 right now. Like I said before, Crucial is normally spot on with their pricing and I wouldn’t be surprised to see this even out after. But I do have to point it out now. The Crucial P5 is a solid drive just waiting on a price that lets it compete with the rest of the competition. 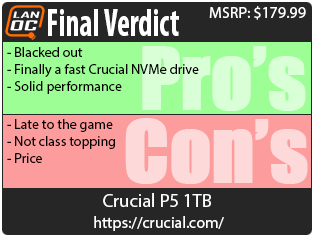 You might call him obsessed or just a hardcore geek. Wes's obsession with gaming hardware and gadgets isn't anything new, he could be found taking things apart even as a child. When not poking around in PC's he can be found playing League of Legends, Awesomenauts, or Civilization 5 or watching a wide variety of TV shows and Movies. A car guy at heart, the same things that draw him into tweaking cars apply when building good looking fast computers. If you are interested in writing for Wes here at LanOC you can reach out to him directly using our contact form.
Discuss this article
Log in to comment
Posts in discussion: Crucial P5 1TB

We have 837 guests and one member online