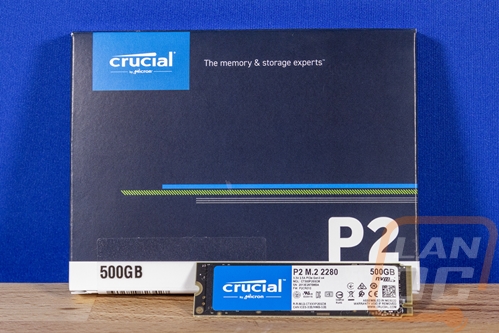 Going in I knew that the Crucial P2 wasn’t going to be breaking records. Just like the Crucial P1, it is designed to be cheap while still offering good performance. Crucial changed the formula up this time around. The P1 was a QLC drive with an SLC cache but the P2 drops the cache and is a TLC drive. The result is significantly faster than the P1 in basically every test I ran. Considering the P1 was still one of the drives I would recommend for someone looking for lower-end NVMe performance a jump in performance is a welcome addition. In fact, with the TLC NAND, it ends up being a lot more well-rounded drive. That is of course other than the weird issue I ran into when doing queue depth tests in Anvils. Not that I would complain about performance being better than it should be.

My main complaint with the P2 however is the capacities that Crucial is offering the drive-in. You can only get it in a 250GB or 500GB version. Those are popular capacities, but a lot of people are starting to look at larger drives and moving ALL of their data to NVMe rather than running an OS and then a game drive and without a 1TB or larger option that just isn’t possible.

As for pricing, the drive is available at around $64.99 which is right near the bottom of what you will find M.2 drives for at the 500GB capacity and just under 13 cents per gigabyte. The original P1 is just a few dollars cheaper at $62.99 and the P2 was significantly faster. The WD Blue SN550 however is also at this same price point and they did trade blows back and forth in our tests. With that in mind, I wouldn’t call this a steal, undercutting the SN550 would help with that. But even priced together the P2 offers another good option especially with its 5-year warranty for a budget build. 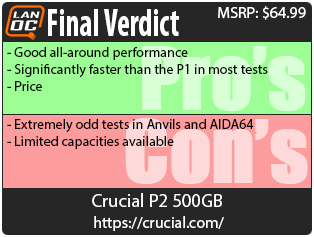 You might call him obsessed or just a hardcore geek. Wes's obsession with gaming hardware and gadgets isn't anything new, he could be found taking things apart even as a child. When not poking around in PC's he can be found playing League of Legends, Awesomenauts, or Civilization 5 or watching a wide variety of TV shows and Movies. A car guy at heart, the same things that draw him into tweaking cars apply when building good looking fast computers. If you are interested in writing for Wes here at LanOC you can reach out to him directly using our contact form.
Discuss this article
Log in to comment
Posts in discussion: Crucial P2 500GB

We have 575 guests and one member online