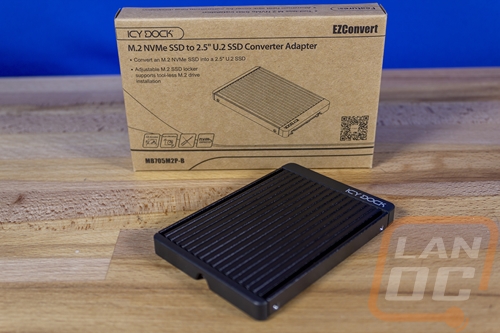 Icy Dock has always impressed me with how they manage to come up with creative and easy to use tool-less enclosures and products and this time around isn’t any different. The MB705M2P-B is really easy to install your M.2 drive into it and because it is the same form factor as a 2.5-inch drive it also means it will fit in almost any build, including servers. The built-in aluminum heatsink also did a good job pulling heat away from the drives in my testing. Which isn’t always needed, but is a nice side benefit. Especially with it being focused on higher-end NVMe drives that run warmer.

The idea of the MB705M2P-B, in general, is really interesting as well. It can take a U.2 plug and open up the option for an additional M.2 drive. At NVMe speeds even! I’ve had multiple builds where I wish I could have added another M.2 slot. One of the downsides is that you also will need to get the cable as well unless you are using the MB705M2P-B as a way to add an M.2 into a U.2 based server. U.2, in general, was more popular in server applications so that use case is actually more likely than you might think. Which brings me to the main downside to this adapter. While useful, consumer motherboards with U.2 ports have mostly been exclusive to higher-end boards like the X299 chipset that I tested on. Newer boards and the most popular options have moved away from the connection type because there haven’t been many U.2 drives available. I can’t hold it against Icy Dock or the product, but as cool as this is, I suspect the number of people who can put it to use will be shrinking. At least on the consumer side.

That said, if you DO have a U.2 port and you have run out of M.2 slots. This is a perfect option for adding additional fast storage. The EZConvert NVMe M.2 to U.2 MB705M2P-B will run you around $34 on amazon and when compared to the (limited) competition that price is around the same. The EZConvert NVMe M.2 to U.2 MB705M2P-B, however, has a proper case, not just a bare PCB like a few of those and its toolless design is extremely easy to use. 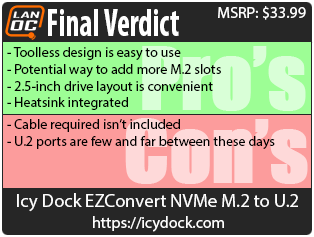 You might call him obsessed or just a hardcore geek. Wes's obsession with gaming hardware and gadgets isn't anything new, he could be found taking things apart even as a child. When not poking around in PC's he can be found playing League of Legends, Awesomenauts, or Civilization 5 or watching a wide variety of TV shows and Movies. A car guy at heart, the same things that draw him into tweaking cars apply when building good looking fast computers. If you are interested in writing for Wes here at LanOC you can reach out to him directly using our contact form.
Discuss this article
Log in to comment
Posts in discussion: Icy Dock EZConvert NVMe M.2 to U.2 MB705M2P-B