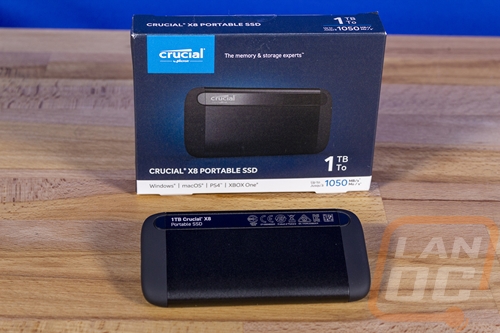 For performance testing, I had a few different areas that I wanted to check out on the Crucial X8. I expanded our portable SSD testing slightly as well as went with the tests I have always included. But first I did take a look at the drive using CrystalDiskInfo. So Crucial, being part of Micron did at least hide the drive information with a new model name when it is scanned. Often when an external drive is scanned it just shows the model for the original drive. But the firmware listed clues us into the magic behind the X8. The P3CR013 firmware is the July 23rd release for the Crucial P1 M.2 drive. This isn’t a big shocker, I expected the X8 to be the P1. I had the chance to test the P1 back in December of 2018 and have been extremely happy using the drives as well.  CDI also tells us that the drive is running via UASP or USB Attached SCSI Protocol. 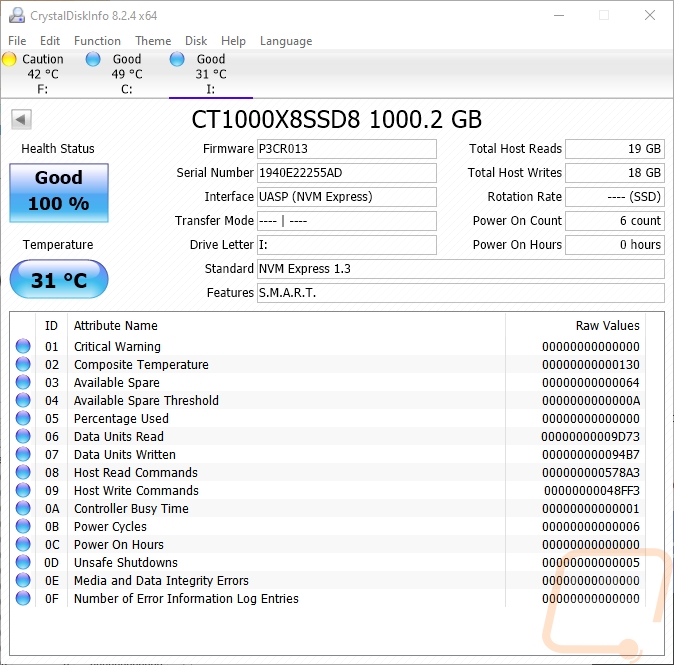 For my first benchmark, I used CrystalDiskMark to check out the sequential performance. I did run both the older version I have been using for a while now and the new CDM 7. The older version runs a higher 32 queue depth with one thread for the first results were CDM 7 does 8 queue with 1 thread and you cans ee the performance difference between the two. The second result with a queue depth of 1 and 1 thread is also not bad at 853.61 MB/s read and 847.88 write. Overall comparing the CDM 6 results with our older SanDisk and WD portable SSD results the X8 is significantly faster. 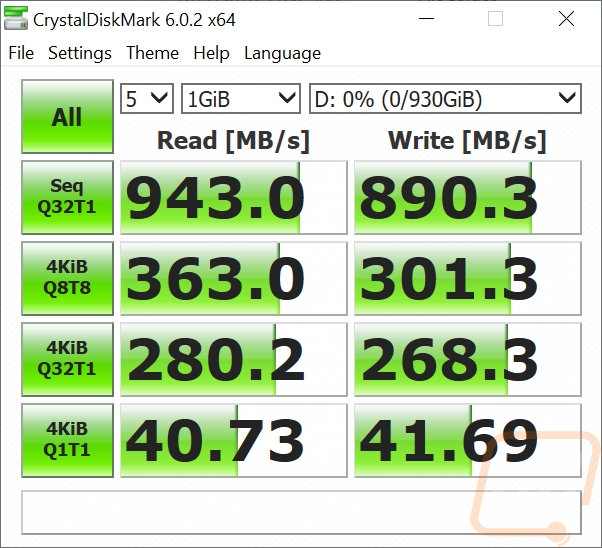 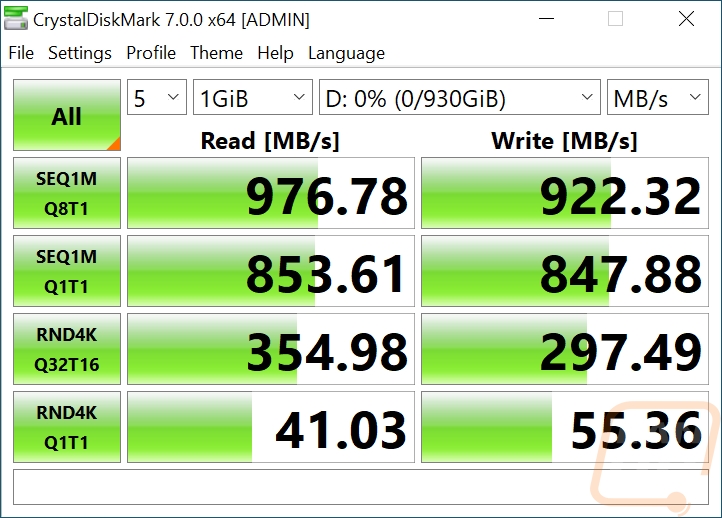 Anvil’s Storage Utilities shows sequential numbers up in the high 800’s for read speeds and 744 for write. But I was mostly interested in the QD16 IOPS which have read IOPS at 70489 and write IOPS at 51035. Comparing this with the SanDisk which was similar on read IOPS but was extremely low on write IOPS at 2444 shows just how fast the X8 is. 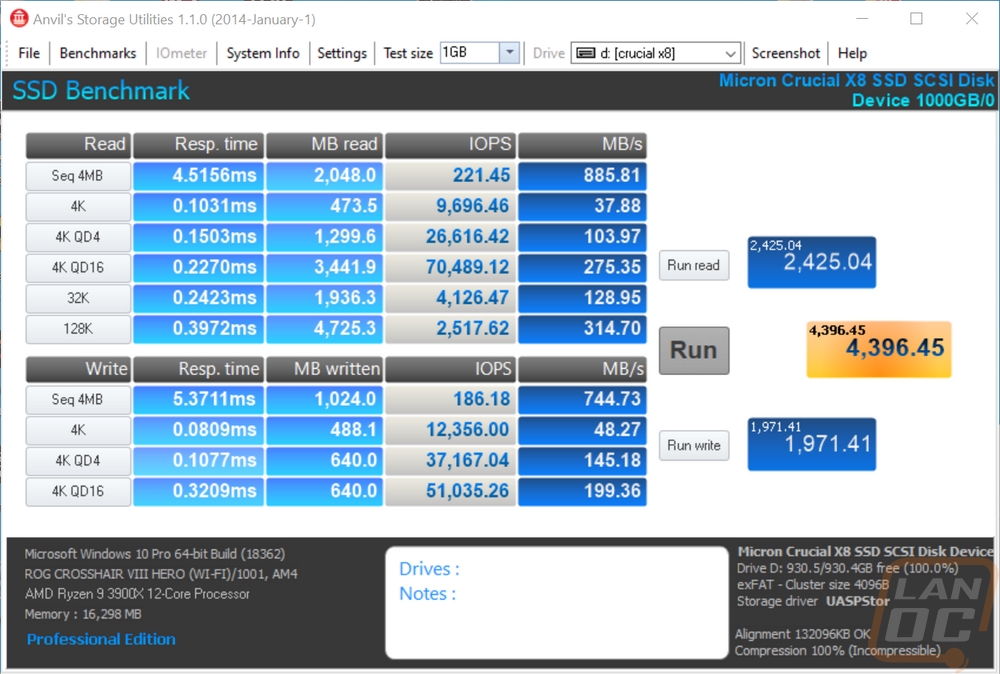 For ATTO which I don’t always use, I added it back to our test suite and have both the Bytes per second numbers and the IOPS as well. You can see on the transfer speeds that results cap out around 512 KB file size and do very well on anything larger than that with write speeds around 880 MB/s and read speeds at 930 MB/s. The IOPS, on the other hand, are highest on the low end peaking at 31000 write and 29600 for read. 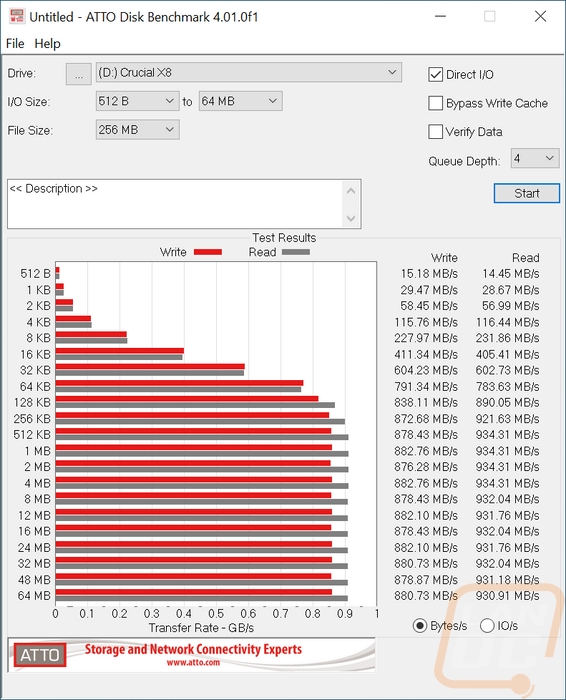 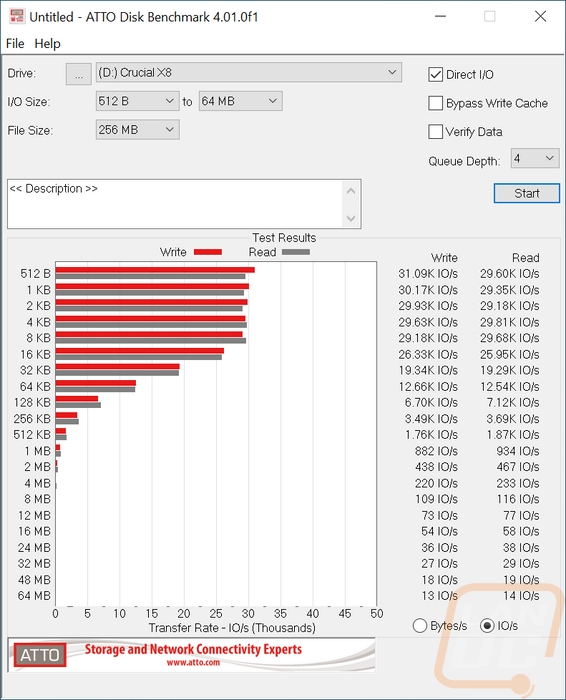 I think my favorite tests are the real-world tests. I do a total of 6 using three different file types. I transfer a folder filled with word documents, a folder filled with RAW and JOG images, and then a folder with a 9/10GB movie file. I test transferring to the X8 and also from the X8 back to our PC which btw is sporting a new Gen4 PCIe SSD. The word documents are by far the slowest with them going to the X8 at 411 KB/s and from the drive at 571 KB/s, this is about what you would experience with any folder filled with lots of small files. Photos are also small, but a lot larger than the word documents and it shows the transfer speeds. I saw 179 MB/s when writing to the X8 with a few big dips which might be when the image sizes got smaller (I transferred our review photo folders which have RAW, then edited jpgs, and then compressed and watermarked JPGs). Reading from the drive and copying to the PC things sped up to around 283 MB/s at times with a portion of the transfer lower. Then the last transfers were with the movie file where I saw a hard cap of 599 MB/s when writing to the X8 and a consistent 791 MB/s reading and moving back to the PC. The WD Passport SSD, on the other hand, wrote a similar movie at 362 MB/s and the SanDisk did 195 MB/s to the drive and 421 MB/s back to the PC. Both of those drives were fast, but the Crucial X8 is significantly quicker though I do think the small document transfers for the SanDisk were faster at 4 MB/s write and 6 MB/s read. 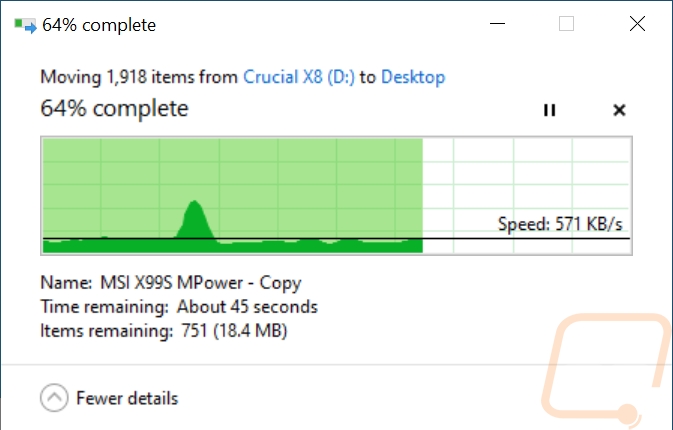 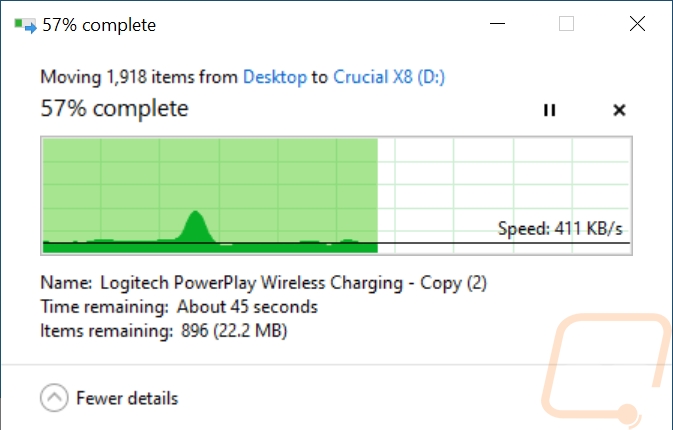 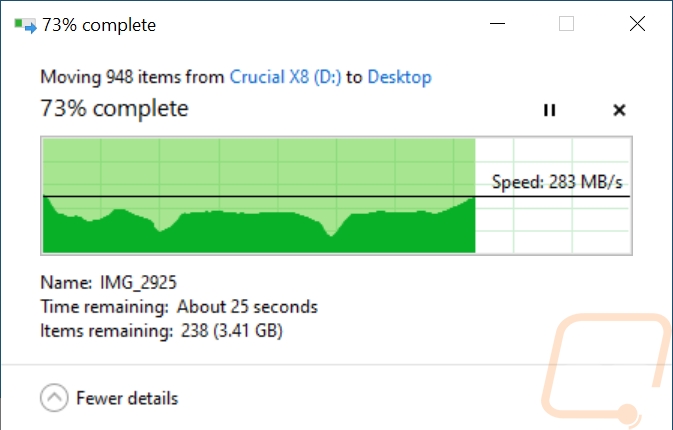 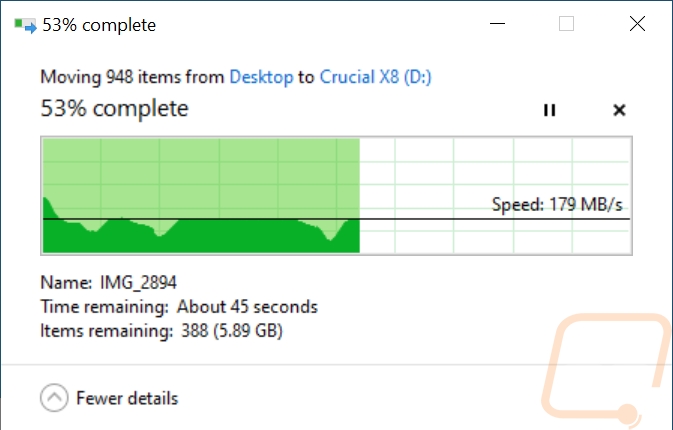 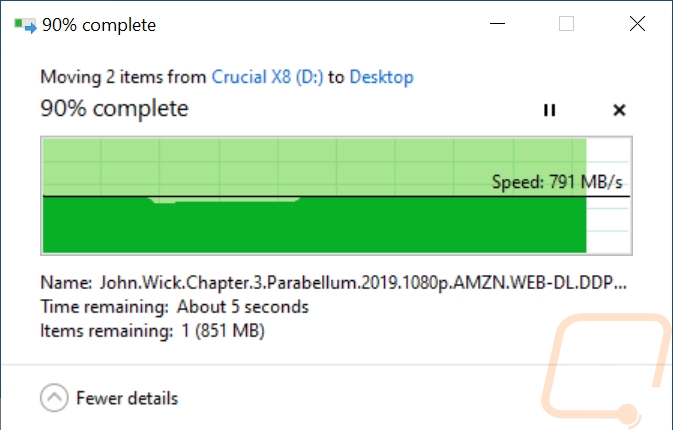 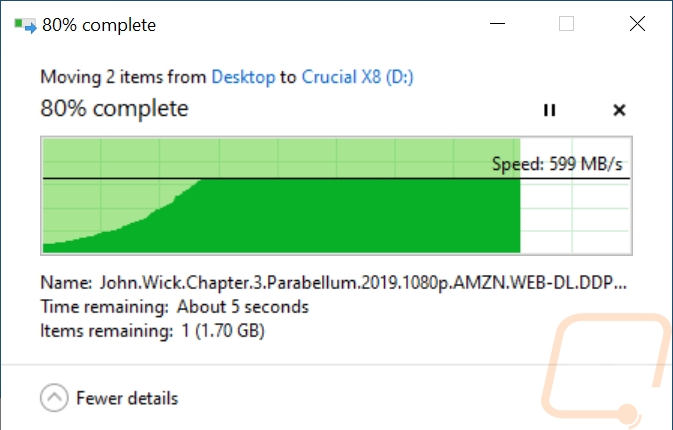 I saved the most demanding benchmarks for last. These were done using AIDA64’s built-in disk benchmark. I ran a full 100% read speed test that tests the entire size of the drive There was a small initial dip down to 790 MB/s but the drive was very consistent from there on at between 902 and 892 MB/s. Now the write test is the extra demanding one, it overwrites the entire drive in one action over time and you can see it took 149 minutes in total. For the first 32% of the drive it was solid in the 800 MB/s range. After that it did reach the end of the SLC cache on the drive and you can see a constant up and down motion where it would drop all the way down to 89.2 MB/s. This is a little concerning, but this situation would only come up if you are writing over 320 gigs to the drive all at once, as long as you keep your single transfers under that you will always get that high-end SSD performance. But it is important to keep in mind, the X8 does have at least one limitation. 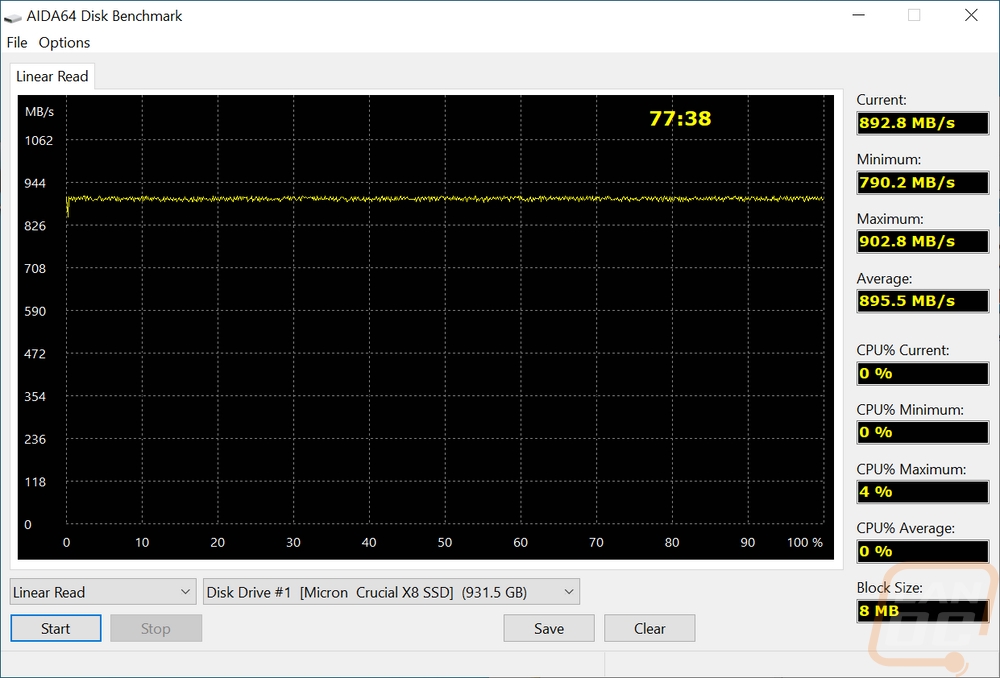 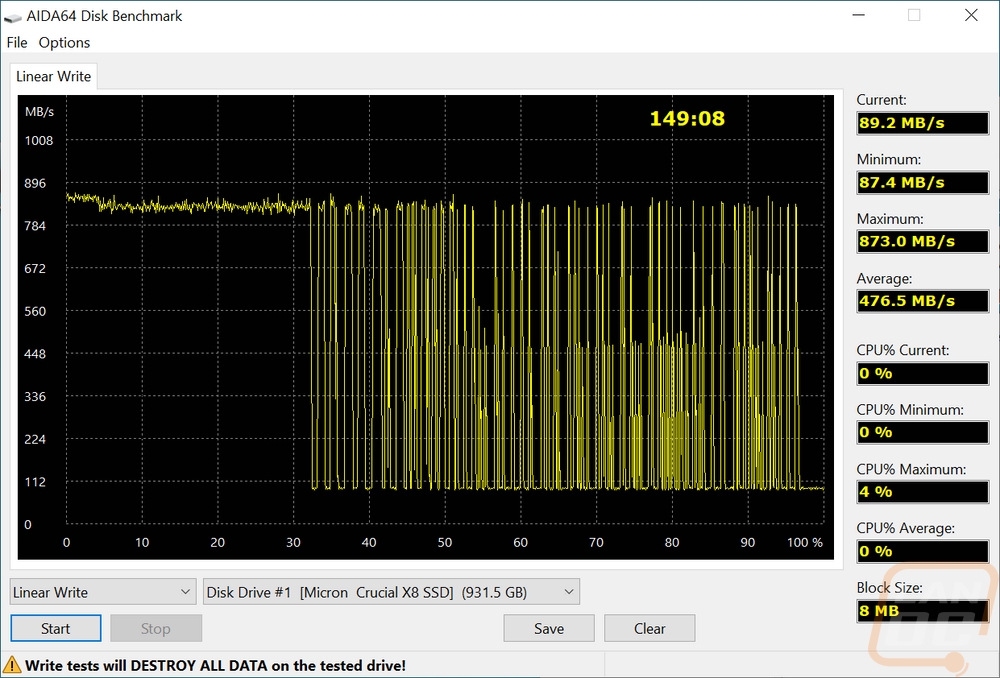