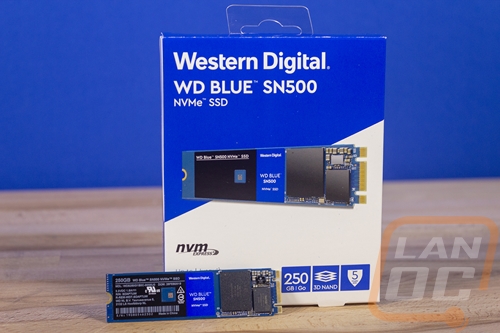 One thing I love about Western Digital is that they have been extremely consistent with their branding. They put together a few simple brands based on their colors and even now you know exactly what to expect based on those. The packaging for the WD Blue SN500 is no different, you have the blue covering the top half of the box. They also did a nice job of sticking with their new naming with the SN500 name. They introduced this with their new Black drive after the two previous Black NVMe SSDs had the same name and were confusing when both were still available for sale in some places. The SN500 designation shows that it is a lower end drive than the SN750 and also leaves room for future WD Blue drives. The rest of the packaging is focused on the large picture of the drive in the middle. WD also makes sure to highlight the capacity on the front, in our case this is the 250GB drive as well as showing that this reaches up to 1700 MB/s read speeds. The 5-year warranty is also there with a small badge as well. Around on the back, there isn’t much going on. They did include a window that shows the drive inside, this allows the serial number to be scanned if needed and lets you confirm that the drive is in the box. M.2 drives are small and you can barely tell when the box is full or empty. 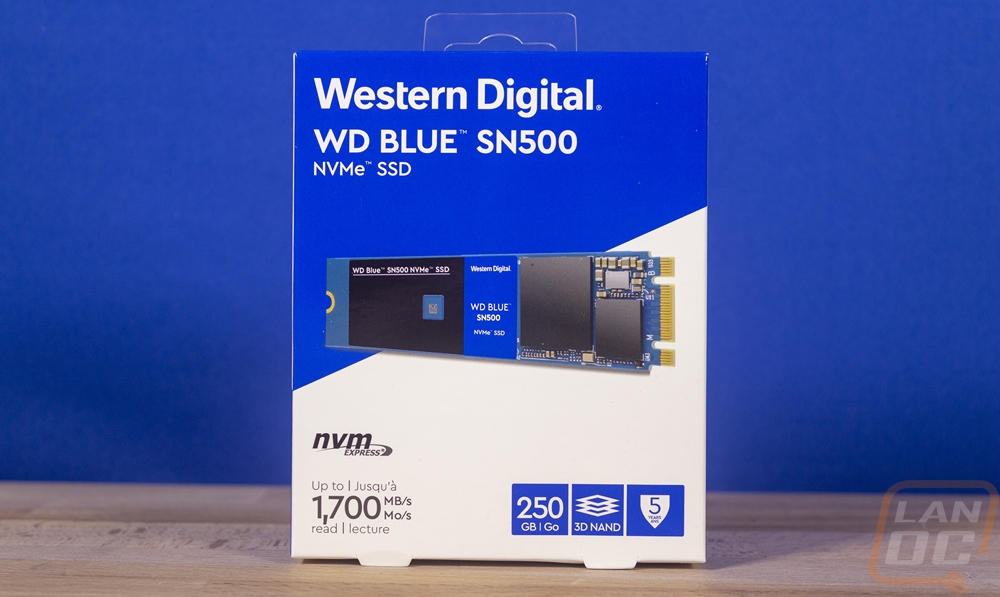 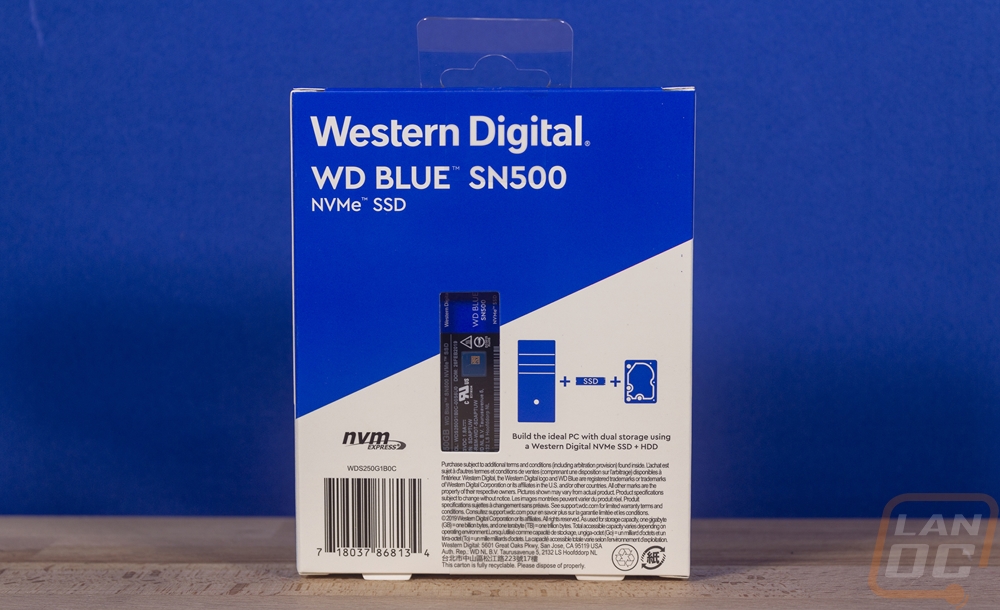 Inside the box, you will find the M.2 drive in a two-piece clamshell tray that keeps it in the center and protected somewhat from damage. Up under it they also include a small technical support and warranty guide with details on how to handle any issues with your drive. 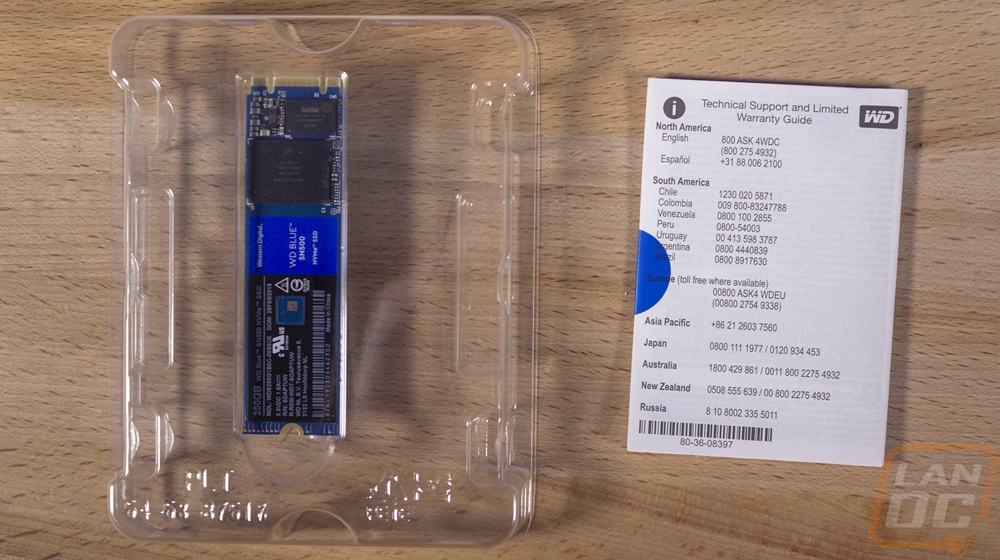 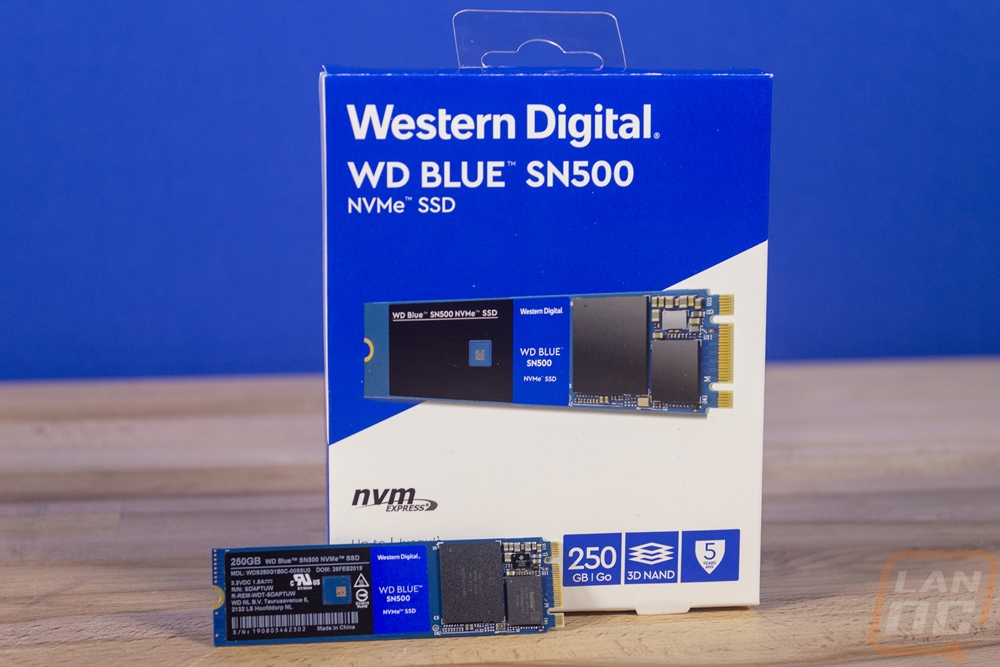 So the WD Blue SN500 really shows just how far things have come. Not long ago an M.2 drive with a 250GB or 500GB capacity like this drive would fill both sides of the full drive. But you can see that most of this drive is just filler PCB to fit in the M.2 2280 form factor that has quickly become the standard for M.2 even though shorter lengths are available. The left side of the top of the drive has a sticker that has the serial number and barcode and all of the normal details. That includes the model name and capacity, model number, voltage, and of course the certification logos as well. Next to that on the same sticker that has that bright blue and the model logo. The PCB itself is also blue, but slightly off from that signature blue.

So all of the drive is packed into the small space at the end on the top of the drive so let's take a closer look at what the WD Blue SN500 has to offer. The largest component is the Sandisk branded NAND flash memory chip on the left. This has a 05561 designation with a 256GB capacity next to it. We know this as a 64 layer 3D TLC NAND. The Black SN750 had a similar NAND that was just 1 digital off at 05560 but I’ve seen photos of some of the SN750’s with the 05561. The 256GB capacity shows that this 250GB drive has a 6GB buffer to account for future NAND wear. The SN500 is a DRAMless drive so there is no memory chip to be found. The controller is also an in-house design with a 20-82-007010 designation on it. The drive and controller are running PCIe Hen 3 x2 where the Black SN750 runs at x4 so right from the start there are some limitations, but this is a budget focused drive. The rest of the drive is mostly filled with small capacitors for power loss protection.

The back of the WD Blue SN500 really cements how small the actual drive is. They didn’t even have to resort to hiding a second NAND around on the back. This does, however, limit its capacity to what can fit on one NAND chip and right now the drive is only available in a 250GB model and a 500GB model. They did put the rest of the certification logos here on the back where they don’t mess with the looks of the surprisingly simple but good looking drive. I’m surprised at how much I like the looks of this drive without the need for a heatspreader.