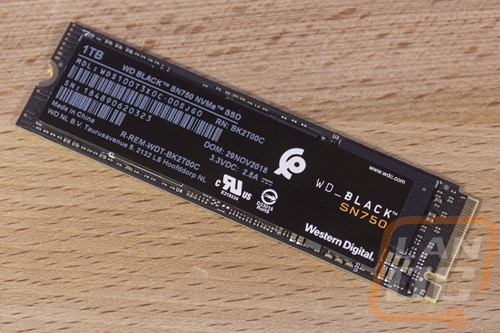 Before jumping into testing, I did want to address the different models of the WD Black SN750 that are available. The SN750 is going to be available in 250GB, 500GB, 1TB, and 2TB. Today for launch the 2TB model is not available, it is estimated to be coming out in February. Then on top of that, there are all of those same capacities that will be available with a heatsink as well once that comes out, right now they just have that listed as Spring. Today I am testing the 1TB model. Keep in mind that the capacity does play a role in the speeds. For example on read speeds, the 500GB and 1TB both have the same read speed listed (in sequential performance not random), but the 1TB has a faster write speed and both are faster than the 250GB and 2TB models. I’ve also got a copy of the CrystalDiskInfo below to document the firmware version that I tested with. 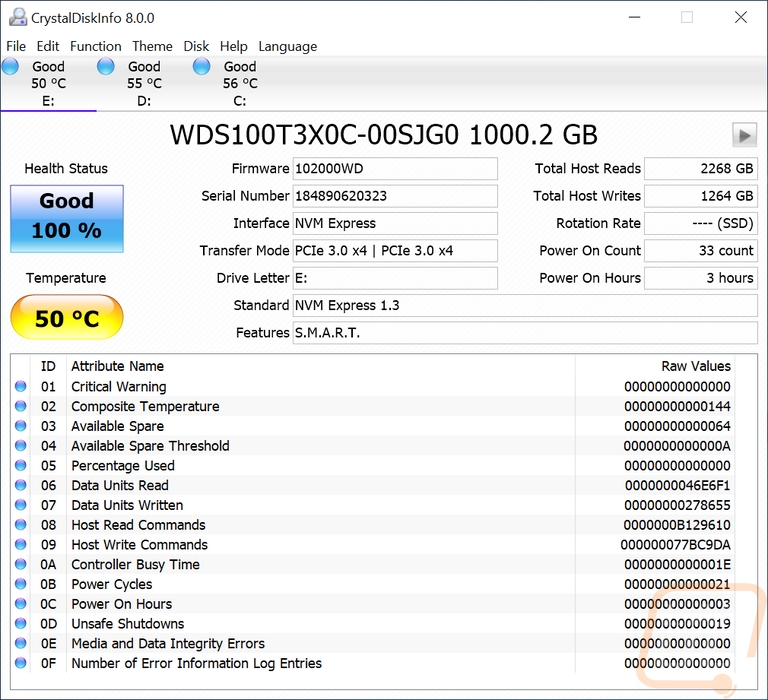 To start off the testing I went with what everyone loves to see, sequential read and write performance. For this, I went with CrystalDiskMark. The read results put the SN750 basically tied with last years model. The results for the 2018 model are a little higher than they advertised and at 3435MB/s the SN750 is just a touch below the 3475 that they estimated. Both are normal, but go to show you that there is some variation in testing as well as in drives themselves and the gap between last year and this year's drives is very close. That is to be expected though considering they both use the same controller and NAND with firmware updates being the main source of improvements. As for the write performance, well they did manage to improve things here going from 2800MB/s up to 3017MB/s, a nice jump on what was already good performance.

Rather than retest the same thing again in AS SSD, I really like the copy benchmark in AS SSD which copies three different file types and times them. I’ve combined all three results together to get a more overall picture of performance. You can see that both of the WD drives are very fast but the SN750 gained a little in game file transfer times to be just slightly faster.

Next in Passmark’s Performance Test 9 I ran a few different tests. Using their advanced disk benchmark I ran a few business use simulations which try to replicate the file types you might see in business use. Both Web Server and File Server tests showed a big jump over the WD Black 2018 but all four results showed a similar results, those two just look more impressive when compared next to the others. I also tested using their built-in Disk Mark test which tests sequential read and writes as well as random seek and rewrite performance to put together an overall score. Given the big jump, we saw before in sequential writes it wasn’t a surprise that the SN750 model jumped up well ahead of last years model and faster than the other drives tested. 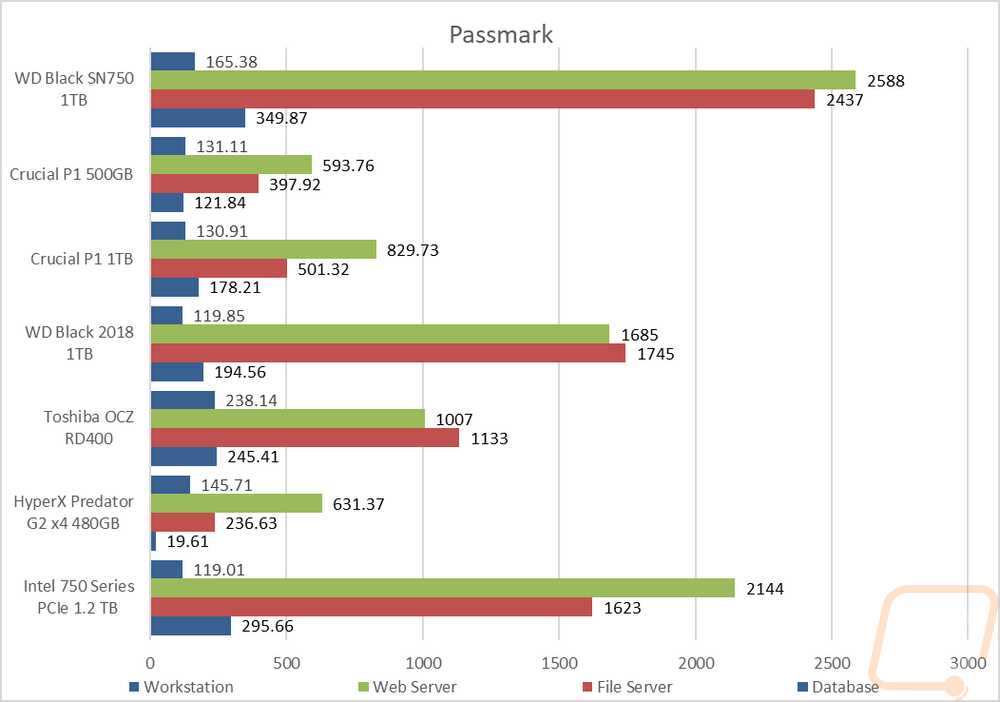 For random read and write performance, I did two tests. I took a look at the results in Anvil’s Storage Utility with both read and write at a queue depth of 16. The WD Black SN750 performed similarly to the 2018 WD Black in read IOPS here but its write IOPS really jumped up from 398,829 to 450,060. But I also added in another test for random IOPS performance. I went back to CrystalDiskMark and took a look at random IOPS with their 8 queue depth in 8 threads test. This is similar to the Anvil test but with 8 tests run at the same time to. Here you can see that the random read IOPS jump up significantly over the other test. The WD Black SN750 is a little faster here on reads and much faster on writes.

My last benchmarks were back in Anvil’s Storage Utility where I wanted to look at random read and write transfer rates at different queue depth levels. Here I started at 1 and doubled up the queue depth over and over. For read performance, all of the drives start in the same range and both of the WD Black drives are lower at the start but catch up at a queue depth of 2 and then really get rolling from there. Both WD Drives stick with each other up until the last test at a queue depth of 128 where the new WD Black SN750 pulls ahead. With writes, things are a little different. For starters, the Intel 750 series is much faster at the low queue depths here. Both WD Black drives are slower once again early on but you can see at a queue depth of 8 they jump away from the other drives. We can also see where WD made improvements with the write performance. Both drivers were closer in performance until the higher queue depths were the SN750 pulled ahead and the 2018 model actually drops in performance slightly. 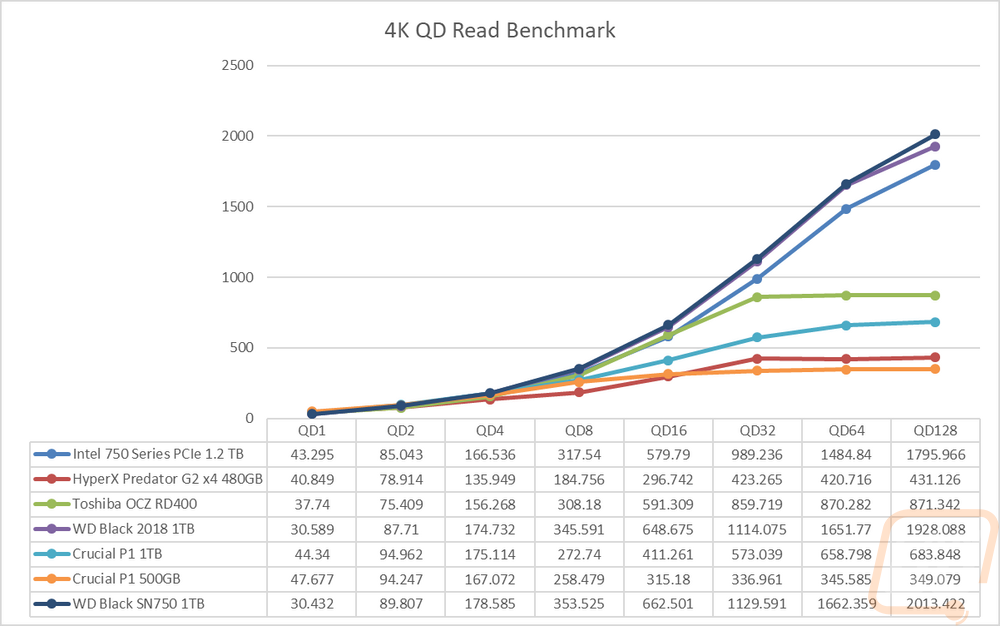 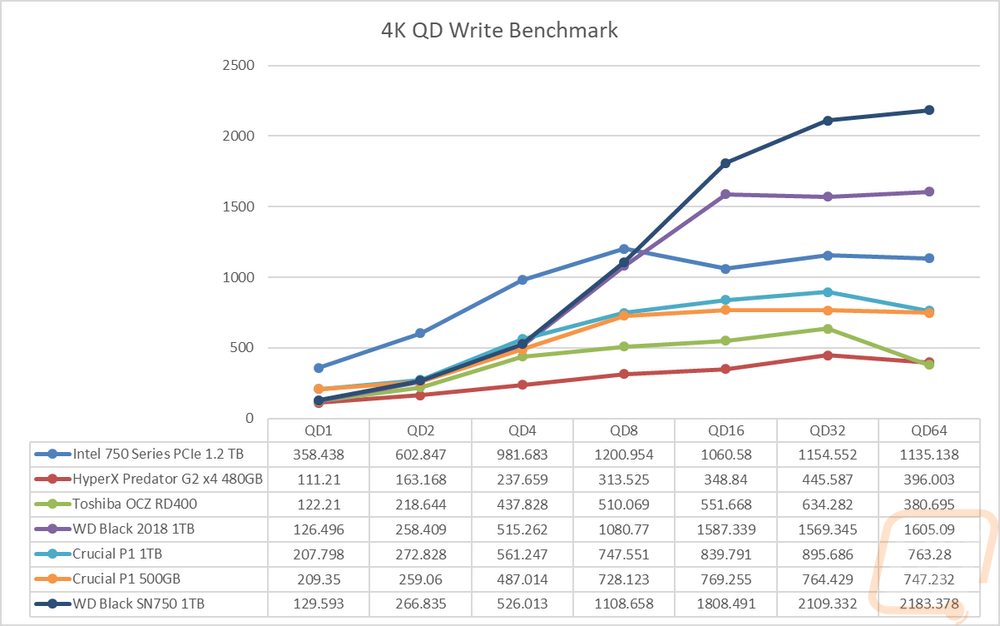 While testing I couldn’t ignore thermals. I ran the AIDA64 Stress Test on the SSD and got the thermal camera out to take a look. It wasn’t a big surprise that the controller was what was creating most of the heat. There was a little from the NAND and some on the DRAM but the controller was running 144.6F when under that load for a while. I wouldn’t consider this extremely hot, but it will be interesting to see how the heatsink model changes things. 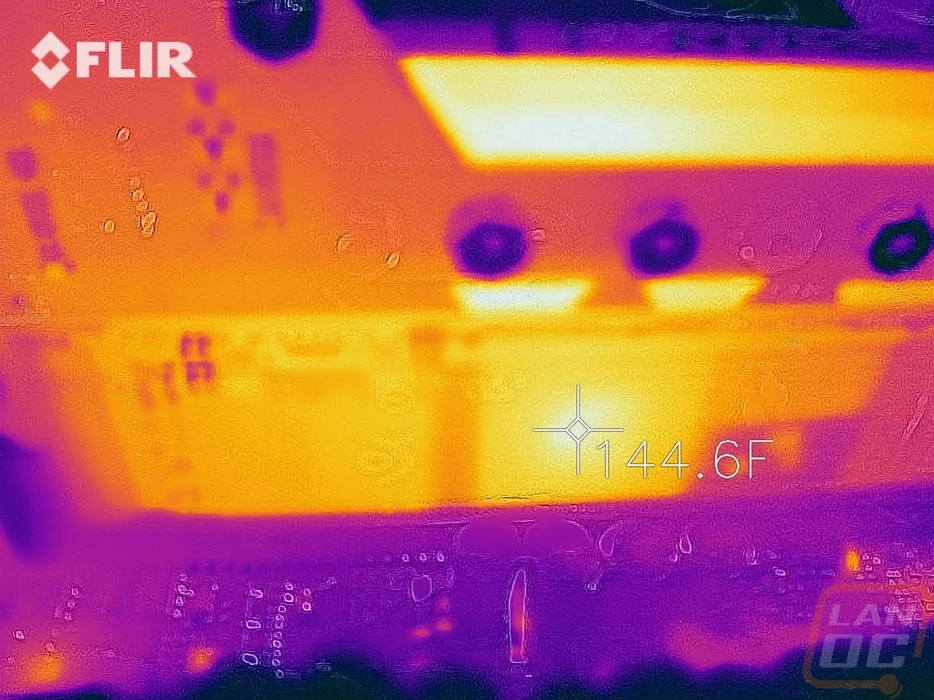 Beyond all of the normal performance aspects, WD like a lot of the big names in SSDs does have software for their drive. With the new WD Black launch, WD has also updated their software to also reflect the new “gaming” focused look. In other words, their software now will recognize that you have the WD Black and switch to a black theme. So I wanted to take a quick look at their dashboard software and see what all it does.

So as you can see it does have that black with grey and more grey look. The landing page is the status tab and this lists off a lot of good info right out of the hole. You can see your capacity, in our case the drive was empty when I did this. It also lists the volumes and shows how full those are. That is different than your capacity btw. Capacity is the total drive, but volumes means partitions, in this case, I had just the one. They have a life meter bar that gives you an idea of how the drive life is and next to that they show the current temperature. Then next to that you can see the current connection as well as what the drive is capable of. This is huge in my opinion because some M.2 drives only have x2 PCIe lanes and this will let you know if you are connected slower than what the drive needs. 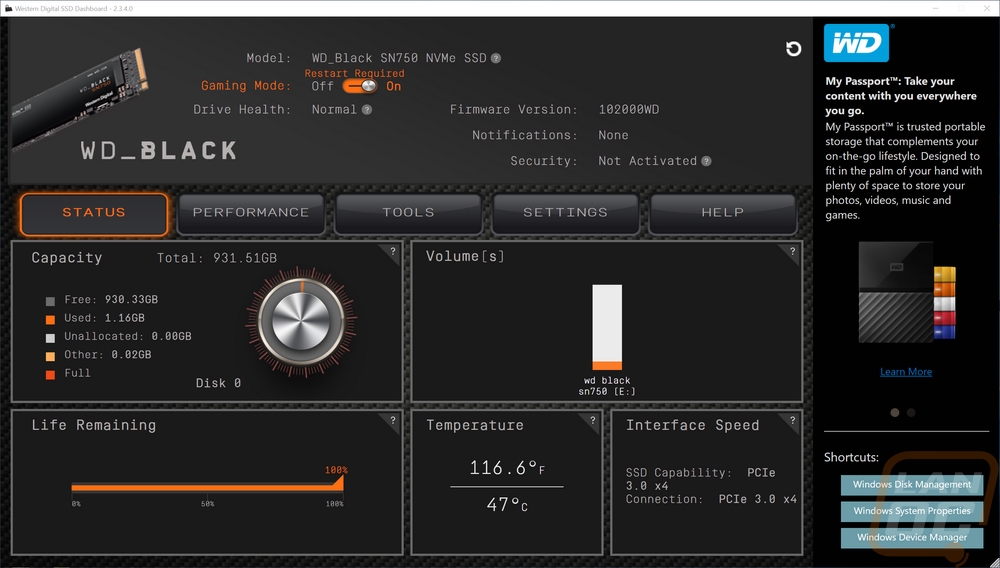 The next tab is a performance monitor that just shows transfer speeds and IOPS in real time. You can also use a link to open up windows performance monitor. That have similar shortcuts on the right on every page for other useful tools. Speaking of things that are on every page. Up top, you have the model name and a photo of the drive. With that, they show you any notifications and your firmware version. Then there is an orange Gaming Mode switch. Gaming mode turns off the low power state (PS4). The idea behind this is games which might not pull anything from the drive for a while won’t need as much time when they suddenly need to load another level or a new part of the map. 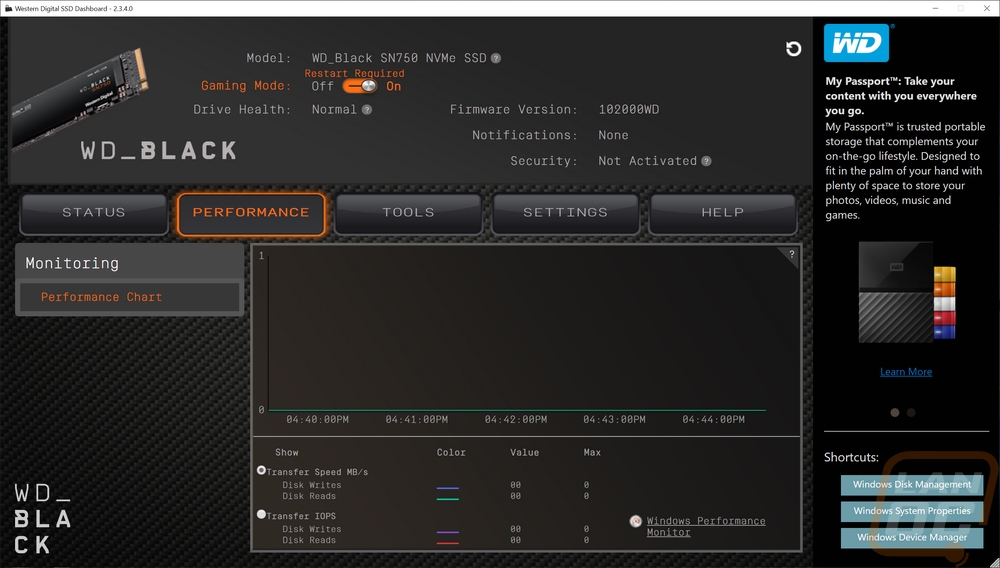 The tools tab has a few different options over on the left. The first one is the firmware update tab where you can check for them or using the drop down option to upload your own. There is a drive erase tool if you need to clear off the entire drive. Then from there, you can dive into the S.M.A.R.T information and other drive details. Most of which is what you would find using CrystalDiskMark, but all bundled into their one program. 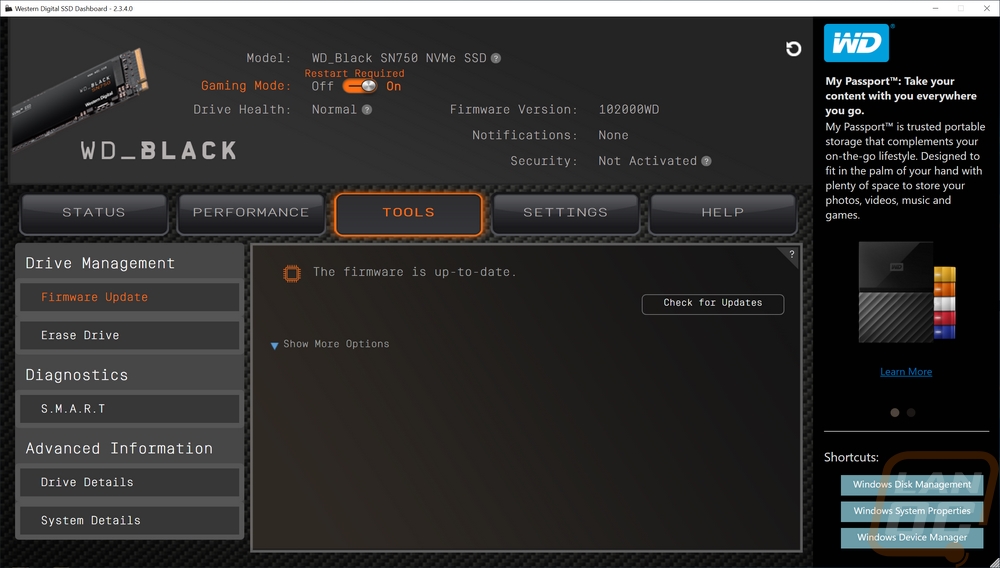 The last tab other than help which is self-explanatory is the settings page. This is where you can click to check for an update to the dashboard software. You can also get into the options to let the program know if you want it to boot when windows starts. 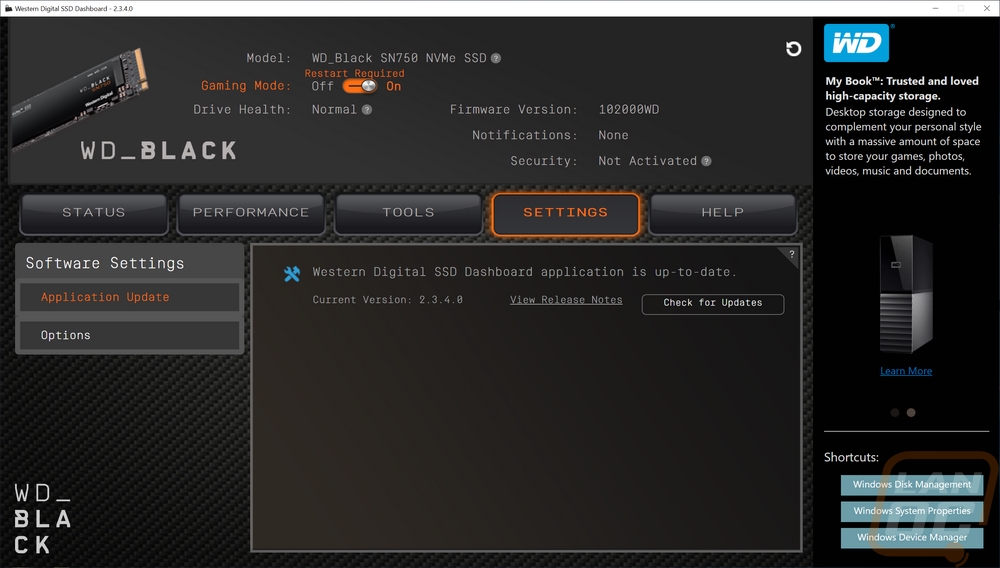 We have 1112 guests and one member online