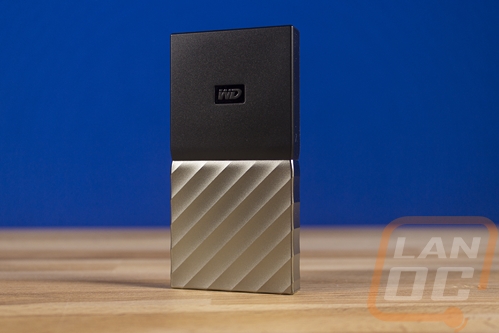 With the My Passport SSD being an SSD I had high expectations right from the beginning but where I was surprised was really how portable the drive is. This isn’t much smaller than two thin thumb drives put together or a money clip. The drive ends up being small enough to keep in your pocket if needed or tucked away in a small pouch in your laptop bag. When I moved to using an Ultrabook years ago from lugging around a gaming laptop when traveling I also set out to keep the number of things in my laptop bag smaller and each accessory smaller. The My Passport SSD fits that same thought process and helps keep my bag portable while giving me four times the capacity of my Blade Stealth. While it's not really important in the end, I also love how this drive looks. Going with Type-C is future looking and perfect for today's new laptops while also including a very small adapter to switch to a normal USB connection for everything else. I shouldn’t have to mention the drive is also extremely fast, with read and write speeds reaching 500 MB/s and real world testing showing 362 MB/s as well.

Really the main downsides to me were with the inclusion of a cord. A drive with a flip out USB plug that plugs in or a cord that stays attached to the drive and wraps up would be simple to take with you. Having to make sure you bring the admittingly thick cord can be a little more troublesome, especially when you need to have that adapter with you. A small bag would have been nice. Lucky for me I will be keeping the drive in my laptop bag when transporting it.

I was initially a little surprised by the $399.99 retail price for the drive but after looking around at other SSD based external drives with a 1TB capacity I think WD got this right. There are some cheaper, but those drives are all packing in standard SATA drives in larger cases, this drive is very small and portable not to mention the speed. The smaller capacities drop down to $199.99 for the 512GB and $99.99 for the 256GB so the pricing in linear as well. Now if you are just using this drive with one PC or laptop, a 1TB SSD would be cheaper to install. But the portability makes that extra cost well worth it. 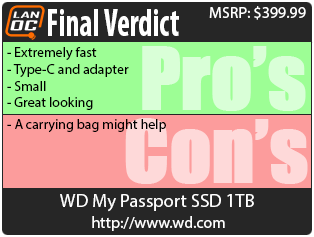 You might call him obsessed or just a hardcore geek. Wes's obsession with gaming hardware and gadgets isn't anything new, he could be found taking things apart even as a child. When not poking around in PC's he can be found playing League of Legends, Awesomenauts, or Civilization 5 or watching a wide variety of TV shows and Movies. A car guy at heart, the same things that draw him into tweaking cars apply when building good looking fast computers. If you are interested in writing for Wes here at LanOC you can reach out to him directly using our contact form.
Discuss this article
Log in to comment
Posts in discussion: WD My Passport SSD 1TB

We have 1399 guests and one member online